this is the basic outline story dirction of the GH:Resurrection mod, the games maps and gameplay will attempt to realise this storys basic pathway. 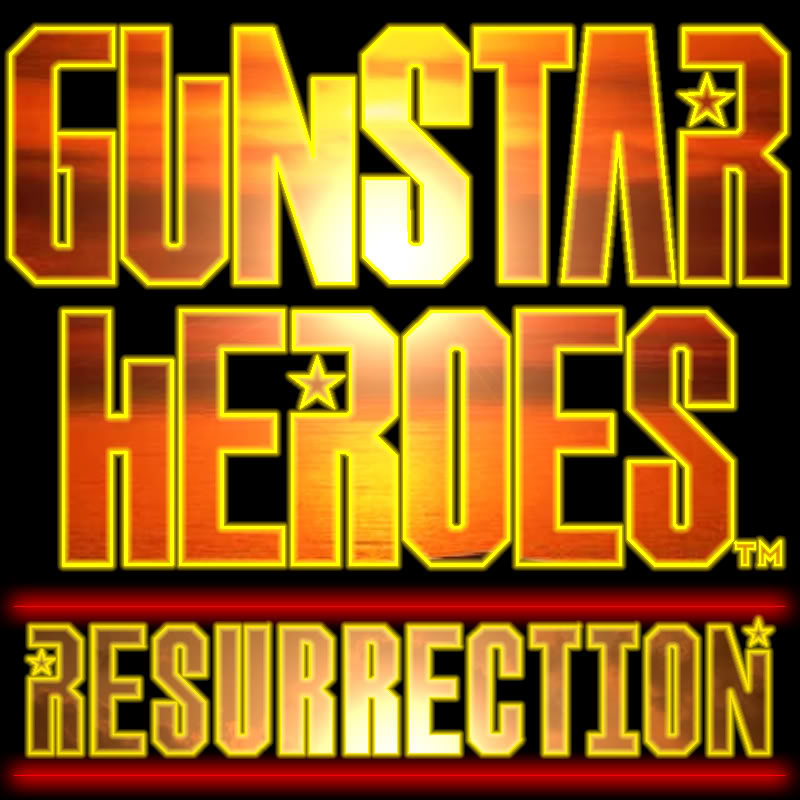 
Resurrection takes the story element of Gunstar heroes and puts it more in the foreground, with everything in the mod being designed on a narrative basis, things aren't just randomly thrown in unless it fits into the story element, which i will upload at some point for any of you avid readers out there.

Red and Blue are returning to G-9 after their victory over the empire and Goldensilver, only they discover that Goldensilver is infact, still alive. Almost just a shell of his former appearance he manages to catch the 2 heroes off guard inside their shuttlecraft. Goldensilver takes over the minds of our 2 previous heroes unknown to anybody else. They proceed to the Gunstar's main operations base known as "Armadillo" and set fire to The Core, a massive generator beneath the base. coincidently the empire are looming around the base and decide to attack using the commotion they pick up via radio as their cue to move in. In the midst of all the chaos the other characters are scrambling around trying to figure out what is happening, the order is eventually given to evacuate the base, and the Core goes nova, destroying the entire region.

After this happens Goldensilver sends his children down to the planet to soften it up for his arrival. the children are what remained of the four power gems, now embodied in robot shells.

Alioto is the authority figure of the Gem Siblings.. Acting almost like a mother to her brother and sisters, especially Miko. She gained high wisdom and clarity of vision from Golden Silver, enabling her for the most part to maintain order amongst her siblings; she worries about Miko's condition and keeps her constantly in view. She is the largest of the four, standing quite tall off the ground at roughly 7 foot. she has natural anti gravity abilities as the Chaser Gem that enables her to suspend herself and other objects effortlessly and solidly in the air.

She is kind hearted but strict. Keeping the sanctity of life constantly in her siblings minds, telling her brother and sisters that only those that must be killed in order for their 'father' to be happy should be killed, wanting to spare as many lives as she can. Alioto tries to teach this more to Ruks and Satoa, as she knows Miko already understands the value of life and wouldn't purposely go out of her way to harm Innocent beings

Satoa was born from the few pieces of the Lightning Gem that were left after Blue and Red defeated Golden Silver inside the Empire Mother-ship. Unlike his ‘father' Goldensilver Satoa knows no patience, gaining the human attribute of Impatience and Anger from him. These magnified by the remains of the Lightning Gem makes him rush headlong into battle without fear of consequence to himself or anything around him, always the first to either follow an order or to give one, which ever one comes first.
If Satoa's around things need to be done the moment they are said. Not before and definitely not after. He prefers to work alone meaning he does not have to wait on anybody only following his own orders. Violent electric storms inside him means he is always on the offensive and combined with his human attributes make her very unpredictable but very unstable.

Ruks was born from the shattered remains of the Force Gem and Golden Silvers inner powers. Believes herself to be a heroine, and much like her ‘father' believes herself to be serving humanity, saving the people of earth from themselves. She gained human attributes from Golden silver that make her selfish and spoiled these are magnified many times by the Force Gem within her making Ruks extremely arrogant and almost unable to listen to reason.

Miko was born from the remains of the Fire Gem and Golden Silvers inner powers. The fire Gem she was born from suffered the most damage during the ‘final' battle between Golden Silver and the Gunstars. Very few pieces of the her Gem remained after it shattered along with the others. Golden Silver, realising mankind's long engraved connection to and primal fear of Fire, knew his plans would be seriously under threat if the Gem of Fire wasn't resurrected successfully, she has the greatest amount of his power but ended up with the least desire to kill because the personalities the Gems gain from him are random, this surprised Goldensilver the most, he didn't realise he still contained such feelings. Miko is comparatively weak when compared immediately to her 'siblings', as they can use their powers at will and without thinking, however Miko has to really concentrate to use her abilities, tends to sleep alot because of the weakened Gem within her. Miko is delicate and gentle in nature, receiving the Human Emotion of Joy from her ‘father' she is constantly guided by her sister Alioto.
Miko inside, is terrified of herself, because the moment she uses an uncertain amount of her power she is immediately consumed by it, and falls into a strange trance like state, all Miko can see once this happens is intense unrelenting flames, she appears isolated, alone and frightened surrounded only by fire and the sounds of all the people being killed by her in reality, this state can be induced accidentally if she gazes at a sun set or fire for even a short length of time, making her the most dangerous of all the Gems siblings.

During the course of time, the gems are defeated one by one, and thus Alioto being the leader she decided that for the siblings to fulfil their fathers wish and get the planet ready for him, the gems would have to act as one being. With this in mind she sets off to find the other gems and forces them to fuse with her. because of the vast differences in both the Gem power and the Gem personality when Alioto fuses with Ruks her clear and patience mind is shattered, overwhelmed by the power and Hate the force bestows upon her, transforming not only her mind, but her physical appearance and strength, she quickly searches for the others but is no longer interested in her father's goal.

After forcing a fusion on Satoa she becomes even more arrogant and uncontrollable, deciding that Goldensilver is far too weak to deserve a place in the universe, let alone as their father and ruler. this new monster, known only as Qstar took off into space and destroyed Goldensilver once and for all, the explosion could be seen from the ground on earth. after Red and Blue have been defeated they are carried aboard the empire "Arc" mothership by Green and yellow as they escape the self destruct sequence of an top secret underground docking hangar. (as seen in the posted mission 6 mock-up video) in space Gunstar are attempting to crush the empire with the help of the last remaining Gem sibling, Miko. Hexamarines and Decimarines board the ship on every deck. Qstar tears her way into the ship, because each gem is almost immune to certain weapons, there is only 1 remaining weapon that can harm Qstar, and that is Fire, after fighting with the evil machine it eventually fuses with Miko completing its transformation essentially becoming invincible.

The final battle is fought in the Arc Core chamber, a hopeless fight ensues for the Gunstars against the godlike machine, the fire fight beings to cause the core to malfunction. Indigo somewhere else on the ship reverses the polarity of the Core field and this sucks Qstar and your weapons too it like a magnet, the pull is so intense that the machine is trapped motionless screaming and howling, the ship begins to implode in on itself Yellow Green Red and Blue run for the hangar as White and the military are preparing to leave the ship, they board the dropships in the nick of time and escape with a few miner drone clinging onto the outside, the core goes supernova and ends the tyranny that is Qstar, and the Empire.

The missions will follow this plots basic path, "start here, get to here and end the game" however there will be many interesting missions along the way, as the Gunstars take the fight back to the Empire, raiding their drone factories, aircraft production facilities, etc. A Crazy casino mission based on Blacks' Dice Palace from the original game title has been planned, also vehicle driven missions will be in the cards too. and hopefully it will make for a great 2.5D gaming experience to remember.

If you are interested in mapping for GH:Resurrection, please send me a Personal message.