Post news RSS Stendhal 1.17: Water from above and below

The release of version 1.17 adds a global weather system, visible swords and clubs during fights as well as a new medicinal ring among other changes

After some time spent on playing hide and seek with a well known bunny, Stendhal 1.17: Water from above and below adds lots of new features. 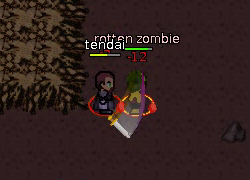 If you attack your opponents with a sword or club, the weapon will now be visible during the fight because of an improve melee combat system. 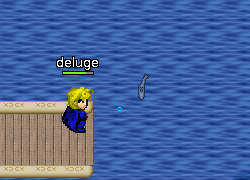 There are fish in the ocean near Ados city. If you look carefully, you can see them jump out of the water. Or just get a fishing rod to increase your food supply.

Various graphics have been reworked, most notable are the animated flames in the Wizard Tower as well the corpse of Bone Dragons.

The snow during this Christmas season was a harbinger for the new weather system. Now there are real and dynamic weather effects all around the world. It may start to rain. If it is hot outside, you may even hear thunder. But if it is too cold, the rain will turn into snow.
The weather depends on various parameters, for example it is more likely to snow high up in the mountains than on the Caribbean beach.

Last but not least

There have been improvements to quest rewards regarding both Karma and items.

In the Stendhal client, the indication of a new chat message is more visible now and Ctrl+Shift+left/right can be used to quickly change between chat tabs. On very old computers, performance can be improved by disabling the weather layer.

Stendhal is a fun and friendly 2D multiplayer online roleplaying game with and old-school feeling. It is completely free and open source (client, server, everything). You can meet hundreds of NPCs, who will ask you to protect land or people from danger, feed the hungry, heal the sick, make someone happy, solve a puzzle, play a game or simply lend a hand. You can fight scary monsters or explore the world. Stendhal was awarded Project of the Month by SourceForge as part of the Arianne project in March 2010.