This update consists of three parts. In the first part we describe the types of the solar systems that can be encountered within the game. In the second part we give a few details about the space combat and space combat AI and in the third part we reveal some elements concerning the traveling between various solar systems or within those.

This update consists of three parts.

In the first part we describe the types of the solar systems that can be encountered within the game.
In the second part we give a few details about the space combat and space combat AI and finally in the third part we reveal some elements concerning the traveling between various solar systems or within those.

The types of solar systems that are currently implemented are the following: 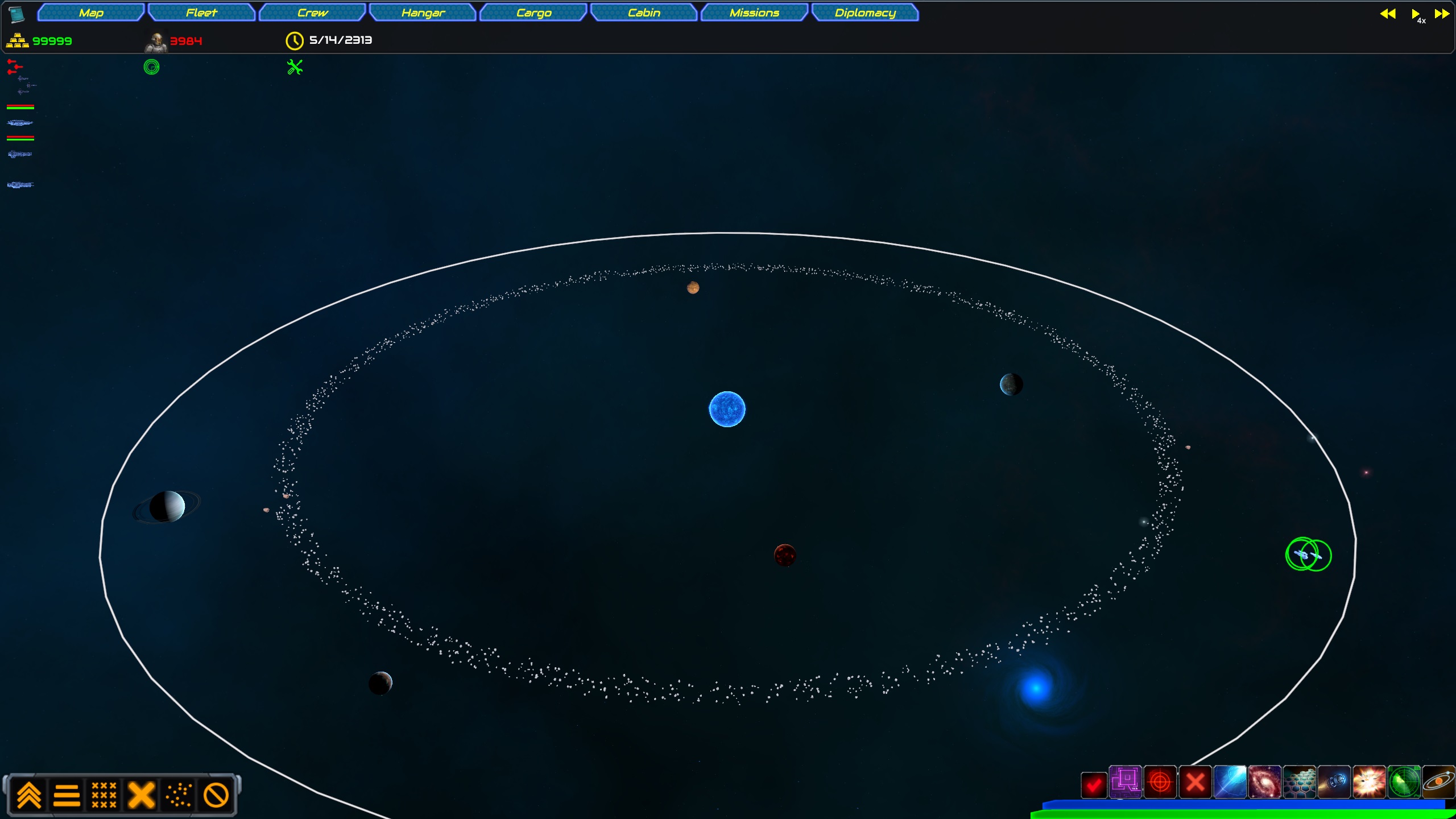 The most common type of solar system. Usually it contains a handful of planets and an asteroid field with resources that can be mined if the right component is present in one of your spaceships. Alternatively you can use your might to rob the harvester ships that are mining these resources for the benefit of the dominant faction of this solar system.

Some of the planets in this type of solar system are inhabited. If your relation with the faction that inhabits the planets is friendly or neutral you can put your fleet into orbit around these planets and make trade, receive missions or retrofit your fleet.

The planets and asteroids that are not inhabited can be explored if your fleet possesses a probe launcher and at least one exploration probe. Quite often in your journeys and if you have strong enough sensors you will find artifacts that can also be explored with an exploration probe as well. 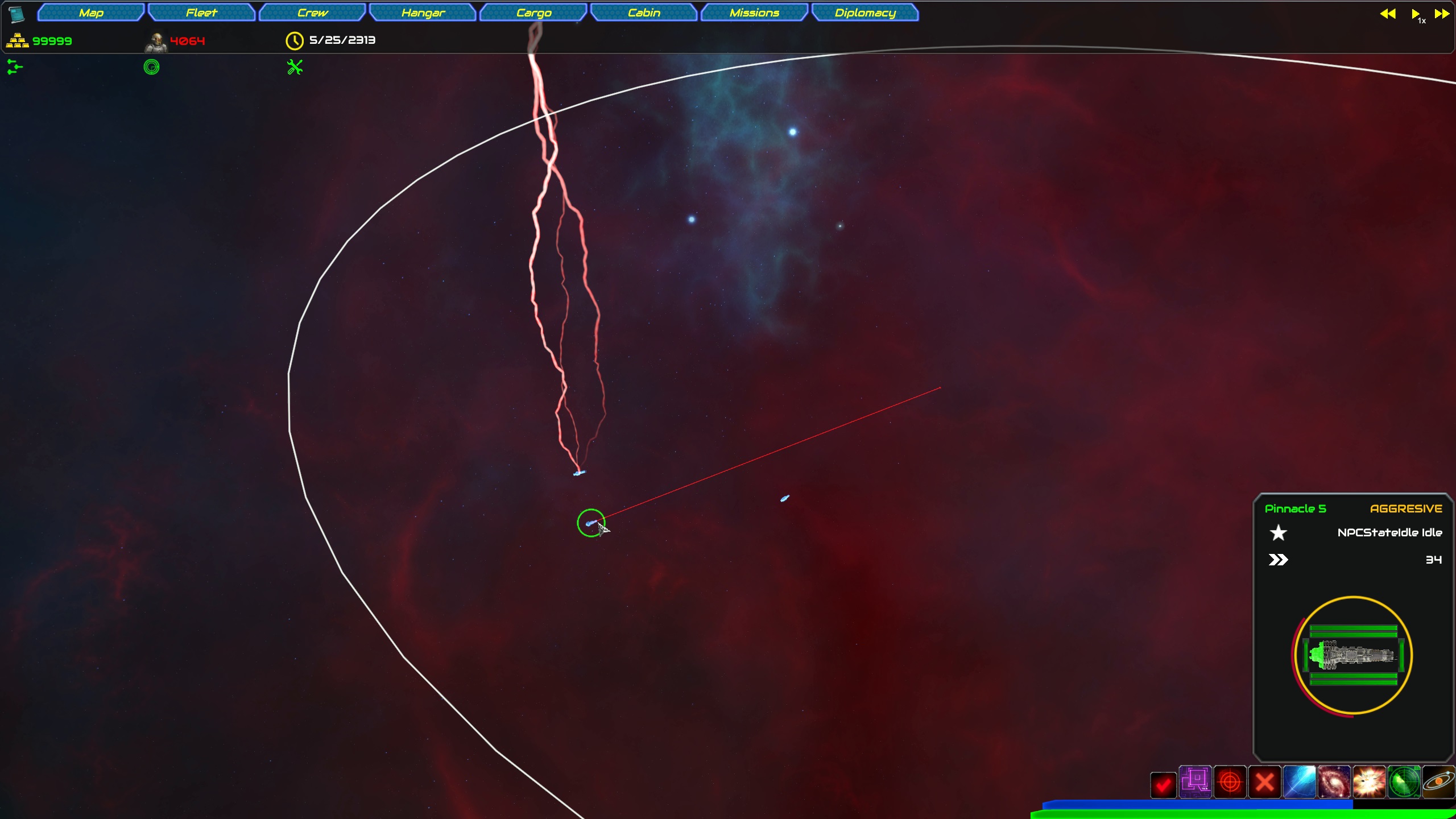 This is Nebula with energetic phenomena. Staying for too much time there can be fatal for your fleet but this place hides interesting surprises. 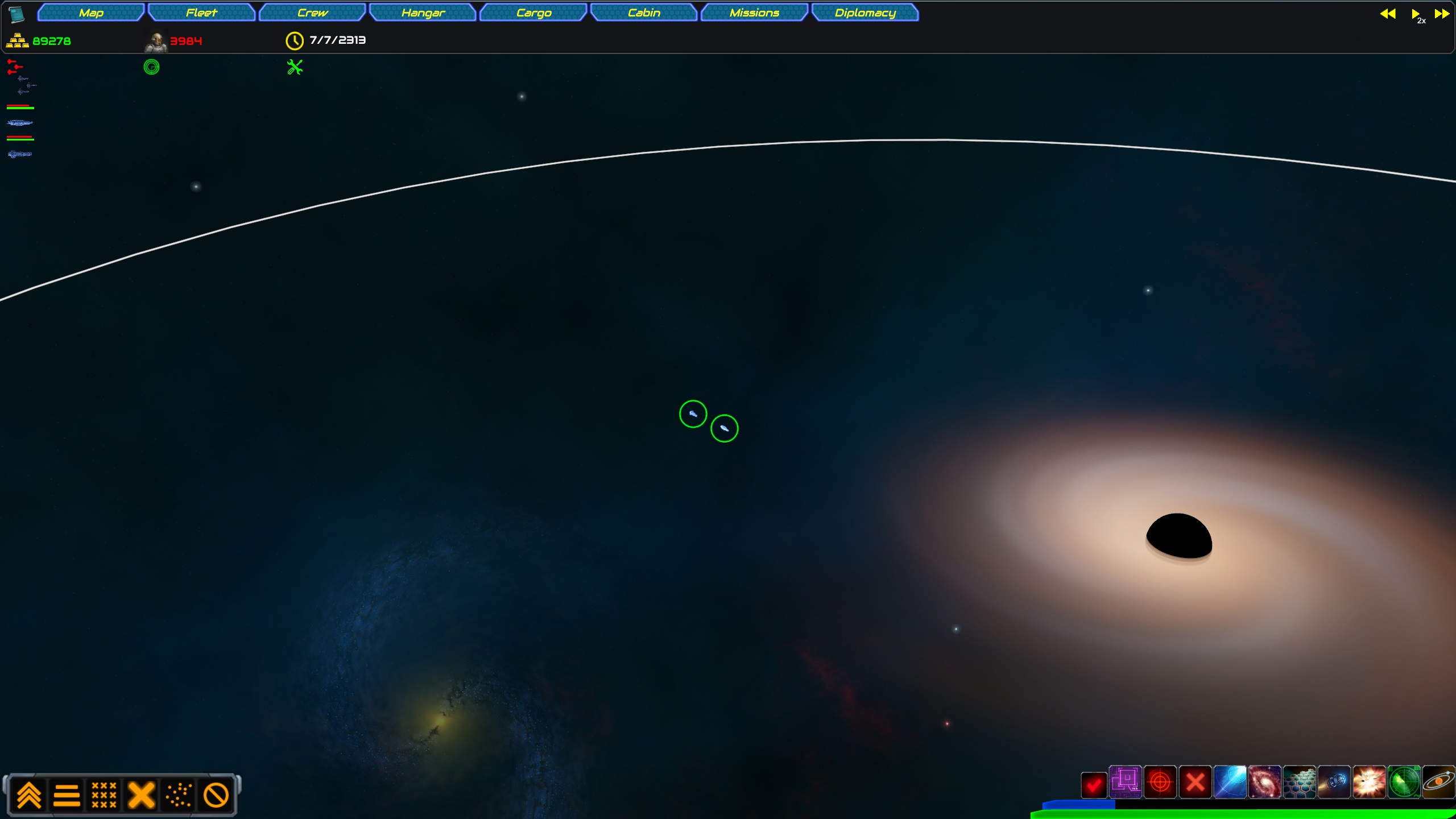 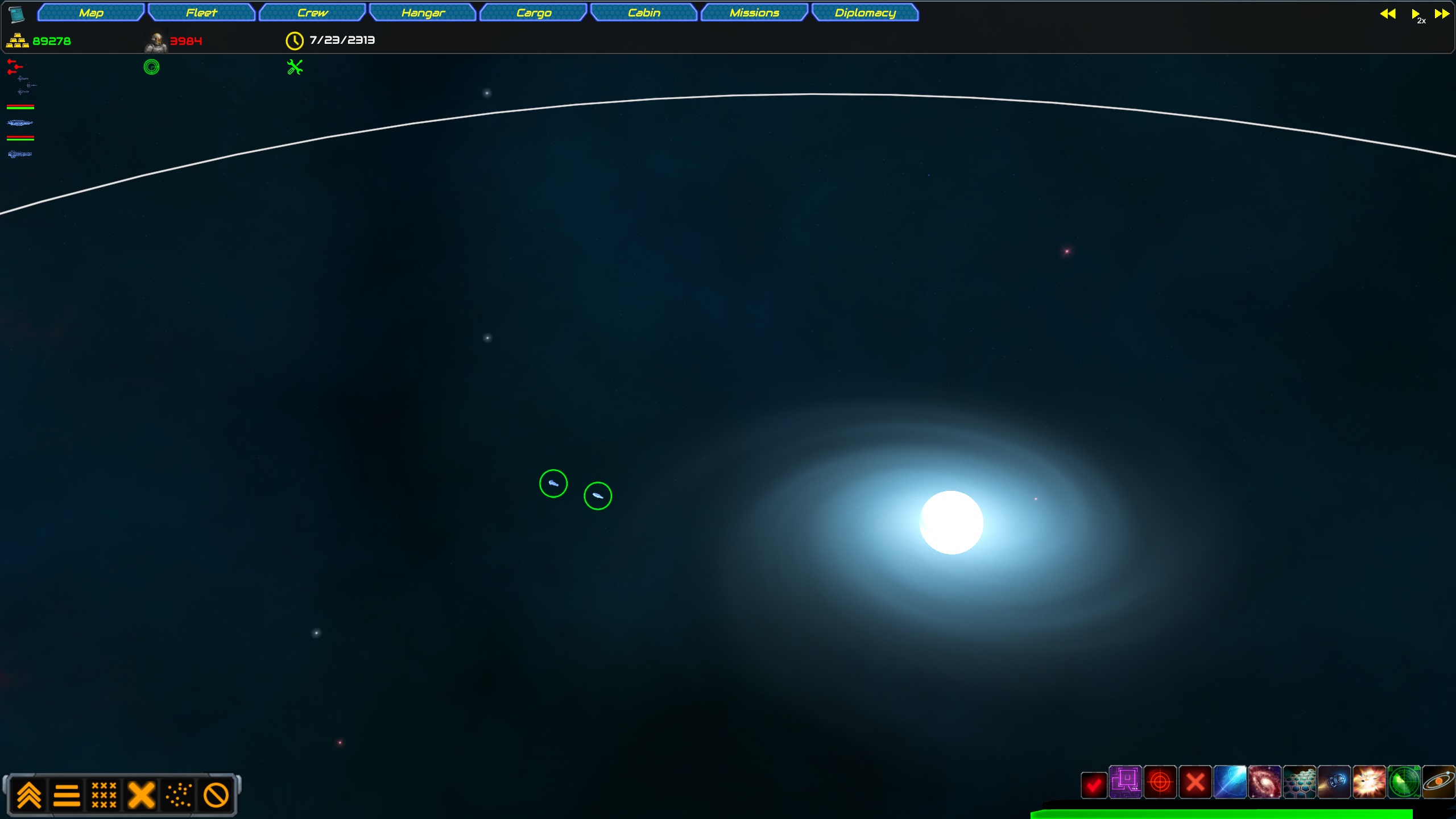 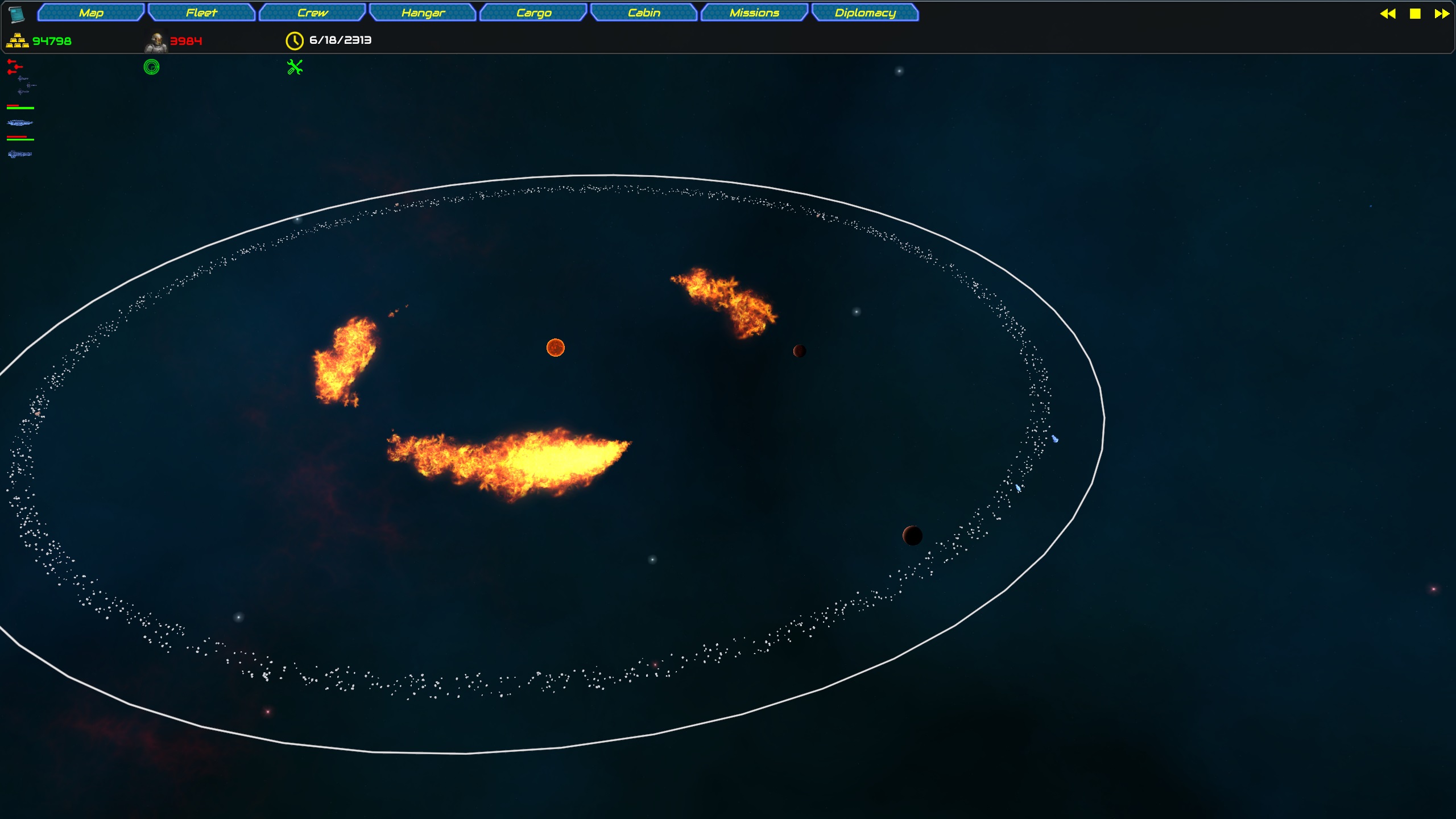 This type of solar system contains mainly dead planets due to energetic CMEs that happen quite often.
The resources found there are abundant since very few are willing to risk their lives to harvest them. 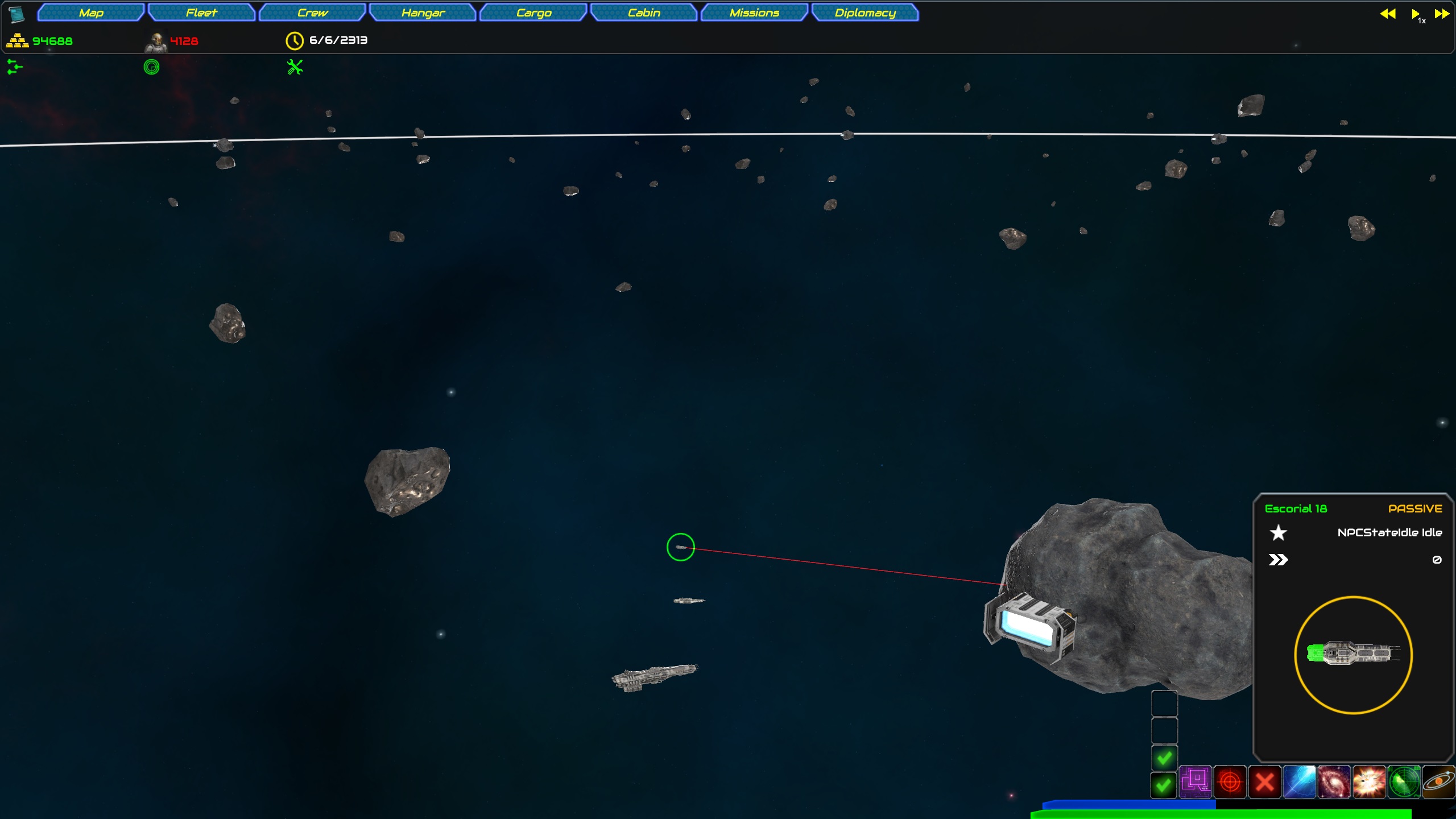 Possibly the remnant of a supernova, this type of solar system contains several asteroids (containing mostly gold) many of them waiting to be mined but also here you will find some of the most notorious pirates of the galaxy. If they are not hostile towards you, you can trade with them, retrofit your fleet and take missions.

In Stellar Insurgency, there are three levels of defense prior to hull damage.
The first level which is passive (i.e. it doesn’t contribute directly to protection of the hull) is stealth (not show in the video) and the other two levels which are active (i.e. they actively protect the hull) are the force field and the armor.

The force field protects the spaceship from energy weapons (beams, lasers) and similarly to the stealth field, it consumes energy but only when it recharges. When the shields are down, a minimum time that depends on this particular shield component stats is required before it starts recharging again. Similarly to the stealth field the force field can activated-deactivated from the fleet manager screen.

The armor component is not an energy component (i.e. it does not consume energy), however in contrast to shields it comprises of six parts:

This particular tactic is showed in the video when the AI controlled spaceship turns sideways because its front armor is compromised. But since the player spaceship is overpowered once the hull damage increases above a certain threshold the enemy spaceship tries to retreat without any benefits whatsoever.

And finally in the third in the third part we reveal some gameplay elements concerning the traveling between various solar systems or within those.

Two of the most important scenes of the game are the action scene where the action e.g. space combat, trade, dialogues with NPCs, etc. takes place and the map scene (yep you guessed it), that is the galaxy map where one can see details about the discovered solar systems and the lanes connecting them. One of the goals of the game is the exploration of the various types of solar systems that are interconnected with lanes via warp jumping.

During the early stages of the development those two scenes were unified into one. This means that the player could zoom using the free camera from the galactic view to a particular map object (e.g. a planet, star or a spaceship) and back. This was cool but it created the problem that the individual solar systems should be much smaller due to the limited precision (floating point errors) of the game engine. This is of course a very well known problem with various implications and solutions. My solution to this problem was not technical but rather one additional gameplay rule was added. That is that the player should always be focused on a specific solar system (the action solar system) and the player's fleet would always be within the confines of this specific solar system or traveling towards it (some spaceships may jump earlier to the target solar system than others) . This allowed me to separate the initial scene to an action scene and a map scene as is described above and give the action solar system a semi-realistic scale with large planets and tiny spaceships after all space is huge.

After doing that I immediately stumbled upon another problem. Now the action scene was large, the spaceships were small and the impulse speed should also be small (otherwise the space combat wouldn't be fun) and there goes the second scale problem which is not technical but rather gameplay related. Because no player would be willing to wait 10 minutes to travel from planet A to planet B. So the idea of local jump was born. 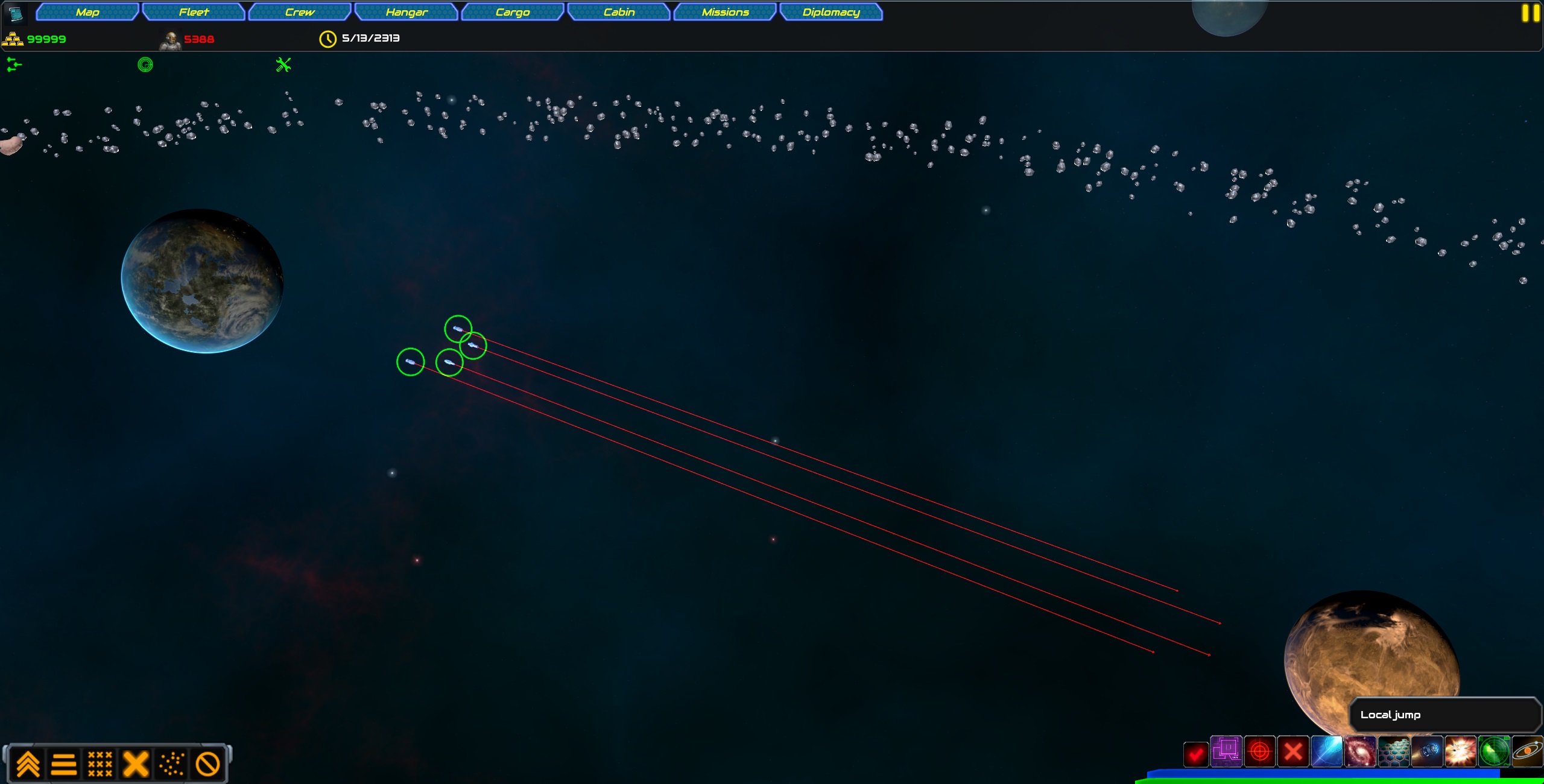 So you want me to wait 2 minutes in order my fleet to move from planet A to planet B? Ain't nobody got time for that. So the idea of the local jump was born.

To summarize, most of the ships (except from the very small vessels like fighters and bombers but those are usually within a hangar bay) are capable of warp jumping (global jump) between solar systems and but also between locations of the action solar system (local jump) and the impulse speed is used mainly for interactions between fleets e.g. space combat, dialogues with NPCs, orbiting a planet or a star and related things.

It is also possible to order some of the ships within a fleet to warp jump to another solar system at a different time than the rest of the fleet. For example When a fleet is warp jumping between two solar systems not simultaneously e.g. vessel A first and vessel B 30 seconds later, the vessel B will arrive at its destination 30 seconds later that the vessel A. but the player will have control of the vessel A from the time it arrives. During this transition starting from the moment that the last spaceship left the action solar system, the player would be automatically be transferred to the map scene where he/she is going to watch the fleet going from the previous to the next solar system (takes a couple of seconds).

Spaceships can be ordered to local or global warp jump simultaneously or not. When a fleet is warp jumping between two solar systems not simultaneously e.g. vessel A first and vessel B second after 30 seconds, the vessel B will arrive 30 seconds later at its destination that the vessel A but the player will have control of the vessel A from the time it arrives with whatever implications this might have.

Of course warp jump (local and global) uses energy which depends on the distance traversed. Energy is a direct resource on this game which is converted from antimatter which is another resource (more in a later post).

Thank you very much for reading.