Stealth Deathmatch is a quiet, yet explosive mod for Half-Life 2: Deathmatch. All players are made invisible, but have a tracking device and an upgraded weapon to track other players down. When firing a weapon, players become visible based on how powerful the weapon is. Let the paranoia begin.

Welcome to the first news post for Stealth Deathmatch!

Andrew "Winston" Watkins, the Lead Programmer for Modular Combat, has had the idea for Stealth Deathmatch in his head ever since I met him. We played earlier version together and had a blast - Stealth DM is really meant for a large group of friends to sit down and try to scare the shit out of each other.

The premise of the game is simple: Everyone is invisible, except for when you're firing a weapon. How visible you become is dependant on the strength of the weapon you're firing. Pistol being one of the weakest, RPG being the strongest. 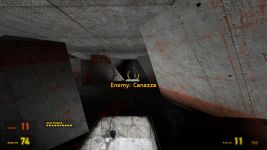 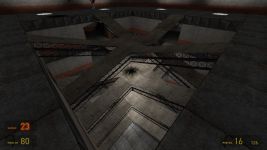 Each player is given a range detector, which will tell you how close the nearest player to you is. You are also able to upgrade one weapon, which will help you find other players.

Winston is working away at finishing this off, but as we enter into the beta-testing, keep an eye out for this mod! We'll be in touch soon!

This sounds exceedingly awesome, I must give it a try when it's out :O

I can't wait until this is released! Me and a friend had an amazing time tracking each other down in the older version.

Really curious at how weapons upgrading will affect gameplay.

Thanks guys. To be perfectly honest, so am I - none of them are quite working yet, lol. Hopefully won't be more than a couple of weeks!

Hey ho, I'm the guy who's being shot in the screenshots
We had a blast with the old version last year at a LAN party, and back then we only had a smaller version of dm_Catacombs you see in the first screenshots. I threw dm_slamArena together in a night, and interestingly, the wierd wall angles you see came from an invalid brush geometry that Hammer 'fixed' for me, that just so happened to be ideal for the map :)

This could be quite good :)

That black dude, keeps on looking at me.

I don't know if that guy is black, but what I do know is that this mod is gonna be awesome when it's released! :D

Sounds really interesting, I will try this when it comes out.

Sounds interesting, but I don't know how good it will play out. At least it sounds good on paper!

Its pretty damn fun. I'm hoping that the weapon upgrades will add some interesting new tactics, too.