So after long time with no actual update I think it about time to tell people what going on. 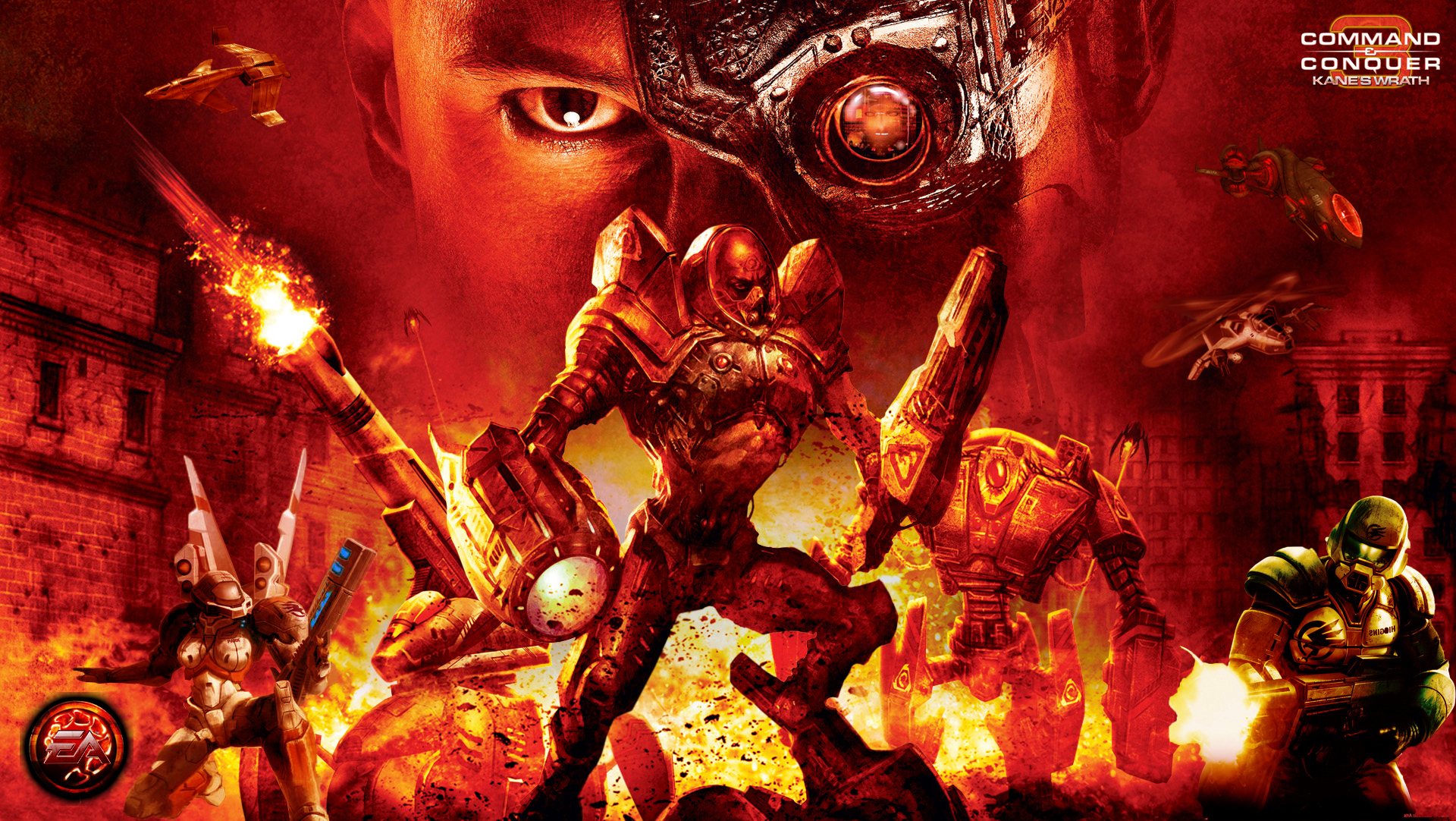 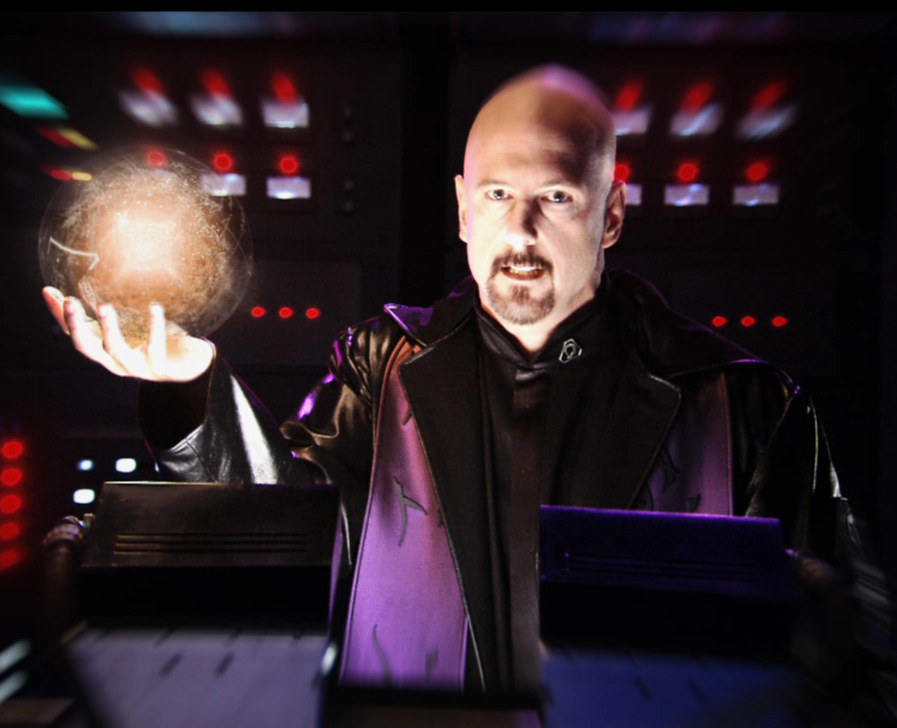 So after long time with no actual update I think it about time to tell people what going on.

I found myself sort of busy in the last year, after I took "small" vacation from modding, that vacation turned into doing things in RL which took a lot of time from me and made me less willing to modding at all, on my free time I preferred do other stuff like playing video games or other things I consider enjoyable, I eventually (and unintentionally) disappeared to a lot of people, all I can say is that I sorry about it and that I try be more active (If my brain will still function).

Despite what I just said I did mod a bit here and there and do so in baby steps but not really on consistent order, I still take things slowly but will increase the pace for the next version, aside from bug fixing and improvements I have big plans for the mod, The first one is related to just fix and add few more stuff.

The second (In few more releases After the current version I working on) is to try and bring back small naval fights to KW, but I will give more details in the future.

And the last one is making spin-off version to the mod that intend to be unbalance but have many units the community wanted in KW engine (without hurting the balanced version that it, as it separate).

Currently I need yours (the community) opinion in regard to adding two new units to the games, these units can be either useless or OP without the right tuning and i can't even promise I will success in bring them to working condition (I mean without any bugs or broken things till I test them out) but I can and will try.

Now, as for the units: 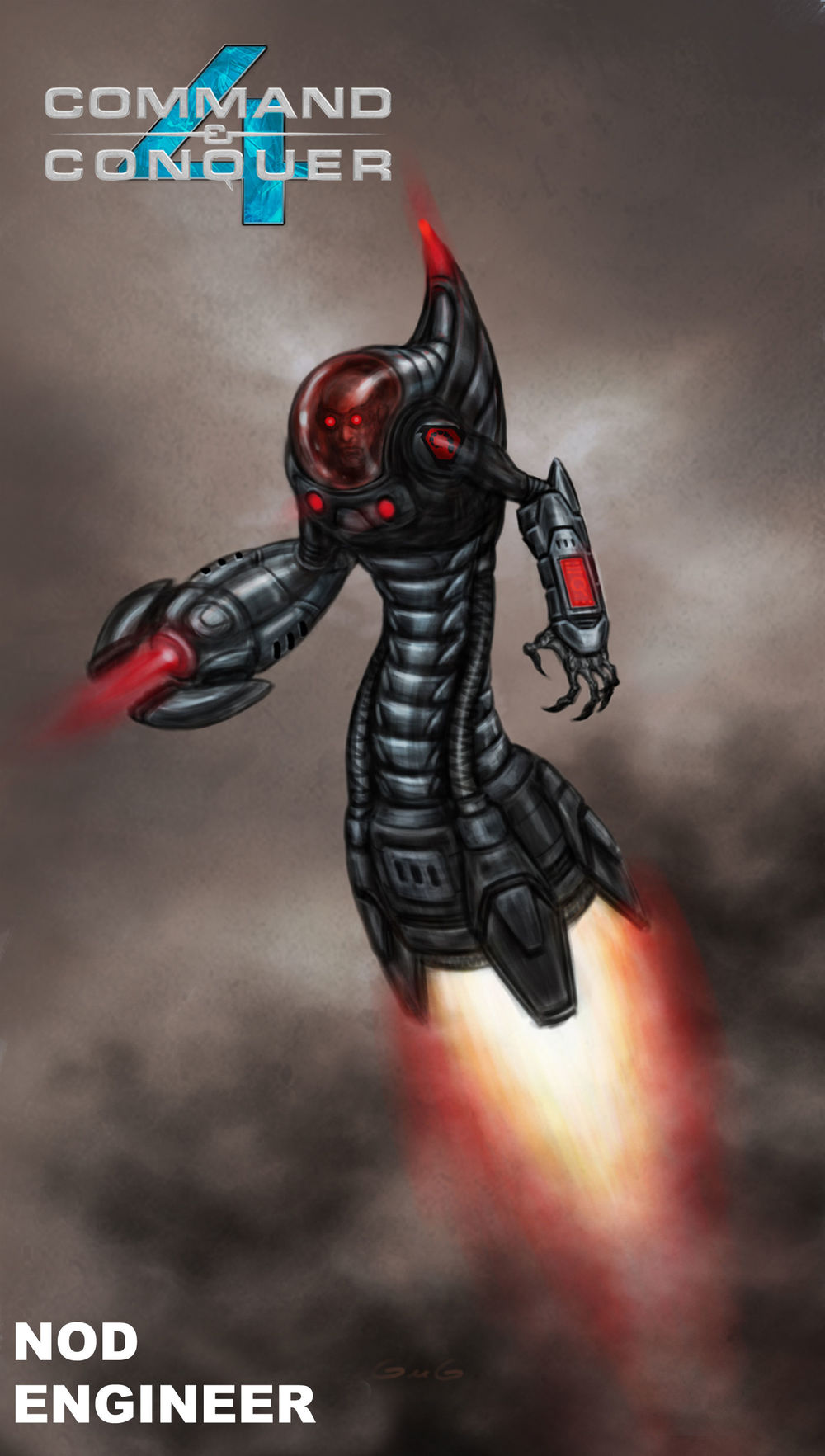 I always wanted to see this unit in action just in one mod, but I never found any public mod that had it, The C&C4 Beta Nod engineer aka the worm man, was replaced by the version we all know and love in the final C&C4 version. 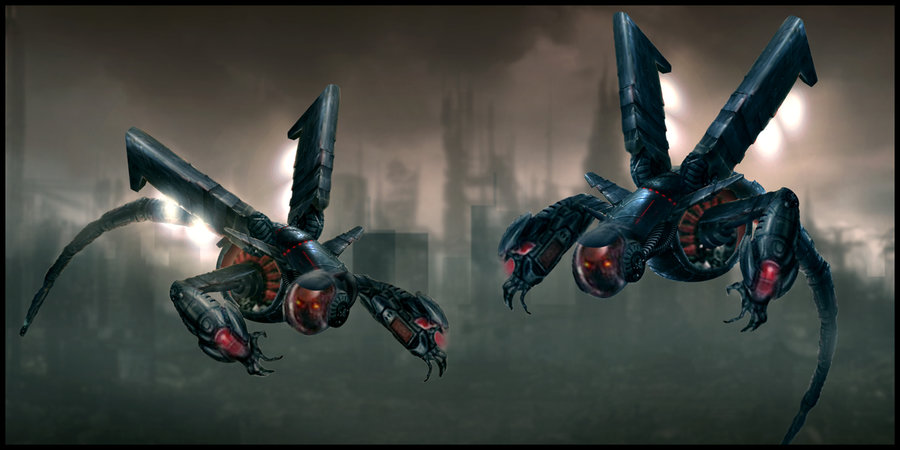 The Beta version however look more like the TW's Nod engi and fit to be one of MOK's cyborgs, however since I didn't found to it any actual use in the balance version (as the MOK's eng also the only engineer that use the cybernetic legs sub-object in the game, and I don't like to simply reskin stuff) aside reskining the current engi, I thought about leave it alone, as MOK in my mod have more than enough stuff to the point it be unfair to give them more (and because giving more armor to engi in the cost of being slower sound unfair to me), I was really close in put this model in "for spin off mod" folder but then I came out with some idea that can still give it a rule in the game, however I will need your help in deciding if to add it or not.

My idea is adding the Cyberntic engineer as Drone that come from the air tower (will required hand of nod though) and will repair aircrafts, Now the annoying part is that KW engine unlike C&C4 don't have any code I know of that can let you target friendly units without using the control key (one of the reasons the Scrin's corruptor don't have any cursor when you want to heal your units, and also hint why EA used repair drones with the MRT instead of giving it repair cannon or any of sort), this will make the unit to look broken, so here my ideas so far (help me out here by selecting the idea that look to you the most fitting or write me yours in commit below) :

1. Make it just as I said above (will look to some a bit broken though)

2. Give it a drone smiliar to the MRT

3. Give it repair gun that will do poor damage to enemies and heal allies only with control key (will look less broken that way)

4. Don't add it at all! MOK have too many things for balance game as they are.

5 Your idea? (Commit below) 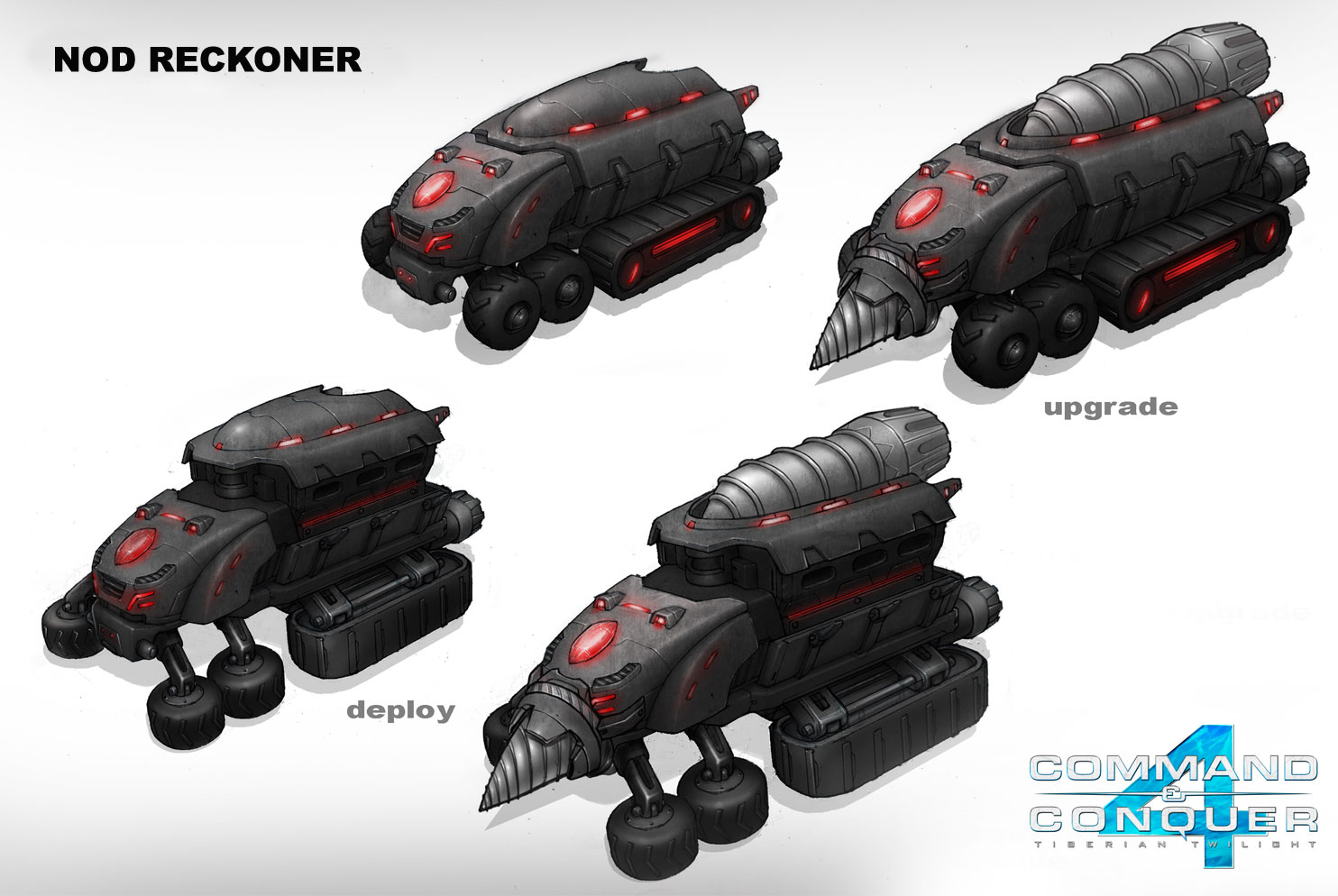 This is the unit i'm more afraid of, This C&C4 Reckoner which also look like the classic TS's subterranean APC after upgrade, can be OP in KW in one way or another, if it simplay will act as normal Reckoner with a drill that can "teleport" to the enemy base, sneaking engis and black hands to the mcv will be piece of cake. KW don't have any code that let you control digging units or "see" them underground, nor any way to block them or detect them, so making it "teleport" while showing to the player digging animation is the only way I aware of that can make it "dig" (As jumpjet... will make it ..jump... got it? jumpjets? jump? ahaa ahahahaa... nvm)

That Reckoner may look cool but can be too unbalance without proper limitations, So I have few ideas in mind and wanted to ask you what you think will be the best:

1. Make it replace the Black hand's Reckoner (As MOK already have their own modded Reck in this mod) and that it, leave everything the same but let it diiiggggg (OP alert D: ) (Will also need to change the Dozer upgrade description as it mentioned that the Reckoner can have dozer... Which won't happend with this model as the dozer won't fit anywhere with that drill)

2. Make it replace the BH's Reckoner but make the drill as tir2/3 upgrade, make it expensive (Still won't solve the engi spawn)

3. Give it really short digging range! and make the ability to cost money! (The engi still be a threat..)

4. Make it as separate Tir3 Reckoner that will be expensive, will have 1 slot, ability will cost money/may also be upgrade, and short digging range (don't see why anyone will want to use it then... and two reckoners sound a bit funny, plus Engi threat still present)

5. Add it as separate Tir3 unit that can attack with flames and particle beams from the windows only when unpack and don't have the ability to garrison infantries at all, give it short to medium digging range ability with proper cooldown that will cost money. (That sound like the most balanced way to go honestly)

6. Just don't add it, look like too much of a work

Also I really like both ideas btw =) especially the engineer drone.

1. the engineer, since this is a Beta version, I would choose option1 and suggest try the original idea you have put here. It would look bit broken but who knows the implementation. We see more tolerance in Beta release :b.

Maybe, you can try use the way that Beam Cannon uses for Obelisk that you add a spell that cast the repair ability which might be less broken for this only flying infantry (since it is supposed to be an infantry, it cannot repair itself unless there is a hospital)...

Also, why not try 'attaching' ability just like Alien's buzzer that this unit can attach to repair which I suppose another way of making it less broken aside from your current options. Repairing is extremely precious in KW that only the elite can exclusively have it.~~~~

2. the Reckoner, option1 is also my prefer as it is the origin which this model serves. I would not suggest trying to balance the game for the sake of balance itself. The unit is designed, no need to hassle that. There are other means of avoiding its OP such as considering the construction radius. Because I suppose the battlefield is designed to be some places where the major construction happening underground, so there are sophisticated fabrics beneath the earth that both NOD and GDI cannot infiltrate between each other, but the underground world is opening to your own people. So, if the Reckoner tries to sneak through, it can only reach the edge of enemies' basement. It is much better to have the major battles overground due to the harsh circumstances in TW world (also for players, overground is more tangible). Adding teleport range is another good idea as you would say the drill get too hot to constantly dig such harsh environment and there is always cooldown moment.

I wish this feedback can do a little help anyway.

Dig ability range 50% shorter of entire screen to be used as a small escape from losing battles and not able to sneak to bases from very far away.

Units inside can fire as vehicle moves

Vehicle can repack from deploying

Dig ability cost $0 with around 1 Min cooldown to use due its a teir 3 upgrade with short range digging for mainly use as a head-start escape than always try to use to teleport to enemy base from far away unless its close enough.