Hungry for more factions previews? ;) I'm presenting to you State of the Teutonic Order! 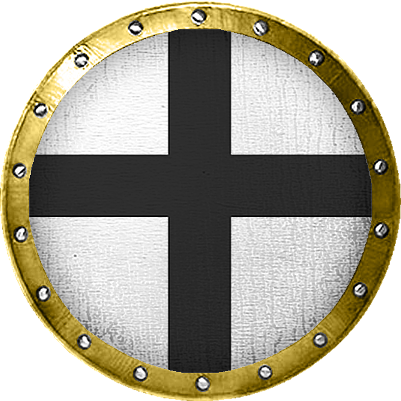 State of the Teutonic Order

Before being one of the major and influential states in the Baltic, the Order of the House of Saint Mary of the Germans in Jerusalem, or the Teutonic Order, was a small order based on the Knights Hospitaller and Knights Templar.

In 1128, a wealthy German began receiving other Germans, pilgrims and crusaders, in his own house, for comfort, for they did not speak the Latin or French of the religious orders nor the Hebraic or Arabic of the locals.

With too much work, he built his own hospital. Giving and receiving alms, nursing sick and wounded crusaders and pilgrims, he was eventually joined by other fellow countrymen, and soon, they "banded themselves together, after the pattern of the Order of St. John of Jerusalem [Knights Hospitaller], and united the care of the sick and poor with the profession of arms in their defense, under the title of Hospitallers of the Blessed Virgin".

The city of Jerusalem fall to Saladin in 1187, and the conqueror allowed the order to continue its service in the capital. During the crusader siege of Acre in 1189-1191, one Sibrand, considered the first Grand Master of the order, along with citizens of Lübeck and Bremen founded a field hospital and shelter for the German soldiers, either of Frederick, the Holy Roman Emperor, Leopold of Austria or the bohemian troops of Diebold.

This small field hospital was joined by the brethren of the Blessed Virgin in Jerusalem. This joint venture was recognized by Pope Celestine II in 1192, and became the Teutonic Knights as they were known for the following decades and centuries.

Until the capture of Acre, they served as people who tended to german sick and wounded, but after the city was taken, the order was recognized by the pope. Henry de Walpot, the first Grand Master, purchased a site within the city, built a hospital and enlisted soldiers to aid his new founded knights. The Holy Roman Emperor Frederick used his influence to further the progress of the Order.

It expanded from there, gaining estates and monasteries, in Italy, Hungary and the Holy Land. Andrew II of Hungary took into his service the Teutonic Knights in 1211, years after Henry de Walpot died, to defend his south-eastern border from the Cumans, and received the district of Burzenland.
In 1224, they petitioned the pope to be under the direct authority of the Papal States rather than that of the King of Hungary. Fearful and angered, Andrew II expelled them from his lands a year later.

Livonian Brothers of the Sword

Christianity arrived in the Baltic with the Norsemen in some smaller settlements, and the pagans had contact with other Christians; german traders that used the old trade route of the Varangians and Greeks. The bishopric of Üxküll was already established by Meinhard, who, despite not being able to entirely Christianize the Latvians, ensured a Christian foothold in Pagan lands. Further attempts to convert the pagans led to the death of one of the bishops of Üxküll, Berthold. The pope called a crusade that arrived in the form of 23 ships and 500 soldiers in Riga, commanded by Bishop Albert of Livonia, who also became the Bishop of Riga and the founder of the Livonian Brothers of the Sword, founded to secure the conversion of pagans and protect the local commerce.

It was founded by the First Bishop of Prussia, Christian of Olivia to protect Cistercian missionaries in Prussia. Duke Conrad of Masovia granted them with the town of Cedlitz and later Dobrzýn, hence their name, and the surrounding lands to finance their operations of countering pagan invasions in Poland. Initially they had 15 knights and other soldiers, men-at-arms, squires, sergeants and etc. The order counts with the Masovians and the Teutonic Order for its survival, for their number have been dwindling over the years.

Grand Master Hermann von Salza met with Bishop Christian in Rome, and there, both saw opportunities. With the permission of Duke Conrad and other nobles from Masovia, the Teutonic Knights were to aid them against the pagan Prussians.

The Holy Roman Emperor granted the Order the land of Culmerland, as a sort of base for their future conquests, conquests which the order was allowed to keep, as of the Treaty of Kruszwica, in 1230.
Grand Master Hermann’s main forces were at the Middle East and Armenia, but he managed to spare about 30 knights and near 300 sergeants, squires and regulars. The order took control of Vogelsang, and sent small raiding parties against the pagans across Vistula River.

Small campaigns happened, with polish, german and Pomeranian crusaders, who’d return home after the campaign ended, and thus resting upon the shoulders of the Order to consolidate their rule of the region, mostly building rough timber keeps.

By 1232, Rogów had fallen to the crusaders, as well as Gurske and most of Culmerland; to consolidate, fortresses were built in the ruins of Tórun and Chelmno, and immigrants from Germany and Poland settled minor towns in the conquered regions.

Seeing the success, the pope promised to call another crusade and press onto the heathens. Success is on their grasp, but the Lithuanians gather under the banner of a young Mindaugas, who had many other successes on the field and is on the verge to unify Lithuania. That and the strong Novgorodians to the east of Riga. Though they just left their own civil war, no one can predict the ambitions of the Rus'.
The Holy Roman Empire will be a lasting ally, though the same cannot be said about the Poles. If the heathens are conquered, converted or exterminated, who would stop the Poles to turn against the Order, a possible mighty rival?

Only God and their swords are to keep them safe, in a land surrounded by enemies and uncertain allies. 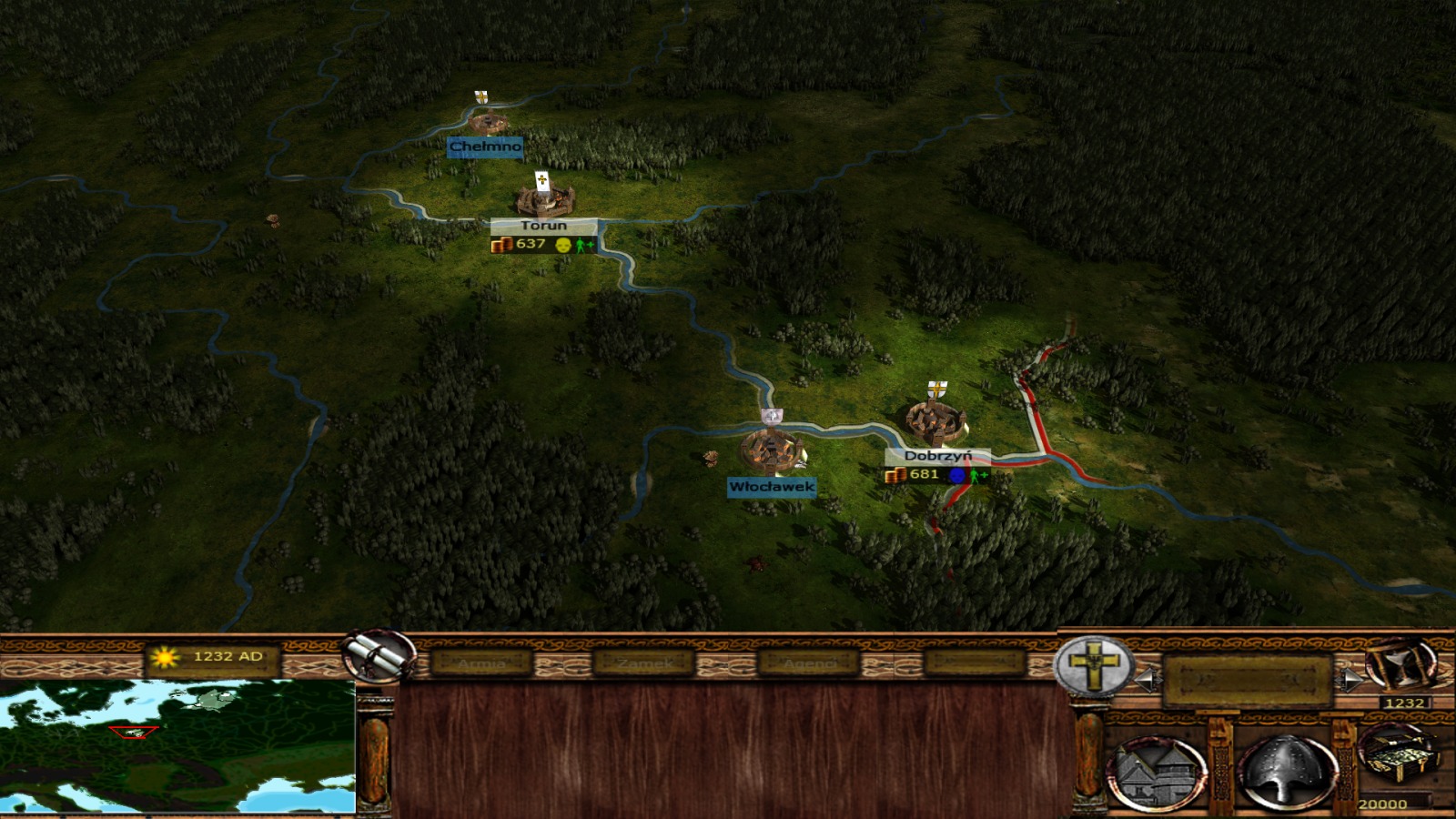 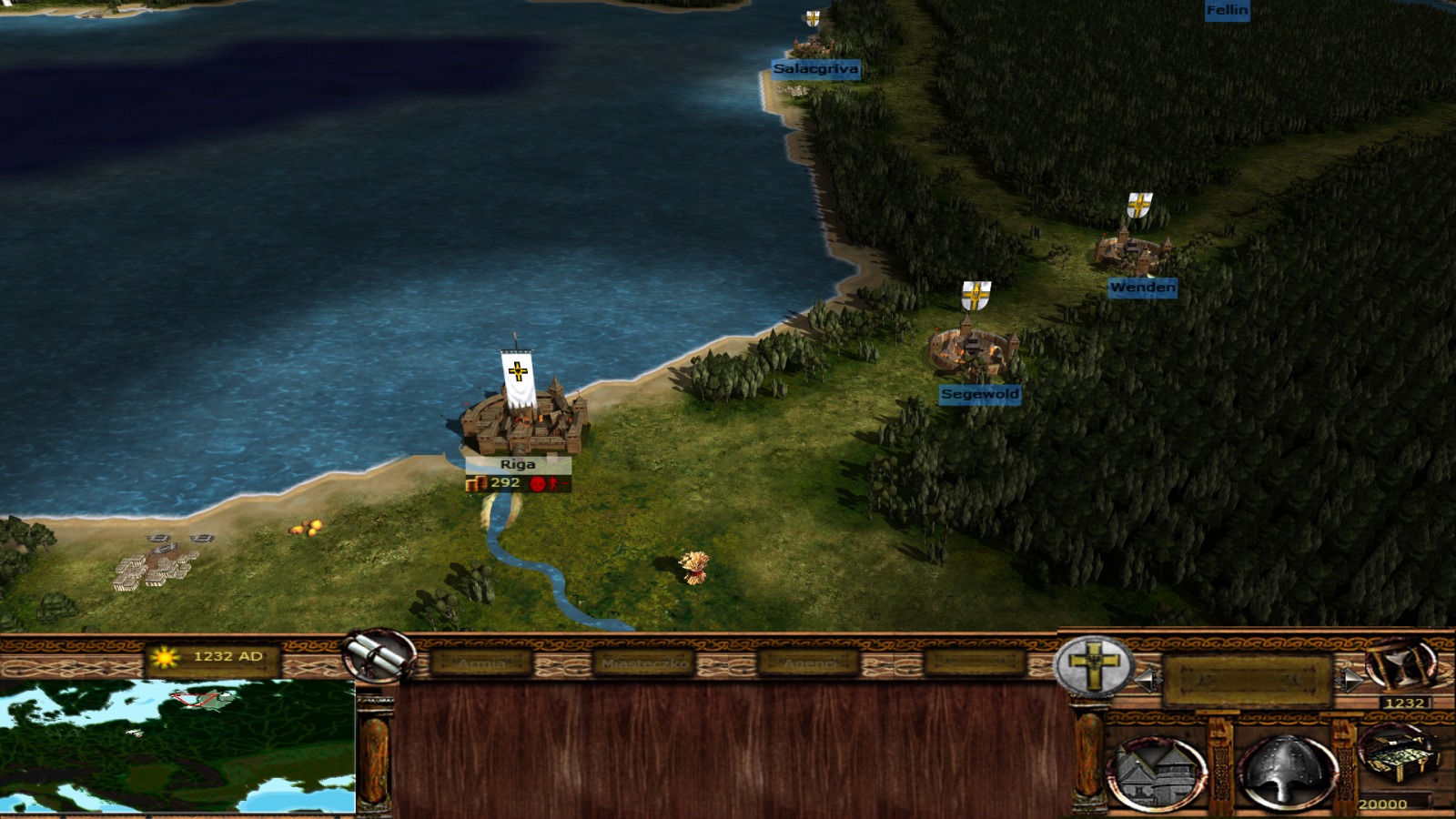 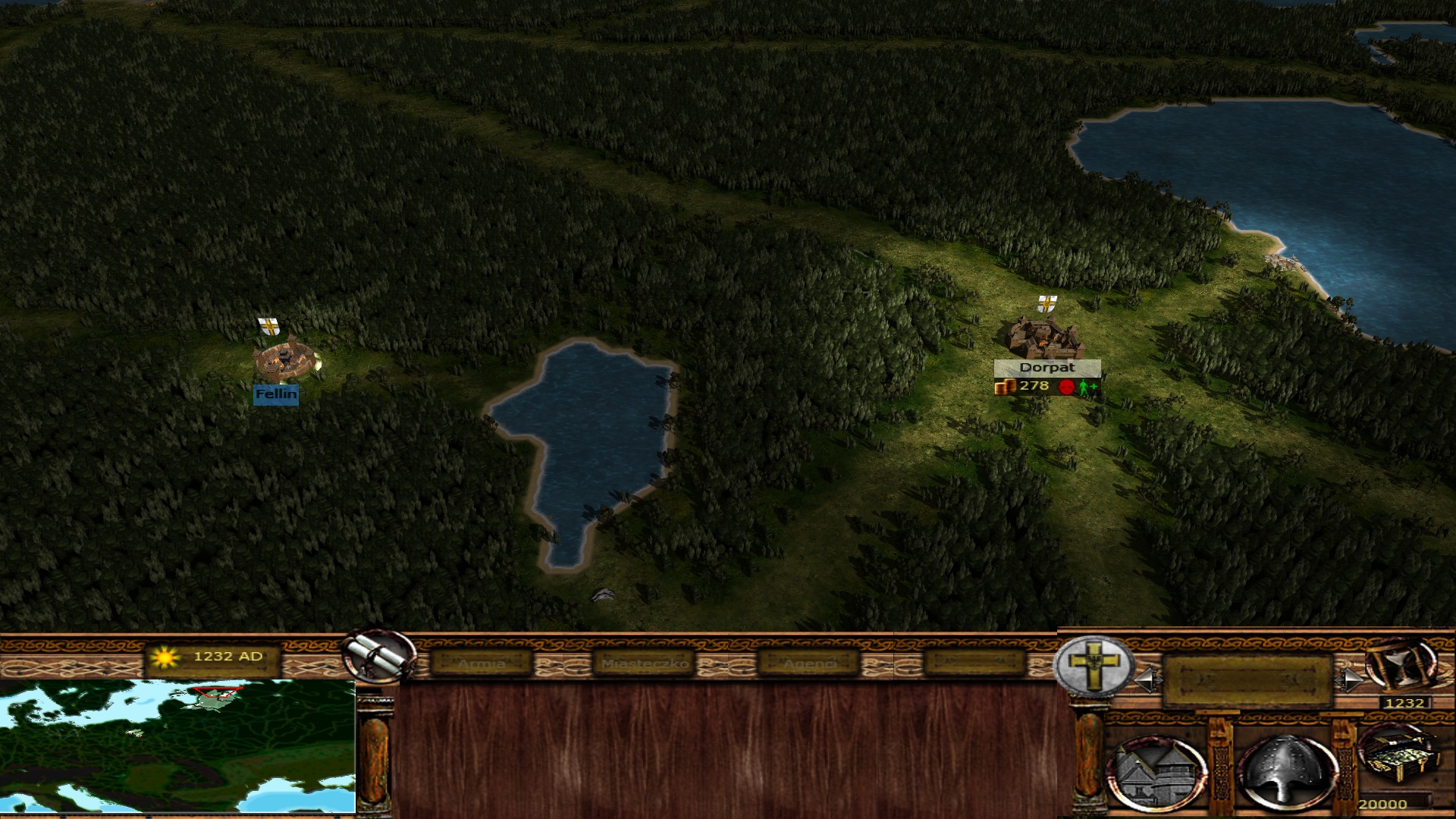 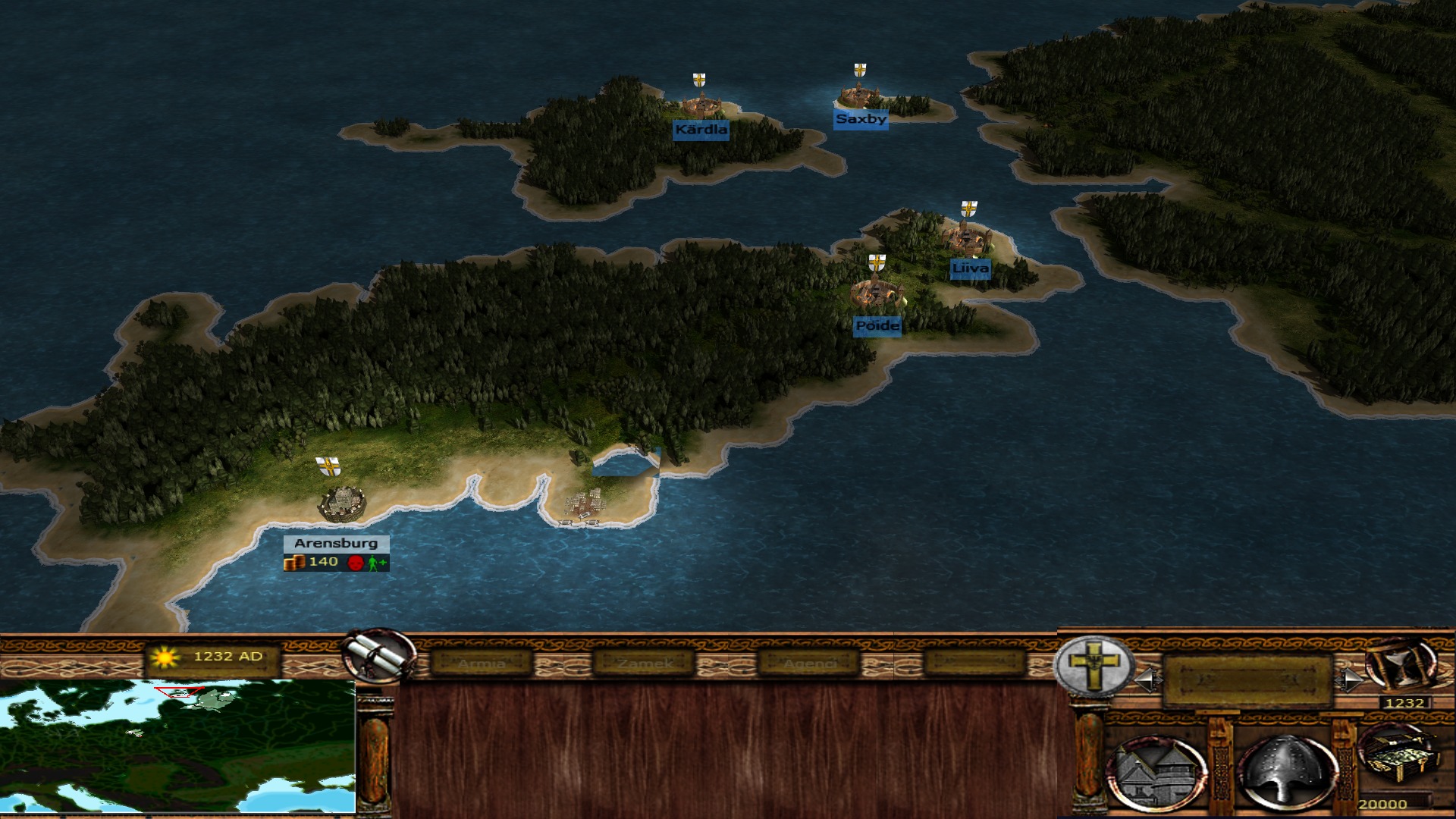 The Teutonic Order, like the Templars, was rich and had several benefactors to boost its economy from the beginning. The Order possessed many estates in Europe and Asia, as well as strong benefactors, like the Holy Roman Empire and the Free City of Lübeck.

During and after the Prussian Crusades, the Teutonic Order settled in Chelmno Land and expelled the Prussians from there, quickly taking control and looking to make up for the expenses in campaign. By clearing the marshlands and woodlands for crops and settling of towns, mainly of German folk, this increased German influence on the Baltic commerce.

Not only that, but the Order protected Lübecker merchants especially, and in return, they would be able to use Hanseatic ships to aid the war effort in Prussia.

The Teutonic Order was based off the Hospitaller Knights, at first. But as they gained power and expanded they also became a Military Order, like the Templars. To preside in both chapter and battlefield, the Hochmeister, or Grand Master, existed, and he was elected from and only by the knights.

The Order was divided in two classes, clergy and knights. The knights took vows to mainly fight the enemies of the faith, while the clergy tended the hospitals, churches and whatnot. In both these classes, there were serving brothers, called Familiares; though not very high in hierarchy, they could be selected to become squires and priests.

On the other side of the hierarchy, there was the Marschall, and he served as a lieutenant general in the battlefield under the Grand Master and presided over the military affairs in his absence; the Spitler, responsible for all of the hospital affairs; the trapier, who provided the outfits and armaments, of simple yet effective usage, and the treaßler, the treasurer.

The expansion of the Teutonic Order was large, and to manage the newly conquered lands, provincial masters were appointed, the Landmeister, and he acted with the voice of the Grand Master in the country.

Overall, their discipline and organization should and will be helpful in the upcoming battles against the unruly Prussians.

The Order possessed large numbers of knights compared to their Livonian and Dobrzyn brethren, though; sadly, most of these knights were not in the Baltic; nonetheless, the Order possessed more infantry than the Livonian and Dobrzyn brethren. The elite cavalry and, sometimes, senior officers, were the Ritterbrüder, Knight Brothers, who held the best available equipment befitting for someone of their rank and status, for all of the Ritterbrüder were of noble descent.

The Diendebrüder, the Serving Brothers, were not necessarily of noble birth, but they had military experience nonetheless. Men-at-arms, horsemen and partially armored infantry; Disciplined and more numerous than the knights, they were the backbone of the Order’s hosts.

The Halbbrüder, the Half Brothers, were noble knights who, unlike the Ritterbrüder, did not swear vows for life. Despite that, they were fierce fighters and have arms and armor as good as any noble knight.
Their forces were spent after years of campaigning against the Prussians, and so, before more reinforcements came, the Order came to rely on the Order of Dobrzyn and the Livonian Brothers, who also were spent, so, the bulk of their forces came from native Prussian recruits; who, although, not very useful in organized battles, could serve better for raiding and scouting, due to their knowledge of the marshlands and woodlands of the country.

The german colonies in the Baltic provided a number of militia. They participated in campaigns, but their main use was for garrisoning towns and sparing the Order’s soldiers the need to defend them.
The crusaders also provided large numbers, but their temporary presence forced the order to look other ways to ensure the peace in this impetuous country. 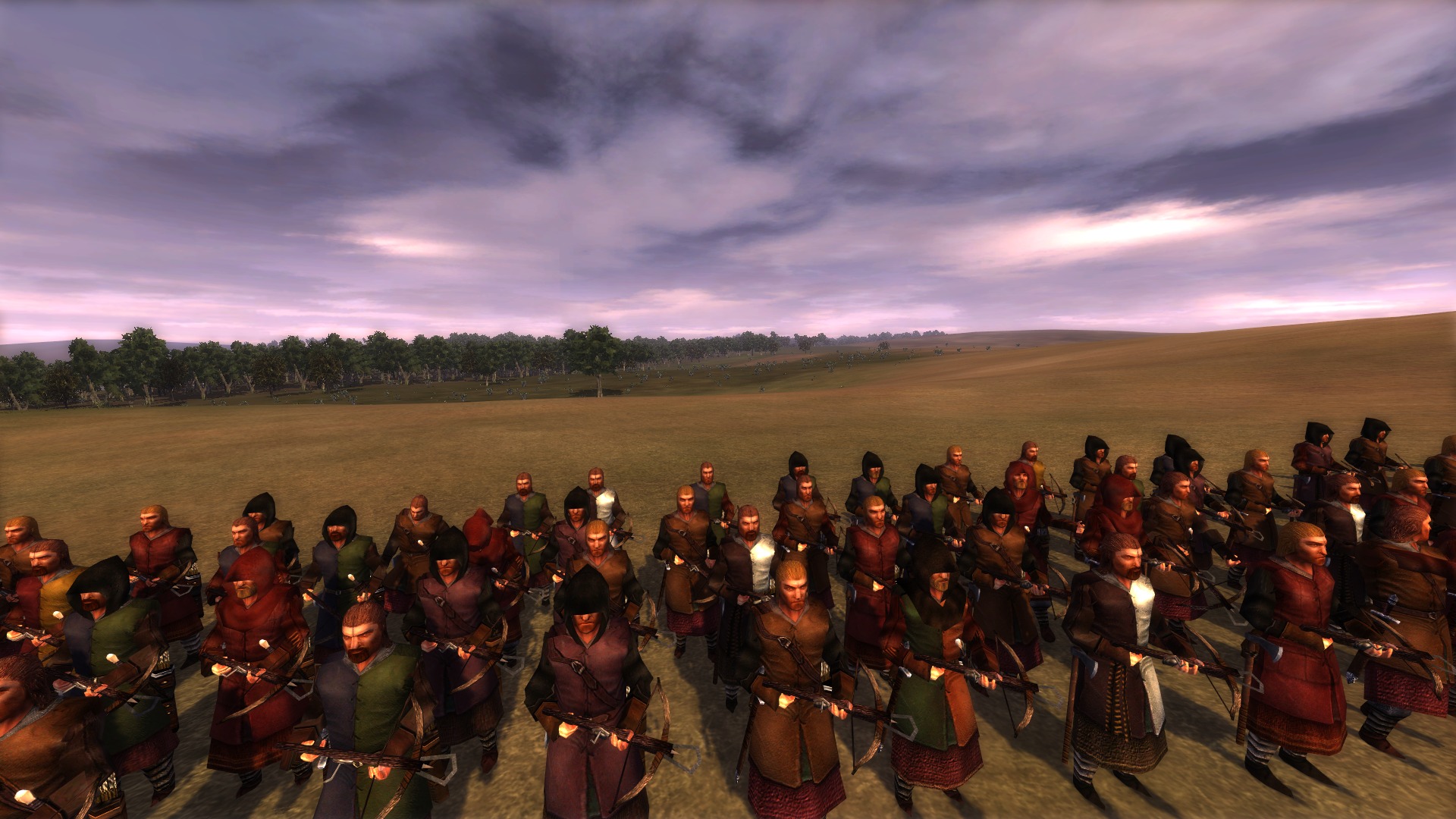 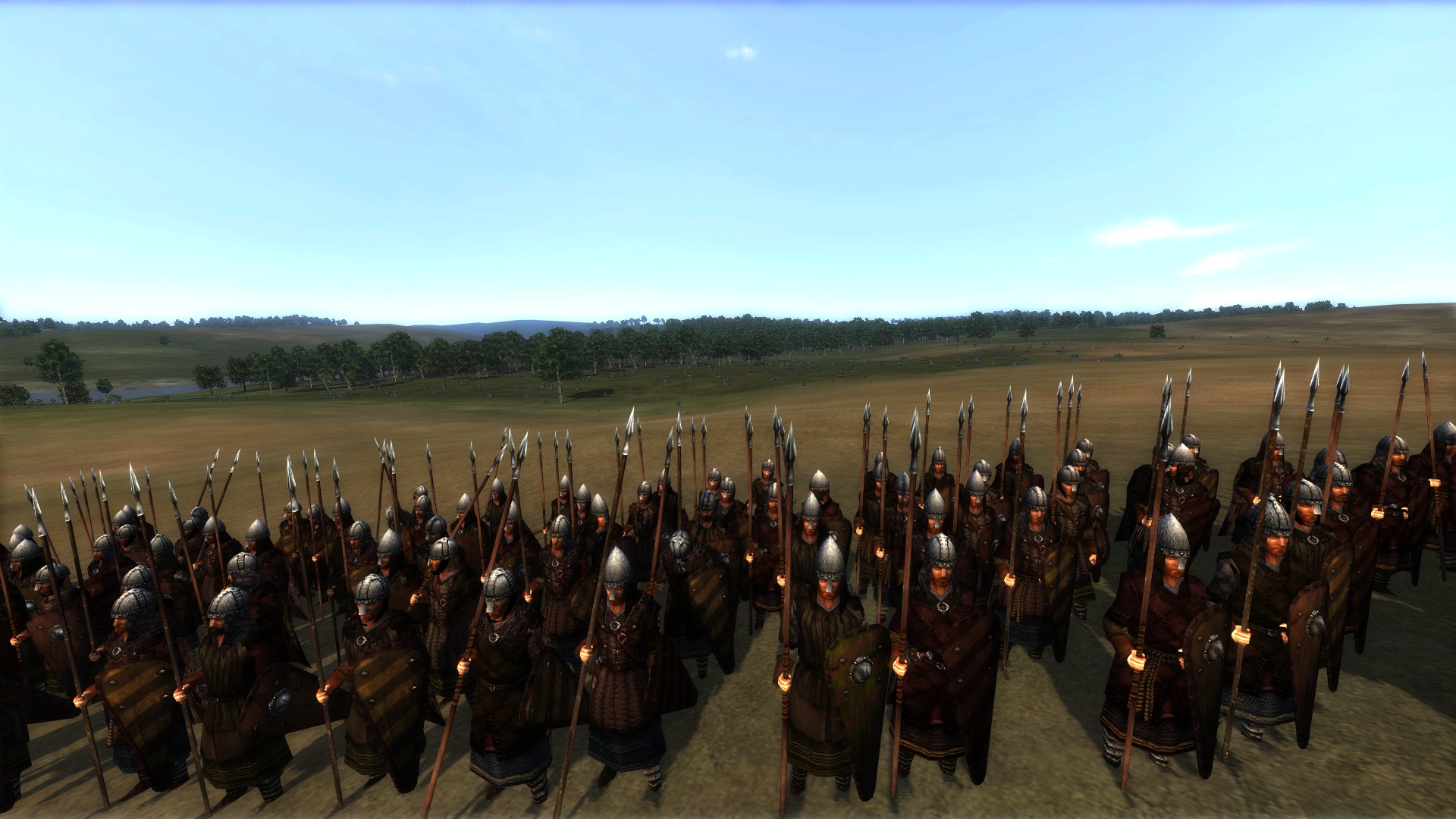 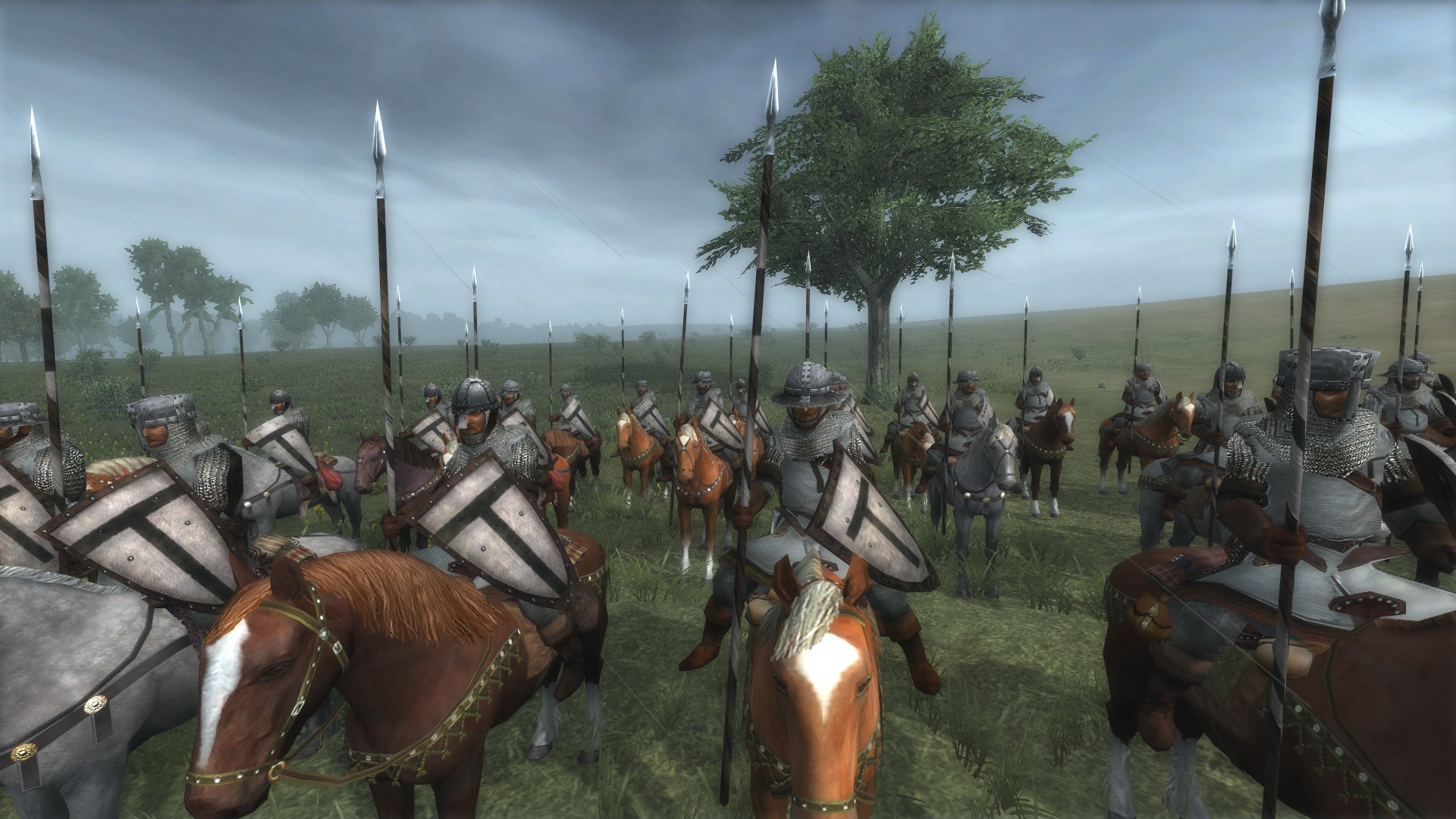 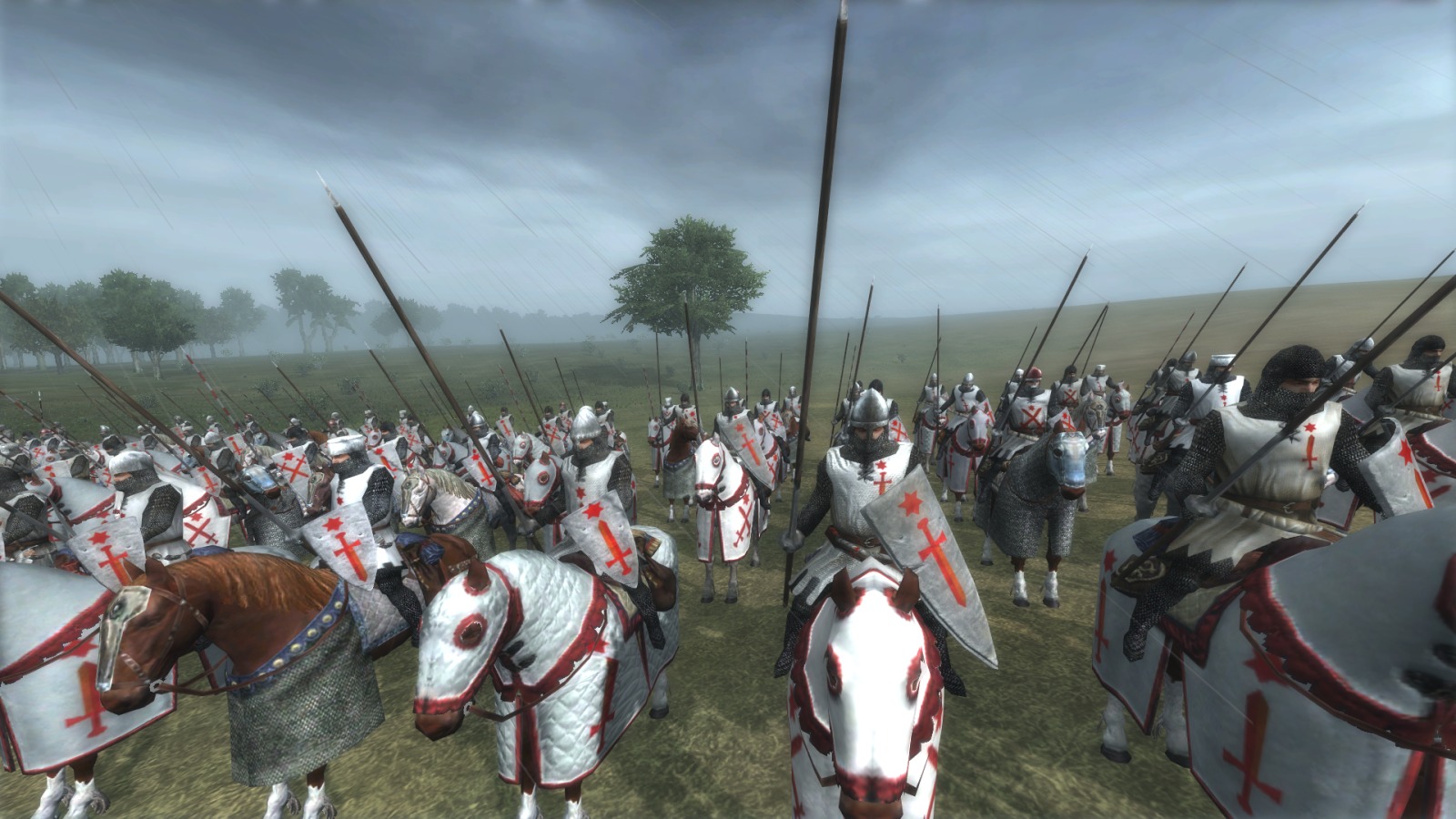 Units, materials and resources from: