In this update, the team discusses the status, scope, and approach to the game including some changes moving forward with Imagine Nations. 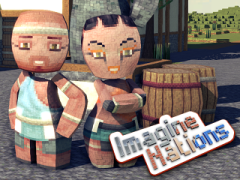 As Summer comes to a close (and we get some folks back from a few weeks of vacation), we wanted to get an update out to everyone about the current status of Imagine Nations. There’s been a bit of activity over the last few weeks and we’ve made two big decisions recently that have expanded the scope of what we need as a base build. As such, this post will explain the reasoning behind the decisions and what that means for a first release. First, we have shifted over to the Unity game engine (Unity3d.com). We’ve been wrestling with a lot of the fine points of our own engine, and while we’re confident we can get them done, it comes down to time. Building a stable engine can take years, and Unity allows us to have that stable foundation to focus exclusively on our game itself. Our engine is very similar to Unity in many areas, so the transition was relatively painless. Moving forward, this has cut down many of the tasks related to the engine, and allowed everyone to shift to the remaining game features necessary for launch.

Second, we have been discussing the features we were aiming for in the first release and found that it did not accomplish the core vision of Imagine Nations. Our vision with Imagine Nations is to provide fully autonomous cultures that are simulating at all times and a fusion of features from all genres to allow the player to interact (or not) with those cultures. While the former was mostly covered, the latter was lacking. Most of the functionality was aimed around RPG and Creative, while all other genres were non-existent. Now we’re not expecting to build the entire game all at once, but we would at least need a foundation that allows any person coming into Imagine Nations to find features they enjoy from other games (and allow someone to experiment with features they may have never tried before). They’re going to be very basic and rough at the start, but we will continue to refine them as we expand the game over the years.

What does this all mean? It means that we will take our time in ensuring that the core vision of Imagine Nations is met with the first release. While this shouldn’t greatly increase the time necessary for the build, it does mean that we will need more time in development before we’re comfortable with a launch. Unity has reduced the foundation portion of development to nearly zero, so we are all fully working on the game logic at this point. It should move pretty smoothly (within reason, as speed bumps can occur at any time within game development) and as soon as we are confident we have built something that we love to play, we will release it for everyone else to try out.

To clarify what we expect from the first release, this is the revised (and pretty verbose) feature list:

As a reminder, the first build (pre-Unity transition) is available for all backers. We will be expecting an update using the new Unity changes hopefully in the next few weeks (vacations slowed things down a bit). The Unity update shouldn’t have too much changed content, but will be much more stable. We will then continue to add the above content as its finished and backers can continue following our development via the developer feed.

Get Imagine Nations for $15.00 and gain access to early builds and Backer’s Access to private forums for Backer’s Only.

Not going to purchase early access until some good builds are shown, sorry.