It's been a long time since the last article. While lots of pictures have been posted, I think some clarification and the game's state is needed. Today we'll be looking at the game's current state and its future as we head into 2015.

What's up, everyone? It's been a long time since I've written an article, and I'm excited to finally have the ability to share walls of text with you guys. A LOT has happened since the last article, so I thought I'd fill everyone in with the latest happenings and such. So, before I go into any extreme detail, I'll show off and explain in further detail some of the images that have been posted since last time.

Here we have a new overlay effect being shown off. Overlays are generally map specific, and exist on the second highest surface, only below the UI. The Overlay surface is accessible for modders, so I hope some people will find cool ways to utilize the Overlay system. It can be used alongside the UI surface to create some really cool interfaces. Here it is being used as an aesthetic decoration for the map Nightfall. 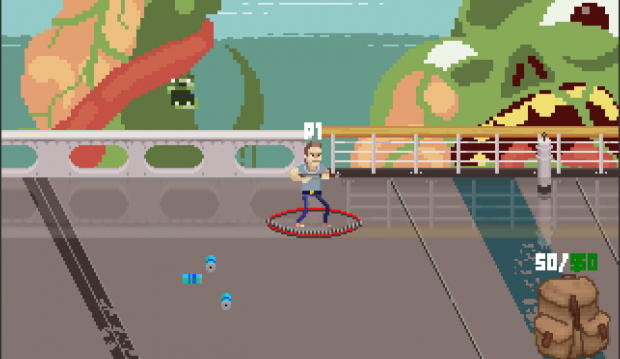 Here we have the first implementation of the Kraken Mega Boss on the Sunken Map's top floor. As you can see, this guy is extremely large. He attacks by shifitng through the waters and slamming his tentacle down, which has an Area of Effect similar to the Tank's attack. His tentacles can be as close to or as far away from him as possible. As far as how to defeat him, I'm keeping it a secret for now. 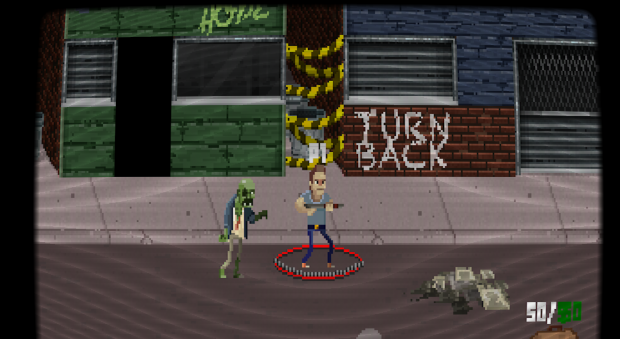 Next up is this awesome picture. Using a CRT/Scan line shader, I was able to emulate the feeling of old CRT devices to give a genuine retro feel. However, this most likely will not make its way into the final version of the game. If it does, it will be optional and you will have to activate it in the options menu yourself, as some players may find it annoying.

And now for some original images never before seen!

After what seems like literally forever, the backpack mechanic is fully implemented. Here's a bit of a refresher of what backpacks do:

Each player spawns with a different colored backpack equipped. Without a backpack, you can hold up to $1000 cash, 1 weapon, 1 medkits, and 100 reserve ammo. With a backpack, you can hold infinite cash, 3 (1 in hand, 2 off hand) weapons, 5 medkits, infinite keys(used to open locked doors) and 250 reserve ammo. Backpacks can be dropped and traded with other players. Since they can be traded, there are many possibilities for player cooperation. It allows players to basically transfer their weapons, ammo, cash, medkits, and keys between each other constantly, allowing for a lot more strategy in later waves and in harder gamemodes.

Please note, however, that while a backpack is not equipped the reserve ammo/cash UI in the bottom right will not be visible! It is also important to let everyone know that the reserve ammo pool is shared by ALL weapons that require ammo, so individual ammo will not have to be bought for each weapon you hold!

The default key for throwing your BP is "V" and the default for picking it up (and interacting with objects/npcs in some maps & Arcade mode) is "C". 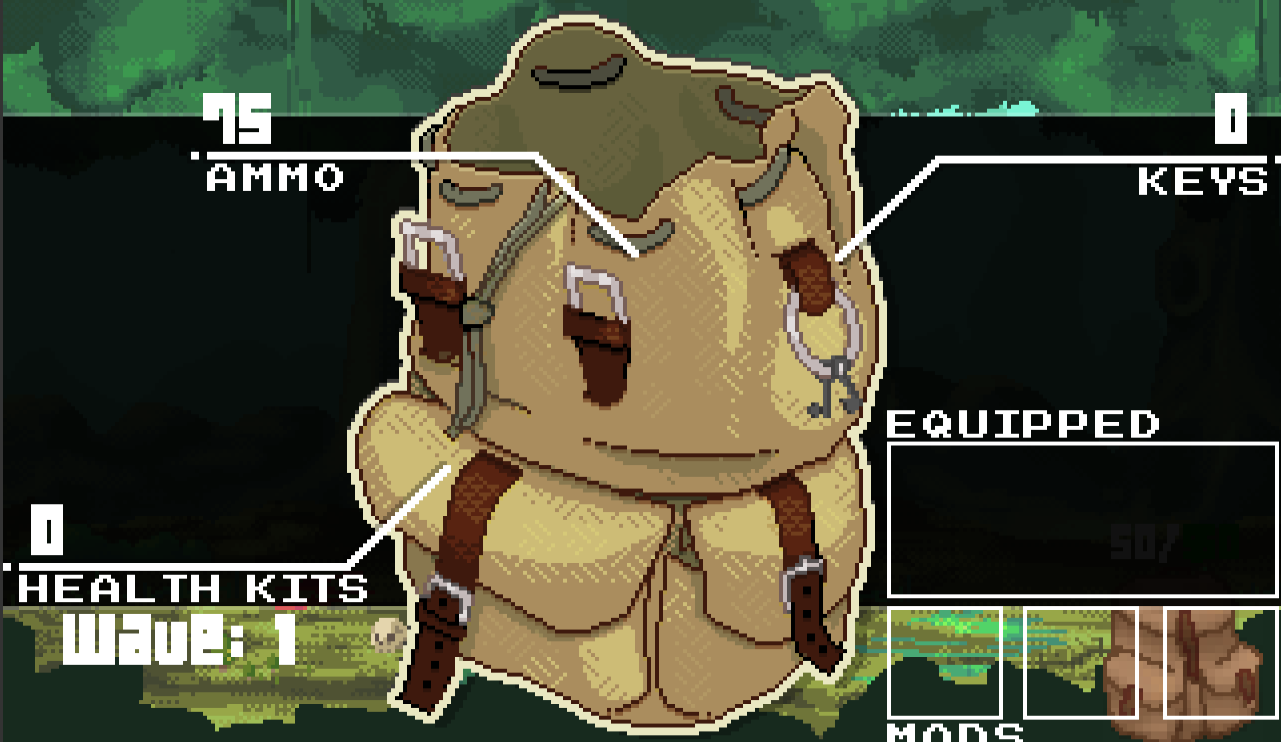 Shown here is the in-game implementation of the menu. You can see this by holding tab, and it will only be visible while tab is being held. The only part not shown here is the weapons. Your equipped weapon will appear in the equipped box, with its respective mods below. Any other weapons you own will appear in the left side of the menu, in the black space between the ammo and medkits labels. You can click or use the scroll on your mouse to switch weapons in this menu. Also, it is important to note that the ammo counter combines reserve ammo with ammo currently loaded into your gun.

Other changes since the last version I do not have screenshots for (or are not as interesting) but I can talk about anyway. The options menu has been tweaked a bit. I was having problems with resolutions, but it is now fixed. The video options in the menu now has a slider to select window size, which is only available when not in full screen. There's also an option to disable surfaces for older, less powerful computers. This will severely mess up window scaling for the pixel graphics, but will make the game run faster on older systems. There is nothing I can do about this at the moment, but I am looking for a fix.

I have also tweaked many of the AI's, and I continue to do so. Spitters and Disablers no longer flip out when they cannot come into a good range to the player, and will explore alternative ways to spit at or grap the player. Both are now handled using collision lines instead of distances, which means that the disabler will only attempt to grab you if it knows there is a chance to. Other changes include better detection of solid objects, for which it will find an alternative way to catch you. I've also increased the chance for Tanks and Berserkers to spawn by default, which before now was only 3% apparently. Who knew, haha. Other zombies now have better pathfinding and should now never, ever get stuck trying to find the player.

Now that I've talked about the technical aspects of game development, I'd like to talk about some of the other aspects of it, as a sort of new years reflection for 2015. This might not be too interesting, but I thought I'd share my current standings if anyone was interested.

When I started this game a long time ago, I really had no idea what I was doing. I'll be completely honest. I was a good programmer and knew a lot about the technical stuff, but business wise I had no idea where to begin. I'd only ever worked on small projects and helped others with theirs before this, so I wasn't 100% prepared for what was coming. I was also young (It was the summer of 8th grade I started working on this. Note that I'm only 17 working on this now, and this is the second iteration since the first prototype was lost when my old hard drive died) and I was naive. Looking back, I made so many mistakes in this game's development, It was hard for me to say that I was a competent developer. But now, I'm actually quite proud, although that may seem narcissistic. I now own a business, Top Hat Studios Inc, and I'm in contact with a publisher who's willing to give me the push I need (and some other helpful stuff) to finish the game. I've been working harder lately than ever on this game, despite the stress that's been looming over me from working my part time job and going to school. I think I've found that I really do have a strong resolve to become a game developer, and I'm happy I was able to learn for the future, so I won't commit any of the mistakes on my future games that I've already committed on this one. I'm beyond excited to know that Double Death will be coming to steam within the next few months and others will be able to play it, and I'm even more excited to know that even with this is done I'll be able to work on different projects. I've met some really awesome people because of DD, and I'm happy with the game's direction. While I'm waiting for a few more days or so to finish some stuff up with the publisher and the last pieces of art for the game, I've been stressing out more than ever since replies are slow because of the holiday season. However, 2015 is still looking bright and I'm excited about everything that's waiting on the horizon.

Also on a semi-different note, I'm finally revealing our musician (not sure if I've done it before): Soundcloud.com
He's an awesome musician who's providing the SFX and Music. Go check him out, he's amazing!
Here's his twitter as well: Twitter.com