Starstreak is a close-range anti-air guided-weapon system for use against helicopters and high-speed ground attack aircraft.

The Starstreak High Velocity Missile (HVM) system is a close range surface to air missile (SAM), which has the capability to engage lightly armored land vehicles although the missile's main strengths is when combating air targets. 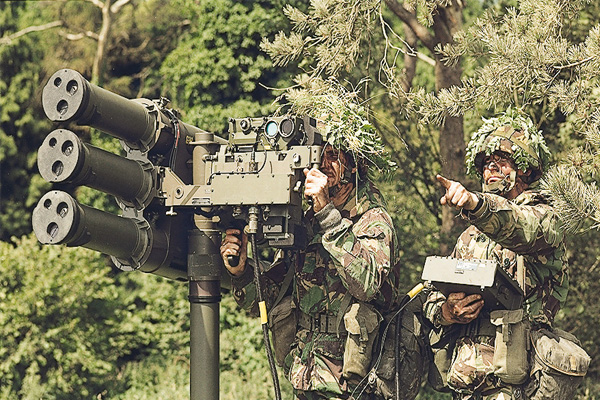 . After launch, the missile increases speed to roughly Mach 3.5, upon which it starts on three laser beam riding sub-munitions. The use of three sub-munitions adds to the probability of a definite hit on the target. 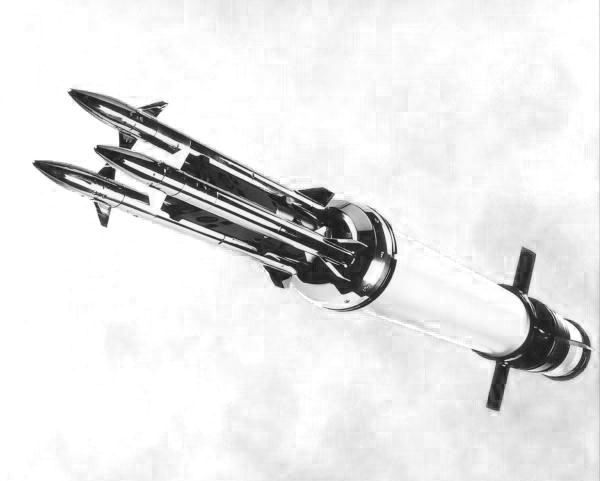 The multimission system (MMS), which is a lightweight vehicle-mounted turret system, which can be equipped with the Starstreak and / or other missiles including anti-armour missiles or rocket systems. The system has automatic target tracking and can be integrated into a network-enabled force structure. 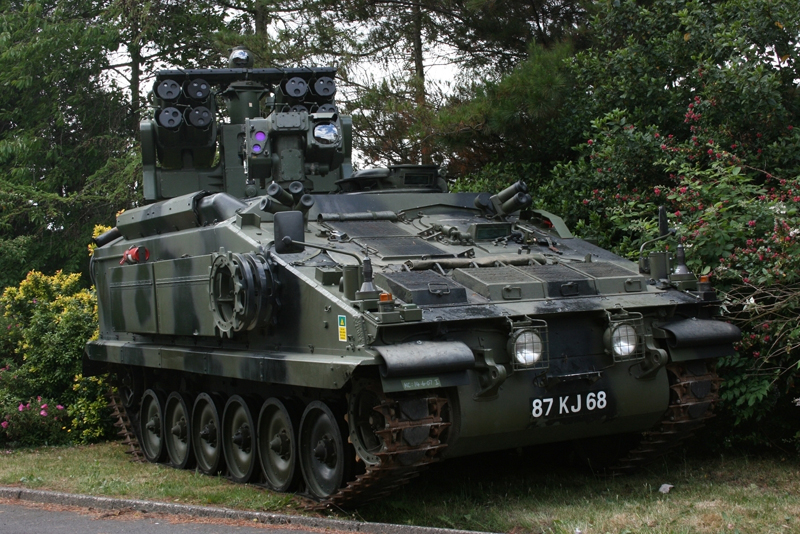 The Starstreak SP HVM is mounted on a tracked BAE Systems Land Systems (formerly Alvis) Stormer vehicle. The system has eight rounds of Starstreak missiles ready to fire, with a further 12 missiles carried. SP HVM is fitted with a roof-mounted air defence alerting device (ADAD). ADAD's infrared scanner and processor provide target detection and prioritisation, and the system automatically slews the weapon sight onto the target. The use of ADAD requires that the vehicle be, briefly, stationary. 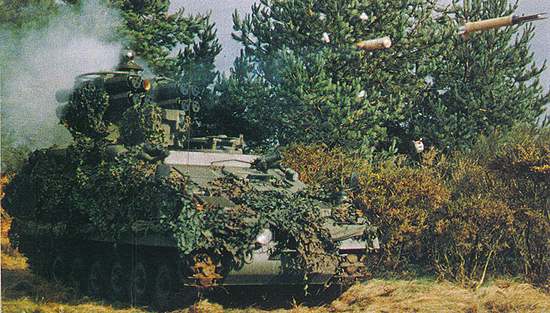 The portable shoulder-launched Starstreak is assembled and ready to fire in a few seconds. Preparation for firing involves clipping an aiming unit onto the missile canister. The starstreak missile countermeasure aviodance gives it advantages compared against infrared directed, radar guided, and radio control MCLOS/SACLOS missiles. The HVM cannot be blocked (confused) by plain flares (infrared countermeasures - IRCMs) or by radar / radio countermeasures. The AN/ALQ-144 or AN/ALQ-157 systems used for helicopter defense, shall not, in theory, countermeasure the Starstreak High Velocity Missile.
Anti-radar missiles do not have the capability to intercept the Starstreak, the high velocity of the device decreases the time for successful employment of any probable countermeasure, such as the beam tactic or lighting the control laser origin with sight destructive combat zone laser. Finally, the direction-indicating laser has a small energy rank, which renders recognition (and, thus, countermeasure) more complicated for a laser detection receiver device. 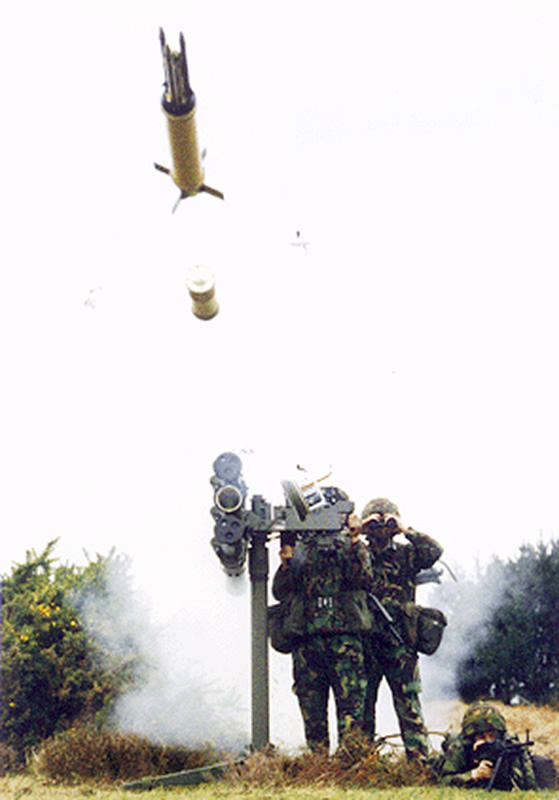 We can count five variants to the Starstreak HVM. One is the Starstreak SP HVM (Self-Propelled High Velocity Missile). It is fixed with a roof-installed Air Defence Alerting Device (ADAD) made available by Thales Optronics. It is transported on an Alvis Stormer AFV. The infrared scanner and processor of such device offer rapid target finding, while the system mechanically slides the weapon sight on the mark. The employment this device will for s short time call for the transporting vehicle to be at a stop. The second is the above-mentioned LML. It is triggered from a Lightweight Multiple Launcher (LML) including three missiles set for firing. One can use it as a stationary launch device or placed on a light motor vehicle, for instance a Land Rover.
A third variant is MANPADS, which is transportable by man and the operator activates it from his shoulder. The man-transportable shoulder-launched Starstreak is put together and set to shoot in a small number of seconds. Preparation for shooting means snipping a target-seeking unit on the missile container. The fourth is ATASK (Air-to-Air Starstreak), which is activated while airborne, from a helicopter. Finally, the fifth is Seastreak, with two alternatives tried - one similar to the Lightweight Multiple Launcher and the other one being a move-in weapon device with no less than twenty-four missiles.

The Starstreak High Velocity Missile is carried in a closed up launch cylinder. For the purpose of firing, such a cylinder is connected to a target-seeking element. The one who operates the system follows the target by means of the target seeking element's optically steadied display. Once fired the first phase rocket motor ignites which launches the missile from the cylinder. However, it is exhausted prior to getting out of the cylinder - for the purpose of shielding the missile operator.
Once the missile is at a harmless distance from the operator, the second phase rocket motor will fire. This one quickly speeds up the missile to burn out speed of approximately Mach 3.5, at a distance of 400 meters from the operator. As the second phase is used up, the three dart sub-munitions are out. Each dart is made up of a revolving fore-body with two canard fins connected to a non-revolving back installation including four fins. In addition, the back installation contains the electronic components that direct the missile device. The missiles are controlled (for the indication of the direction) by two laser beams into a 2D matrix by the target seeking element. The laser is adjusted in relation to its situation in the anticipated medium. Such adjustment is identified by each of the sub-munitions. In this manner, it makes it possible for the missile device to find out any course-plotting adjustment. The sub-munitions turn by slowing down for a split second the revolving fore-body with a clasp. Next, the front arms guide the projectile in the proper direction. The three sub-munitions take off in a configuration approximately 1.5 meters in radius, and have sufficient kinetic power to move to hit a target dodging at 9G at 7 kilometers.
Once the collision with the target takes place, a delayed action fuze activates, which makes it possible for the missile to break through the target before the unstable warhead sets off. The tungsten covering is intended to disintegrate and generate the greatest damage in the interior of the target.

Starsteak is not old you mean the first built i believe. The Starstreak II system was successfully demonstrated to the UK MoD in March 2008. The upgraded launcher and missile were tested in November 2010. The system was showcased at the IMDEX maritime defence show in May 2011.The system will be tested in 2012 and production will start by end of 2012. Deliveries will begin in 2013.