If you are enjoying the pineapple tarts and bak kwa (Chinese salty/sweet dried meat which is similar to jerky), happy chinese new year! In this joyous festival season where you should be eating most of the time, Eating has arrived in the latest update for Starsss!

If you are enjoying the pineapple tarts and bak kwa (Chinese salty/sweet dried meat which is similar to jerky), happy chinese new year! In this joyous festival season where you should be eating most of the time, Eating has arrived in the latest update for Starsss! 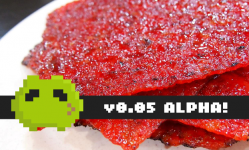 Eating - The Health Tank
Eating is the latest character to join the family of playable characters in Starsss! She looks like she is always stuffed with food and as a result, she does have quite an amount of health.

To play Eating, you will have to collect at least 99 stars to unlock her. I'll have to apologize first but there aren't any in-app purchases which allows you instant access to Eating. This means that you actually have to spend more time playing the game to accomplish unlocking Eating! 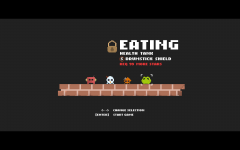 Better Gameplay Experience
In addition to adding Eating, the characters are now more responsive to the game controls! This is accomplished by removing inertia from the characters when you stop moving them.

This change ensures that you do not fall off the platform edges unintentionally and get damaged by enemies. With improved game controls, you will also feel that the characters respond better to you changing directions.

Pausing The Game
On top of that, you can now pause the game by pressing your escape (ESC) key! When you pause the game, everything stops and this is what you will see.

When the game is paused, you can go back to the character selection menu (via Q key) if you ever so wanted. However, do remember that by doing so, you will have to start the game from the beginning.

And if you ever needed to get away or shut down your computer, you can quit Starsss (not recommended though) just by pressing your E key.

Next?
So what is coming next for Starsss, now that Eating, the 4th character, has been added to the game? To get a sneak preview of what's coming next, check out the YouTube video down below!

You can get Starsss v0.05a directly now from WhiteSponge! It is currently on sale so be sure to grab it as the price will only go up when more game content is added!