It has only been a short few weeks but the next update to Starsss is on its way! Say hello to the upcoming v0.03 Alpha!

It has only been a short few weeks but the next update to Starsss is on its way! Say hello to the upcoming v0.03 Alpha! 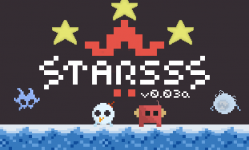 So what's new with the upcoming v0.03 Alpha update? If you have been following the past few blog posts, you might have guessed it by now. 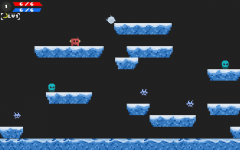 Yes you will be able to play in the new ice world! This new world brings with it new enemies with quirky behaviors and powerful abilities.

For example, the Angry Furball moves by bouncing around and attacks by throwing snow balls that goes in a curve-like manner.

In stark contrast to the Angry Furball, the Mutant Cube is an enemy that does not move but has the ability to stun you.

In addition to the new enemies, the ice world is an entirely different environment that you will have to get used to. As the platforms are slippery, it is also much harder to move and jump around.

So besides the new ice world, there are also a few gameplay changes and bug fixes made to Starsss. For example, remember the animation that shows whenever you level up? Now it will follow you wherever you may go!

And here are some of the other fixed bugs and gameplay changes:

And this new update will be available just 7 days from now, on this coming 16th January!

You will be prompted to download it when you start the game but if you don't own it yet, you can get the game now from the WhiteSponge store at a discount!

Be sure to also vote for Starsss on Steam Greenlight! And if you missed today's live stream, check out the recorded version now on YouTube! Enjoy and look forward to 16th January for the new v0.03 Alpha update!