2015 marks the start of a new year and that arrives in the form of something big in Starsss - a new boss!

2015 marks the start of a new year and that arrives in the form of something big in Starsss - a new boss!

Before showing the first ever preview screenshot of the new boss, remember Big Teeth? 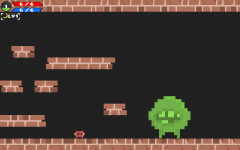 Big Teeth is the boss of the 1st brick world who will challenge your star-chasing adventure in Starsss. Apart from having really big teeth, Big Teeth has the ability to shake the entire screen just by jumping up and down!

While Big Teeth's stage is also procedurally/randomly generated, notice how the platforms are always on the left? 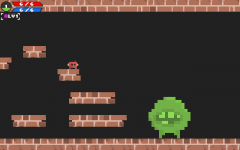 Now that you have that in mind, let's take a first hand look at the new boss who will be arriving in the new ice world! 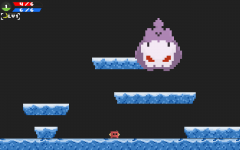 In stark contrast to Big Teeth's stage, the stage for this ice world boss only has platforms on the lower half of the screen. And that's because you will be facing a new boss who flies around while trying to bring you down.

Notice how the ice shards home in on your current location? This means that if you just stay at one spot constantly, you will get defeated pretty fast. On top of that, this is just 1 of the many attacks that this new boss can do (more to come soon) ! In other words, you can expect this new boss to be many times more challenging than Big Teeth!

So what do you think of this new boss? Notice how we don't have a name for him yet? Suggest 1! You can do so via Twitter or comment below with a name for him!

Also vote for Starsss on Steam Greenlight so you can get the game from Steam too!

What? Can't wait? You can actually get the game now directly via the WhiteSponge Store!

Lastly, enjoy the 1st ever live stream of 2015 which is recorded and now uploaded onto YouTube! Have a great new year ahead!