Before doing that, there is something important that has to be added to Starsss - a character selection screen (not added yet)!

The character selection screen will show up when you have pressed any key from the game's starting screen. 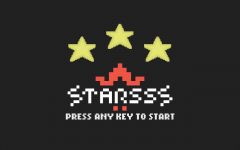 You will also be able to get to it when you press your enter / return key or do a left-click with your mouse on a game over. 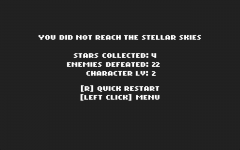 So the question is, how should the character selection screen look and feel like? And that's where sketching multiple versions in Photoshop comes in. 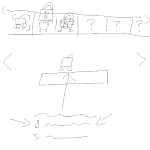 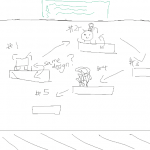 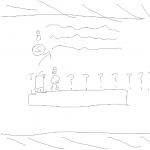 These are just a few of the sketches that were made to decide one that would fit the bill best. They were actually the end result of interaction and feedback going back and forth on the TwitchTV live stream (Twitch.tv).

Sketching allows you to quickly churn out ideas and stuff with the ability to quickly change a design. Just imagine actually adding it to the game and then having to change it again if it's not ideal. It would take considerably more time!

On the character selection screen, you will be able to select a character to start the game with. While doing so, you will also be able to see each character's information such as the name, unique characteristics (e.g more health/mana, faster moving speed) and their special move.

Yup each character will have his/her own special move! Apart from their characteristic (e.g more health/mana, faster moving speed), each character's special move is essentially what differentiates them from one another.

As a reward for reading all of the above, here's a quick snapshot of the possible designs for the new and upcoming 2nd playable character! Do they remind you of snowballs? Think Christmas! 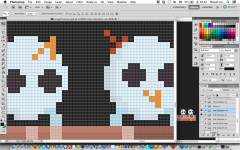 So help make the game a better gameplay experience for you by getting Starsss (v0.01 alpha) right now when it is on sale (65% discount!)! Doing so will entitle you to all future updates for free and a Steam key (when the game gets green lit).

You can also help by sharing the word about Starsss on Steam Greenlight and voting "Yes" for it (only works if you have the Steam Client installed)!

Last but not least, check out today's live game development stream session that is now uploaded onto YouTube! Enjoy!