To start things off, this is what happens when you use an ability to attack in Starsss now.

With the screen shaking and the player pushback (recoil), it feels better than if there wasn't any. However, notice that when the projectile hits the wall, nothing happens?

So to bring it 1 step further, let's add a hit effect to it!

From adding the hit effect, you can immediately tell that your projectile has hit the wall. This immediate visual feedback allows your brain to process it as "Oh I hit the wall" instead of "Wait… where did my projectile go?".

It is also the same as when your projectiles hit an enemy.

Along with the enemy blinking red, the hit effect serves as a visual reinforcement, telling you that you have successfully landed an attack on the enemy!

In addition to adding a hit effect, there is something else that is long overdue - a death animation! Currently, if you were to be defeated in Starsss, this is what you would see. 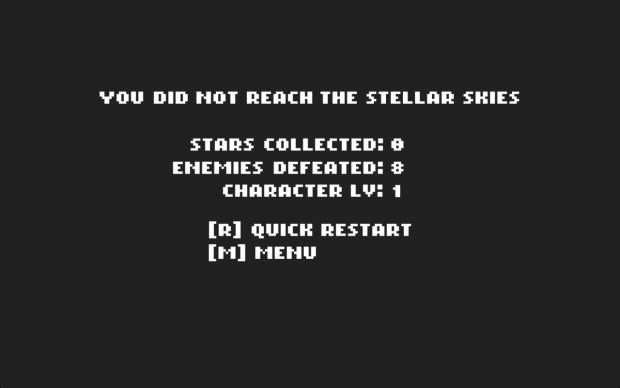 However, in the upcoming update (for both demo/full versions), you will get to enjoy your death in the game.

How do you like the new death animation? Remember that a new update for both the demo & full version is coming this week! Be sure to follow the Twitter channel for when that happens!

If you can't wait for that to happen, you can also first grab the game now!

And for a preview of what new animations will be added to Starsss, check out today's live TwitchTV stream! Cheers!