Ever since mana has been introduced to Starsss, all sorts of new possibilities were opened up! Abilities now cost mana to use while enemies begun dropping mana orbs for you to replenish some mana. And so that begs the question - what happens when you run out of mana and there's no mana orbs in sight?

Ever since mana has been introduced to Starsss, all sorts of new possibilities were opened up! Abilities now cost mana to use while enemies begun dropping mana orbs for you to replenish some mana. And so that begs the question - what happens when you run out of mana and there's no mana orbs in sight?

When that happens, you would become much vulnerable to enemies as you would be unable to use your abilities. And so that opened another new possibility - mana regeneration!

After a set delay period, your mana will regenerate by 1, giving you the ability to at least use wave to attack. From play testing several times, around 10 seconds between each mana regeneration seems like a delay that isn't too unbalanced. Just imagine what would happen if the delay was set to something like 1 second.

If that were the case, you would be able to use your abilities all the time. And that would directly make you overpowered in comparison to the enemies you will face. There isn't any fun or challenge in that right? 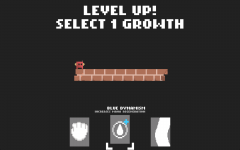 Remember that short delay of 10 seconds between each mana regeneration? Learning blue dynamism removes 3 seconds from that! So if you want to be able to attack frequently, be sure to learn blue dynamism when it pops up on the character growth screen!

And so now you will be able to regain your used mana (mp) via both mana orbs and mana regeneration. But what about health?

Unlike mana, health has a heavier impact as to how it can directly upset the balance of the game. Death is also permanent in Starsss, so passive health regeneration is a definite no as it could possibly make you severely overpowered. And so that leaves the next option - health orbs.

While health orbs can now be dropped from enemies, the rate or chance of them dropping is drastically smaller than that of mana orbs. This prevents you from getting overpowered with a steady supply of health replenishments.

But there is always good news with each update for Starsss! If you have learnt Lucky Palm, which increases the chances of enemies dropping loot, you will also have an increased chance of getting health orbs!

And there are even more good news! Starsss is now on Steam Greenlight's Concept section! Be sure to hop over there and rate it!

While the development of Starsss has been underway for around 2 months, it is still considered to be at a pre-alpha stage. So if you were wondering if Starsss would ever be on Steam, yes it will! It will be posted to Steam Greenlight once the alpha playable version is out!

And you can also check out the behind-the-scenes of how they were added to the game on TwitchTV! Enjoy!