Merry Christmas! Did you have a great celebration? A few posts back I shared about the 2 enemies that have been added to the new ice world. However, 2 more new and powerful foes will be joining the fray and making their appearance today!

Merry Christmas! Did you have a great celebration? A few posts back I shared about the 2 enemies that have been added to the new ice world. However, 2 more new and powerful foes will be joining the fray and making their appearance today! 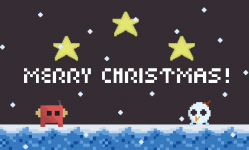 The Mutant Cube
Unlike the enemies that you have seen thus far, this aggressive-looking fellow has his head floating on what seems to be a small platform.

The mutant cube can also be considered as a stationary defense as it does not move at all. And while enemies usually attack by shooting projectiles at you, the mutant cube attacks by launching its entire head at you!

Notice how getting hit by the mutant cube's head caused you to get stunned? The mutant cube has the ability to stun via shooting its head at you! Once you are stunned, you will be unable to move, attack or jump. So be sure to avoid it if you do not want to lose a huge amount of health because of that stun!

The Frost Wraith
Similar to the Ghost from the brick world, the frost wraith has the ability to phase out into the background. And when it does that, your attacks including special skills, will have no effect as they will just go right through it!

On top of that, the frost wraith also has the ability to slow you down! If it manages to catch up with you or touches you, this is what will happen.

When slowed, your running speed will decrease and your jumping ability will be severely reduced! This means that if you get slowed, you will find it harder to jump or run away from danger.

Thoughts & Steam Greenlight
So what do you think of these 2 new additions to Starsss? Do you like them? Or do you feel that they seemed too overpowered?

Remember that Starsss is also on Steam Greenlight! So vote for it to be able to get it from Steam!

Be sure to also grab the game while it's still on sale! You will be able to save almost 65% of the original amount by doing so! If not, share the word about the game with your family and friends! Any bit of support is really appreciated!

Last but not least, check out today's live stream TwitchTV session now uploaded onto YouTube! The interaction with everyone who dropped by was awesome!