With RPGs, you can level up your characters from defeating enemies and gaining experience. Now while Starsss is not really an RPG, it is what many would call a roguelite, which also has that same character leveling aspect.

With RPGs, you can level up your characters from defeating enemies and gaining experience ~ Now while Starsss is not really an RPG, it is what many would call a roguelite, which also has that same character leveling aspect.

In Starsss, each enemy that you defeat goes towards filling up your green experience bar (located at the top left). 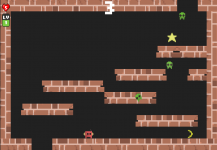 And when you have leveled up before clearing the stage (getting the 8 stars), the growth scene will be shown right after you get to the door. 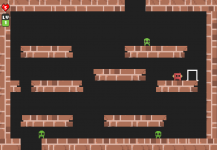 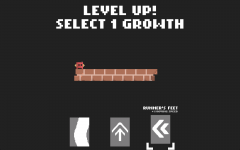 At the growth scene, you will be able to choose from a total of 3 randomly decided growths for your character. You can use your directional keys (left/right) or even your mouse to hover over different growths to see their description though. Pressing X/Z/Enter or doing a mouse click will make it final though. 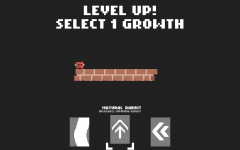 And once you have done that, the game will apply the growth to your character and you will be able to test its effects on the next stage! As an example of what growths does to your character, here’s a before and after comparison to illustrate that.

Noticed that you can jump higher than before after learning Natural Rabbit? The same goes for Runner’s Feet.

Lastly, there is Thick Skin which adds 1 to your health (HP) so you can last longer in game. 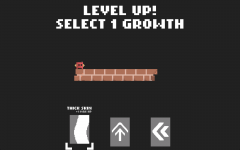 There are only 3 growths at the moment but more interesting ones are on their way! Of course If you have any suggestions, don’t hesitate to also share them below in the comments below or on Twitter.

And as always, the TwitchTV live game development stream session has been recorded and is now uploaded onto YouTube below. Enjoy!