Having RPG elements means that it is essential for Starsss to have some sort of game saving capability. Read on to find out more about what is saved in Starsss and about the game's first ever enemy!

Having RPG elements means that it is essential for Starsss to have some sort of game saving capability ~ As a roguelike, it shouldn't save the entire game or character progress as each play-through starts from the beginning.

So if that is the case, what things in Starsss should or can be saved? Besides game or character progress, things such as whether it is your first play-through or not are important too.

Why is that important? Because even though Starsss isn't really a complex MMORPG type of game, there are things that still require introducing. Things such as using your directional keys to move your character or using your Z key to make your character jump are just a few of them. 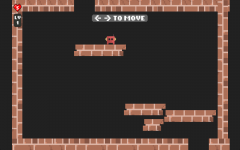 Noticed the newly designed tileset? And so once Starsss has detected that it is your first time playing the game, it will show you some helpful hints to guide you along the way. 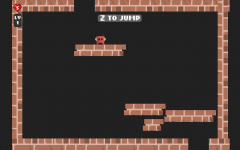 On top of saving and loading your game data in Starsss, it is also time to introduce the game's first ever enemy! 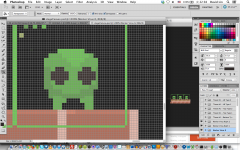 Enemies in Starsss come into play when they attack you or when they become an obstacle for when you are trying to get that star. You will also be able to gain experience from defeating them (not implemented yet). Once you have leveled up from doing so, you will be able to grow your character so look forward to that!

Hey, if your having trouble with the collision detection I would read this article : Games.greggman.com Since your using rectangle cells as walls it will be perfect. The gist of it is to use, not the character as the collider, but four or five small points placed at the head, feet, and sides. That way any velocity is much easier to predict for. Also, I found that using while(colliding side) loops to increment the player's position out of the wall was the most stable and visually pleasing. There are even better ways but you would need to study trig.

hey thanks for the tip! I think my focus now is on the random placement of the platforms as each platform has to not collide with another and it must be reachable from another.