Imagine having the power to create worlds. What kind of world would you create? And that is the question that I ask myself whenever a new world is added to Starsss.

Imagine having the power to create worlds. What kind of world would you create? And that is the question that I ask myself whenever a new world is added to Starsss. 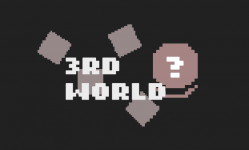 When you start your star-chasing adventure, you will encounter the first world - the Brick World. 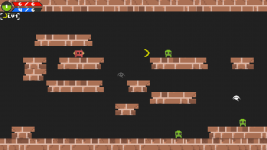 The Brick World is filled with enemies that range from the basic Green Virus to the Fading Ghost.

If you somehow manage to defeat Big Teeth, the boss of the Brick World, you will be able to advance to the next - the Ice World! 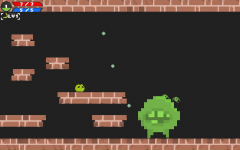 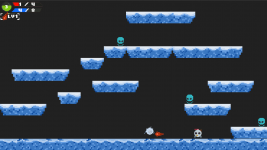 In addition to housing powerful foes, the platforms of the Ice World are also rather slippery.

As with the Brick World, defeating the boss of the Ice World is what will get you to the next world. 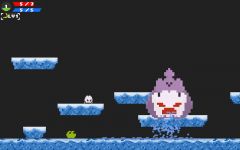 And so let's go back to the question - what type of world should come next after the Ice World? Before getting to that, there is a hidden story in Starsss that I have to reveal.

(WARNING: SPOILER TEXT IN WHITE BELOW, HIGHLIGHT TO SEE)

Remember how the Brick World has a ceiling on the top edge but the Ice World has none? This is because you are actually venturing from an underground facility (Brick World) to above the surface, which has been overtaken by a new ice age (Ice World).

And from the Ice World, let's go on to the next - the Metal World! 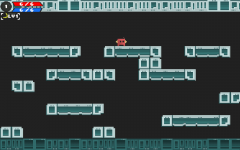 But wait… where are the enemies? They are actually still in my brain, waiting to be released into the world...

Want More Worlds?
Help support Starsss by getting the game now! You can also help to upvote the game on Steam Greenlight! Your continual support will help ensure that your star-chasing adventure continues on even from the Metal World!