Starpoint Gemini 2 all-out triple news bit: A new update is out, Secrets of Aethera DLC is launched and we've got a nifty 50% discount on the game on Steam!

Posted by DanijelMihokovic on Feb 18th, 2015

Yet another update for SG2 arrives today. We've been hard at work putting it all together for our fellow captains. The update brings quite a bit of new things (Ion storm, side missions, shield charger structure...), along with some fixes.

The full changelist for the update can be found below, but that's not the only thing going on today...

Secrets of Aethera DLC is out now! 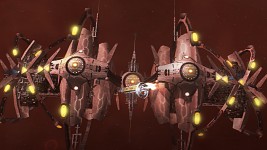 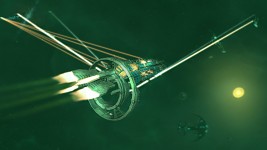 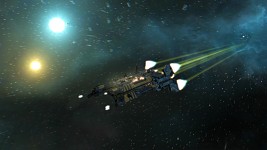 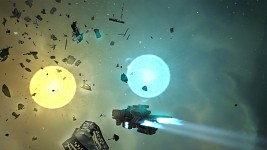 Secrets of Aethera is a nifty little bundle of action and joy:

You can find more details on the Steam store page.

And finally, this all comes at the same time as a nice temporary 50% discount on Steam!

Back to the update of the original game...

CHANGE LIST
FIXED: A bug that could trigger a constant loading of new video files, without first releasing the unused ones
FIXED: An error that could in some instances cause asteroids to render improperly
FIXED: A rare crash bug that happened when the player chose maximum weapon energy or shield energy in the energy transfer panel while affected by an engine dampener anomaly.
FIXED: A problem with the drydock turret button that caused it to become permanently disabled
FIXED: A bug related to Freelance mission generation that could in some instances cause the game to crash
FIXED: A visual bug related to very bright or very dark ships
FIXED: Several errors in the Assembly editor
FIXED: Several minor errors on Taxy and Ferry Freelance missions
FIXED: Side mission HUD icon is now identical to the log icon
FIXED: Side mission markers are now properly shown on the Starchart, when the mission is acquired
FIXED: Various minor errors that could appear when using controllers
FIXED: A minor error with Thaddeus Malen hero definition file
FIXED: A minor bug related to audio playback while anchored
FIXED: A minor database error in the Russian localization
FIXED: An error where a notification did not always appear when exiting a wormhole even if an event occured
ADDED: Ships can now be added using global parameters instead of only local (region-based)
ADDED: Automated repair facilities, artefacts, shield chargers now have special individual Starchart icons for easier recognition
ADDED: Ion storm global event can now occur
Be careful when entering Ion storm. It's discharges can severely damage your ship
ADDED: Ion Storm now encompasses the Maelstrom region
Maelstrom can be a good source of Ionized gas which you can sell for profit
ADDED: Numerous side missions, mostly faction-related
Side missions can be triggered in various ways
Appearance of side missions is linked to both Reputation and player level
ADDED: Bounty hunters of the Gladius Group now hunt for the player if his/her reputation is Outlaw
The lower the reputation, the higher the chance of appearance
Chance is automatically higher in some regions
ADDED: Shield charger structure is placed in the world and can be used in the same manner as Automated repair facility (enter it...)
Charging your shield costs Credits
Simply enter the ring-like structure to start charging your shield. Credits are automatically deducted
ADDED: Regions now become more difficult in several stages
First switch occurs when player reaches level 30
Second switch occurs when player reaches level 60
ADDED: A third control scheme ONLY for Xbox 360 and Xbox One controllers
when starting the game, choose the Joystick/Gamepad scheme
this scheme has predefined controls configured specifically for these controllers
modifying controls in this mode is NOT possible!
ADDED: Several gameplay effects on anomalies (when scanned) and accompanying HUD warnings
ADDED: A specific side mission related script function to prevent bugs and glitches
UPDATED: Target locking of objects is now automatic when using gamepads.
Simply cross over an object with the targeting reticle to lock onto it
In combat, some objects are filtered out so they don't get in the way (you can still manually target such objects by cycling through available targets)
UPDATED: The in-game menu on the upper right (Starchart, Captain info...) is now hidden by default when using controllers. You can get the menu to appear by pressing the START button. This automatically pauses the game as well.
You can change which key is used for this action in the Controls Menu, command is called "Show Menu". This change allowed us to free up some additional buttons on the controller, like DPad Up/Down for Tactical Overlay/Align To Plane
UPDATED: Opening any panel/in-game menu/context menu pauses the game when using controllers
UPDATED: When boarding enemy ships, troopers are automatically sent when possible
UPDATED: Various hints and tooltips are added when using controllers (Drydock, Trader, Hiring... panels)
UPDATED: Hints when using controllers are no longer placed in the middle of the screen
UPDATED: Changing your avatar name when starting a new Freeroam game, when using controllers is now possible
UPDATED: Changing the name of your ship on the Drydock->Customization panel when using controllers is now possible
UPDATED: Autosave is now created when ANCHORING on a station/planet, NOT when leaving
UPDATED: On normal and lower difficulty levels, when boarding an enemy ship - all allied/neutral/mercenary ships will immediately stop firing on it, unless instructed otherwise by Marking the ship (via the Context Menu)
UPDATED: Starchart icons of collected Artifacts are greyed out
UPDATED: NPCs no longer attack a ship you're attempting to capture
UPDATED: Several minor changes in NPC AI
UPDATED: Several changes to the game text files
UPDATED: Increased level requirement for some events to occur when leaving stations or planets
UPDATED: Numerous smaller changes made to different files to make the Secrets of Aethera DLC possible and in working order. Modders are encouraged to cross-reference their files with the default game files
UPDATED: Added current contraband quantities so that players can decide whether they should pay the fine or fight for the valuable goods.
UPDATED: Stations now show faction-ownership changes
UPDATED: Several minor changes done to cloaked NPC ships
UPDATED: More distant stations now keep a more detailed info on commodity prices
UPDATED: Accepting quests is no longer possible when using T-Drive to open the Starchart
UPDATED: Player name is now displayed on the dialog panel
UPDATED: Add & Remove turret buttons are now exchanged with the Configure turrets button so it gives more info on what exactly is going on

To find out more on how to go about modding Starpoint Gemini 2, visit the Modding website and our own forum!