Hey
Im going to try and do one of these each week. I missed the one of friday, mainly because i couldn't decide what to do it on... Originally it was going to be the Starship Troopers Tech Tree, but i havn't gotthat far yet, and no one is helping me do one, so i figure ill just leave it be for now. In the end i figured a run down of all the old heroes will do..
Staring with Stargate 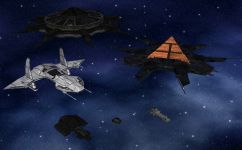 Tier 0a - General Hammond - Leader of the SGC, hes the faction leader...

Tier 0b - John Shepard / Rodney Mckay - Essentially R2D2. Shepard is the transport, hes in a hyperspace capable jumper. Rodney has the hack ability so hes the one that gets the new tech.

Tier 2 - Mitchel - Not in image - F302 Mk2, an F302 with an experimental portable asgard beam special ability. He was originally going to be a nornal 302, unitl i ran a contest and this idea won, so here he is lol.

Tier 3 - Prometheus - From Right - X303,
(In Canon) First space ship built by the Tauri. Refitted several times by both the humans and the Asgard. It was the best we had when Anubis made a play for Earth and we held of an assault squad protecting SG1 long enough to activate the ancient weapons, destroying his fleet. She eventually met her demise against an Ori satelite...

(In SFAW) A corvette class, good at countering tier 1s, all fighters and all bombers.

Tier 4 - Apophis - Back Right - Anubis Mothership
(In Canon) Apophis custom mothership. Capable of wiping the floor against most old hataks. Normally protected by a half dozen cloaked Apohpis Cloakable Hataks.

(In SFAW) It has the same power level as Yoda, not the strongest ship around but its still fairly powerful. Good enough to take on most ships below tier 4-5

Tier 5 - Anubis - Back Left - Anubis Mothership
(In Canon) Anubis's custom mothership has the firepower to destroy a fleet of Hataks. It was unstopable wiping out while fleet, scared of nothing, it eventually destroyed above Earth by SG1 and the ancient weapons platform.

Tier 6 - Daedalus - Front Left -
(In Canon) Daedalus was the first BC304 of the production line. It was designed with asgard tech already incorperated instead of it being tacked on after the fact. IT successfuly fought of two Wraith hives and there escorts above atlantis. But was out gunned when facing off against several hives later on. Several years later it was refitted with asgard beam wepaons. It it now one of the flag ships of Earths fleet.

(In SFAW) Hes meant to be a great leader, and the Commander of the Asgard Fleet. And a commander doesn't use a research vessel as his flag Ship, so he has a custom Oniell Mk2. It has asgard beam and Oniell mk1 weapons, more than capable of holding his own against any other ship.


Hope that clears up the stargate heroes...
any questions just ask

Just a few questions and some things I hope you will think about.

1) Can you change the Daedalus barrage ability to beam nuke ability? That was an awesome ability in sgeaw and would make the Daedalus cooler and a more worthwhile hero.

2) Will you be adding the Anubis super weapon ability to Anubis?
Cause all the hataks have power to weapons and the goa'uld heroes are only a little stronger and spawn a few more ships I never bother building them cause I find the normal Ha'Taks cheaper and faster and easier.

3) Is it possible to change Thor to the Daniel Jackson since you use the sgeaw 1.1 models? just cause I think its a good looking ship and it would be more suited to the sg universe if he was in the Daniel Jackson.

Sorry I cant help you with the sst tech tree if it was sg or bsg I could but I dont know anything about sst.

hey,
1) i tried to add the beam nuke ability and i couldn't get it to work, well itd beam, but it wouldn't do any damage and i gave up on it

2) His new ability is power to weapons, i cnat get him to fire his super particle (i can get him to do a beam like SGEAW but not a ball of energy like in the series)

3) Change thor, no, the Oniell mk2 has more hardpoints than the old one, so its added a lot of extra posibilites to his rool. Hes now, can take on a SSD without to much effort...

Hope that explains it

i did get the beam nuke ability to work in my own version. you just have to change the <Effective_Radius> to a greater number than it is, or it wont do any damage since it explodes at a different space layer (<Layer_Z_Adjust>). i think it will explode on the same space layer as the ship that uses it is on. if you change this it should make the projectile do damage.
i always liked the beam nuke ability better too :)

yeh, ill give it another go, ill just have to get round to it lol, ive got a long list of stuff to look at

What about adding atlantis units??? Like the city or the aoura class ship?
Since you have included the jumers. I reckon it would totaly improve the game :D aswell as adding a more diverse stargate universe feel within the game. But are you limited because of the other stargate mod?