Preparing Starfall Tactics for the Alpha: Economy, Colonization, Houses, New race, NPC Factions, and their role in the Universe.

In the beginning of 2016 we started creating a huge Galaxy Conquest mode for Starfall Tactics. Back then, there were only some planets, stars and dark space - the Galaxy was empty and looked just like the usual boring outer space: no warp gates, fuel depots, bases, pirates, stations, nebulas and even no asteroid fields. A year later we already have all of this and even more: colonies, freighters, pirate bases, Faction territory wars, House (guild) system, reputation system and some mystery fleets - still, all of this is just a basis for other cool planned stuff we want to implement and a good chance to test all mechanics. Now, after we precisely checked it in several tests with your help and chosen the right path for the MMO mode in Starfall Tactics, a lot of great features can be added. 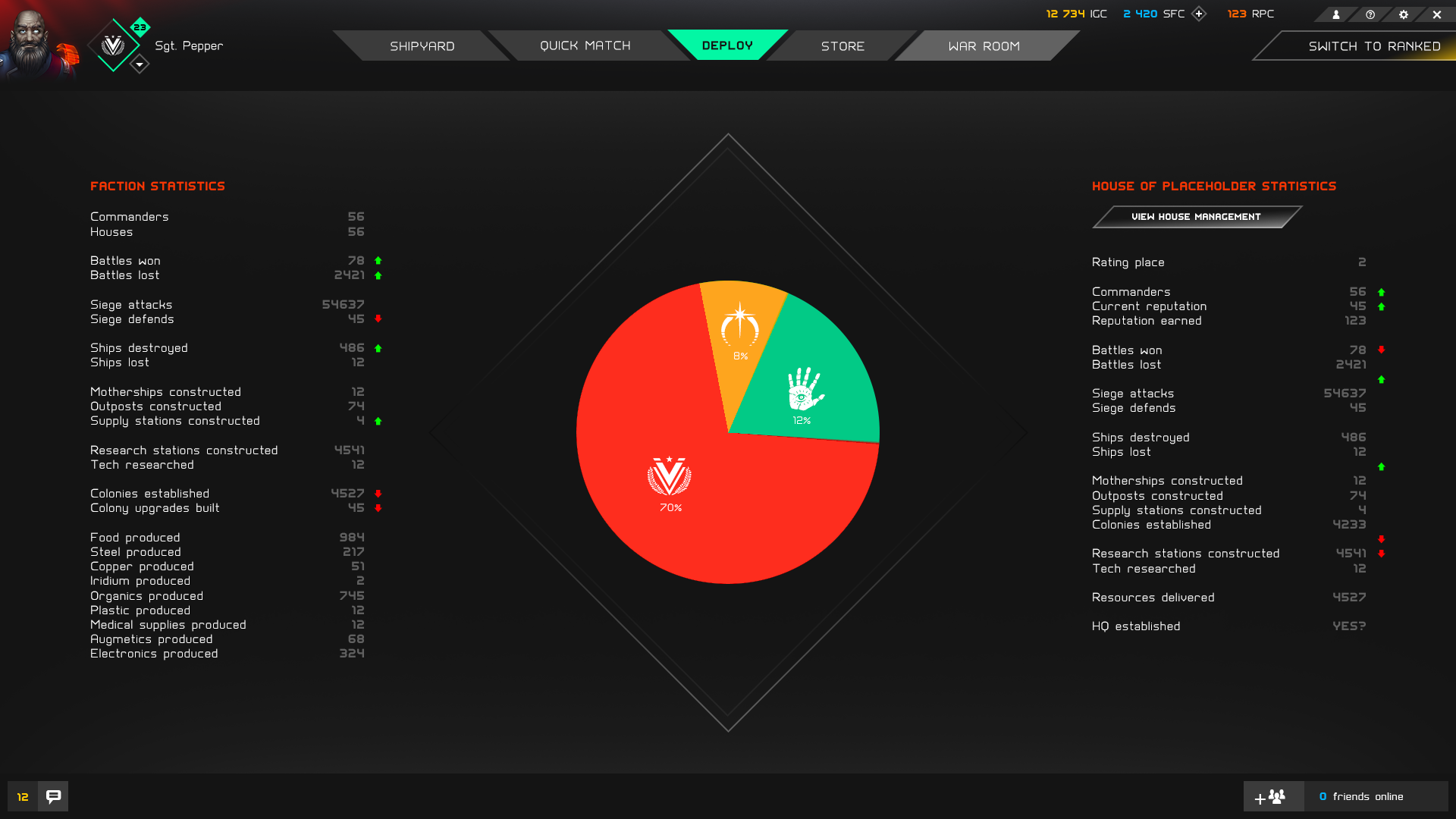 We already showed you a short list of upcoming features and you also can always check the Roadmap here. Still, here is a brief list of planned content for the MMO part of Starfall Tactics:

Some things here also involve a lot of related mechanics and work, and not everything will be implemented at once - some aspects will only be seen at later stages, beta version of Starfall Tactics or even at release - remember that we are constantly improving existing content and adding something new. So get ready for surprises!

Let's start from pretty unexpected additions: NPC factions which even include the whole new race. They are not just going to fight against you in random locations, but are also bringing new features and action into space. We have about 6 (do you feel excited, huh?) new factions in mind, so in this article we're talking only about the first of them and Pirate Faction changes. 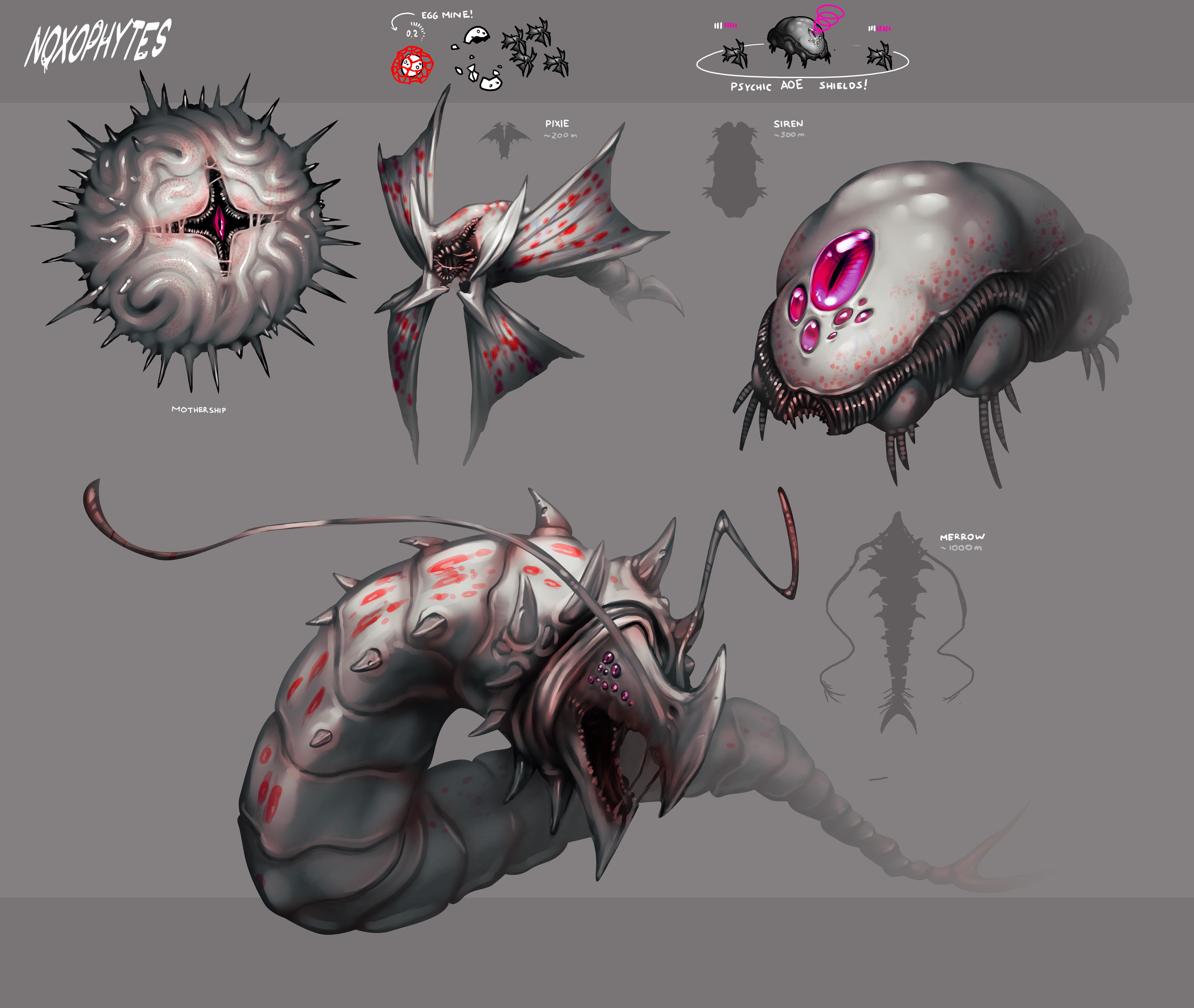 The first sketch of Noxophytes race

Imagine huge space creatures, which are able to survive and move in open space. And now imagine, how they playfully bite through your favorite battleship and infect the entire planet - these are Noxophites. Creatures so giantlike, that they even might not know that humanity exists.

Noxophytes are a race of space parasites, living on the border of the Galaxy and slowly spreading around it. It remains unknown, why they choose colonized planets as their targets - is it a conscious choice, or inhabited worlds are just casual victims on their way to saturation? However, since the first contact, these monsters are increasingly being noticed in habitable systems where they devour all that will not have time to get out of their way. However, their real target is not at all those fools who, by presumption or carelessness, risk to challenge these monsters - the way of the noxophyte always leads to the planet. A planet infected by such a parasite is doomed for a long and painful death, gently enveloping it from various sides, Noxophyte gradually "digests" it.

Nevertheless, there are rumors about Great Chieftain Khaeeti, who headed the united Deprived fleet, and managed to destroy the Noxophyte worm before he managed to infect the planet.

In Starfall Tactics, you have to fight against Noxophytes of various forms: from small treacherous frigate-sized creatures, to giant worms, which are hard to defeat on your own. Later we are going to show and tell about them - and now you can enjoy watching some sketches of these beautiful creatures!

"Dozens of pirate Commanders from all over the Galaxy fighting as one, side by side...it's quite a strange situation for this type of people!" - we once thought. So, the Team came to a decision to separate them into several huge bands with their own organization, ships, weapons and, in general, just different fleets and behavior.

They are still outlaws, trying to survive at the expense of others and get what they want by force: so they rob planets, attack civil fleets, raid faction systems and establish Pirate bases. But each band will differ from others in the following ways:

Of course, that's not full information about it - we are going to tell you more about each band later and show their fleet and buildings once they are ready.

Apart from these changes, we are planning to add more NPC factions, which will open new ways for interacting with the Galaxy - Traders, Smugglers and Miners.

Traders are busy with transporting resources and selling various goods:

Smugglers can already be seen in the game - that's them, controlling the Black Markets where you previously could purchase blueprints and sell dublicates. Now they are going to have more presence in the Galaxy, so get ready to see them flying across the Galaxy and doing their dirty business.

Miners are a faction of people who earn a living by mining, have their own special fleet for it and stations where they keep resources. They are peaceful and don't engage in battles, but still can defend themselves - however, you can try to rob them, attack a station or... partner with them to get some resources and other benefits.

Some factions will be implemented sooner, some - later, and with time we will be lifting the veil and bringing more and more curious facts about these factions, along with nice 3D models, concepts and, perhaps some background - get ready!

During a series of pre-Alpha tests we released the first version of Economy system, where the whole economy relied on resource distribution system and colonies built by players. Also, colonization of a single planet was a too easy task, which, unfortunately, didn't really reward its owner. Now colonization process is going to become a harder task, while colonies themselves become a more complex and rewarding thing for Commanders and Houses. In general, Economy in Starfall Tactics is going to rely more on interaction of Houses and Faction, than on automatic resource distribution, while still providing players with ways to earn and spend IGC. 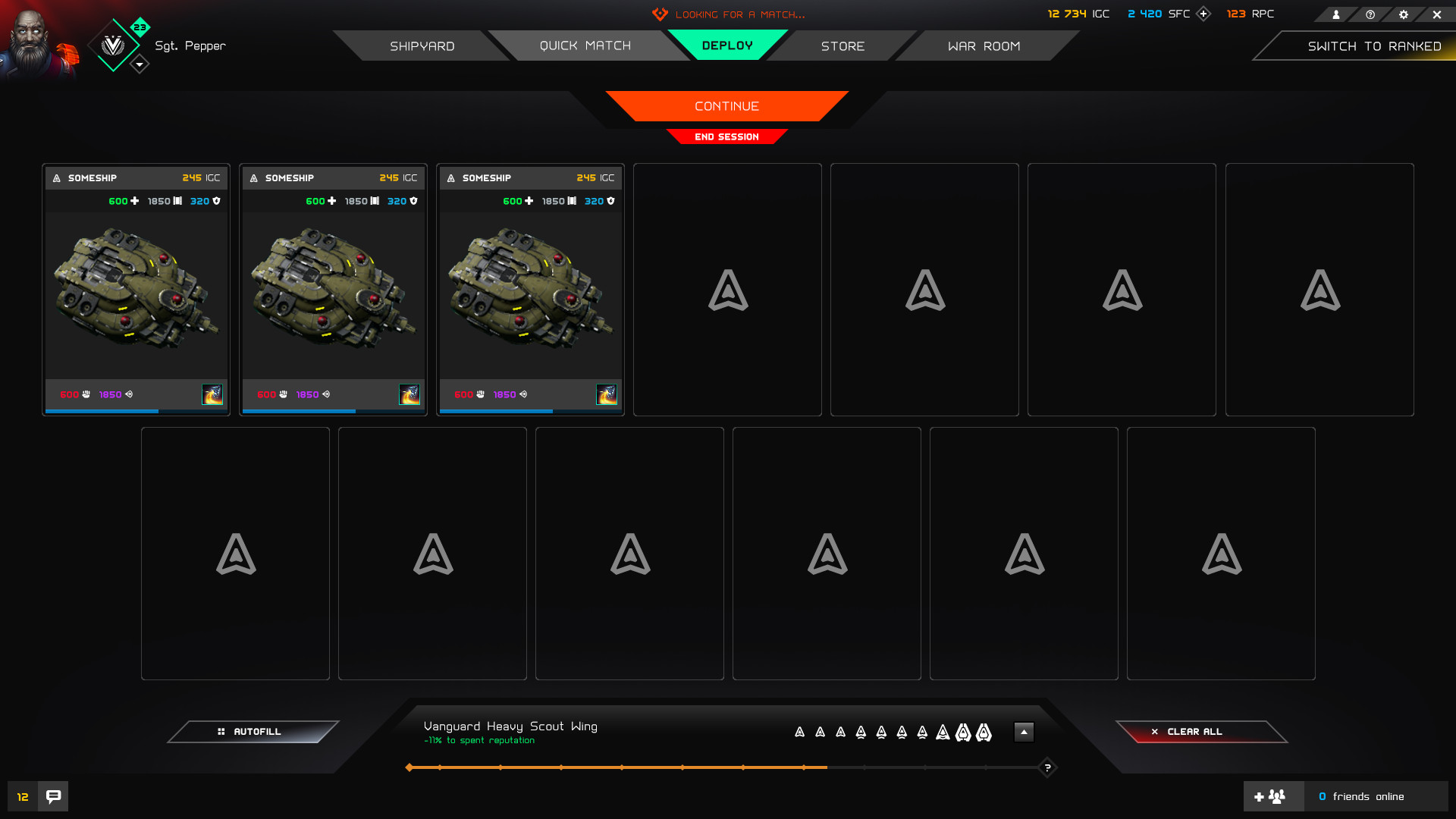 As we mentioned above, planet colonization becomes a harder and more interesting task at the same time with giving more benefits and options for Commanders and Houses who owns it. Yes, it is also a more personal thing. Now planets can be colonized only by Commanders who already are a part of a certain House and have a certain amount of IGC and reputation.

Colonized planets will have certain characteristics and parameters:

And if earlier Commanders, who established a colony, could not directly influence it (except of bringing some supplies and fighting pirates), now its owner or any member of the House with an access to colony management can set their rules: manually disable or enable the sale and purchase of any specific resources and goods required for the production or produced on this planet. 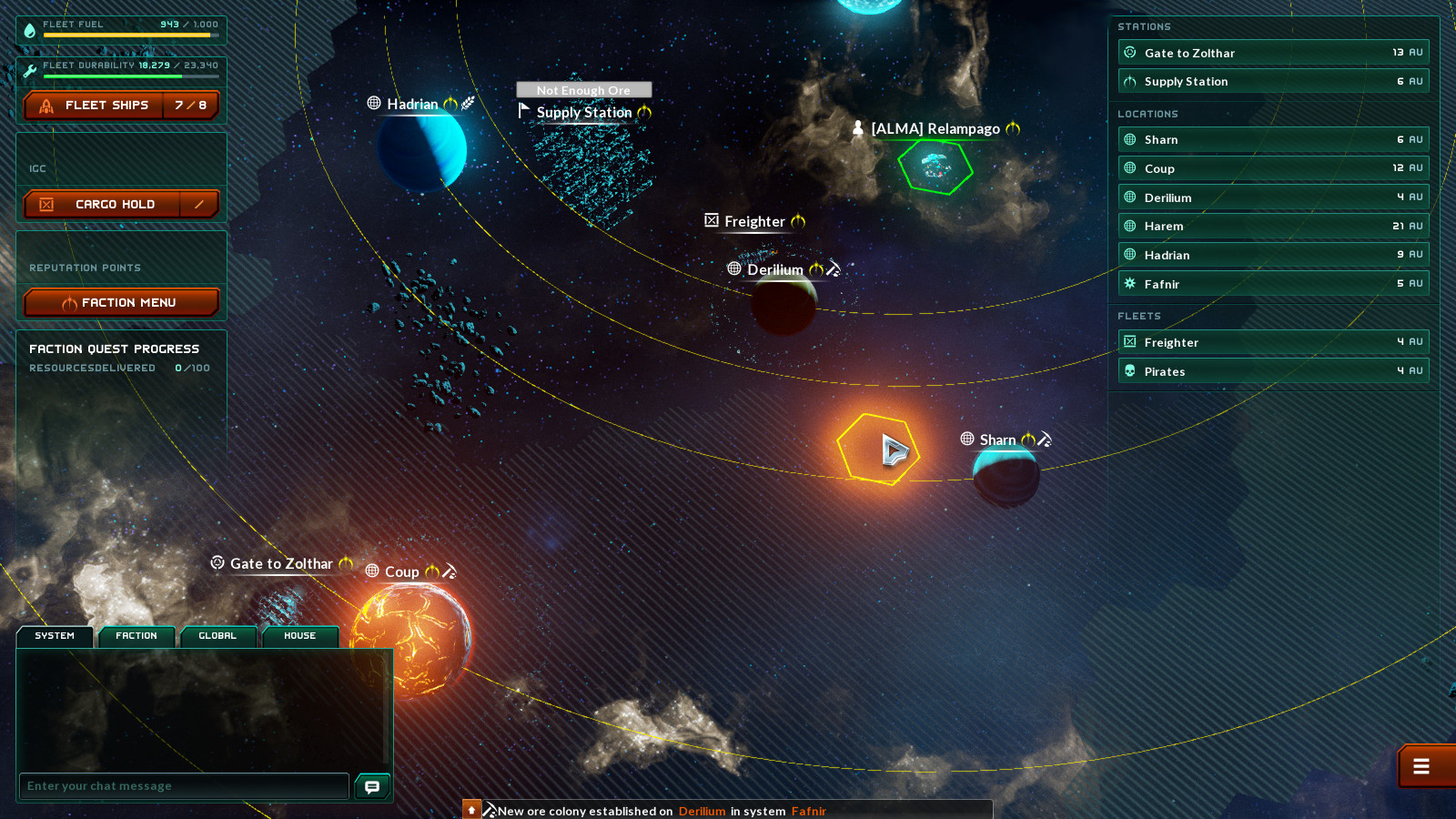 If planet needs resources, owner or any other House member with certain permissions can allow it purchasing resources from other players. In this case, any Commander from this faction will be able to come to the planet and sell his resources; and if you allow this planet to buy resources from faction, the planet itself will buy resources on nearby stations from time to time. Resource price is calculated automatically: depending how much planet needs it - for players, or on the average amount of this resource at all faction stations plus a small percentage.

As you could already guess (or simply read in previous articles), there are going to be a lot of new resources and ways to get them in Starfall Tactics. Resources can be spent on building new Stations, modifications and crafting.

Tier 4 production differs from other Tiers: in addition to generating resources, allows you to get good bonuses for the House and the colonized planet - for example, will allow your industry to develop a little better.

New resource system will greatly affect the significance of planets, resource distribution across the Galaxy and will force Commanders to take a more responsible approach to the protection of colonized planets and to House management - the fate of the entire faction will be in their hands. 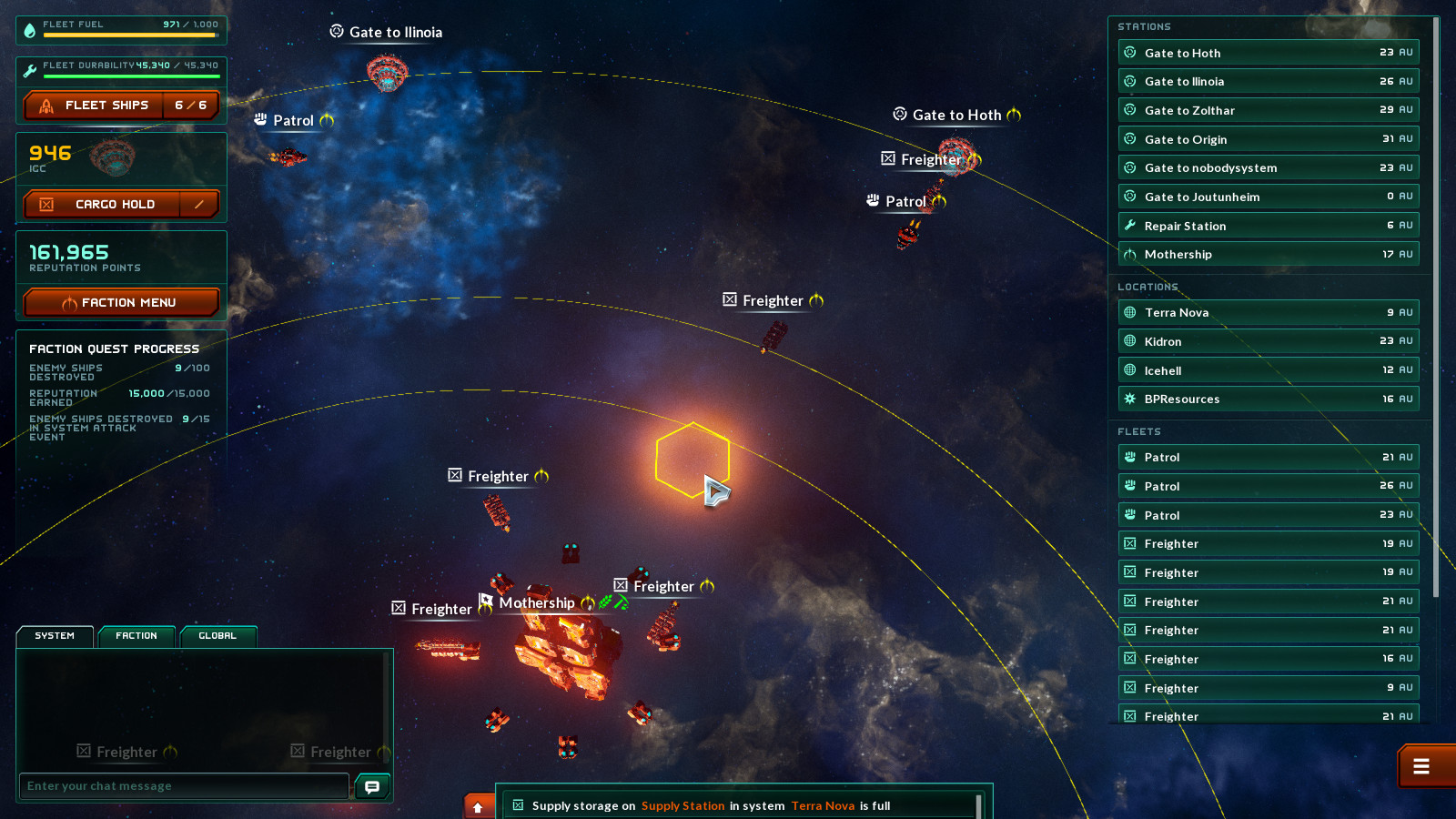 In addition to the almost total possession of factional colonies, House system is going to have many other new features - we have already mentioned some: for example, Houses will be able to progress. The speed of House progression will directly depend on all useful actions performed by its' members - including battles with pirates, other factions, exploring the universe, participating in events, mining resources and developing colonies. Each new level expands its capabilities and scope of influence by increasing the following parameters:

Also, Houses will be able to build Research Station we mentioned in a WIP article before, which, after some researches and certain actions, allows to get new abilities and bonuses for your House:

In addition to the research for Houses, there will be general projects available, allowing to get access to the new equipment - we'll be telling about it in details later, in one of the next Work-In-Progress articles. Further we plan to add ability to build House Headquarters and other interesting features - don't hesitate to share your impressions and thoughts!