The game restoration is now at 33%. Come in space adventurer, let us talk after two months of silence.

Sorry for the two months delay; but beyond working in the game, I was working at other game aspects (like its site) and at other things which may become an additional source of income. I actually only had time to truly work on it at the end of May until now, that gives around 1 week of progress. I was able to fully restore another game scene (and code needed by it at the base modules) which was called 'game_setup', and that together with the already restored "pre_game" amounts to 33% of the old game code restored to work at the modern game engine Panda3D. I found a few engine bugs but I could easily do workarounds for them, it is a well planned and powerful engine.

The game had 6 such scenes before the blender game engine stabbed me in my back years ago, I know the amount of progress each scene represents by making a simples calculation of 100% / 6 which gives 16.6% for each completed scene. The scenes were:

I also was working back then at the "play" scene which would be the real playable part of the game, using the scenes produced by the game editor; but its progress percentage was low before I paused the project years ago. For the 1 week I worked in the game between the end of may and beginning of june, I learned more about how to use the Panda3D game engine code and also noticed some cool features which are not necessary to the game restoration now but may be useful in the future. I am getting quite excited about Panda3D, which is funny, as I thought it was too hard years ago. It is not, just a bit more complex. In the end I noticed which large chunks of code from my old code for the gui system were too chained to the now defunct Blender Game Engine to be saved, so I deleted them and am coding what is necessary using the new Panda3D code as soon as it is needed.

All which I needed was to remember the logic of that code to make something similar in Panda3D or even upgrade the concept. I upgraded a lot of code. For example, the code for the gui system for my game is now simpler, more efficient and powerful; in coding the most important is not the code itself, but its concept, logic, its planning. Since the game now will have its content shared with the community, I will explain more about the programming of it from now on.The game is divided in modules: The "base modules" and the "scenes" modules are one of the most important. A scene module contains data so the game can build that scene, it interface with the "base modules" which are:

There are other modules, but I will talk more about them later. The phases of the game development are:

I will add a very interesting way of testing the audio, graphics and input at the "game_setup" scene, and when I say "very interesting" I mean it, I do not say it usually. I am quite proud of the concept I came up with and will code during the next weeks. After that I will already start restoring the "main_menu" scene and improving the "intro" scene. 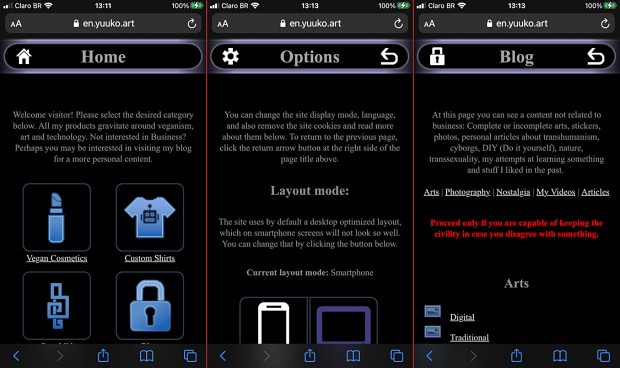 I fixed a lot of things and improved the game site as I said I would. For example:

The site now uses only https, and although it works most of the time if you are using the safari browser from apple you will get a "misdirect" error. If you refresh the page a few times it will work anyway though. It is an issue with the hosting provider I am using, "hostgator", it is not something I can solve; and since people who use the safari browser are not a majority and the problem can be workarounded by refreshing the page a few times I will do nothing about it.

I do not see the need to put more work at the site for a while, what it needs is content and that is not that important.

There was this person nicknamed "panda3dmastercoder" from the panda3d forum which talked about how he wanted to build my game himself using github as that person used windows. Although it is not a feature I am currently supporting as distributing my game contents to the community has its benefits and issues which must be carefully weighted, I decided to at least share there the content for the things I already felt secure to share at the game downloadable zip files. I shall give you more information about that later. You may think "wow, what is wrong with this gal?" about providing only linux 64-bit game files for the time being, but that was calculated. Doing so would restrict a lot who can download the game packages, thus giving me more control about what I am sharing with the community for a while; but as I said I will eventually produce packages for other platforms such as windows.

The "technical issues with my laptop" was in truth the fact which every year I test the top 6 most popular linux distributions according to distrowatch, and that consumes a lot of time because some have grave flaws, others are good for development only and others for end user usage only. In the end I remained with Fedora, but I can also say two things: PopOS! was a very polished distribution and Opensuse Leap or tumbleweed no longer was as good as it was years ago. A interesting thing: I read which it is the distribution of choice of Linus Torvalds. It was necessary, as I had to be sure there was not a better distribution to develop my game at while not being too difficult; and there was not.

My old wireless keyboard died, and if the laptop did not had a keyboard in it I would lose a lot of time until finding a new keyboard. My productivity decreased though, as the ergonomics of using a laptop keyboard while keeping it at the eye line are not so good. I want to now buy a foldable japanese wireless keyboard, and it will take a while for me to gather the money for that.

I abandoned selling my services as an artist and now am selling products with my art on them, like vegan cosmetics and shirts, as it is a more controlled thing. When you sell your art services you cannot know what the customer will ask of you, you may end up accepting something you think you can do and charge a given amount for it only to discover you had more or less work or even cannot do what you promised to do to be paid. Products on the other hand are not abstract, who want them buy them, who do not, do not buy, simple; even if you offer a few customization options all is still under your full control. I work better with certainty than the abstract.

Because of that I updated my logo to reflect the range of services I will provide, a mix of technology, art and femininity. Yes, I know, for the game project I already updated the logo 3 times, but those were mainly logos for my game; I now have a logo for everything I do and the game logo must adapt to this as well. I no longer focus only on the game, but on the game and the other products I provide. The logo have a deep meaning too, but I will only explain it after I officially secure it worldwide as my own in the future. People may steal it but without its hidden meaning it is not as effective as a logo.

There will be none from now on, as I already told you what bothered me while I developed the game at past news articles. Since now I am again all by myself developing all the parts of the game including the audio, the need to deal with humans to get what I needed for the game, a big source of stress, was eliminated and I am in "heaven" now. Do not underestimate the power of the stress to slow down your game development (and life).

A very important lesson I want to share with you is with the funny phrase "with each grain the chicken fills its belly": As long as you do not stop what you set out to do and do it a bit every day, you will eventually achieve it. The issue with the game was I paused it after the Blender Game Engine fiasco, but now I am working at it once more a bit every day and this means which eventually it will be completed. Although at first I was dispirited with having to restore 100% of the game code now it is only 67% and I am happier with that. I wanted to work around 15 days each month at it, but depending of what happens at that month I can work more or less at it.

I hope the project friends shape this project with me and make part of my personal life too, just do not be rude as I do not tolerate that.

If you liked this project you can help make it happen by sharing its indiedb, panda3d or my site game page at your social networks or mouth to mouth promotion (pick your favourite). Also, constructive criticism is welcome as always

That is it space adventurers, until the next news article!