Star Wars: Squadrons is the name of our next title in a galaxy far, far away! Welcome to your first briefing, pilots. This is where you’ll learn more details about the game on the road to launch. Whether you’re eager to join the New Republic’s vanguard or fight as a titan of war for the Galactic Empire, you’ll get that chance when the game releases worldwide on October 2nd, 2020.

Star Wars: Squadrons is the name of our next title in a galaxy far, far away! Welcome to your first briefing, pilots. This is where you’ll learn more details about the game on the road to launch. Whether you’re eager to join the New Republic’s vanguard or fight as a titan of war for the Galactic Empire, you’ll get that chance when the game releases worldwide on October 2nd, 2020.

Made in partnership between Motive Studios, Lucasfilm Ltd., and EA, Squadrons aims to provide the deepest, most authentic starfighter experience in the Star Wars galaxy to date. 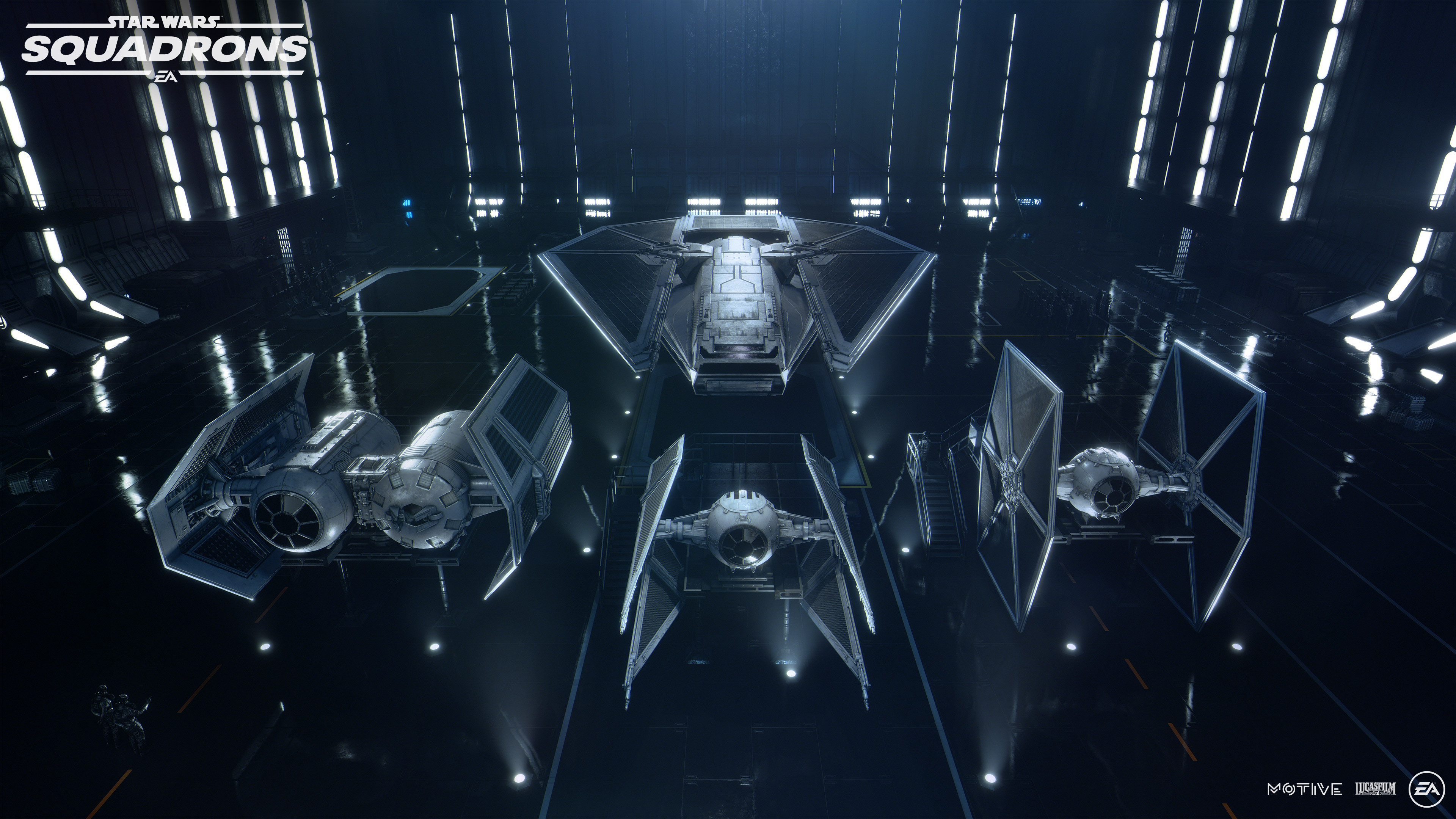 A few years ago, our team at Motive Montreal was finishing up their work on the single-player campaign for Star Wars Battlefront II. During this time we (unsurprisingly) spent a lot of time playing the game. As tried and true fans, the team is incredibly passionate about Star Wars. And that passion is how the idea for this game first came to be.

Inspired by what they worked on and the community’s positive reception to the starfighter experiences, a squadron of devs built a prototype, taking learnings from Starfighter Assault and the Rogue One: VR Mission. From this, “Project Incom” was formed, and if you know your Star Wars canon well, you’ll know that the Incom Corporation was the creator of the iconic T-65B X-wing starfighter used by the Rebellion—most notably by Luke Skywalker. 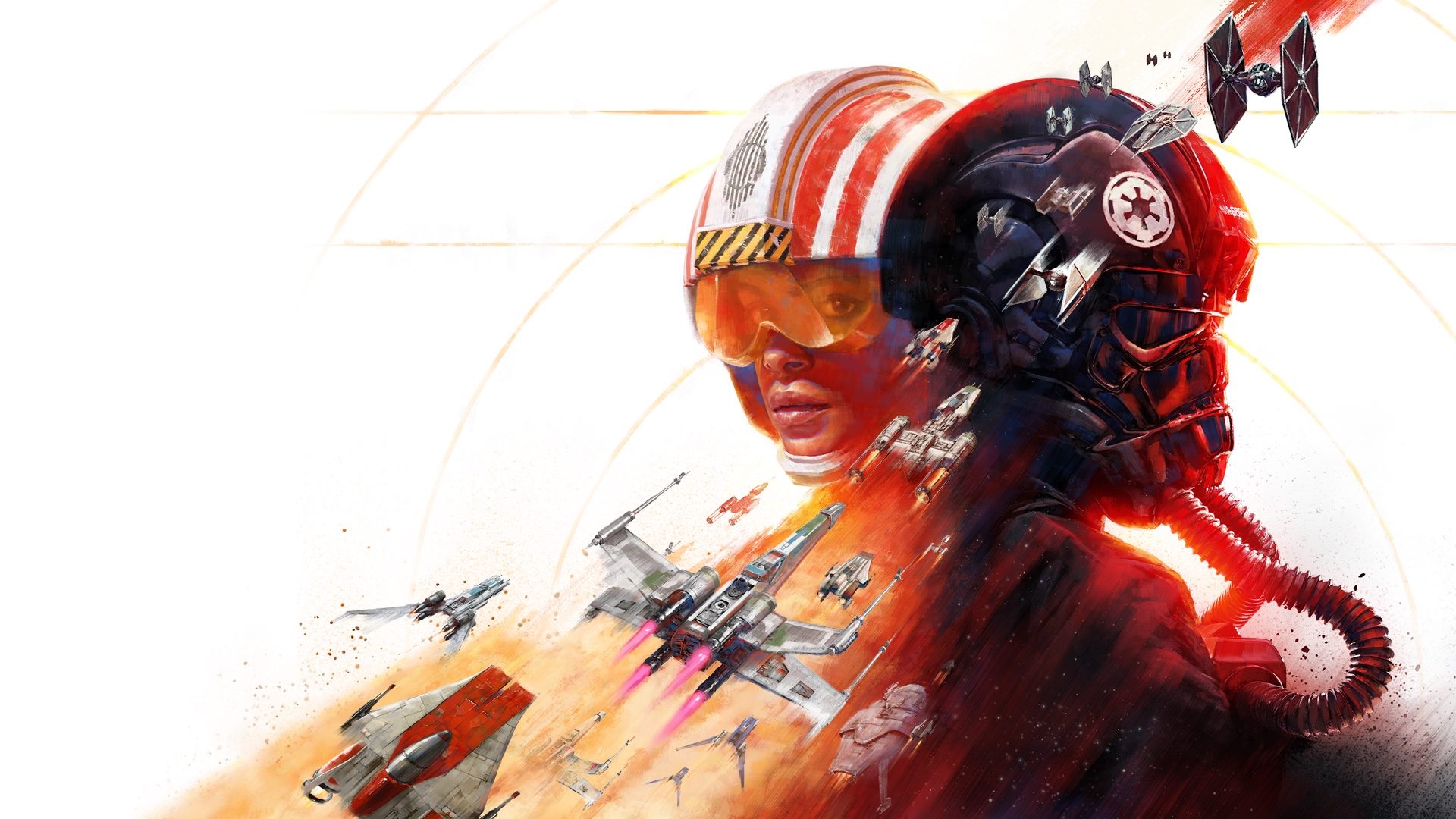 But let’s get into the game itself and start with the basics of the basics: What is Star Wars: Squadrons? It’s a first-person team-based starfighter combat game set a few years after Star Wars Episode VI: Return of the Jedi, simulating the iconic space battles from Star Wars like never before! In the wake of the destruction of the Empire’s second Death Star, the Rebel Alliance has reformed into the New Republic. Despite their climactic victory over the forest moon of Endor, though, the war is not over.

Star Wars: Squadrons gives fans a look at how the war continued throughout the galaxy after the death of the Emperor. Unlike during the years of fighting during the Galactic Civil War leading up to this point, the Empire and the New Republic are much closer in power than they ever had been, allowing for head-to-head combat across the stars. 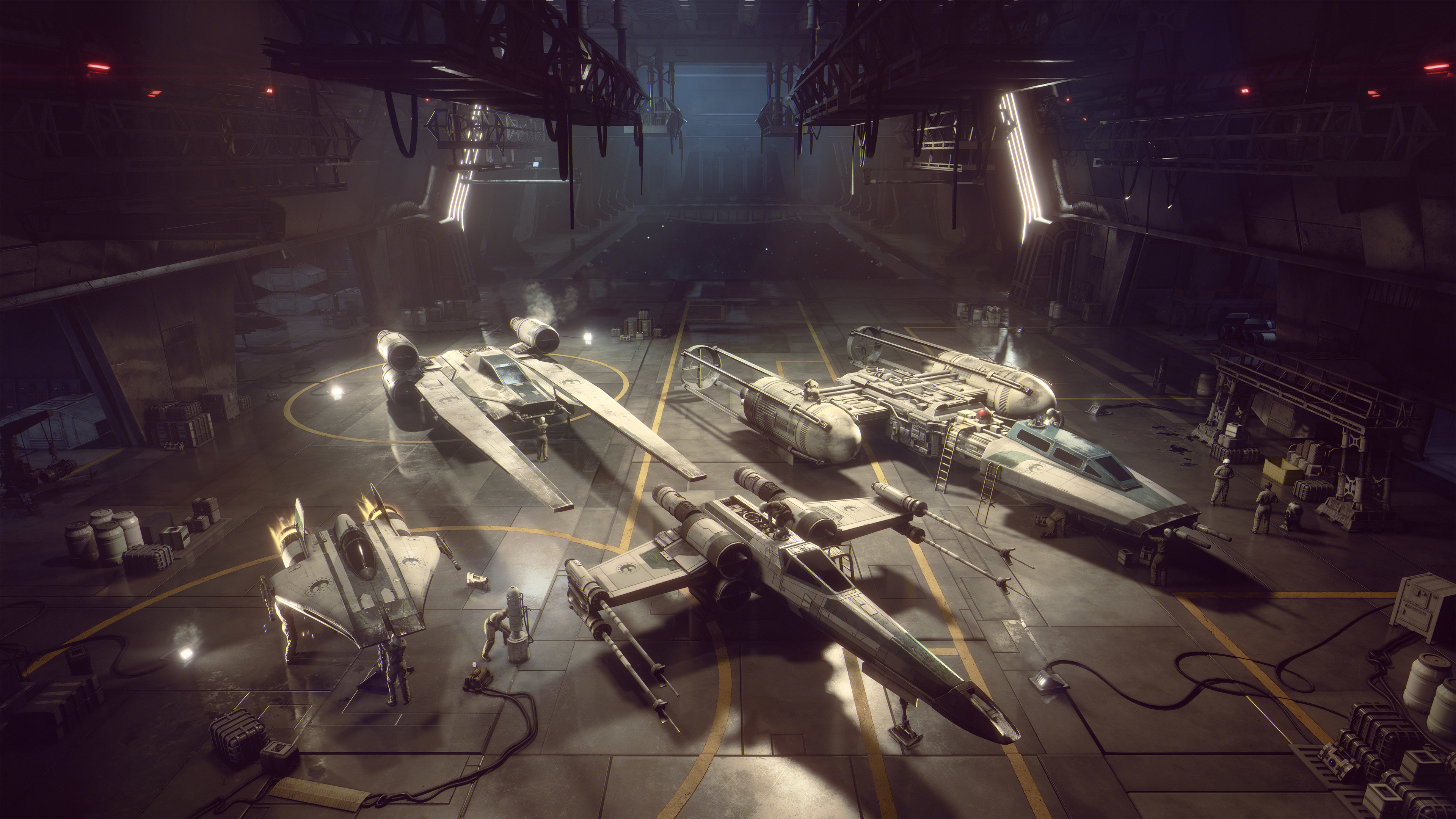 The single-player story of Star Wars: Squadrons will help you hone your skills while taking you through a tale that shows you both sides of the war. As the Empire faces infighting and desertion after Endor, the New Republic has a classified plan to stop the mighty Imperial fleet. From mission to mission, players will switch between their custom pilots on either side; a freedom fighter for the New Republic and a hardened warrior in the Imperial Navy. Both sides are fighting for what they believe in—and both will do whatever it takes to win.

In addition to a brand-new story, you’ll also earn your wings in multiplayer battles. Dogfights is a 5v5 mode where two teams earn points by destroying opponents' starfighters in a traditional team deathmatch setting. Fleet Battles is Squadrons’ signature mode. You can play with both players (5v5) and AI (or just AI by yourself) in a multi-stage, objective-based battle. Advance the frontline by dominating the enemy in an intense tug-of-war and carry out bombing runs to take out capital ships to reach your primary objective: the destruction of the enemy flagship.

Pilots will also get to customize themselves and their ships across the fleets on both sides, both aesthetically and functionally. Neither of these will be purchasable with real-world money. Everything in-game is either earned or unlocked via gameplay. 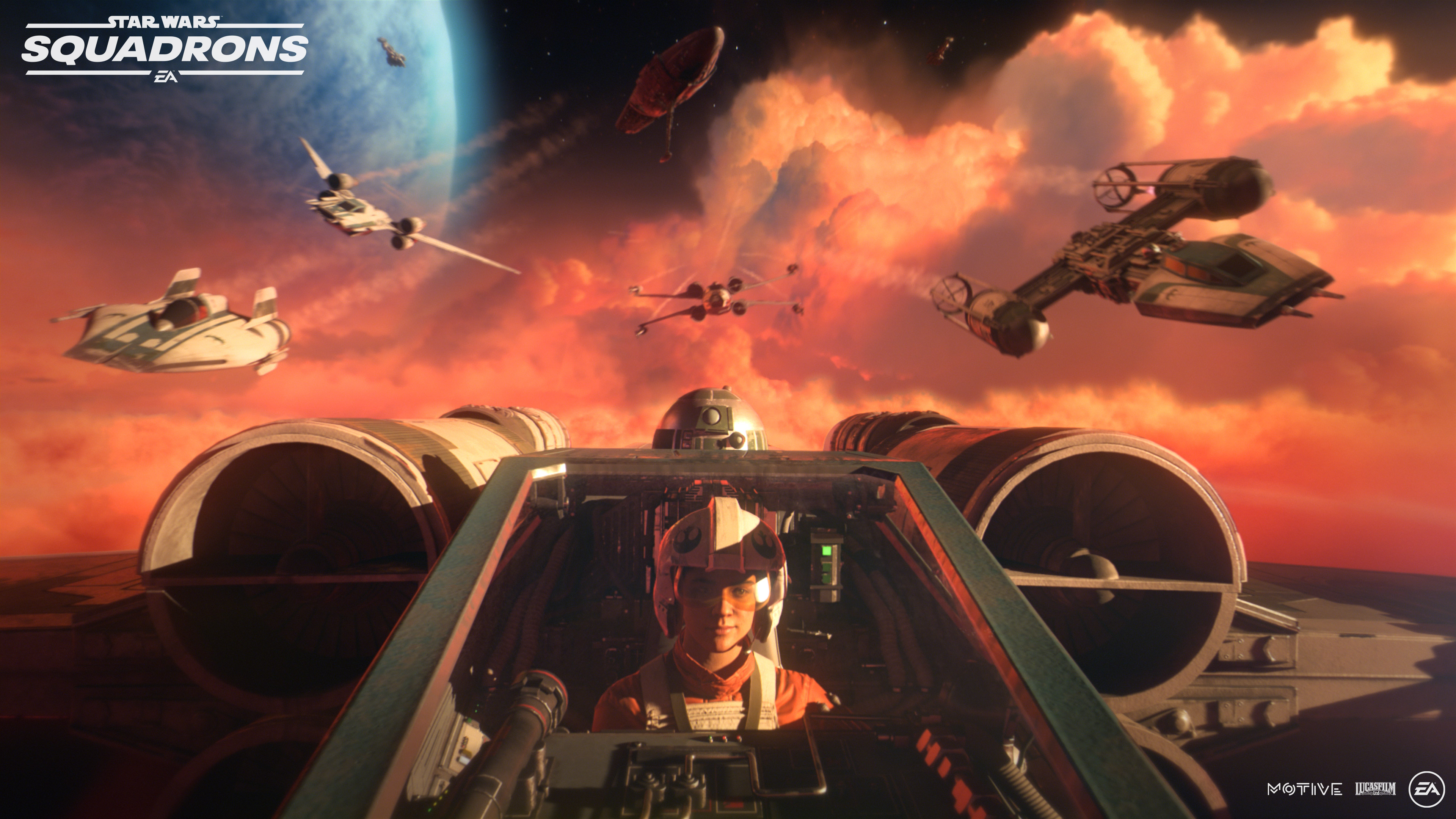 How you specialize the various functions of your favorite starfighters is even more important. While playing, you’ll be able to unlock components for your ships so that they can perform to your preferred specifications. Each starfighter can be outfitted uniquely, too, meaning an X-wing may have some different upgrade options than an A-wing or a Y-wing. Ship components range from different weaponry, auxiliary parts that aid in repairing or engaging your enemies, and much more.

Each component offers unique effects to your ships, though most have a trade-off. For example, one type of shielding system will provide more protection against blaster fire but less against missiles (or vice versa). There are many more examples beyond that, too. To add to this, you can make your squadron look how you want, as well. Your two pilots (Imperial and Republic) and eight starfighters (four per side) will all have various cosmetic options that you can earn and unlock while playing. There are plenty of different ways to stand out!

While customizing your ships in the hangar bay is important, how you use them in combat matters just as much! During combat, managing the performance outputs of your ship is crucial. At any given moment, you’ll be able to decide how you want your ship’s power to be channelled between your engine power (speed), laser power (offence), and shield strength (defence). 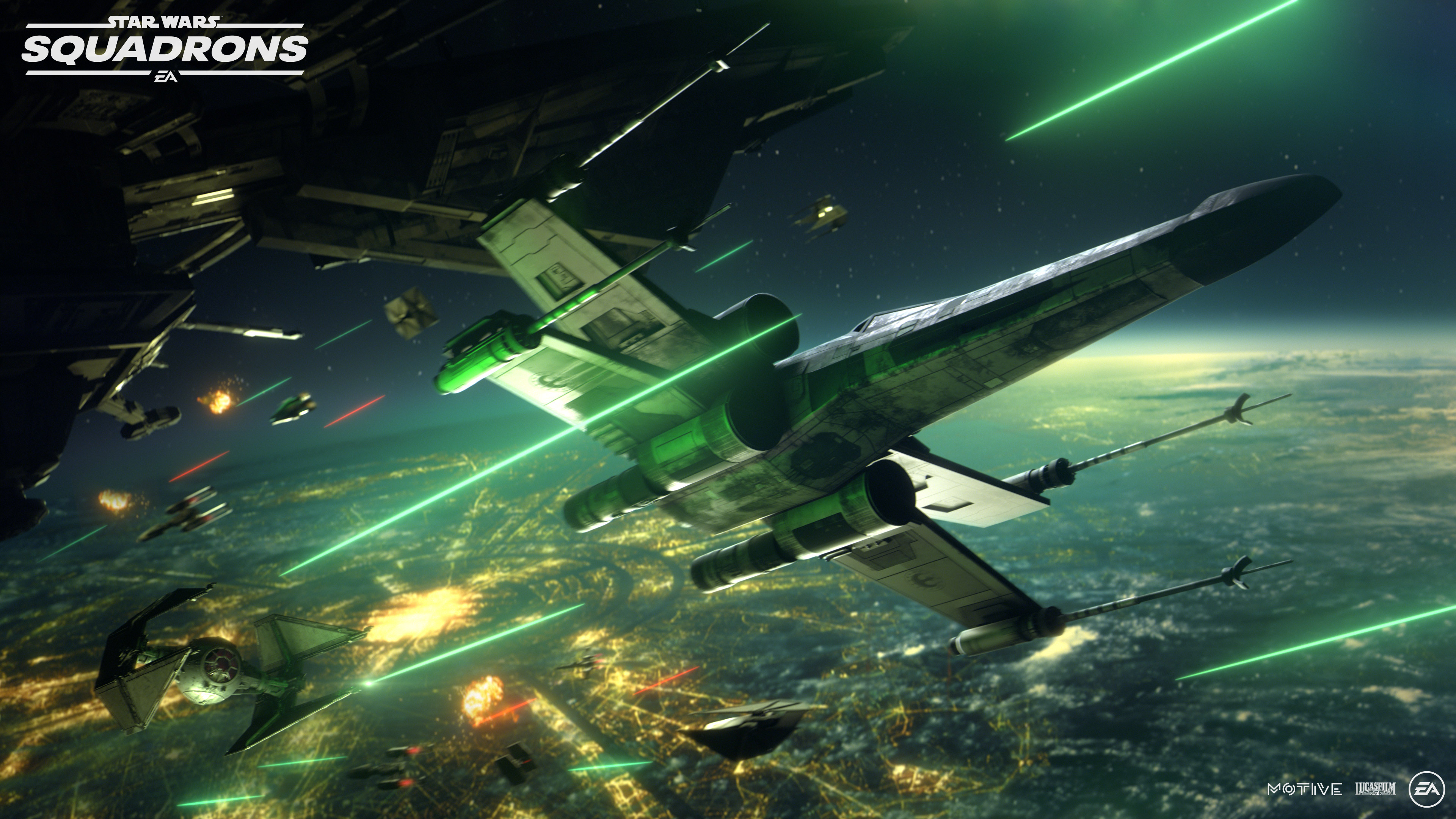 Mastering power management on the fly is what will separate you from the space dust you leave in your wake. Not all starfighters have shields, but those that do have the ability to manually focus them entirely to the front or back when needed, giving twice the protection to one part of the ship but at the cost of no shielding to the other. With this, though, they’ll typically have slightly lower max speed and offensive capabilities than their unshielded counterparts. Additionally, unshielded ships can quickly transfer additional power to their engines or blasters when they need them the most.

Learning which ships perform best to your capabilities (while also keeping squadron’s balance in mind) will help you excel in the cockpit. Because of the uniqueness between ships and factions, you’ll have the option to have matchmaking prioritize which faction you prefer to play a part of, be it for loyalty or functionality. 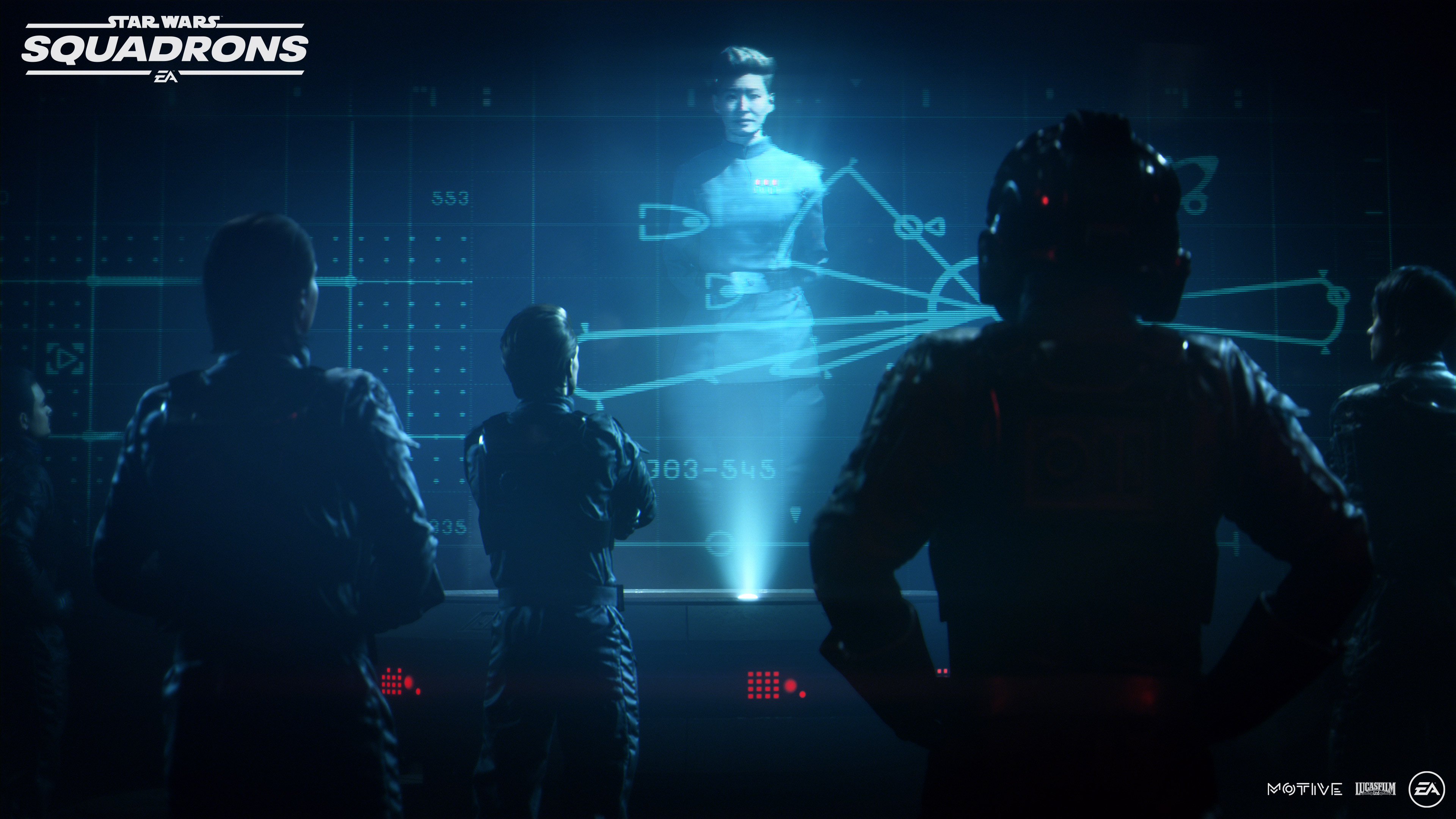 There’s even more we could get into, but we’ll save for another day. Launch isn’t far off and the team is working hard on the final polishing of the game before getting it into your hands. We’re incredibly excited for that day to come, so hang in there with us!

Keep your sights on the horizon for more news, pilots! We’d love to hear any questions you have, too! If we can, we’ll be sure to answer them in a Pilot Briefing or somewhere else online. In the future, we’re going to go deeper on some important topics, but until next time, safe travels through the hyperspace lanes! And keep your distance from any enemy ships. But don’t look like you’re trying to keep your distance. I don’t know...fly casual!

See you in the stars, pilots.