If you followed the forums, you will have noticed that the next patch features a lot of balancing changes. Today i want to introduce some of the vessel and ability changes in a small scenario...

If you followed the forums, you will have noticed that the next patch features a lot of balancing changes. Today i want to introduce some of the vessel and ability changes in a small scenario.

In the first minutes of the game we start to build up our mining and Field Yards, to produce a bunch of those B'rels. On our first patrols a Federation battlegroup shows up! Fortunately, our destroyers are equipped with Tactical Weapon-Arrays, toasting long range vessels with ease. Seconds later we may watch a nice firework as those hated Canaverals go to Sto'Vo'Kor. 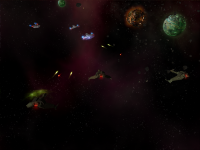 But those humans aren't sleeping. Just a few minutes later, as we started to acquire new moons for the empire, a Federation Warp-In shows up, devestating our few defenses. We use our B'rels against their long-range support again, while we got some K'Vorts and Vor'chas ready. The Vor'cha is armored with ablative plates, greatly reducing the damage from any short range vessels that might strike at us. Always watch out for those bloody Defiants! 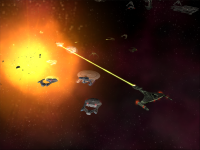 And here they come. The Defiant is a challenging opponent for our warriors. Like our Vor'cha type battleships it's heavily armored and the pulse phasers take out our B'rels. That allows their long-range support like Excelsior-II and Saber Class vessels to open fire! We have to do something about that! Supporting the House of Duras, we got some Charghs. They are more effective if used against short-range targets... Indeed! Our combined Vor'cha and Chargh fleets take out those Defiants, to open the field for our Bird of Prey squadrons. Once again victory is ours. 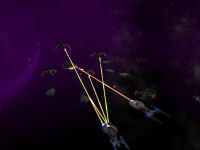 Thats just a rough example on how the new gameplay changes and vessel characteristics might come into play. If that sounds a bit too much for you, relax. Its not like B'rels are useless against other targets, they still perform as normal. The new rebalancing underlines vessel outlines. Its ment to be an interessting asset for multiplayer games, but if you just like to shot at the enemy with all you got, thats still a valid option.

Looking forward for the next version.
This new subsystem feature sounds good. It works in Empire at war it does work in Freespace I'm sure it will work in Armada as well.

Really have enjoyed the mod so far. This update sounds great!