So now, here is the big update you have all been waiting for - 3.0.6 Veteran Ranks! Now for the first time you can let ships that have gained an officer rank in combat raise their status to 'vetaran' which unlocks special weapons or abilities that are unique for each race. Once a Klingon Negh'var was promoted to veteran rank, it will get the heavy disruptor weapons which once crushed Deep Space Nine, just to give one example.

The Borg build system has been simplified. Configuring a Borg Cube has been quite a pain with high number of different modules available, especially for players new to Fleet Operations. You had to remember each module you had previously selected and if you accidently selected a wrong module, you weren't able to go back and reconfigure the cube without loosing resources. That was not because we intended this feature to be this way (awkward), but due to various limitations within Armada 2. Quite a lot of coding was required to let Fleet Operations overcome these limitations, so now this feature is a lot more as we intended it in the first place. The redesigned build screen for the borg now shows all available modules at once. You can switch between them as often as you'd like and see what the resulting vessel will cost and which capabilities it will have.

The federation warp-in feature now additionally has the Ambassador class available and finally the ugly old Klingon Imperial Yard model has been replaced with a brand new version. Speaking of shipyards: As an extra, you can add an upgrade to them that allows an allied player to use your shipyard for repairs, which may be a nice addition to improve the teamplay character in multiplayer games. I'd recommend you take a look into the changelog for all the changes and additions we made. Overall since 3.0.0 a lot files have been changed, replaced or even deleted, so to avoid possible trouble or incompatibilities, 3.0.6 is not a patch actually, but a full version - a 3.0.6 prepatched 3.0 installation if you like. We won't make an incremental patch available this time.

Thanks again for all your input in the forums and through emails.

3.0.6 is a full install. A previous installation of Fleet Operations or Armada II is NOT required. 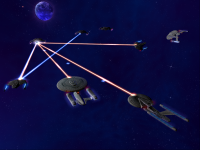 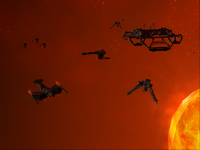 Just amazing, especially if you consider that they have done all of this stuff with a almost 8 years old game!

This looks pretty Kool, & I should imagine that the all STAR TREK mods on this site are buzzing at the moment in the light of the recently released, & Billiant STAR TREK movie.

The amount of time and effort that's been put int this mod is really amazing. Spectacular work!