Win one of the three Early-Access Closed Beta keys in this simple competition! 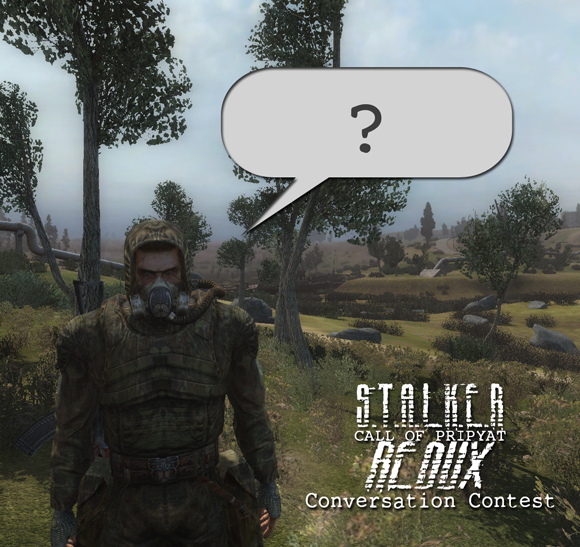 Up for grabs are THREE early-access beta keys for v1.0 (and more) and it couldn't be easier to win!

How can I get my grubby mitts on these fabulous prizes, I hear you cry?

One of S.T.A.L.K.E.R.s greatest assets is the interesting and engrossing story it tells of the Zone and its wonders and horrors. Tales of heroes, villains, anomalies and mutants make their way across the Zone, passed from the tongue of one S.T.A.L.K.E.R. to another. Your task is to create one of these tales, a story that will grip the player and make them think more deeply about the Zone they inhabit.

And so, your mission is to come up with an interesting story, the likes of which you're told by fellow S.T.A.L.K.E.R.s when you ask them 'What's new in the Zone?'
Your story could be about a location in the Zone, a character, rumour/legend, almost anything you want - let your imagination run rampage.
If you have a preference, please specify which faction will tell your story.

So what's up for grabs? Well, if you're one of the three people whose entries are judged the best of the bunch, your story will be guaranteed to feature in Redux, you'll receive a key for use in the future Redux v1.0 Closed Beta, as well as the privilege of having your name in the game (if you want it)!

So, get those creative juices flowing! Send entries to CoPRedux@googlemail.com - you have until midnight, June 10th!

Contest Rules / Terms and Conditions:
1: Your entry must be received no later than Midnight, June 10th (I.E the night of the 9th).
2: Your entry must be up to or exactly 250 words long.
3: Your entry must not contain racist, hateful, homophobic content or any comments of that nature. Swearing is fine.
4: You may enter as many times as you like.
5: By submitting an entry you consent to your work, ideas or content being used in CoP: Redux.
6: If you win, your entry may be altered slightly (grammar, spelling etc) before inclusion in Redux.
7: The top three entries as judged by me will receive beta keys for the v1.0 Closed Beta of Redux, and the creator will have the opportunity to submit a name of their choice for use for a character in Redux.

Good Luck, and have fun!

Can you enter more than once? I have several ideas :)

Can more than just the winners get their stories included? For me it would be more awesome to get something I wrote into the mod than to get the beta key (Since my gaming rig is busted)...

Yes, if your story is good enough you may very well get into the mod anyway :)

Nice, should I send it some other way since I dont want too really win anyways?

Just send it the same way but mention that you don't want to win :)

Just need to write something down then :D

How formal/unformal (Dont know what it is called) should it be. Can it be limited to a single person or does it have to be general?

Whatever you like really, but it needs to be tellable by anyone in the faction you choose, e.g any random member of Freedom might say it.
Mail an entry and I'll tell you if it's right or not :)

I need to fix it a bit and write a second entry related to it just for fun (Pretty much a rumour about a specific man). I will probably need to scrap it now that you told me it has to be told by any faction member. Meh ill see tomorrow, was busy trying to write some horror/thriller thingy tonight (Maybe I will actually make something readable in the future haha).... Gah nevermind that, I must sleep.

Go ahead and send whatever you have, if you want to - I can have a go at molding a little to fit what I'm looking for, if you're o.k with that.

Of course, but im still fixing it. Ill see when I can send it in :)

I sent the text I had started on but as you probably wont use it you can just read it or whatever you feel like.

I'm debating on entering, but a 3-person closed beta, for a mod? Is that a joke?

It's not a three-person closed beta... This competition has three closed beta keys up for grabs.