Post news RSS A Look at the Rivendell Spellbook...

In this article we'll be taking an indepth look at the Rivendell spellbook!

Posted by MathijsRevora on Jun 5th, 2019

In this article we'll be taking an indepth look at the Rivendell spellbook! 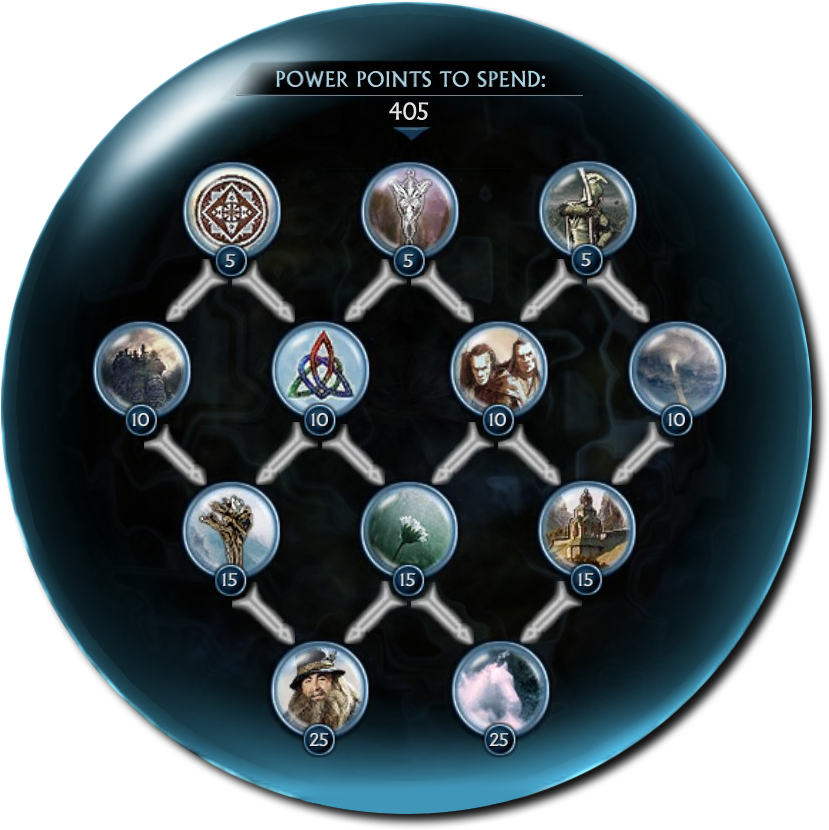 Wisdom of the Eldar
Elrond Halfelven was wise and learned and, like Galadriel, in possession of the Gift of Foresight, allowing him to occasionally glimpse some shadowy part of events not yet unfolded, either through some innate magic or the ability to apply his vast knowledge to foretell what may come to pass. In addition, Elrond's allies were manifold, and his scouts and messengers traveled often between Rivendell and other settlements of all races, granting their lord a clear view of the goings-on in the wider world.

Wisdom of the Eldar allows the player to see a shrouded area of the map.

Tolo Dan Nan Galad
Elrond's skill in healing was unparalleled. Not only did he possess intimate knowledge of the physical nature of sickness and injury, he was able to detect and treat magical maladies, as evidenced by his healing of Frodo Baggins, stabbed by a Morgul blade and under the spell of its corruption. Elrond fostered a young Aragorn and taught him much of healing, helping to fulfill an old Gondorian prophecy - that their King, once returned, would be recognized by his skill as a healer.

Tangado Haid!
Elrond was not only amongst the wisest of the Eldar still in Middle-earth, he also possessed martial prowess rivaled by few, as well as experience as a battle commander and herald for Ereinion Gil-galad, the last High King of the Noldor, campaigning with him throughout the War of the Last Alliance. In later years, Elrond fought at Dol Guldur, commanding a force of warriors alongside his fellow members of the White Council.

'Tangado haid', meaning 'hold your positions' is an elven battle command, granting a temporary buff to units within its radius. 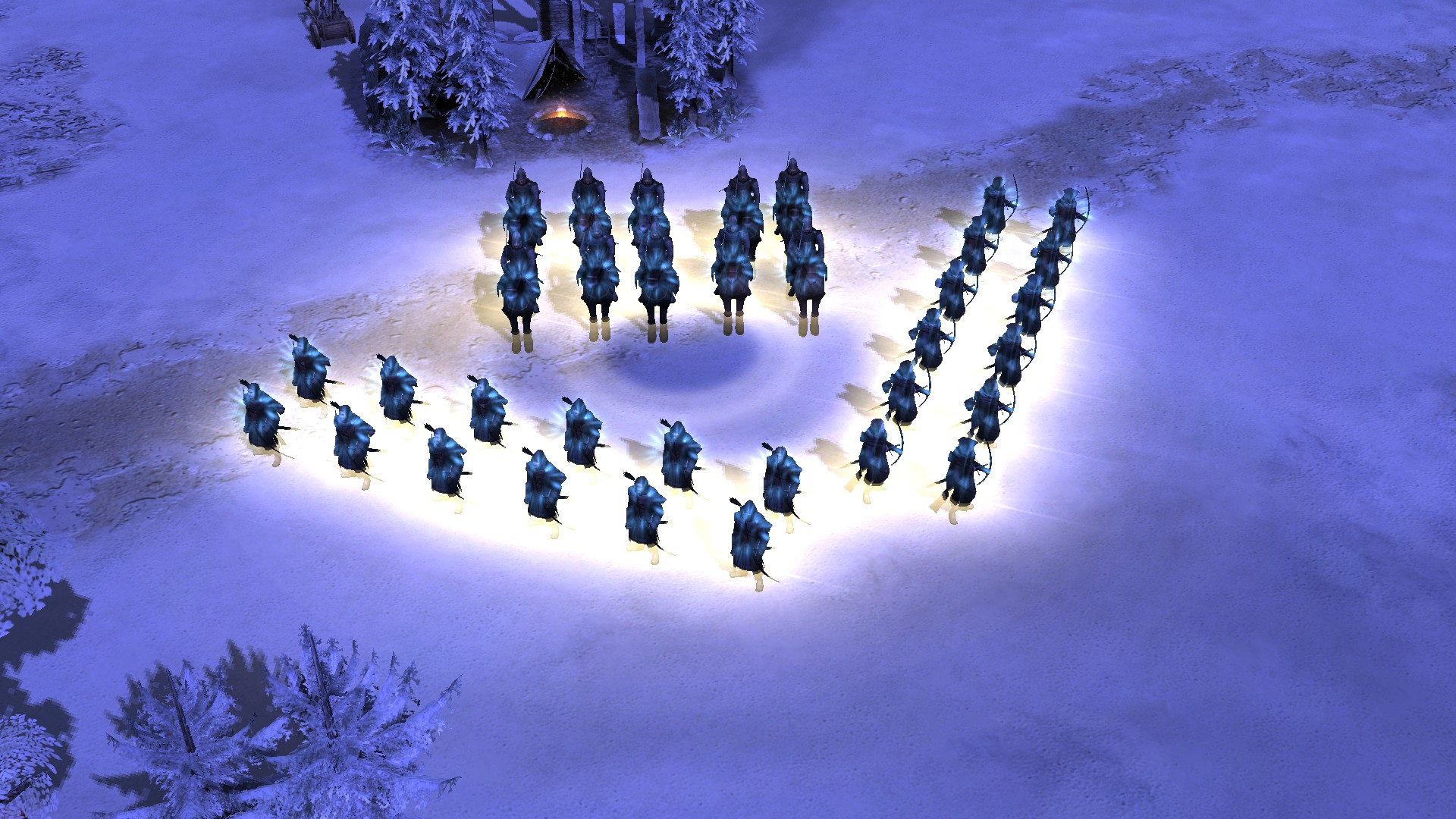 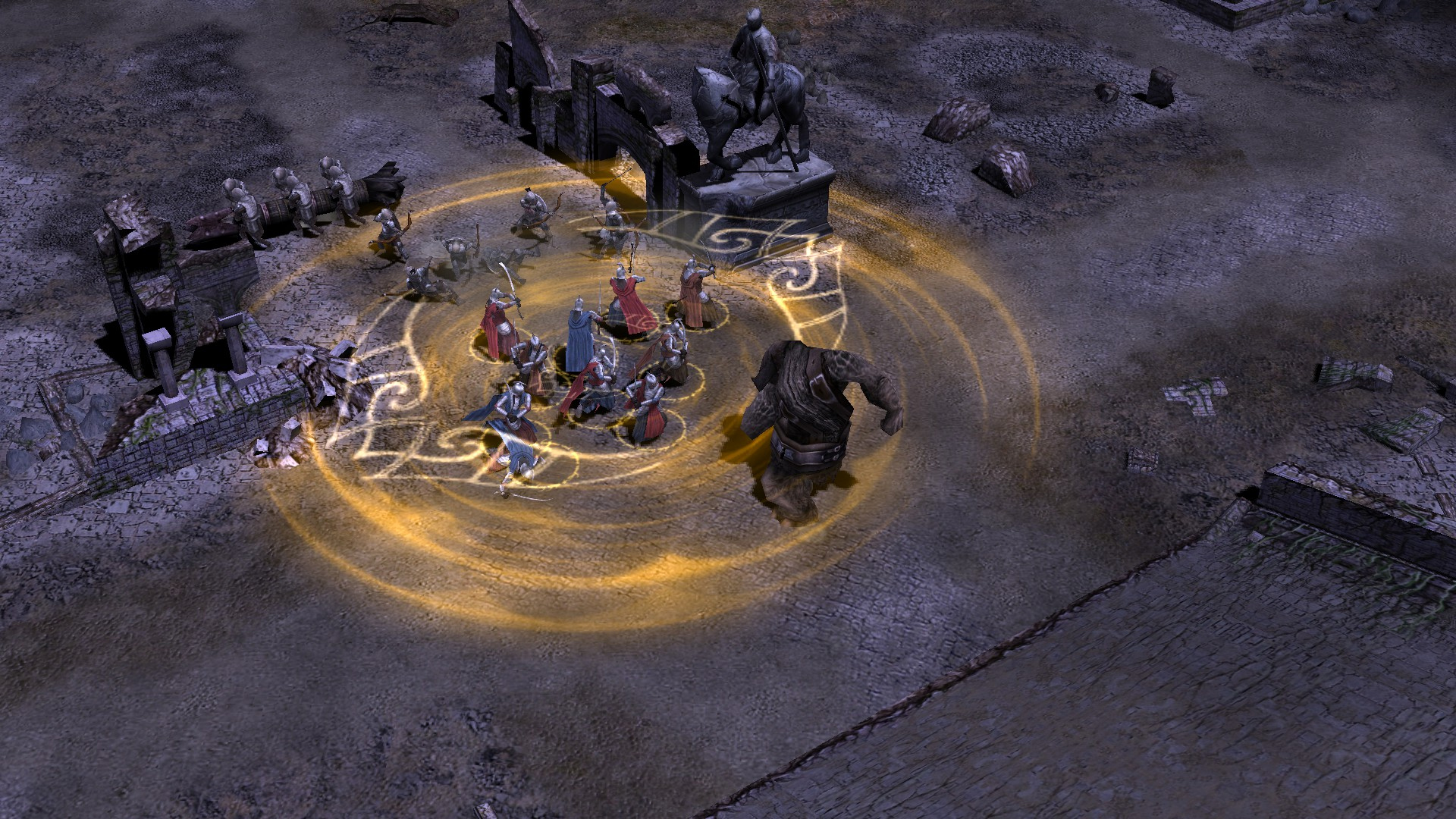 Remnant of the Old Kingdom
The lands of Eriador were long ago ruled by the Kings of Arnor, the North Kingdom, founded by Elendil when he sailed from doomed Númenor and landed in Middle-earth. It was destroyed long ago, but its descendants still roam the wilds like unquiet ghosts of the past. The Dúnedain Rangers, ranging far and wide to protect the inhabitants of Eriador from the evildoers lurking at their doorstep often visited hallowed ruins of their past, leaving instructions and supplies for their kin to find.

Remnant of the Old Kingdom summons the wooded ruin of an Arnorian outpost, granting bonuses to units standing near it.

Many Meetings
Through fate and careful planning, representatives of all races belonging to the Free Peoples arrived at Rivendell, where Elrond had called a great council. Men from Dale and Laketown, Dwarves of Erebor, and representatives of the Woodland Realm and Gondor, as well as a group of unsuspecting hobbits, all convened to discuss and deliberate, and to come up with some means to rid Middle-earth of the evil of Sauron and the One Ring.

Many Meetings summons three randomized battalions of warriors from all across Middle-earth.

The Sons of Elrond
Elrond's twin sons were skilled warriors that inherited no small amount of their father's wisdom. Elladan and Elrohir spent a lot of time with the Dúnedain, aiding them in their expeditions to root out orcish malice in particular, for their mother, Celebrian, had been taken and tortured by orcs in their youth, igniting a lifelong passionate hatred in her sons for all things orcish.

The Sons of Elrond allows Elladan and Elrohir to be recruited from the Dúnedain Gathering.

Breath of Manwë
Manwë Súlimo was the King of the Valar, husband of Varda Elentári, brother of the Dark Lord Melkor (Morgoth), and King of Arda. The winds, airs and birds were his servants. He was the greatest of the Ainur in authority, but not in power. The Lord of the Breath of Arda, he was appointed as its Ruler, hence his most common title, the Elder King. All Elvendom worshipped Manwë, and it was believed that he would occasionally bless his subjects through the gift of swift sails or a punishing gust to halt the Enemy.

Breath of Manwë summons a stationary tornado that damages and knocks back enemy units, as well as deals powerful siege damage. 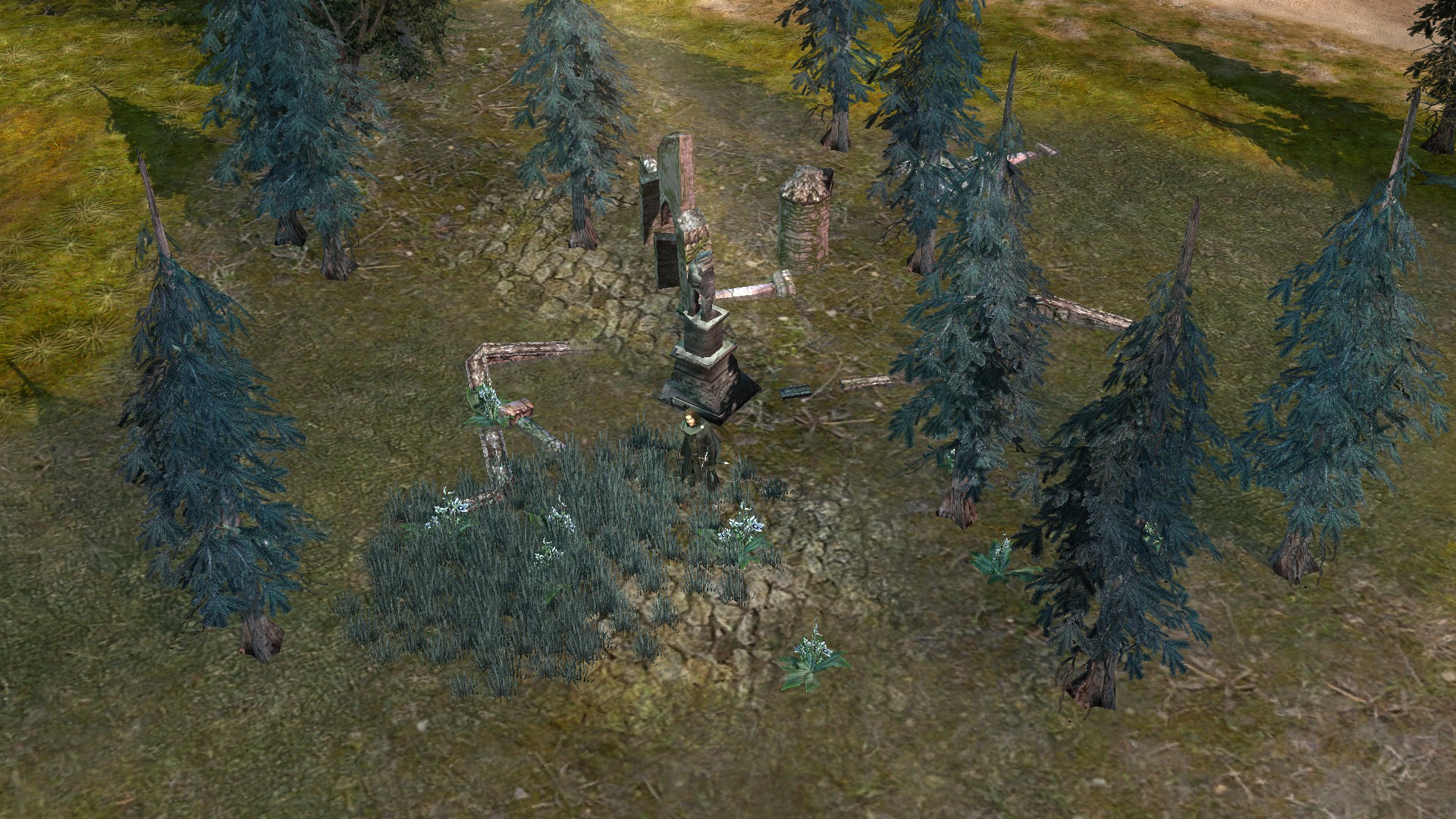 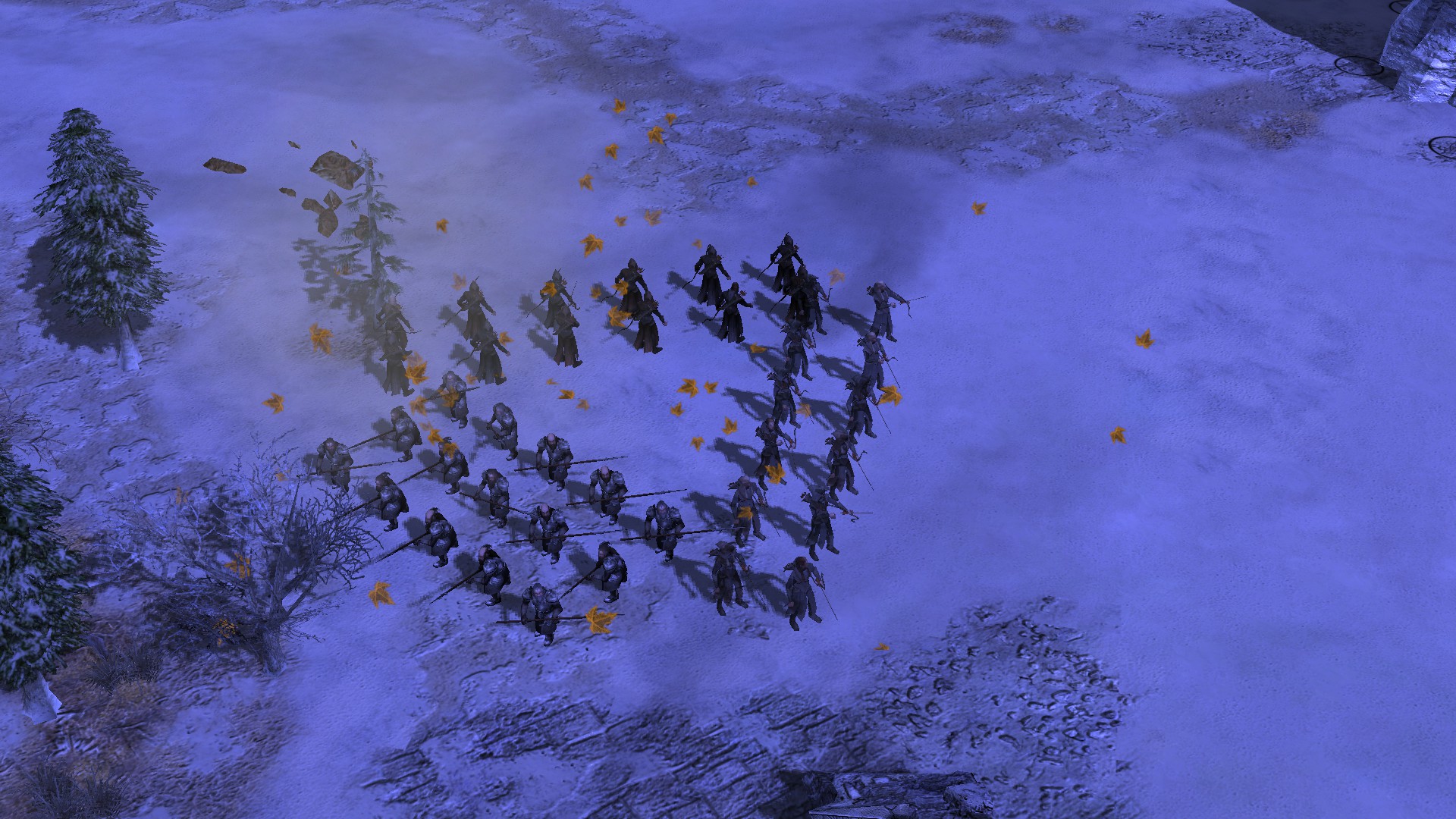 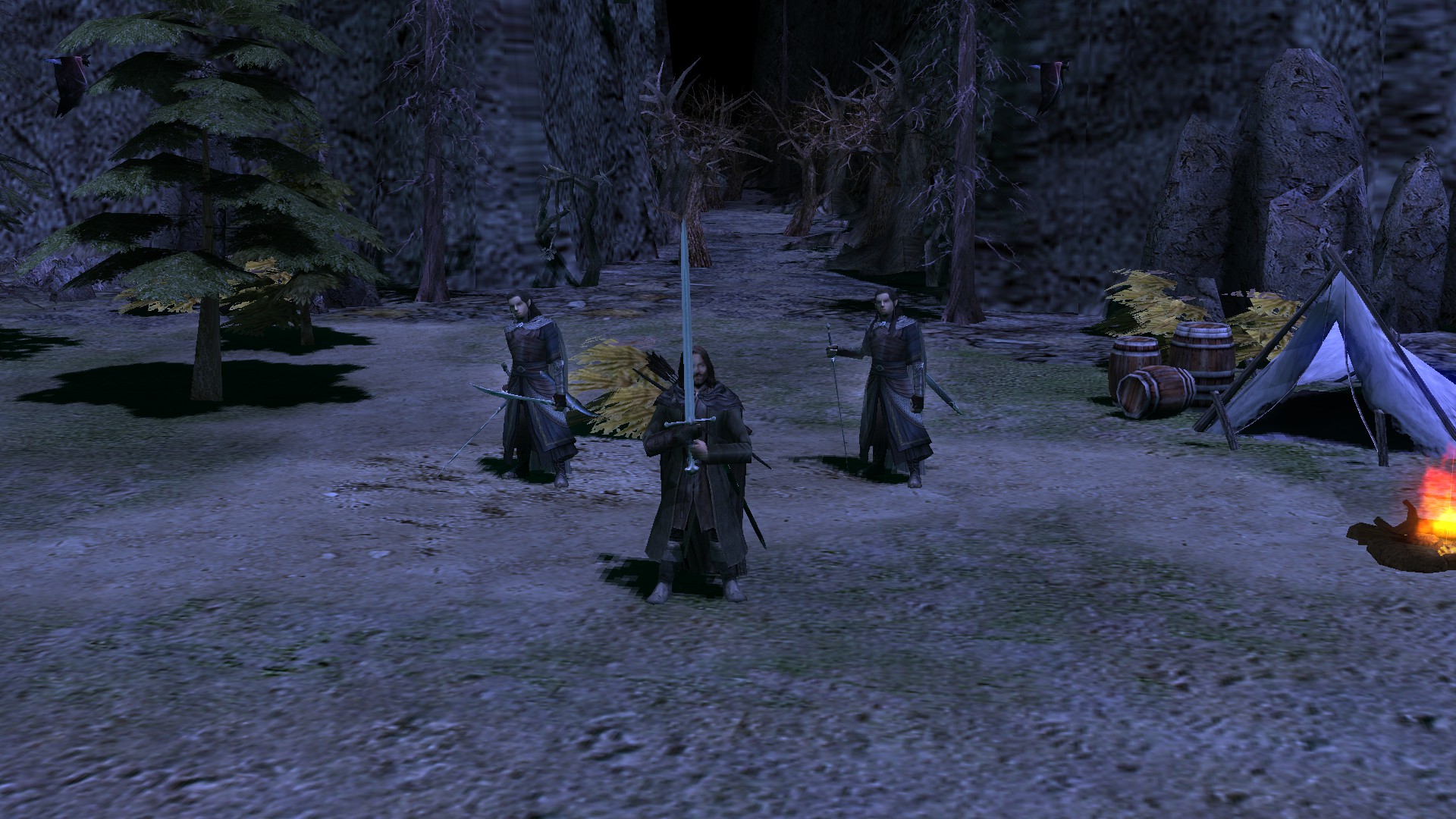 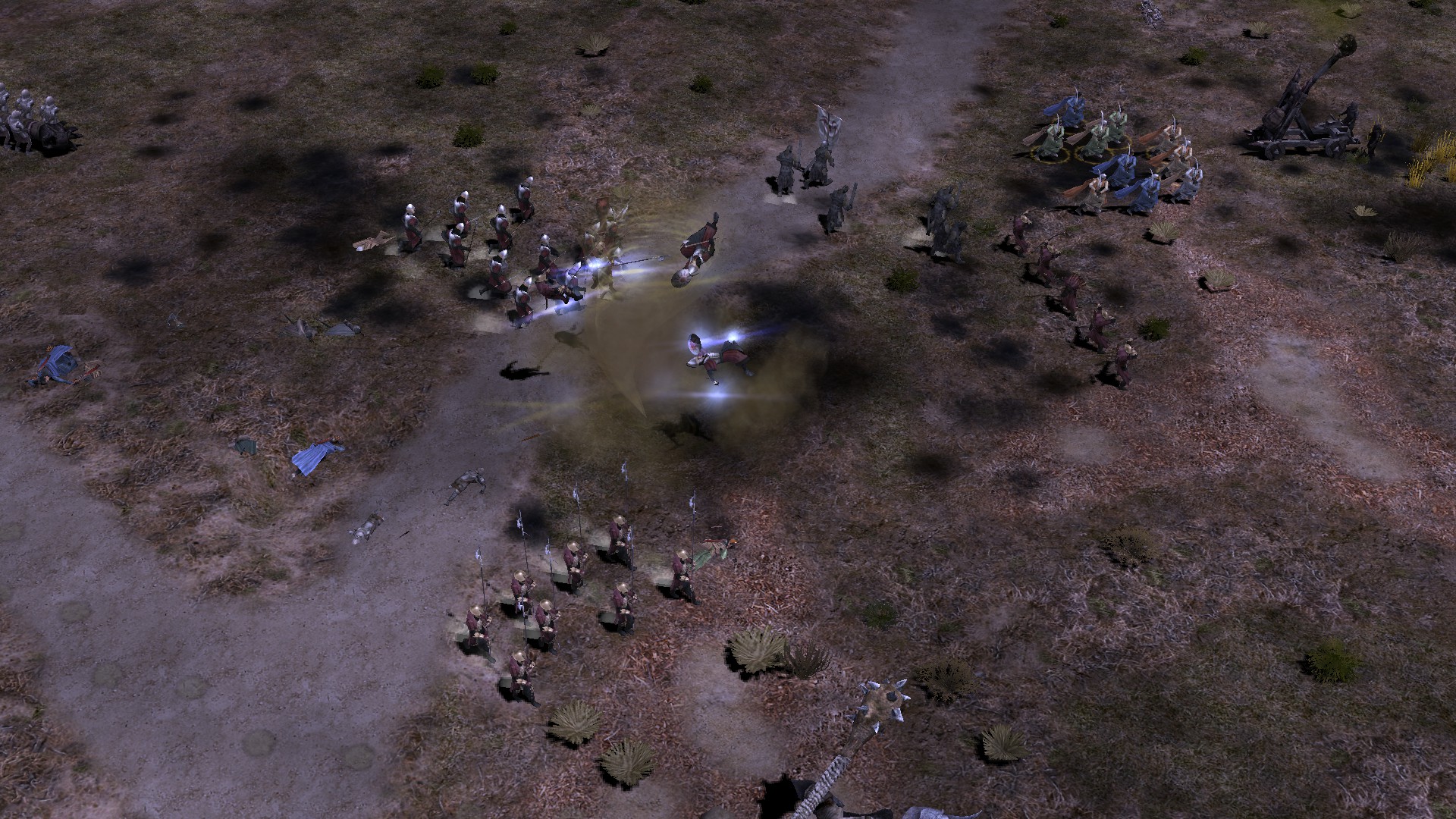 The Grey Pilgrim
Gandalf, or Mithrandir to the Elves, was a highly respected guest in all Elven holds. And though he may have been treated with a degree of suspicion in the Shire, Gandalf's favorite subject of study were hobbits - their customs, habitat, history, and - notably - their excellent pipeweed. He maintained friendly relations with the Old Took, providing marvelous fireworks for his annual birthday party, and would later befriend Bilbo Baggins, nudging him out of his cosy hobbit home and out into the wide world. When he discovered the secret of Bilbo's ring, he took it upon himself to aid and protect Bilbo's nephew, Frodo Baggins.

The Grey Pilgrim temporarily summons Gandalf the Grey to the battlefield.

Blessing of Ulmo
"Ulmo loves both Elves and Men, and never abandoned them, not even when they lay under the wrath of the Valar."― The Silmarillion, "Valaquenta"

Ulmo was a Vala, also known as King of the Sea, Lord of Waters, and Dweller of the Deep. One of the mightiest of the Ainur, he was second in majesty of the Aratar, after Manwëand Varda. At several points Ulmo was notable for setting himself apart from his brethren, and also for being the friendliest to the Children of Eru. It is not beyond reason to believe then that Ulmo might use his great power to send forth rainclouds to cover the land of elves and men in blessed rains, to aid in a bountiful harvest or the cleansing of illness.

Blessing of Ulmo casts down a soft rain, increasing Orchard production and granting immunity to fear and terror to all units, as well as slowly healing them.

Hall of Fire
The Hall of Fire was a hallowed room in Rivendell, where the Elves would gather to tell tales and recite poetry in remembrance of the past. Songs of joy and sadness and heroism all were recounted in this magical place. Mortals present there might be overwhelmed by the beauty and vividity of the Elven skill of storytelling, to feel as if they were there, in person, witnessing the great deeds of Fingolfin and Gil-galad, or the tragedy of Túrin Turambar.

Hall of Fire summons the Hall of Fire, which may temporarily call forth Vivid Retellings that deal strong damage and incite terror into the hearts of the Enemy. 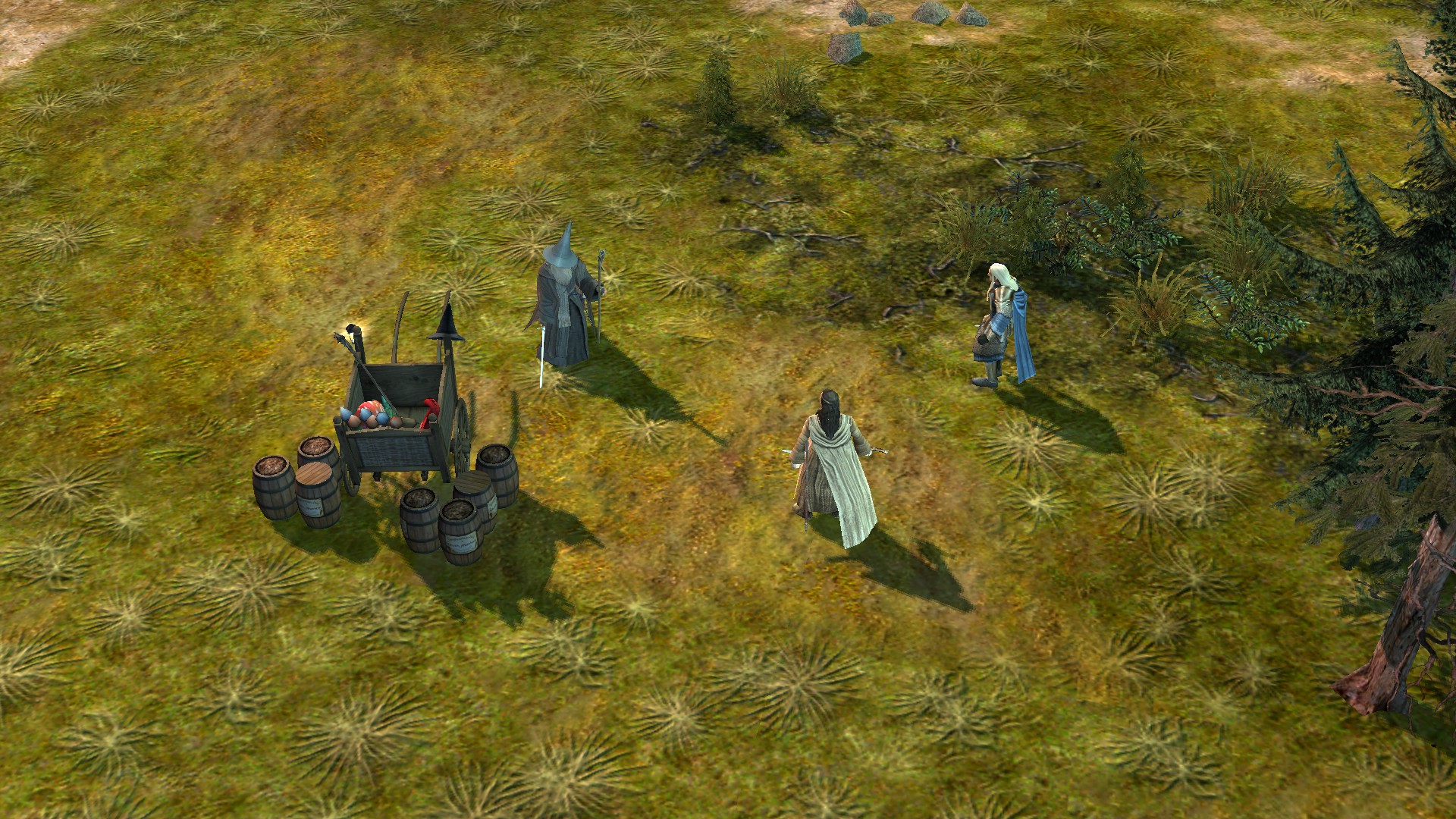 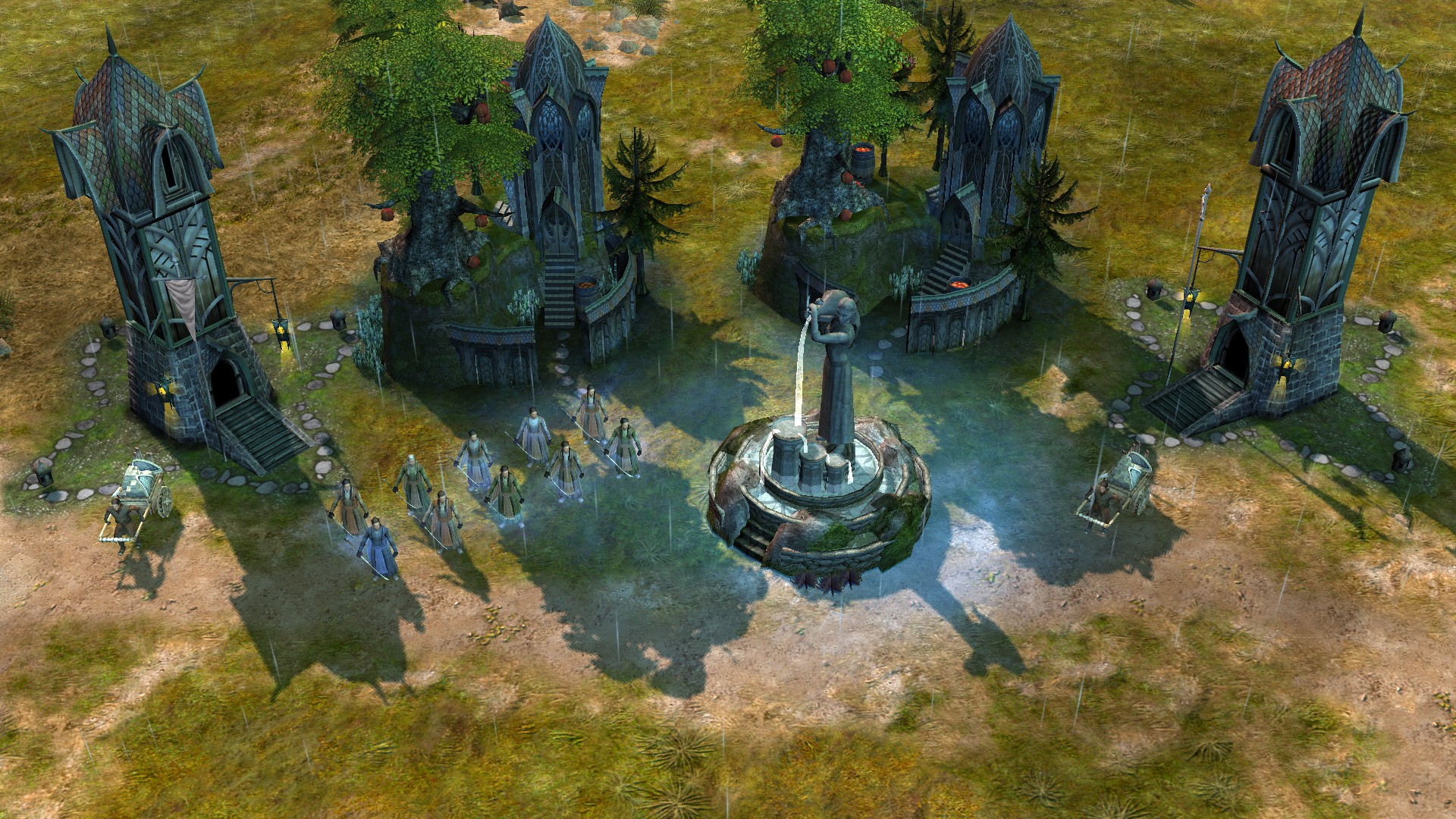 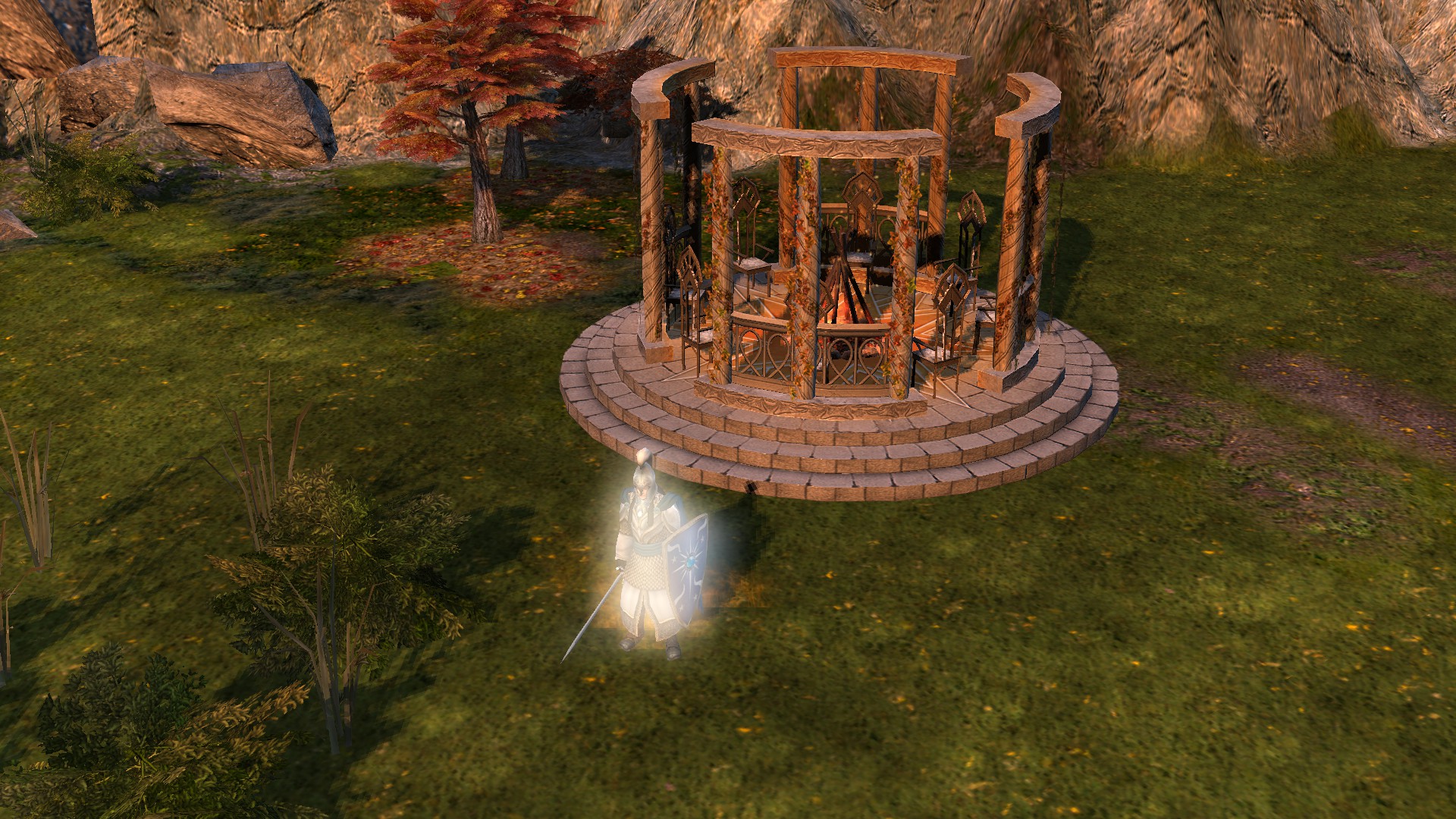 Come Merry Dol!
Tom Bombadil. Iarwain Ben-adar. Orald. Eldest. Bombadil was an enigmatic, primordial creature, as old as the world itself - if not older. He was there before Morgoth came to Middle-earth, before the Valar followed, before the growing of the Two Trees, and before the first rising of the Sun. Merry and carefree, he appears to possess great power and utter mastery over the Old Forest, where he resides during the time of the War of the Ring, and likely long before. The concept of evil is meaningless to him, and those that befriend him need only sing his joyous song to summon him forth...

Wrath of the Bruinen
When Frodo Baggins crossed the Fords of the Bruinen, the Lord of Morgul and his retinue of shadowy wraiths was hot on his tail. It was fortunate then that Glorfindel caught up to them and managed to drive them into the river, where the combined magic of Elrond and Gandalf managed to wash them away in a torrent of horse-shaped water.

Wrath of the Bruinen summons a flood of water to wash over and heavily damage the enemy. 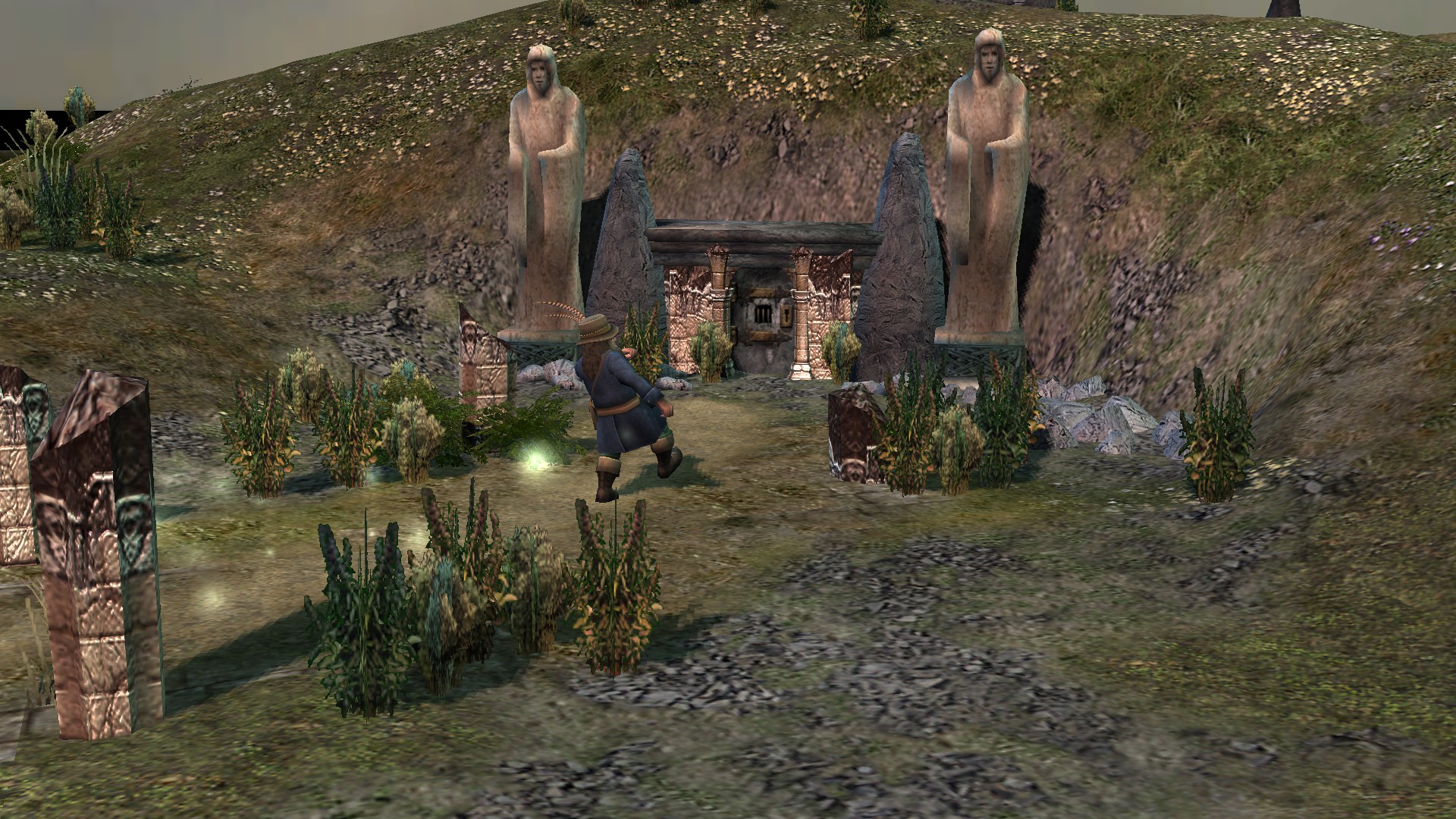 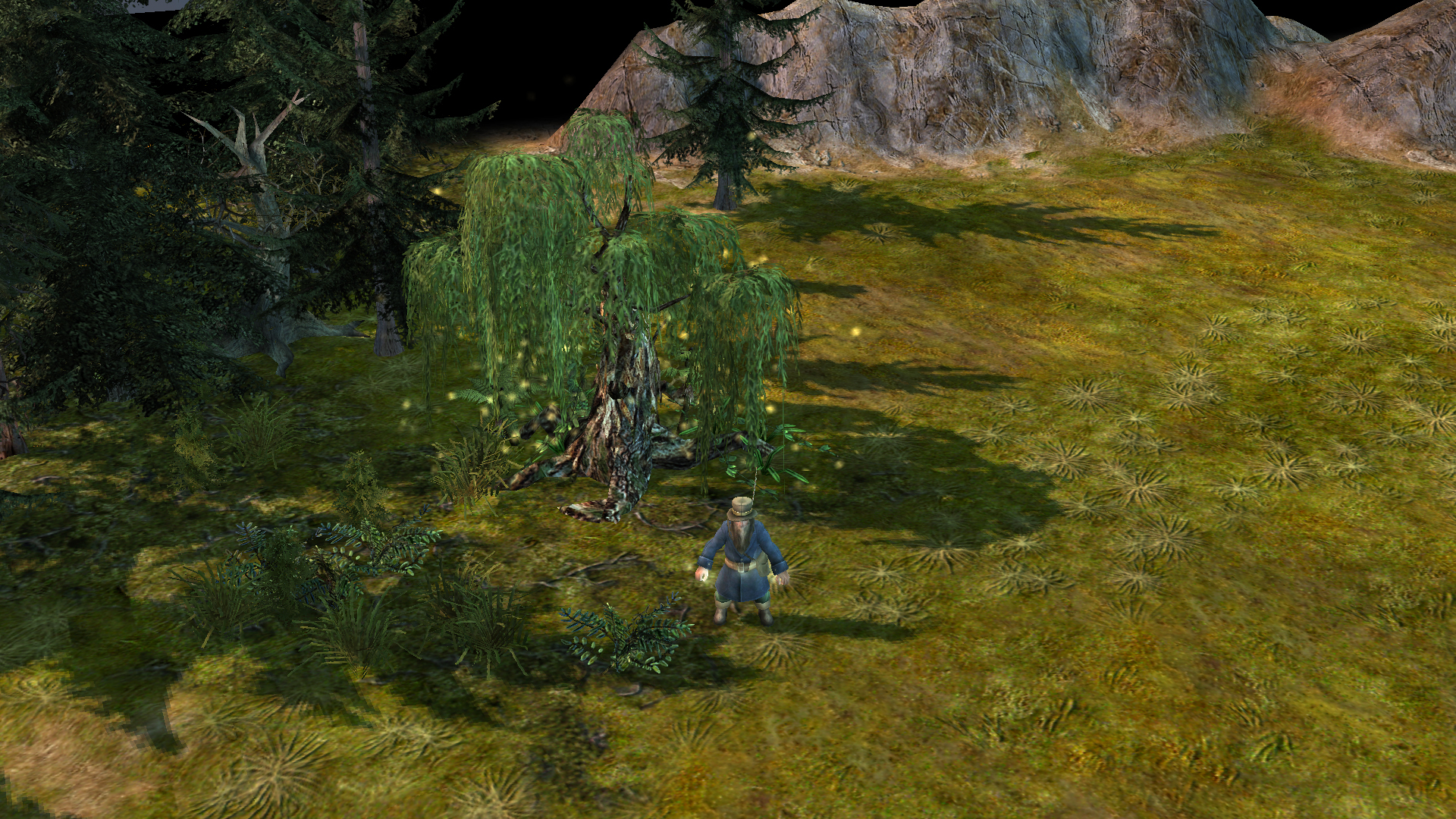 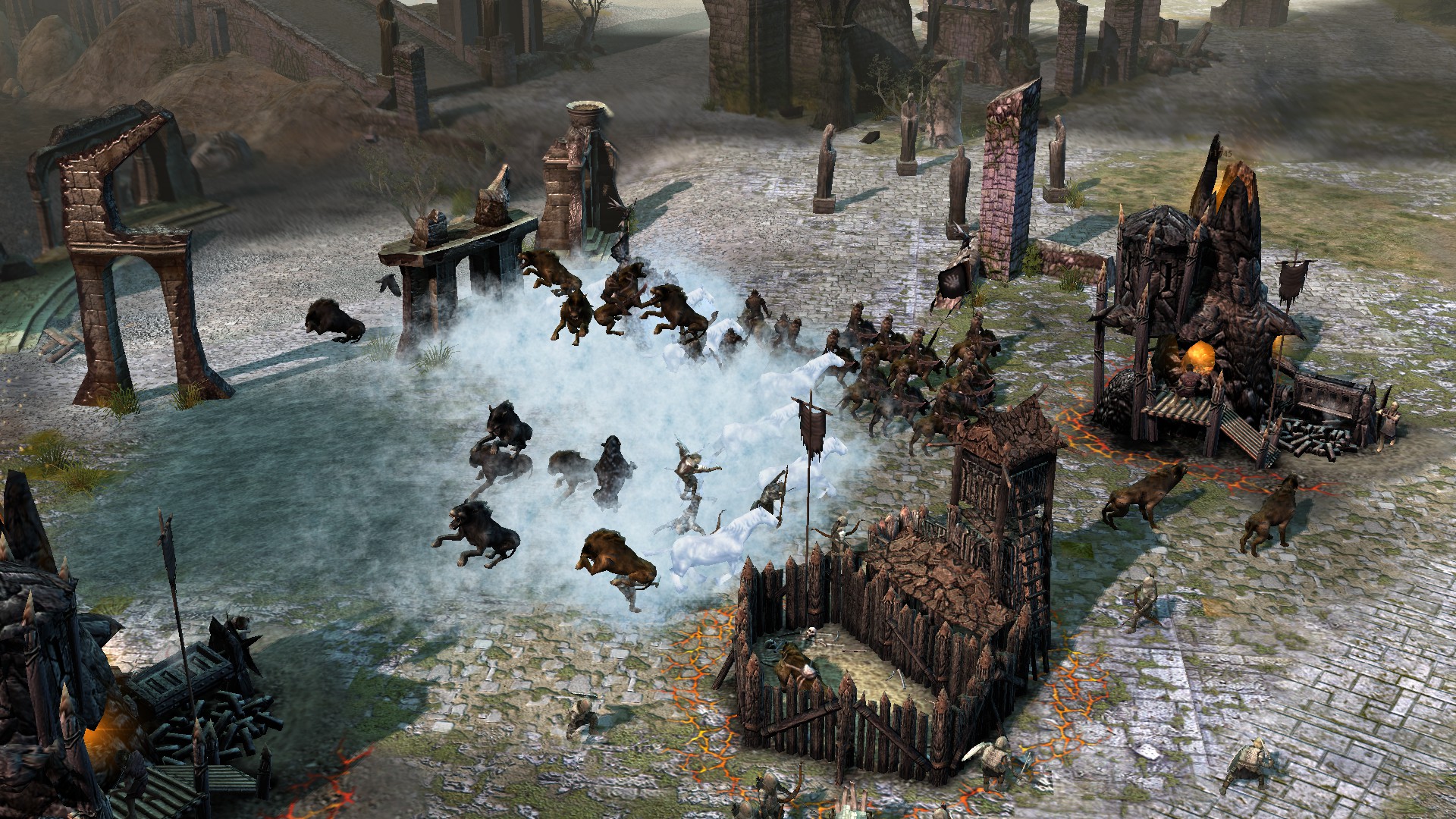 That's it for now. I bet you're expecting some news about the release, right? Well, it's fairly close. Final stages tend to take the longest, and our list of fixed bugs has grown quite impressive of late.

Join us on Discord where you can talk with the team and play the mod with others. Also consider supporting us on Patreon.

wow this is very nice can t wait for the new release :D

I accept the new spellbook with the 405 points.

Awesome to hear that the release will be soon, but hell, it's worth the wait as we all know.

Personally, I would have preferred gifs instead of still pictures for the powers showcase, and for every description to follow a depiction of said power in the form of a gif or picture,
but that's just me.

I'm 'patiently' looking forward to the next release, now more than ever. :)

One question though, I presume given your description that the "Blessing of Ulmo" will also heal/remove status effects (such as poison, etc...), yes? It wasn't exactly clarified.