An indepth look at Dol Guldur's spellbook. Not a joke.

Posted by MathijsRevora on Apr 3rd, 2020

"Sauron was become now a sorcerer of dreadful power,

master of shadows and of phantoms, foul in wisdom,

cruel in strength, misshaping what he touched,

twisting what he ruled, lord of werewolves;

his dominion was torment." 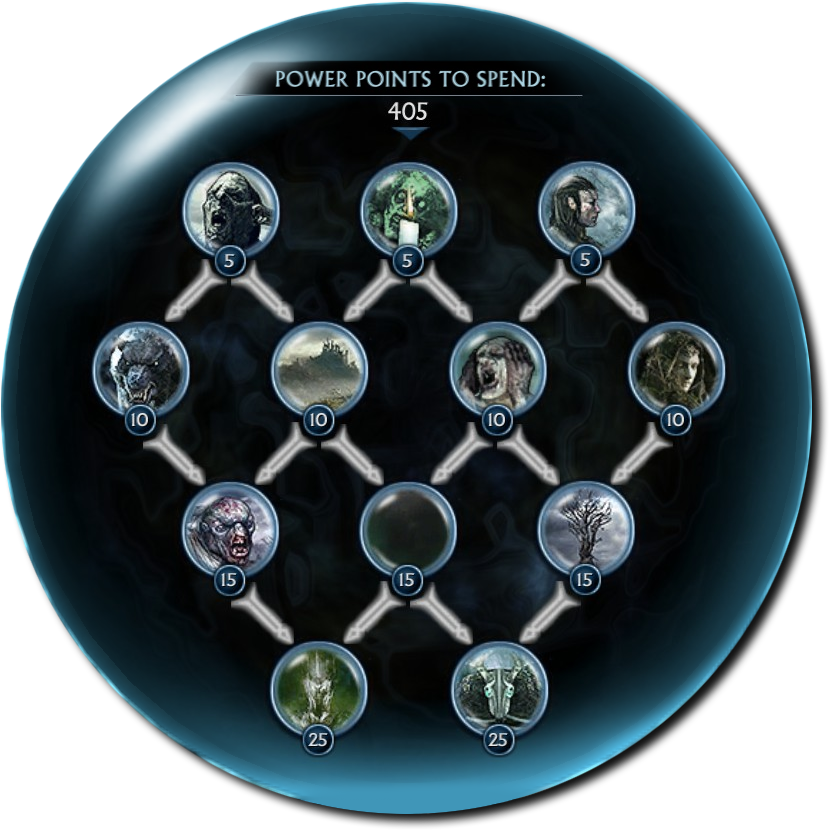 Carnage
The Necromancer of Dol Guldur cared little for the lives of his servants. As long as they fulfilled their purpose in battle, their death was never a cause for concern. Even the great armies of the East and South were viewed as expendable by the Dark Lord, while the orcs were treated little better than Sauron’s prisoners. Even in death, Sauron would find a way to extend their pain as he worked his fell sorcery.

Carnage will grant target units double damage while reducing their armour by 50%. This will allow the basic units to earn experience quickly through slaying foes, while also letting them die faster to speed up their transformation into Risen Dead.

Don’t Follow the Lights
At the end of the Second Age, the forces of the Last Alliance fought against the forces of Mordor on the plains of Dagorlad. While many orcs were killed, countless elves and men were also slain, including the Elves of Lothlórien and Greenwood under the command of King Amdír and Oropher. As the years passed by, these plains were slowly covered by festering marshland. Those who travelled in these marshes spoke of mysterious candles of light and images of the dead under the water. When Gollum led Frodo and Sam through the marshes on their journey to Mordor, he knew not to follow the lights, lest his master were to join the unquiet dead beneath the water.

Don’t Follow the Lights summons a spirit that is identical in appearance to the Tethered Shades, the builders of Dol Guldur. The spirit will passively weaken nearby foes and will disappear instantly if attacked, stunning all nearby foes in the process and reducing their vision.

Chill of the Grave
As the Necromancer grew in power, he began to send evil spirits into ancient barrows he discovered nearby. To those Men that yet dwelt near, these grave-mounds were a mysterious reminder of the nobility of forgotten times. This changed when the dead began to rise from their slumber and set out to haunt the living. From them on out the barrows were avoided by all, and stories were told of dark spells that would leave their victims helpless against the grasp of the fallen.

Chill of the Grave can be cast on enemy forces to slow them down and poison them for a short time. 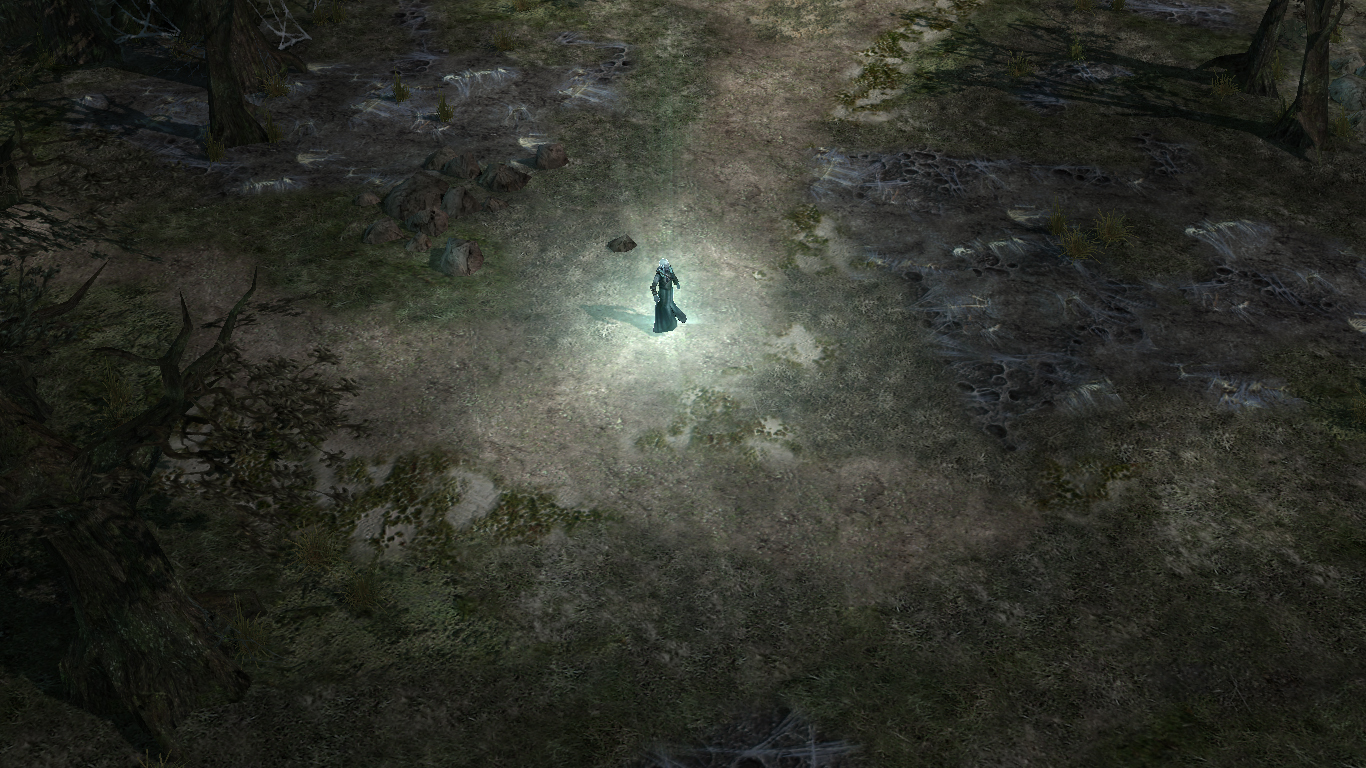 Spawn of Carcharoth
Wargs, wolves, and werewolves had been under Sauron’s command ever since the dark days of the First Age, who was often called the Lord of Werewolves. It was said that the greatest of their race were in fact spirits - lesser maia that had chosen to take the shape of these fell creatures. Ever they dwelt near him, freezing the hearts of his enemies and hunting them down.

This power summons two battalions of Black Wargs led by their Great Alpha. The Black Wargs are able to disrupt enemy forces by trampling them while the Great Alpha can deal high single target damage with its Lunge ability.

Spell of Concealment
While hiding in Mirkwood, Sauron was careful not to draw attention to himself. The old Silvan fortress of Amon Lanc long appeared to be abandoned, and even when the Wise became aware of an evil presence dwelling within they long held this Necromancer to be little more than a Man or, at worst, a Nazgûl. It was only when Gandalf the Grey personally investigated the pits of Dol Guldur that he realized the return of their old foe - after precious time had already been lost.

Spell of Concealment will cover an area in a mist that can hide allied units and buildings. It will also weaken enemy forces within the mist.

Dark Hysteria
Sauron has ever been a skilled intrigant. When he was captured by the Númenoreans, he rose from prisoner to personal advisor to Ar-Pharazôn himself. In later years, he used the palantîr hidden within the Tower of Ecthelion at Minas Tirith to slowly break the mind of Denethor, simply by choosing what the Steward saw and what remained obscure. Sauron’s false promises have resulted in generations of war and fear in the South and East, causing many wars between tribes and nations.

Dark Hysteria can be cast on target units. Those affected by the ability will fight against each other for a short time.

Forest of Fear
The corrupting influence of Dol Guldur spread throughout Greenwood during the Third Age. As the elves retreated further north, their ancestral lands were overrun by dark creatures. Thick webs coated the twisted trees, and any travellers in the forest were at risk of encountering the brood of Queen Saenathra - an ordeal that only few survived. Soon the primeval forest of Eryn Galen, Greenwood the Great, became known as Taur-nu-Fuin, the Forest of Fear, or Mirkwood.

Forest of Fear is a castable land power. As it corrupts an area of terrain, allied units within will have increased vision while enemy units are slowed down, terrified and will lose all leadership. The power will also summon a large number of spiders that will attack nearby foes. 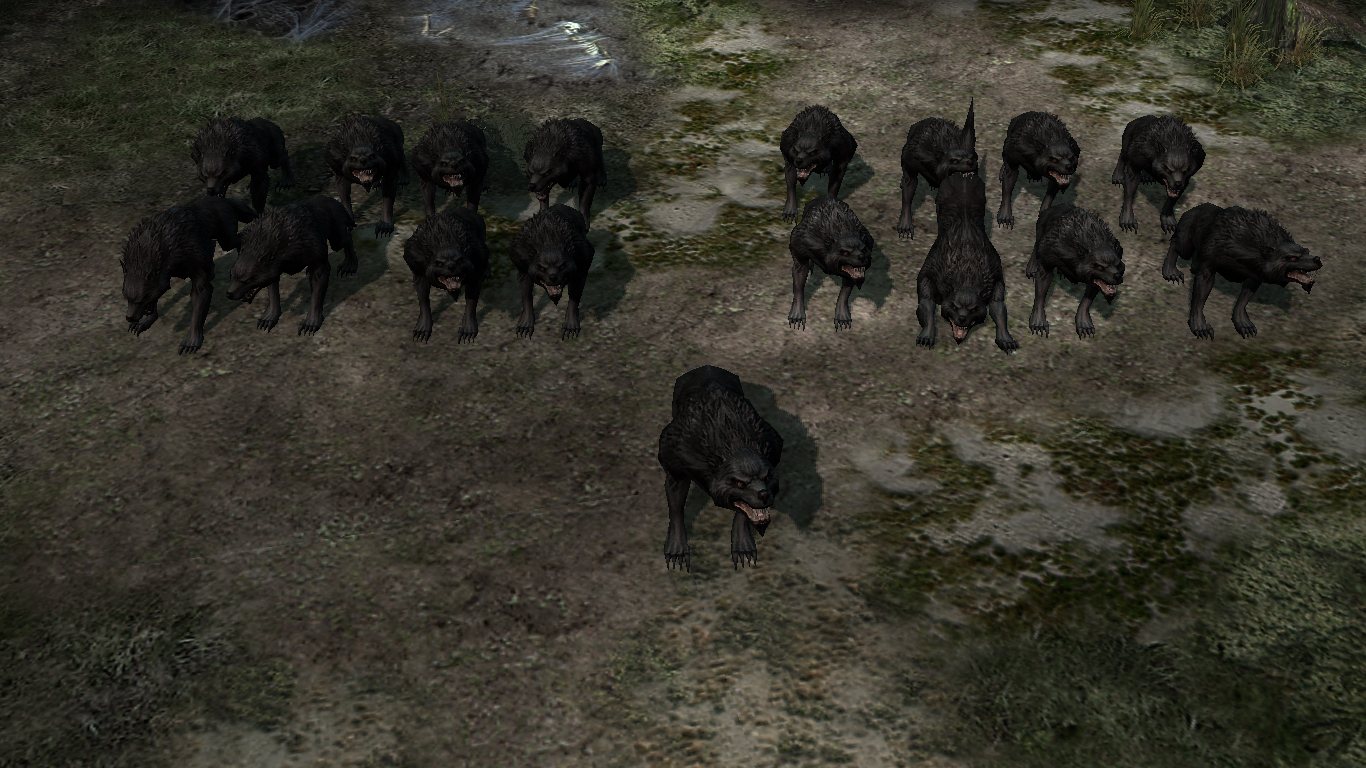 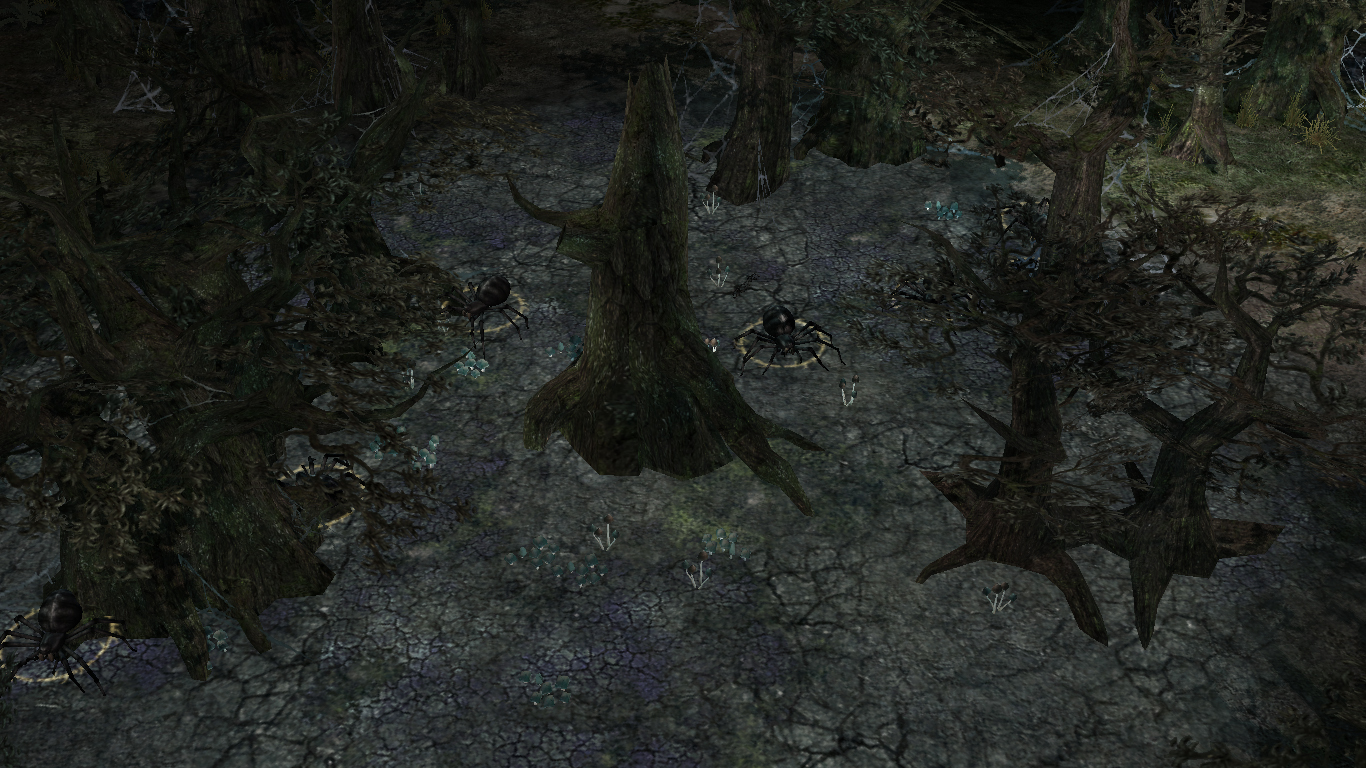 Spiders skitter within the Forest of Fear...

Undead Monstrosity
"Slowly it rose from its shallow pit: a hulking creature, its massive, bleached white bones sticking through its sagging skin every which way, their joints held together by chains and massive steel bolts. Its mouth ajar, its eyes hollow and dead, it looked around as if confused, groaning sorrowfully ere it noticed us..."

This ability summons an Undead Troll. The Troll has an enormous amount of health and armor, and lowers the armor rating of nearby foes. It’s able to use its hook and chain to grab and stun enemy heroes, as well as spew a barrage of Toxic Bile to deal corrosive damage. If the Troll is not killed before his timer runs out, the gases within its bloated corpse will cause it to explode, blasting back surrounding enemies.

Darkness
The armies of Sauron shunned the sunlight as it burned their skin. To prevent this, Sauron used his sorcery to influence the weather itself. As his armies marched, thick clouds of smoke and ash were sent ahead to darken hearts and council. The air itself grew heavy as the winds brought forth the tidings of war.

Darkness is used to buff the armour and damage of all allied units across the map. It will also end enemy weather spells such as White Winter or Freezing Rain.

Wither
As the Necromancer influenced the environment around him, his power seeped into the foundations of the dwellings that were scattered throughout Southern Mirkwood. Once mighty Silvan structures began to crumble and collapse into dust as the years went by. Cracks split the stone walls and creeping vines clung onto the walls. Wood began to rot and metal began to rust, and Sauron’s influence reached further and further north with each passing day. Wherever his servants walked, decay followed close behind.

Wither is used as a weapon against fortifications. It can deal heavy damage against structures in a large area while also disabling them for a short time. 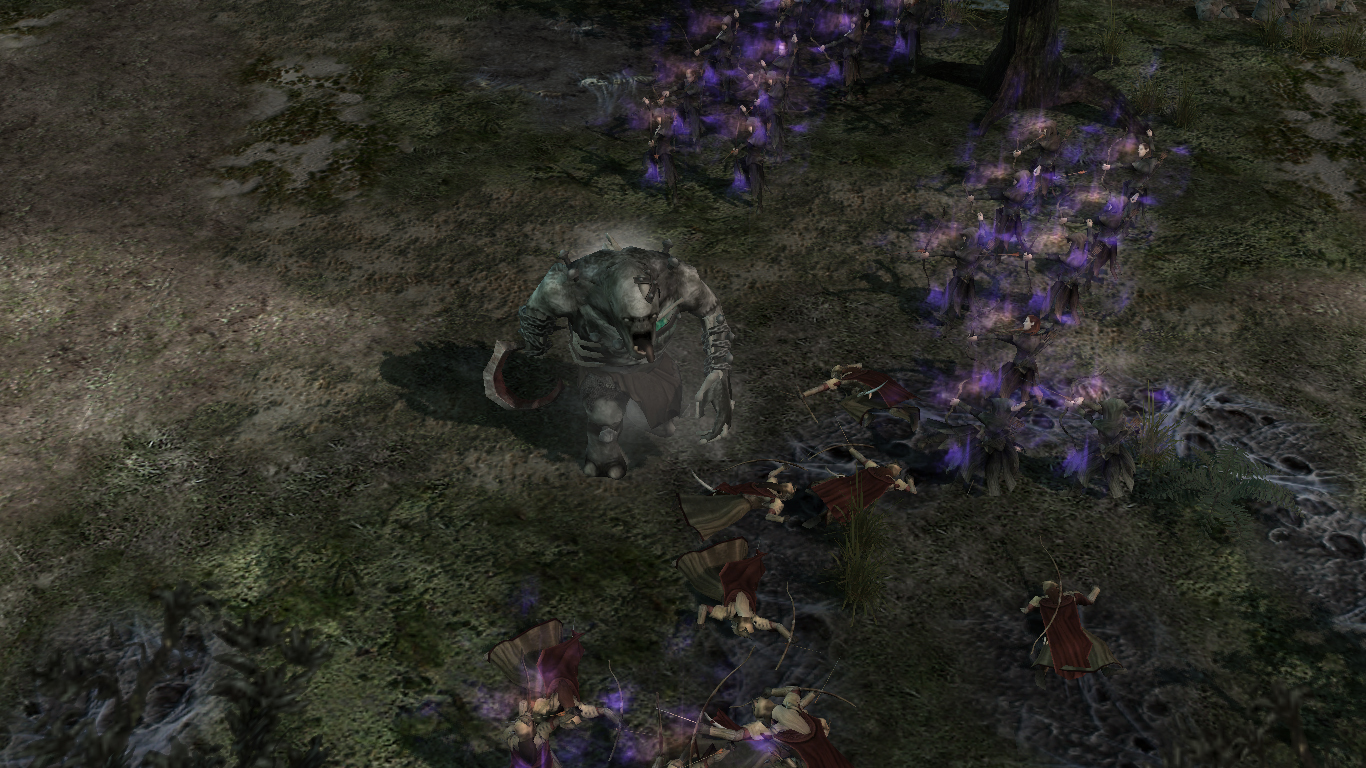 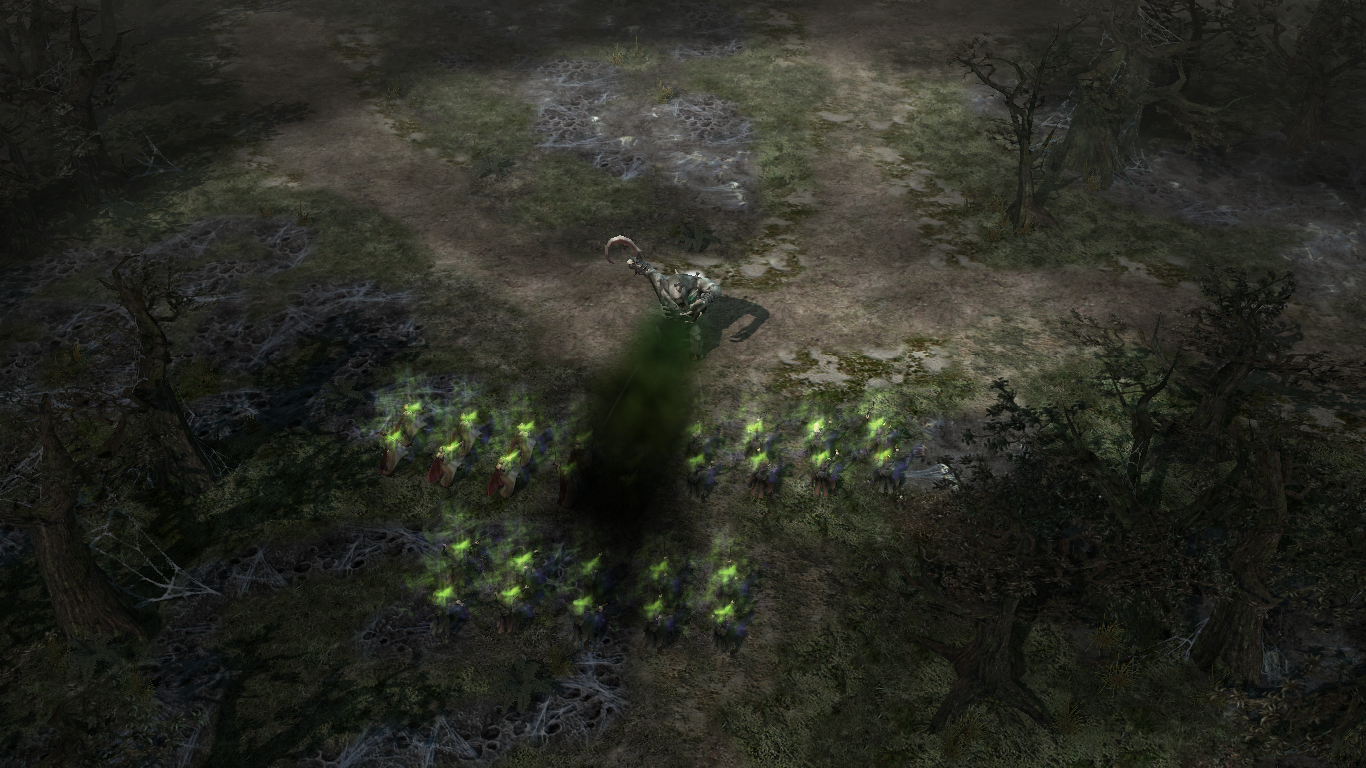 Gift of the Necromancer
Over time, the Necromancer’s corrupting influence became almost an entity on its own, roaming the forest-lands, siphoning the life of everything it came across. Prisoners within the fortress became gaunt shells of their former selves, and even the orcs in its garrison would find themselves slowly falling apart. In Dol Guldur, death is no escape, and once the Gift of the Necromancer had consumed a victim, its spirit would rise to further carry out its master’s command.

Gift of the Necromancer summons a controllable, swirling green mist. Allies and enemies caught within the mist will take damage and turn into Wraiths upon death.

Bane of the Greenwood
Not long after Sauron came to Dol Guldur, a terrifying entity began to roam the forest. It fed on the spirits of lost Elves and Men within the forest, growing ever more monstrous. The souls of his victims followed close behind, their hoarse voiced clamoring, unseen to all but the most perceptive of Elf-eyes. It came to be known as the Death of the Forest: the Gwanthaur.

Bane of the Greenwood summons the Gwanthaur. The Gwanthaur is a creature of terrifying power, able to destroy structures instantly, consume allies and enemies alike to increase its strength, and can unleash a horde of lost souls to cut through groups of enemies. 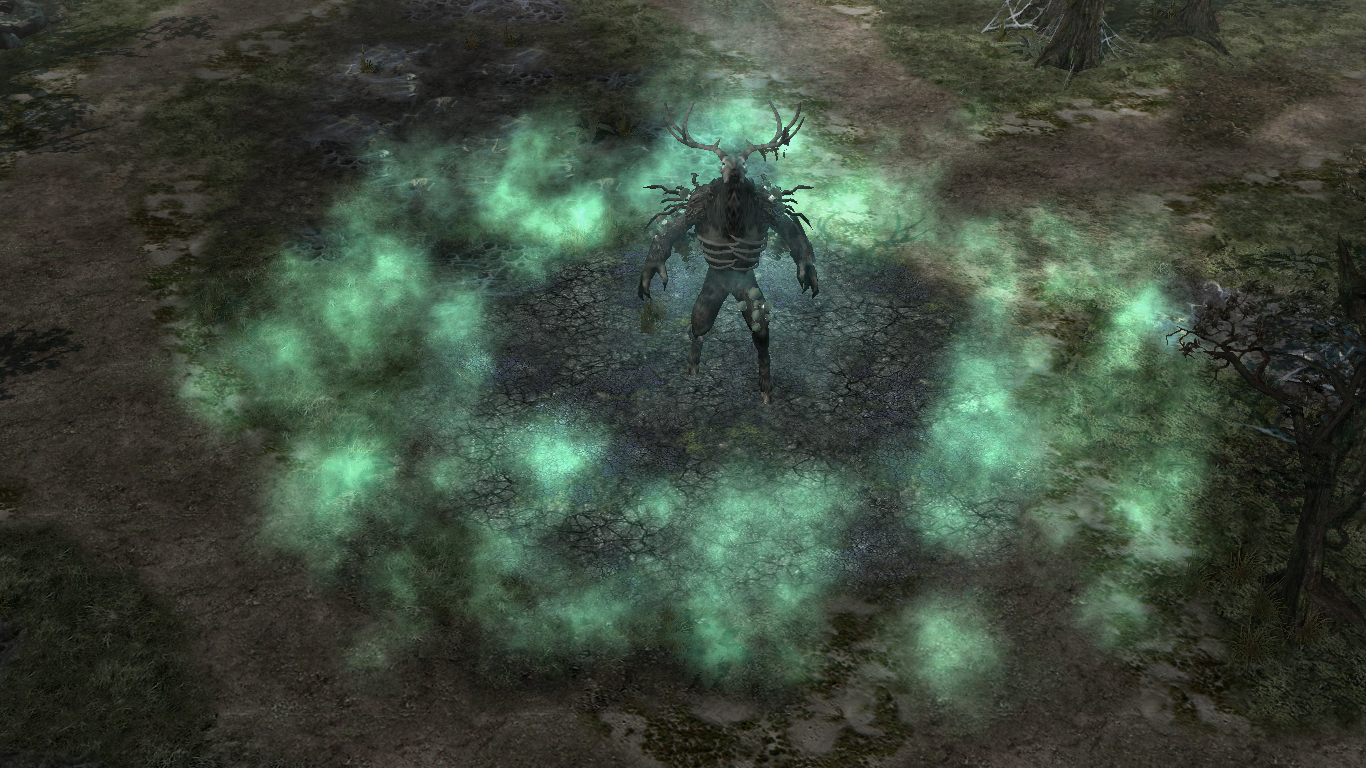 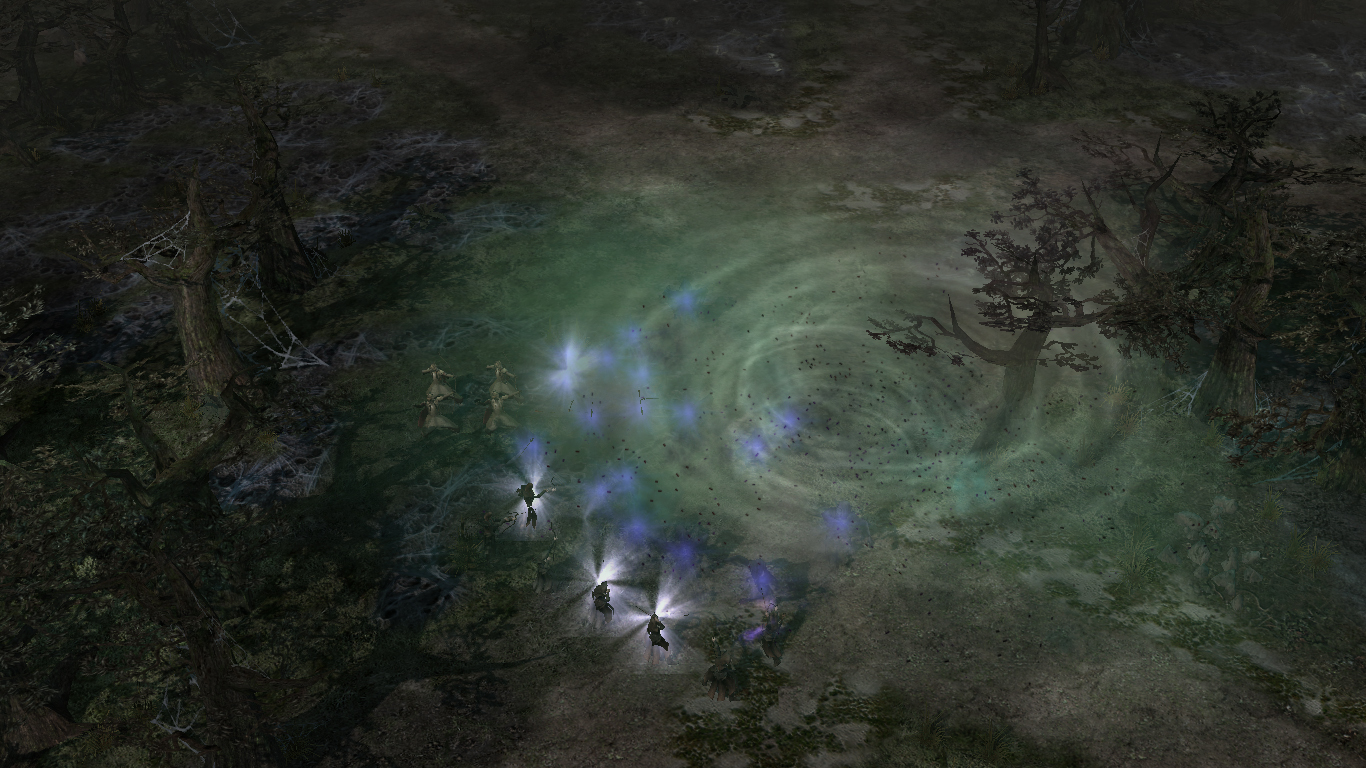 It's an ironic gift

That's it for this article. Dol Guldur is now very close to completion. No release date (of course) but we think it's in good spot now. Wash your hands.

very interesting, it has a decay or corruption dynamic that's really appealing.

Wow. You guys really nailed the flavour of Dol Guldur. Really excited to play it, and of course the Greenwood to fight them when they come out eventually too.