Tale of Echoes will feature a deep spell customization system that will allow players to customize the spells of their magic-casting characters to fit their needs. 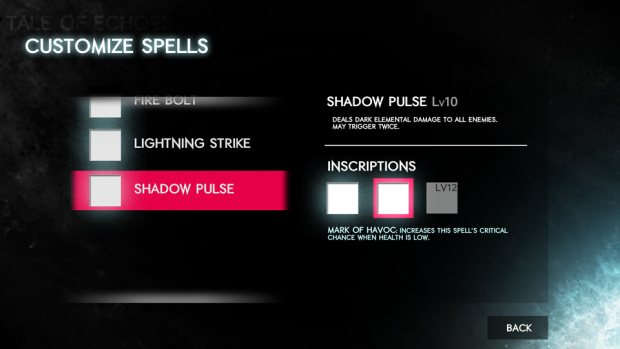 Rather than learning specific spells, you collect Blank Spell Scrolls from various sources. Spell scrolls will allow you to learn generic spell types, such as Bolts, Strikes and Pulses. Bolts are projectile spells, which deal damage based on distance. Pulses, on the other hand, are area of effect spells which damage all enemies in range.

Customization:
You may further customize your spells in the following ways:

Some spells may have rare scroll variants which allow for more inscriptions to be added to a single spell.

Caster Affinity
Caster affinity is a stat that is based on a number of things, such as the frequency with which you cast certain elements, the level of your spells and the number of spells of the same element. This system will grant you bonuses accordingly. If you choose to specialize in fire elemental spells, your fire potency will increase, however, the system will not punish you for mixing and matching spells, it will just grant you a different affinity bonus.

Caster affinity will also unlock special abilities (more on these at a later time).

This is just one system in Tale of Echoes. I'll be sharing more on different systems in the near future including Combat Abilities (yes, non-mages will have a similar system) and Combat itself.
Thanks for reading!

This is good for people who like to customize a lot.(me)So great work.