Speed Run! (C) Da Force Devs Speed Run! is our first release and is currently in alpha.The main game mechanic is the concept of staying within the screen and not hitting the outer edges. This will be incorporated with other mechanics such as shooting and combat. There will be obstacles and levels added to the game. Alpha is currently available for download. The game has been coded in Java and the source is available in the download along with the compiled .jar and the artwork. Matthew Allen 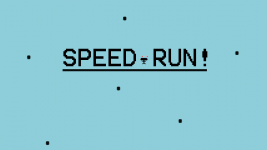 Hello everyone.Alpha 1.2.5 has been released for Speed Run!Why 1.2.5 not 1.3? as announced in 1.5 version 1.3 would implement either enemy's or another form of object to add difficulty to the game and that is still coming.
So what did we change in 1.2.5?Support for 3 preset resolutions : 720P , 900P , 1080P all at a 16:9 aspect ratio.
Removed many untidy and unused pieces of code that was using up resources.Fixed various glitches with respawning.
Added debug menu (Activated by F3)
Post a comment
Sign in or join with: