Today we are showing off a render of the most numerous of the French pistols used in 1940, the Mle 1915 Ruby.

Today we have a render of the most common pistol in French service during both World Wars: the Modèle 1915, known perhaps a bit better as the Ruby. 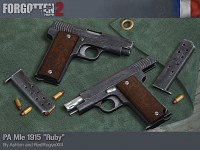 The massive attrition of weapons during the First World War had been rather unexpected, and the French arsenals were running flat out just to replace losses of rifles and machineguns. However, as the front lines stagnated into trench warfare, the importance of pistols began to increase. With no spare capacity to produce more of their model 1892 revolvers, the French turned to the arms industry in the Eibar region of Spain.

In 1903, Colt had introduced John Browning's 1903 Pocket Hammerless pistol. An instant hit, it was widely copied in Spain due to a quirk of patent law. Since Colt didn't produce the pistol in Spain they couldn't patent it there. One of the various versions of this pistol was the Ruby, made by the company Gabilondo y Urresti and aimed towards the military market.

In 1915, The French were sent several examples to evaluate, and by May they returned with an order for 10000 per month. Such was the demand, this had risen to 50000 by August. Unable to keep up, Gabilondo sub-contracted out production to first 4 and finally 7 other manufacturers. Before long the French were purchasing copies of the Ruby from a multitude of other local manufacturers and this lead to a logistical nightmare, as interchangeability of parts between factories was variable. Most significantly, magazines could only be reliably counted upon to work with the gun they were supplied with, and the French insisted that each manufacturer mark their pistols and magazines to ease this issue.

A robust blowback design with 9 rounds of .32 ACP, the Ruby would continue to see use until well after the Second World War. About half a million were in inventory in 1920, and they would be the most common pistol in 1940. Ours was made by Ashton and RedRogueXIII.