This past week I've been working on unifying the ship code so that player and AI ship code is shared completely. Additionally, I added armor and location based hits on ships. The radar system now includes a couple different types of scanners to add more depth and strategy for targeting and stealth.

Posted by badgerheadgames on Feb 3rd, 2015

This past week I've been working on unifying the ship code and it is just about done. Now the player and AI ship code is shared completely with added scripts for the extra player functions like input and UI things. 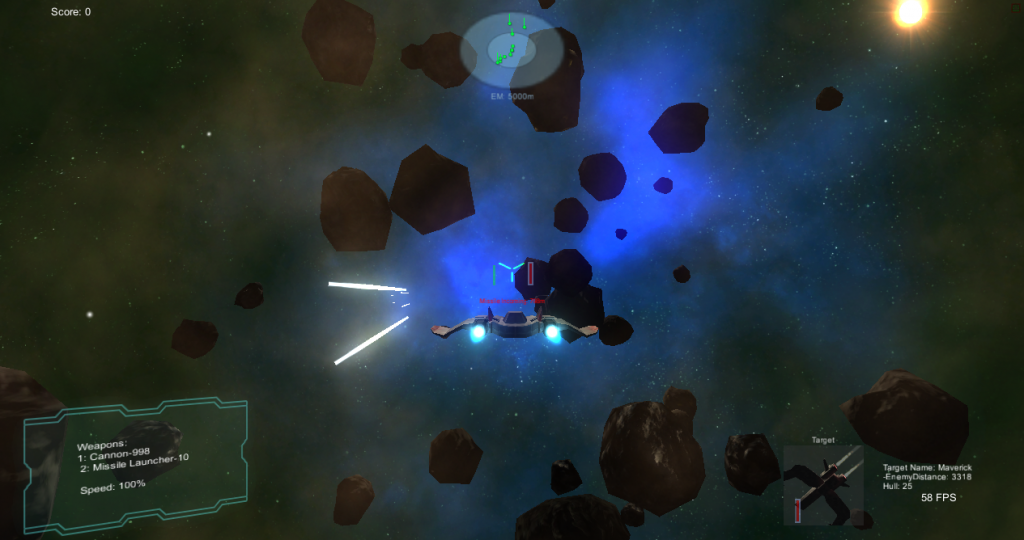 The shared code means that now enemies can use all the components like different weapons and specials. This means more varied ships (of course I need new ship models) with different fighting styles. I also want to redesign the AI to incorporate the ability to switch to different weapons for different situations or employ countermeasures to stop missiles. I am getting close to feeling pretty good about the player systems (by no means done) to go back to focusing on AI and mission scripting so those are going to be the next big push. That and some interchangeable component based cap ship models since they will be needed if I am going to create any type of campaign that is worthy of the game title. According to my giant list of To Do's on Trello, I am 23% done (with the list...) but included in the list are a functioning Battle Editor, 'complex AI' and an energy management system. So yeah, almost done!

I've also been revamping the 'radar' system - I am calling it a scanner now in game.

The scanners will have some nice game play effects. An asteroid or debris field will make the Visual Scanner pretty tough to track enemies while it should be fine in open space. Chaff could be launched to further distort a Visual Scanner. The EM and Heat scanners can come into play in more dense areas, but stealth ships or ships trying to be stealthy might try to mask their EM or Heat by running cold or creating anomalies. A ship might jam an EM scanner with lots of waves. Of course the most lowly fighter probably won't have the advanced scanners unless the player upgrades. The Smart scanner is the magic radar that tells you what everything is and ignores unimportant stuff. 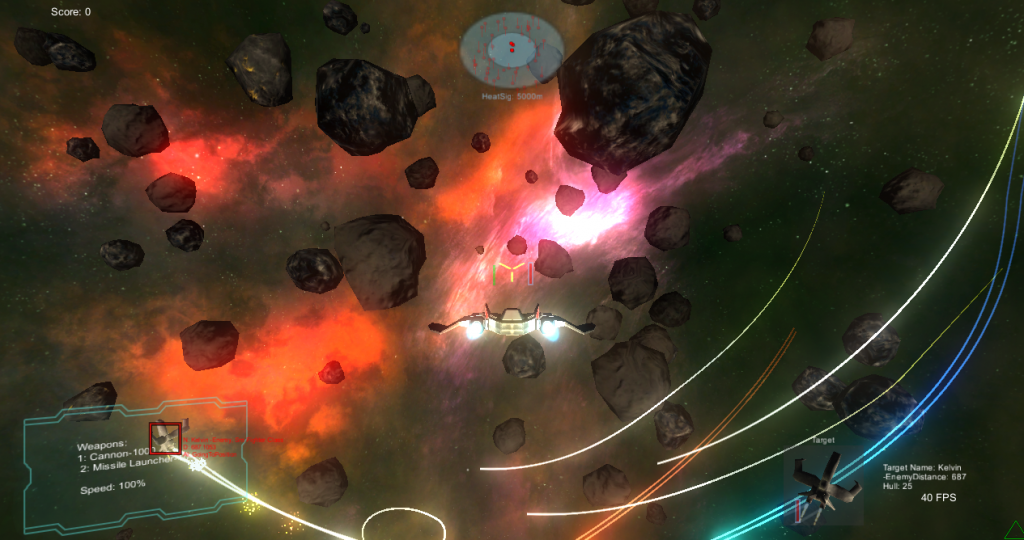 I envision Scanner / ECM ships like the Raptors in Battlestar Galactica doing scans and blocking them. Possibly being in a wing with one would give you a scanner buff while you were close by allowing you access to scanners beyond visual that you couldn't get alone. Additionally, some stealth ships may need to be targeted manually. Currently ship targets can be cycled through with the E key (Next Enemy Target) or C key (Closest Enemy). If a target is undetectable by scanners, you should have to get it in your crosshairs and then manually target it with the R key (Right in Front of Me Target Key). After manually targeted, the stealth ship will be added to the list of targets to cycle through... I also imagine some stealth missions where the player tries to get some surveillance by drifting undetected. Could be awesome.

I've also added a target camera and changed the UI in that area. The stock Unity sample assets box just isn't really meshing what I need to display there. I sort of like the angled-ness of the boxes, but they are a little limiting with what I want to display. For now I may opt for a flat UI until I build cockpits or other assets UI assets that make everything look cool. I'm more programmer than artist and my dreams for the game sort of extend beyond the art I can create for it at the moment. In the meantime, I am going to build all the cool functionality and drop the art on it when I can. 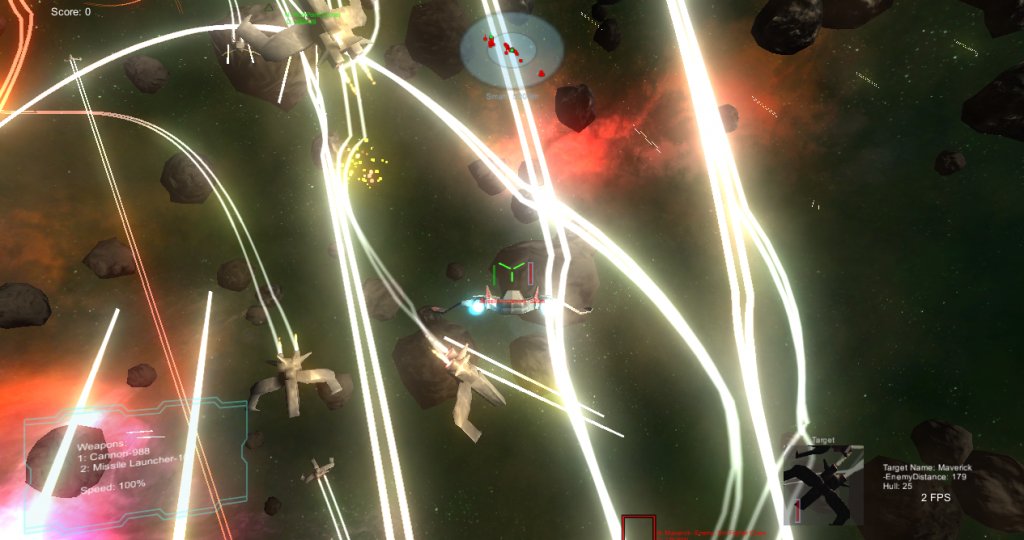 You might also notice the little rectangle with a grey outline and a red inside. There is also one next to the crosshair. These are currently the armor and hull status system. Ships can now be damaged on the sides, the front and the back. If any one side's armor goes down to zero, the hull is exposed on that side. Too much hull damage = boom! This adds some strategy to fights, you can make sure to favor one side if its damaged and keep it away from the enemy. If you lost all the armor in the front of the ship, you won't want to play chicken with the enemy on a straight joust. Eventually some of the ship components like guns and radars will also have models stuck to the outside of the ship model. These will also be able to take damage. You can get your scanners knocked out or your engines.