Some information about our player character, ATKV-1 (All Terrain Kill Vehicle), as well as player upgrades and powerups. 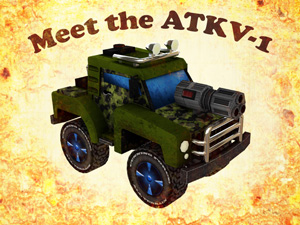 Some may already know, but for those who don’t the main player character for Space Safari is a vehicle called ATKV-1 (All Terrain Kill Vehicle). This is a jeep-like vehicle with armor, weapons, and special abilities. Today we wanted to go more in-depth about this character and the available powerups and upgrades. At the beginning of the game, the ATKV-1 is in it’s most basic form and comes with a standard frontal cannon and spring loaded wheels which allows for jumping. As you progress further into the game, there are various powerups that can be picked up, as well as various upgrades after each level. Once the permanent weapons and upgrades are unlocked, they can be used in previous levels as well. Below are more details about these powerups and upgrades.

Please note that everything below is still a work in progress and may change in the actual release.

Throughout the levels, there are powerups that can be picked up, most of which drops from enemies. These powerups are:

After completing levels successfully, certain upgrades are unlocked automatically. These upgrades are:

Also after completing certain levels, certain weapons are unlocked permanently. These are:

The following weapons are picked up like powerups, but it seemed more appropriate to put them in this section instead:

When this mode is unlocked, entering underwater areas will transform the ATKV-1 into an underwater vehicle with thrusters. While in this mode, certain unique abilities and weapons are available: