The theme: Mac mods with names similar to certain PC mods. One big mod and five mapsets, finally some major content after a longer than expected break. Dig in.

After the brief Laz interlude last time, we're going back to everyone's favourite theme: themes! You see, there's a number of PC and Mac mods which happen to have identical or similar titles while otherwise being made by different people and generally having nothing to do with each other. Often it's because said titles are fairly generic, but there's some funney coincidences here and there. Let's explore them. Six mods today, but only one big mod and several accompanying mapsets, as is often the case these last few months. Get used to it.

First off, there was a mod called Road to Neuschwanstein by Barry Muslim aka the Vaultseeker. Pretty famous for its time, an early example of coding changes via hex editing, and of course 60 maps of peak quality. Well, Castle Neuschwanstein by Gary Mule isn't exactly named the exact same (most of these aren't), but it's still funney how they chose the name Neuschwanstein independently. Even if it's a real place. Anyway, Gary's mod isn't as extensive as Barry's, but clocking in at "only" 36 maps, it's still one of the bulkiest Mac releases in terms of floors. Mapping itself is consistent in quality, but fairly predictable, one distinguishing feature being a lot of 3x3 rooms, many of which are empty, but you have to go through them all anyway because some may contain keys. In terms of new graphics, I think I've seen a number of them elsewhere, but either way they have a vanilla feeling to them and they're mostly what you would expect to see in a castle. Same goes for enemies, though don't be surprised if you see Doomguy's snout somewhere along the way. This is this week's "major" release, be sure to check it out. And all the others too. 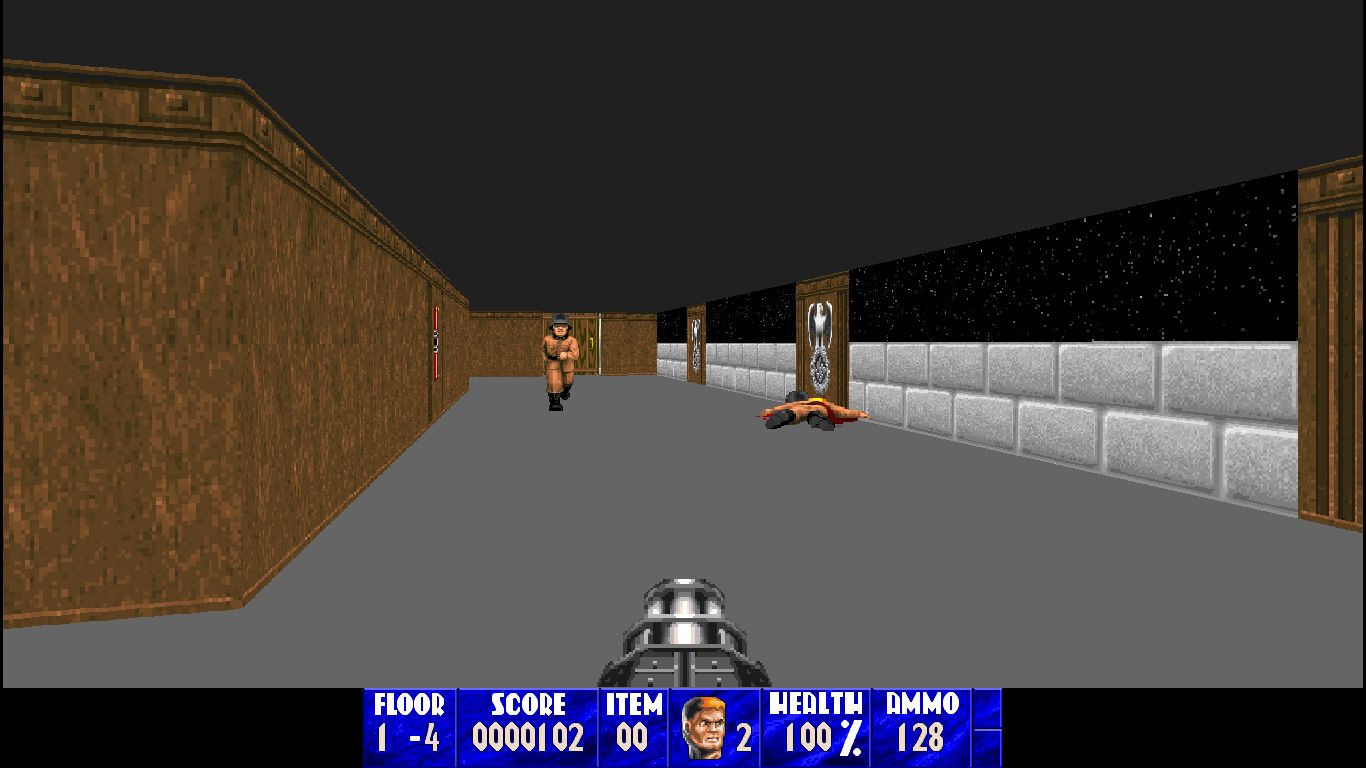 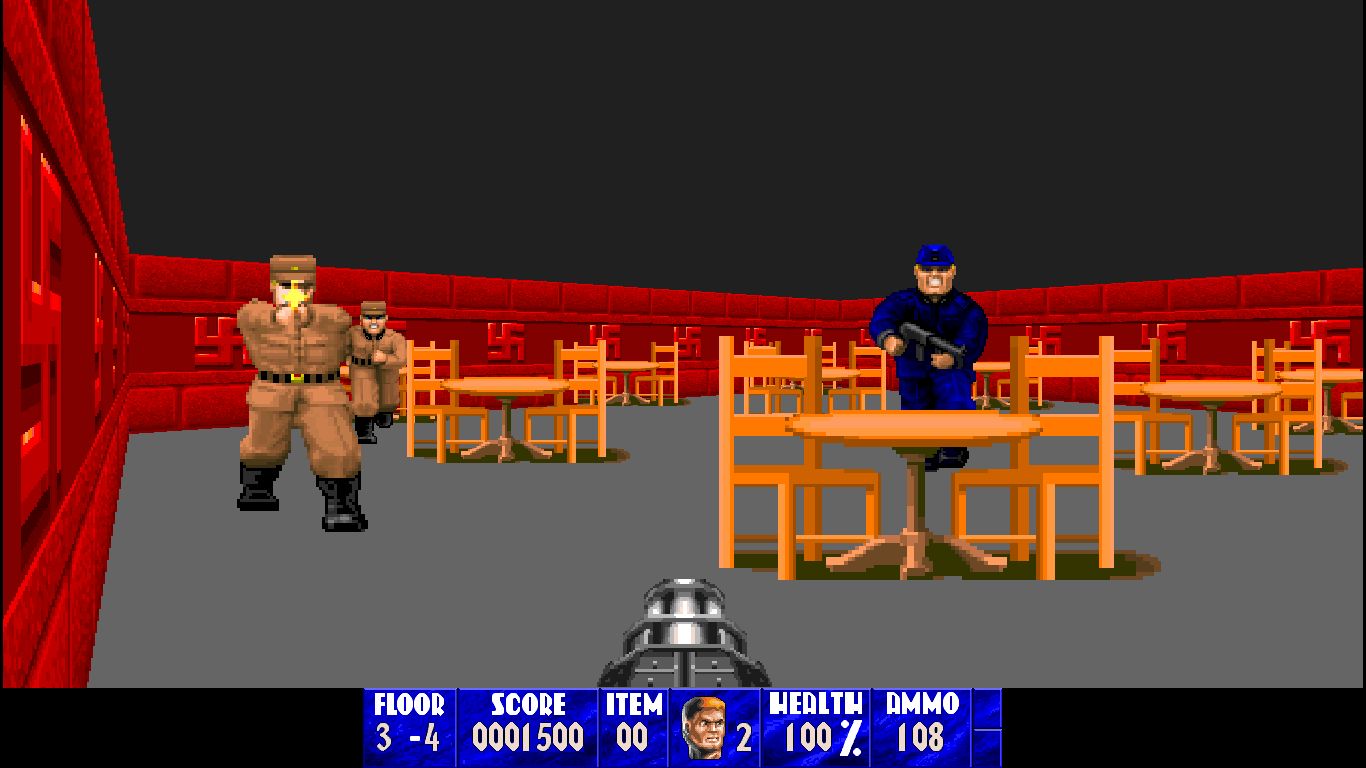 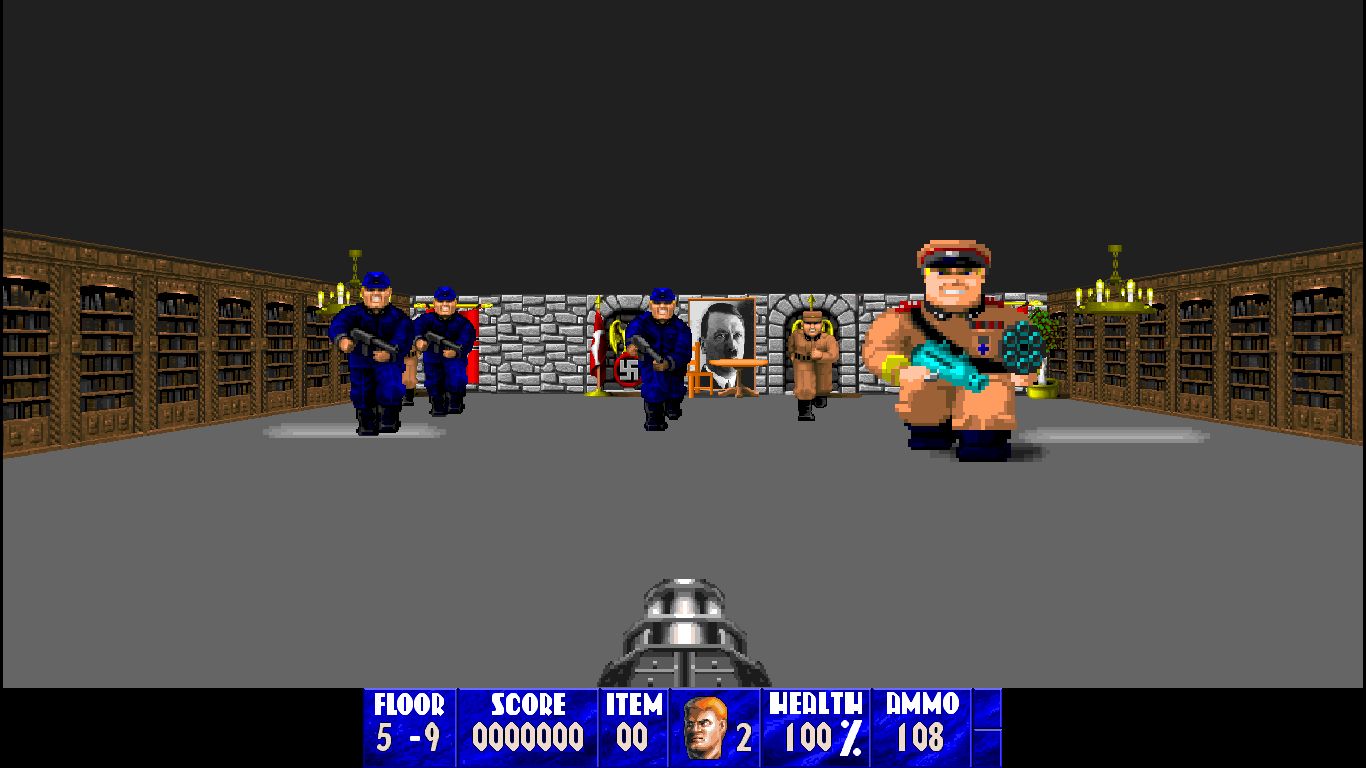 Dungeons of Death! An ancient, 1993 shareware mapset by an unknown author, it displays many of the charming features and trappings of early Wolfenstein mapping. Somewhat all over the place, happy-go-lucky stuff with quite a bit of creativity and passion behind it, complex and involved maps, always high difficulty and a layout that's hard to learn. The Mac mod, Dungeon of Death (singular; 10 maps for the First Encounter), somewhat reminds me of that with its large, freeform maps packed with enemies and, well, stuff. I don't think there's a story to either of those releases. You just kill people. Are we even sure they're Nazis? Maybe you're assaulting the local historical reconstructionist group? Wouldn't that be funny, with all the innocent people dying. Hah, hah.

Dungeon of Death was made by Mike Gerenser and looking at the readme, he asked people to give him an $2 shareware fee for his trouble, so he could go on making more mods. Looking at Dermuda's invaluable list of mods and authors, I can't find his name anywhere else, so I guess it didn't take. Too bad. 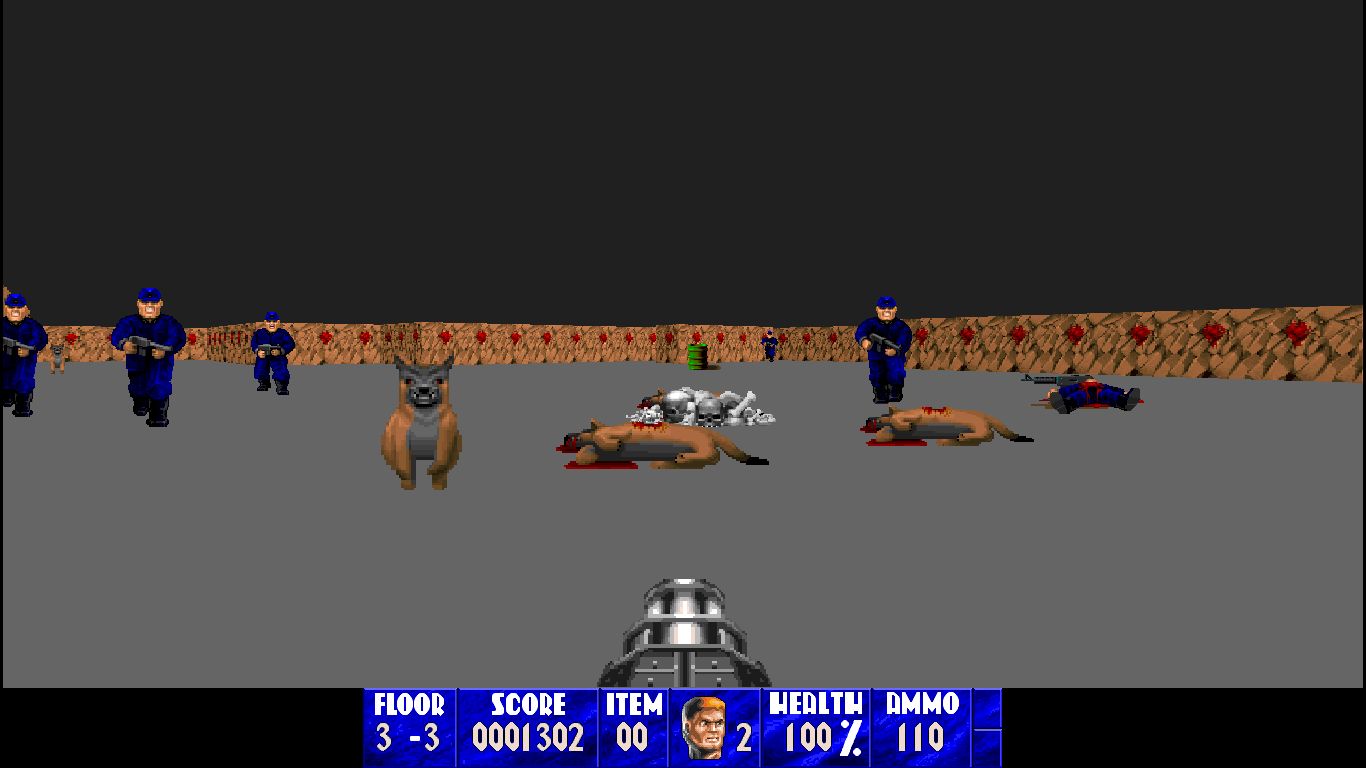 There's several PC mods referring a bunker in their name, but only one called The Bunker - a 2-level release for the Spear of Destiny demo by John Doesnort. The Mac answer to this is also called The Bunker and it's a full 10-level episode for the First Encounter (of course). And what can I say, a lot of this is usual fare: maps are mostly small and compact, difficulty is inconsistent as enemy density can go from mild to insane even within a single map. Still, there's a lot of stuff to collect and kill here, so you'll get your kicks out of it regardless. 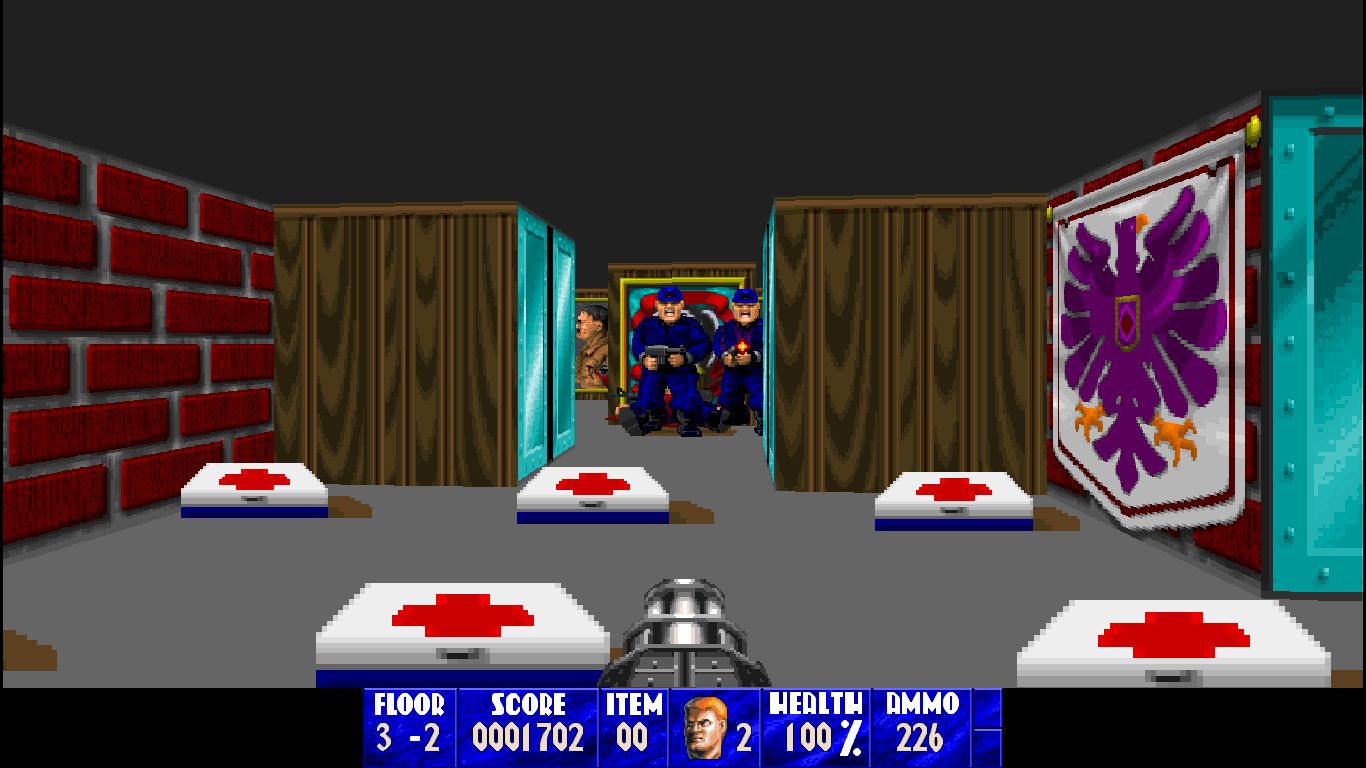 Cool Wolf is another ancient PC mod, this time by Marty Belphegor. 25 new so-so maps and a new VSWAP, it eventually failed to make its way into people's minds. The Mac mod we're looking at is a much smaller thing, being a vanilla First Encounter scenario with 3 maps. I'm not sure if it goes by the name of Cool Wolf or Cool Wolf Levels, but it's similar enough as far as I'm concerned. Very quick, very small, but maybe that's what you need. 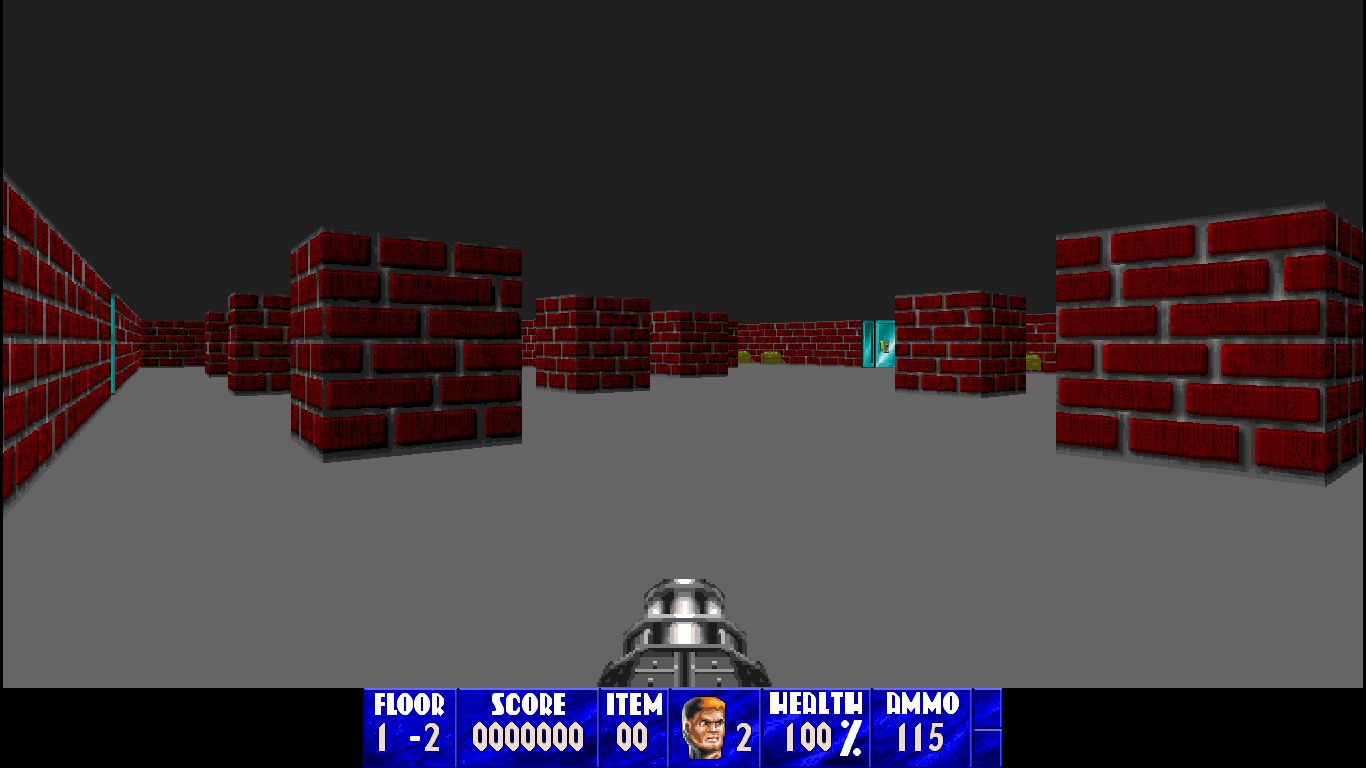 Blitzkrieg. There's actually two PC mods by that name, Blitzkrieg by Barry (again!) and The Blitzkrieg, an unreleased mod by Zach Haggis. Well, our Mac Blitzkrieg is just a 6-level mapset for the First Encounter. Said maps are mostly small and quickly beaten. There's more than enough resources to get rid of all the opposition (although that map 3...) It's not brilliant, but it'll do just fine if you have to feed your MacenWolf addiction. 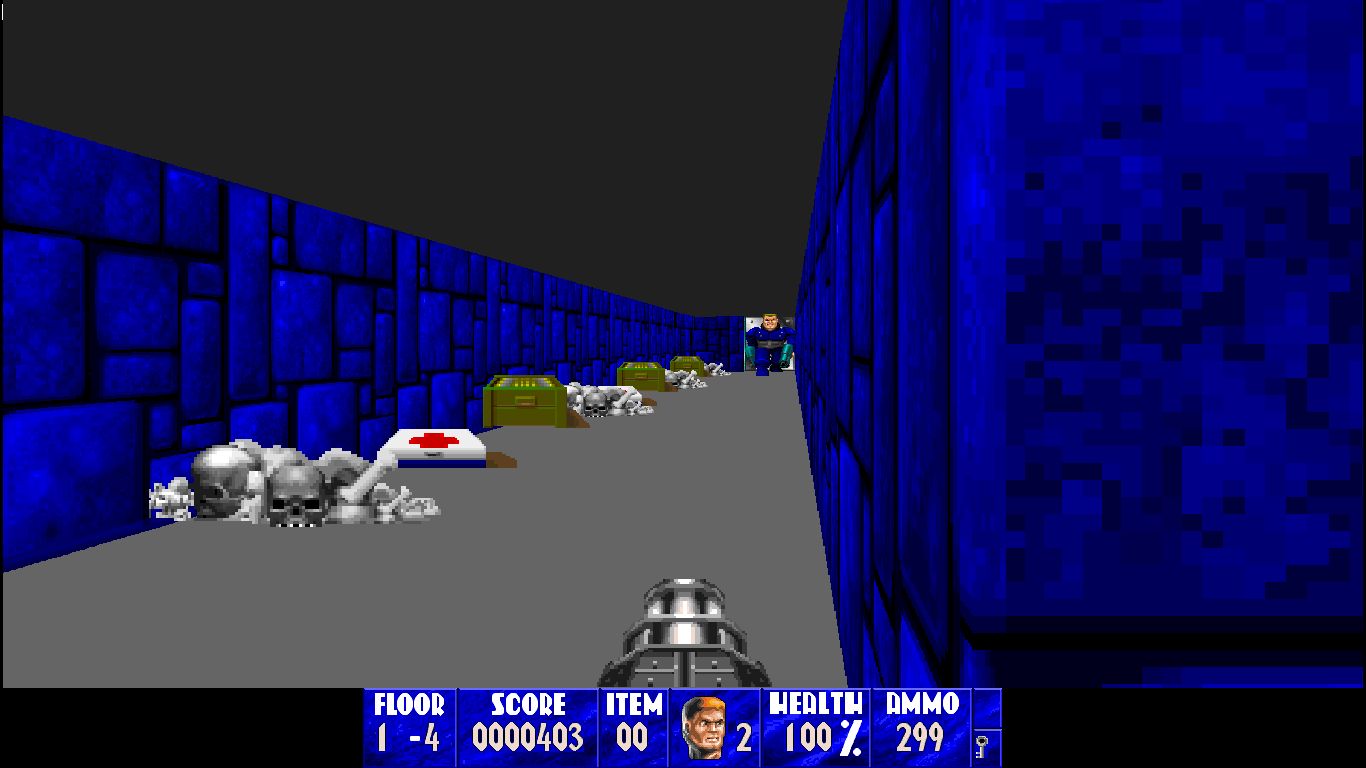 And ultimately we arrive at Ultimate Wolfenstein. Released by Titus the Fox, it had coding changes, plenty of new graphics (taken largely from Lost Episodes and Blake Stone) as well as fifty new maps, which made it a major release back in 1999, although to be honest I was never a huge fan of the mapping. Ultimate Wolf for Mac - four First Encounter maps by Jared Pace - is... well, I don't really know much about it. Vanilla stuff, the floors are large but simple in design, one of them has the word "CURGER" written over it in big letters. Nothing epic, but you can't let a mod go unplayed, can you? Do it. 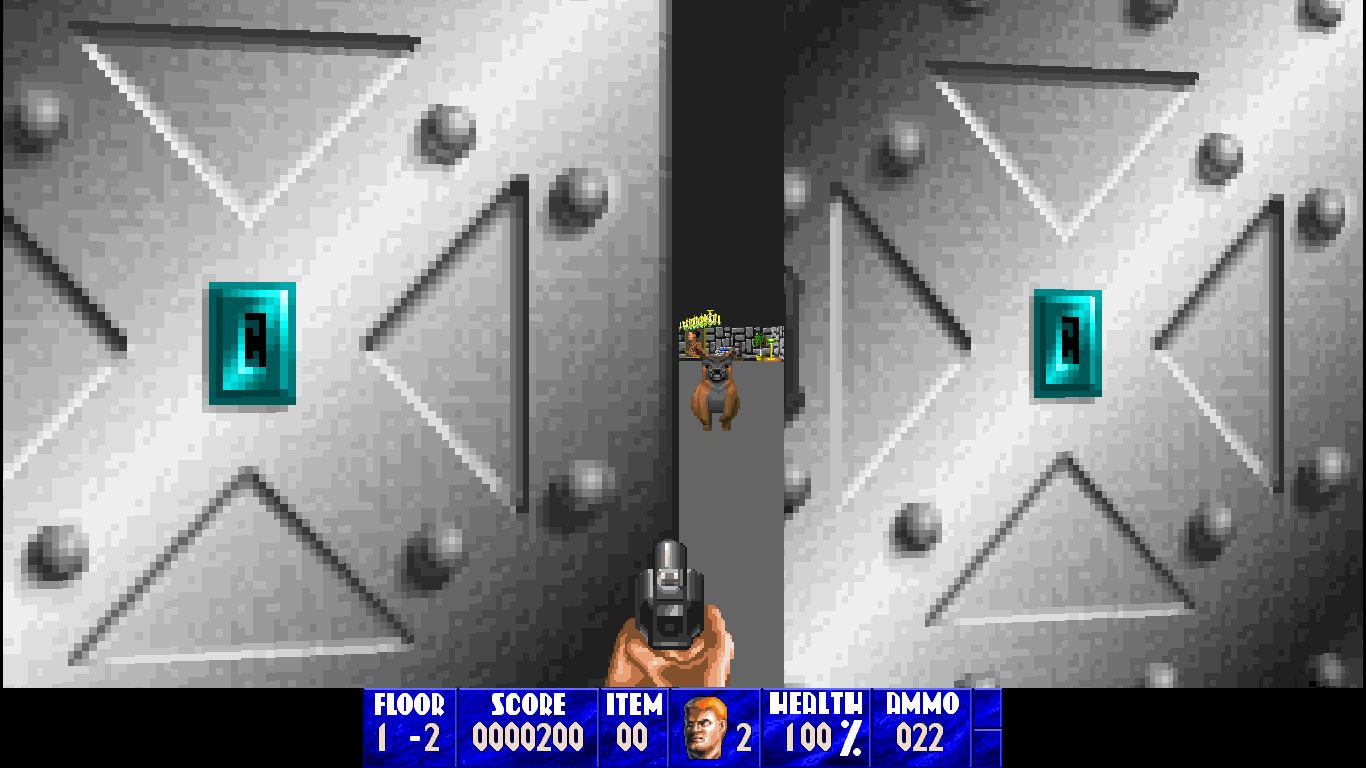 ...there will be more. Watch this space.