Soul Saga got a whole revamping of it's menu system today! The previous system had the phone far too zoomed in to see it's sweet interface, so the menu was redesigned to be more compact. 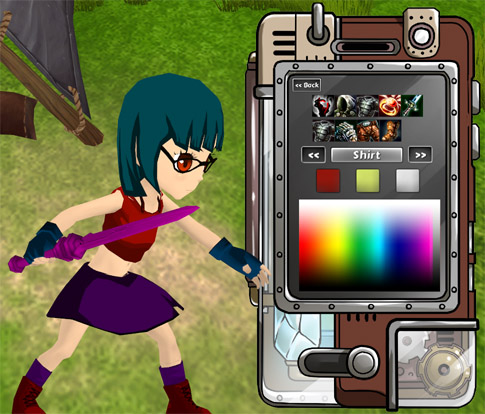 Summary
After receiving a lot of feedback from some friends regarding Soul Saga's menu, I decided to give it a change. Because of the way I had set up the menu before, people couldn't even realize it was a sweet steam-punk fantasy themed phone! I thought hard about how I could compact my current GUI designs so I could shrink the phone so it was much more pleasant on the eyes. I also took into consideration that some menus took less space than others, so using the same phone size for each menu was looking like a lot of wasted screen real-estate.

Character customization was going to be the hardest to tackle, so I started there. After working all day on redesigning the thousand lines of code, purely related to the character customization GUI, I was eventually able to shrink both the code base and the phone down to 50% of their original sizes! This means the phone looks better to you and the code looks cleaner to me. =D

A cool feature is the animated phone size. When changing between different screen in the menu, the phone will adjust to the size of the next menu, so that it's not always sucking up a large chunk of the screen.

Tomorrow
I will finish porting over the main menu and the inventory to the new menu system. I will then add some additional particle effects and skills.