Post news RSS Some new features which await the next alpha of Jobchanger Brigade!

Revamped charged skills, stun locking escapes and area GUI coming up in the next Alpha on December 27 (if the holidays let me, that is!)

Jobchanger Brigade is the coolest of combination of hunting action games with RPG jobs! Take a look at the latest alpha footage if you don't know what I'm talking about!


So today's I'll talk about some of the stuff that I've already created for the next alpha.
First, the revamped charging!

Other than the feast of particles, we know have different charging times for different skills! This means that the warrior skill will charge up super fast (which is a hard to time skill) while the mage's ball of fire will take a longer time to charge up, since it's a pretty easy to hit attack, albeit effective. Also, charging now consumes stamina, which means you can't simply charge up like there's no tomorrow, you'll need to think it through or risk being countered to death.

Second, we have stun lock escape! Sometimes you'll get cornered by a large group of enemies and you would get stuck getting beat up with hit after hit until you die. Now you'll actually get some imortality time to help you survive those harsh battles.

First you're getting beaten to death... Then you just walk through those damn balls

Up next we have a GUI telling you what area you're in at the moment! And also one to remind you of your objective (which also shows a progress bar!) 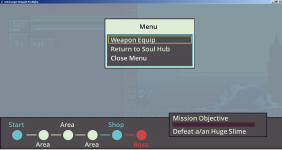 It still needs some tweaking (that white frame is very weird at this point) but it should make the game more intuitive.

You can download the latest alpha on the link below!
It has none of the features I've presented here , remember they are for the next alpha!

If you liked the video, subscribe to our channel below:

Watch us on IndieDB for the latest news, downloads and media!

Please also join us on:

Please hit me with any feedback you have!