Developer update - If you hate technical stuff, ignore this update.

If you hate technical updates then this isn't your lucky day.

A lot actually--just nothing too visual. The project is constantly moving (as you can see in Code.google.com) and we are hard at work building fundamental parts of the engine (RÆL). There have been significant changes, so I will go over them here.


What's next?
We are narrowing down our build and goals for the beta release in July. Since all the "hard" parts are done -- like porting an entire code-base to C++ and rewriting large ports of the engine -- we are now shifting focus for completing our milestone goals. The milestone is here: Code.google.com

So, why will be only featuring one map, a few weapons, and limited game-play? There are certain things that we need to perfect before moving to the larger elements of the game. The weapon code, kit setups, movement, game-play, and authenticity are our main focuses. We know that we won't be popular with everyone, but that's just the nature of this project. We're a small team (as in 1-2 people) so, we would like to prevent being overwhelmed with "why doesn't X and Y happen when I do Z?!".

We wanted to really lay out the goals of Rogue Reborn in case people are hazy on our intentions. So, here's a few topics.

Overall Goal:
Rogue Reborn's focus is on the competitive aspects of Rogue Spear. It can grow to support some of the other dynamics of RS, but for the time, it won't focus too much on single player or "fairness" attributes (such as other forums suggested RR _should_ have).

The other half of RR is providing a generic framework for tracking players, maintaining clans, and keeping statistics. In this way, we can really combat cheating by implementing an account-based system where the players must maintain an account to play. We can do a lot with this and don't plan on changing our minds on it. It will allow us to really provide in-depth game-play and open up a lot of opportunities in the engine.

Cost
Rogue Reborn won't be free, but it definitely won't cost much either. We haven't figured a pricing model, but it will be along the lines of paying for an account, rather than the game. This will help combat cheating as well, since I am sure no one wants to lose an account and have to pay for a new one. It will also encourage consistent players and hopefully entice the building of a community. There will obviously be some sort-of beta account and discount program. Yeah, there's changes going on in-game. Most if it has to do with the weapon framework. The weapon system is much more complicated up-front since we are effectively rewriting how id Tech 3 handled weapons. It's coming along nicely, but it's slow. There's a lot of stuff being intertwined with the work. Lighting and environments have also been another target of development. We're constantly experimenting and figuring out what works best to balance out competitive game-play and "looks". 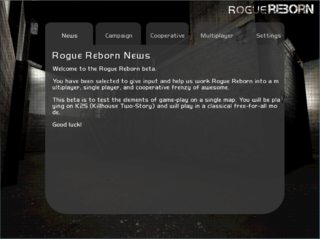 The GUIs are a strong point -- Not because they were so much fun to write, but rather that they allow us to represent data to the user in a quick, but efficient manner. Take, for example, this GUI. This was created with less than 30 lines. Yeah, it's really curvy, but it's to show the alpha/opacity layer support and it serves a good debug for us.

Tought this was dead, great to see its still around guys :)
BTW, if you need a weapon modeller i can give it a try, dont have too much time atm but i can make some guns for you

If you're interested in contributing work you are very welcomed to do so. Send me an email at justinvh@gmail.com -- I'll give you a run-down of what we're looking for. Contributors are well appreciated.

We don't rush people -- The only thing we ask is to license your work in a way that doesn't limit other people from using it. The whole open-source thing.

This is great. Following this with utmost interest!

Still on for July release?