A little bit about some of the games background, currently in-place mechanics, and future.

Posted by InvalidSpacebar on May 1st, 2017

You are a newly captured warrior bound by fate (and debt bondage).
Here is a little bit about our game and some of its features. 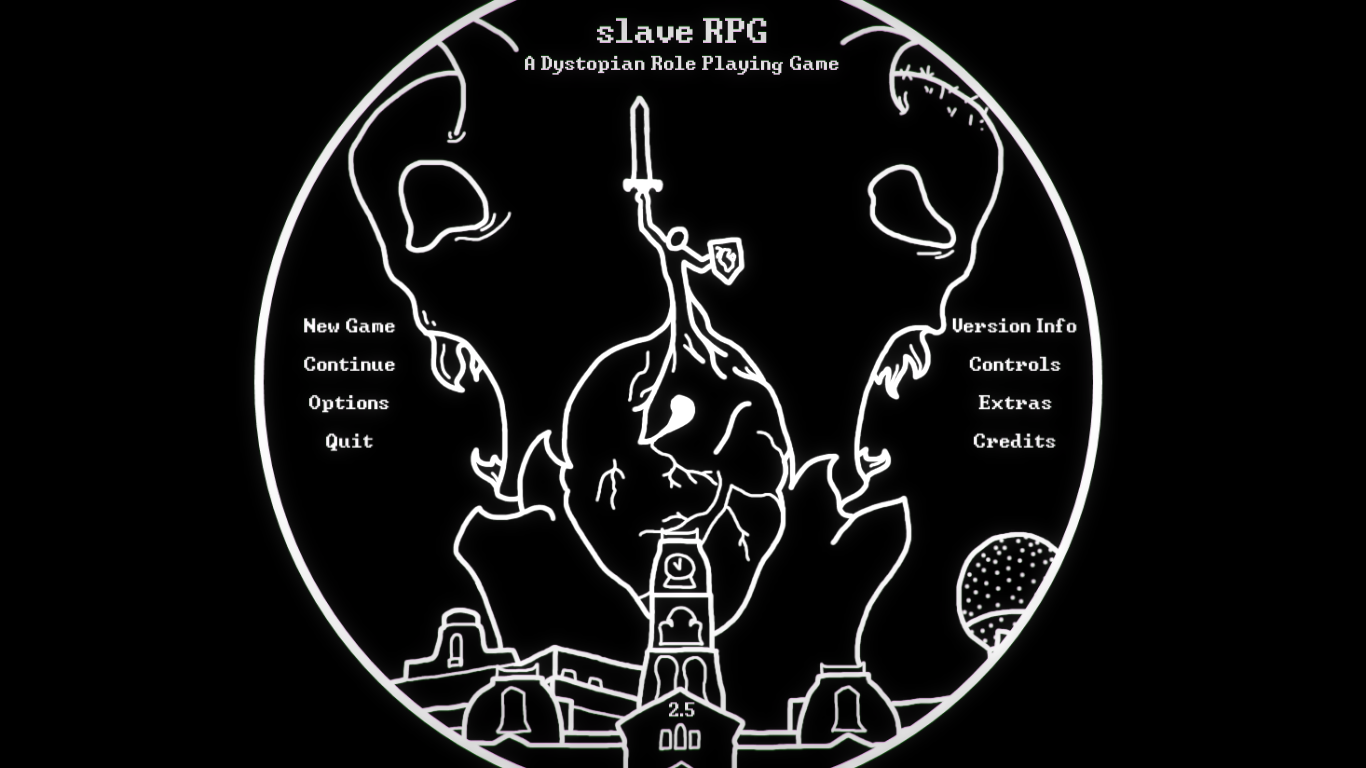 As per the name of the game and descriptions of it, this is a role playing game based on the focus of the player playing as a slave. More specifically, and a bit more accurately, the player plays as an indentured servant, but "indentured servant RPG," doesn't have quite the same ring to it. The player starts the game as a slave in a distant dystopian future that plays off of the United States housing bubble never recovering after the August 2008 crisis and forcing towns to go to drastic measures in attempts to save themselves. This inevitably lead to a war and the recreation of nuclear weaponry for the first time in many years, in the end leading to a typical apocalypse. The player's starting objective is to clear their debt, however once gaining freedom the player then has many more choices that they can make in an attempt to shape this new world. We didn't want to restrict any gameplay aspects we had worked on in our last project, Angels That Kill, so while this game is not story focused, some actions will still have a play on the endings that are unlocked.

At the start of the game, as with any traditional RPG, the player has a set of choices to mold the character to their liking. With any video game including a level of radioactivity through nuclear warfare, we wanted to include a set of races that would reflect the conditions of the affected offspring. We attempted to not stray too far down the mystical aspect of things, and instead focused on the slight physical changes that could occur in this situation. The majority of the races (Humans, Dwarfs, Half-Pints, Orks) can be boiled down simply to their physical size, although the last two races (Lich and Mutants), are based on the extremes of radiation poisoning and include strong negative characteristics because of it.

As well as being able to select a race in the start of the game, the player can also select a previous occupation that acts similarly to a class system, although the occupations here act more as guidelines in affecting any starting stats, rather than a prevalent force that controls player's actions or leveling up throughout the game. Currently we have eight preset occupations to choose from as well as the ability for the player to create their own occupation that they can gain more points to distribute into depending on the total amount of endings they have completed for the game.

Currently we only have two main ways of making money throughout the game, although we do plan on expanding this in the future to include personal NPC quests and more overall jobs. Right now we have what the game was originally built off of in the original batch version which is the Arena, a place where the player is able to battle various enemies in numerous tiers to gain increasing amounts of currency. We have also set up a mining job that acts as a small minigame and can be upgraded over time.

Playing as a slave is not without its disadvantages though, while the player can work their way up through the arena ranks, the player still have to pay for some of their actions that they do. From saving, to eating, and to resting, the player will have to pay any time they need to sustain themselves until they are finally able to clear their debt. 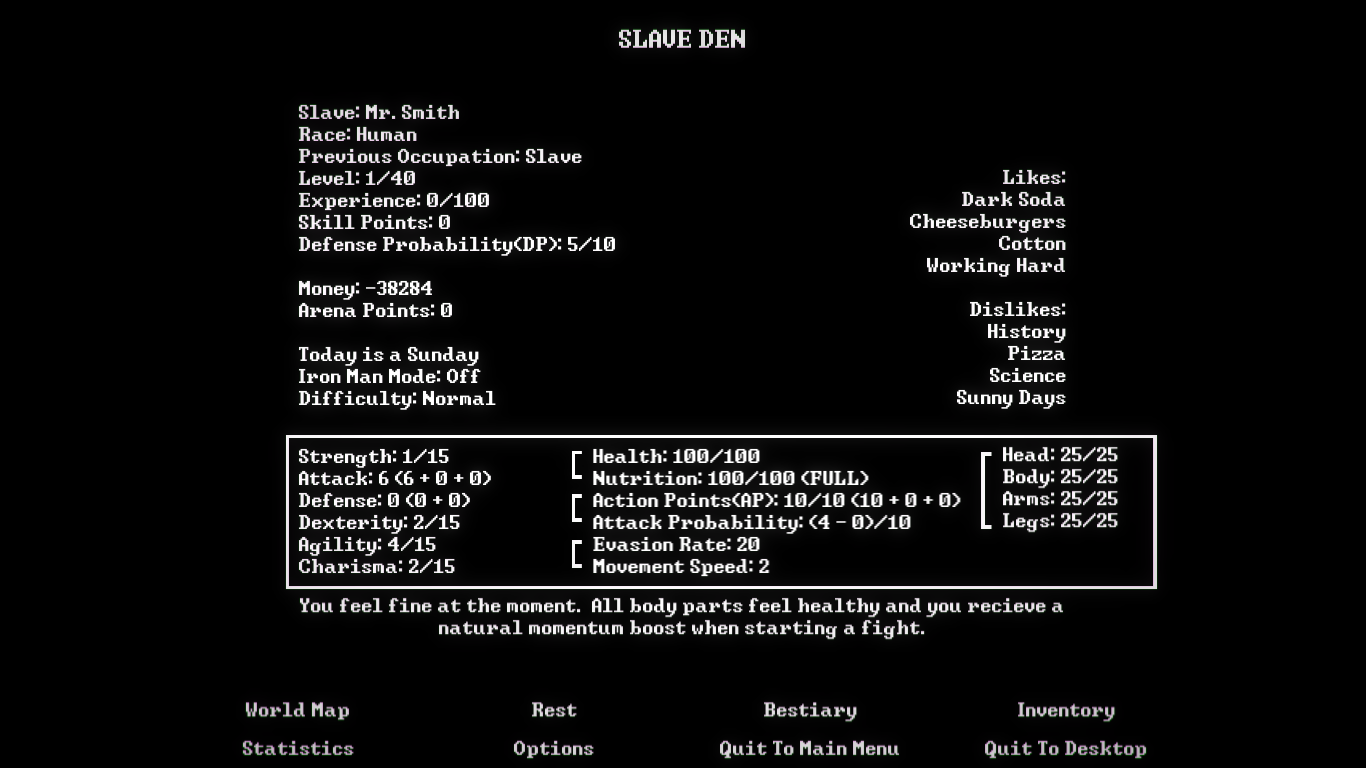 We have also set up a six stat system similar to DnD that is broken down and determines the player's overall well being.

Per level the player will receive a set amount of skill points which they can use to level up the characters stats, the total amount the player can have for any stat is maxed at twenty with each race having its own cap for each stat. Humans acting as the basis for all other races will have a set stat max of fifteen for each stat.

Currently there is no placement for a luck stat, and while a lot of other role playing games have, this is intentional. We didn't want to the player to have an overwhelming ability to talk their way out of certain situations, or be able to gain masses of gold off of gambling since that would ruin the purpose of the game. 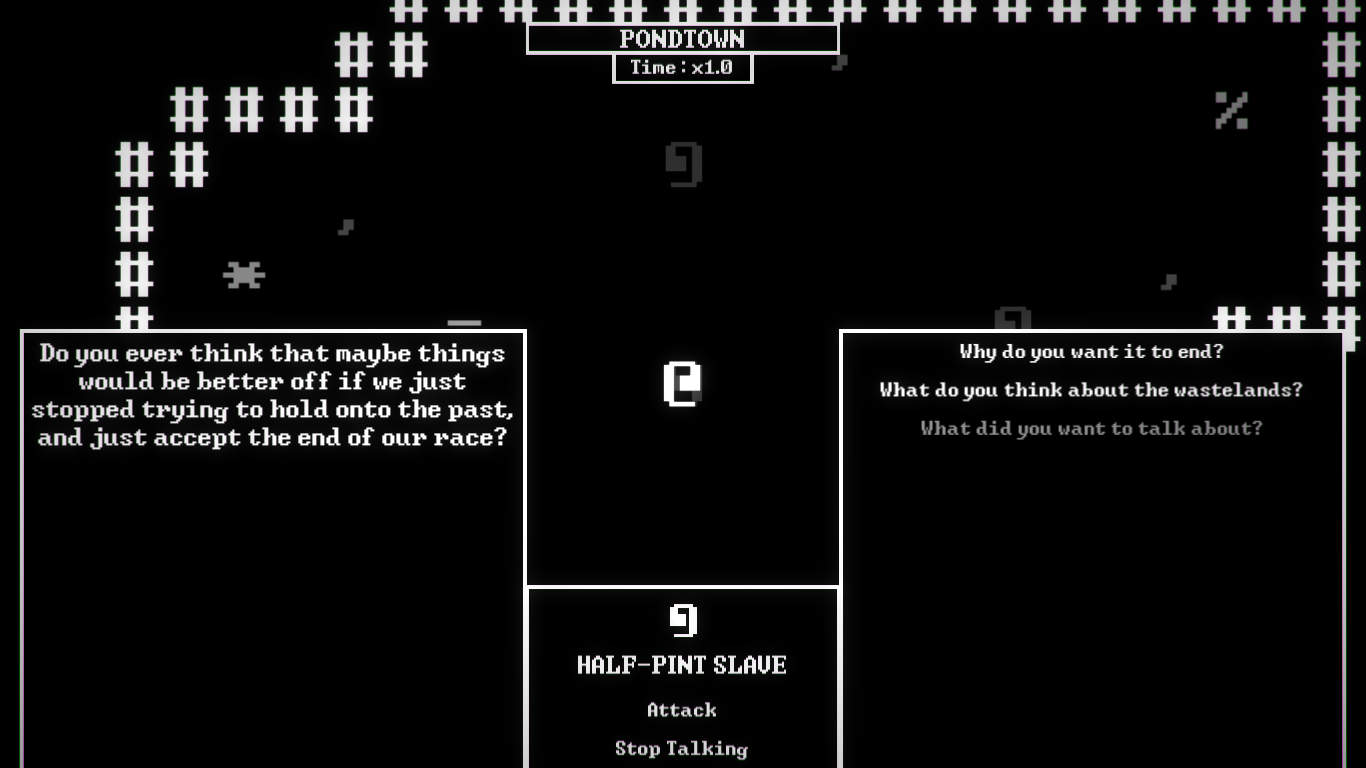 A relatively new feature that we have developed for this game is our momentum system, which builds attack points for both the player and enemy based on the amount of consecutive attacks either party has had. A successful attack will result in an additional momentum point, while successful critical attacks will result in two additional momentum points. This allows a standard attack of five to climb well over 20 if the player has enough consecutive attacks, but this also means that if the player's defense probability is too low the enemy could also gain a mass of momentum points and overpower the character very easily.

While the player's attack probability if based on their total Dexterity, their defense probability is based on the type of armor they currently have equipped. Originally we wanted the player to be able to level up both stats, but it quickly allowed the player to become too overpowered by hitting nearly every time while the enemy missed nearly every attack. The heavier the armor the player has equipped, the lower their defense probability will be, but the higher defense they will have. This will lead to the player needing to carefully plan out their equipment and player progression in order to gain high ranks in the Arena.

We wanted to add a bit of longevity to the game that we couldn't with our previous project so we have added native mod support to slave RPG. While this isn't anything new we don't see many modern games allow players to directly change the files used in games anymore, and we wanted to allow that amount of freedom for you guys. We also know that the graphics at the moment are absolutely nothing to be impressed by, and while we don't necessarily want the game to look the same by the time we are done working on all of the mechanics and features, we hope that this will allow some players to change the game to their personal liking.

We want to remind everyone that this game is still very much in development and that all the work we have put into it so far has been in our free time over the past four months, anything talked about here could very easily change or be expended upon by the final release. We are starting private testing and hope to have some sort of beta demo out for public release sometime soon for more direct feedback.

Thank you guys for all of your support and have a good day.