The Skyward Collapse OST is very different from other soundtracks that I've composed for our games. To start with, this is the first soundtrack that I've co-composed with someone else. Ted Hardin is a good friend of mine, an incredibly talented guitarist, and a master of melody in my humble opinion. By that I mean that with even with the most simple chord progression, he can wield some unbelievable themes and melodic lines. Collaborating on this album was a lot of fun, and also opened up my eyes to a genre of music that I haven't delved in too much. Because the game is focused around building, we wanted the music to emulate a very relaxed and calm environment. Much like the music of Sim City or even Sword & Sworcery, we wanted a laid back atmosphere for our players as they create their realms. In order to accomplish this, we decided to have a lot of the music based around the acoustic guitar (a fantastic suggestion from Mr. Arcen himself, Chris Park).

Along with that acoustic, relaxed feel, Ted and I also wanted to relate the music back to the basic themes of the game (it is a game soundtrack after all). So, as you can see from the titles, and from hearing the music, we brought in the Norse and Greek elements throughout the soundtrack and fused those themes with our relaxed, acoustic genre. 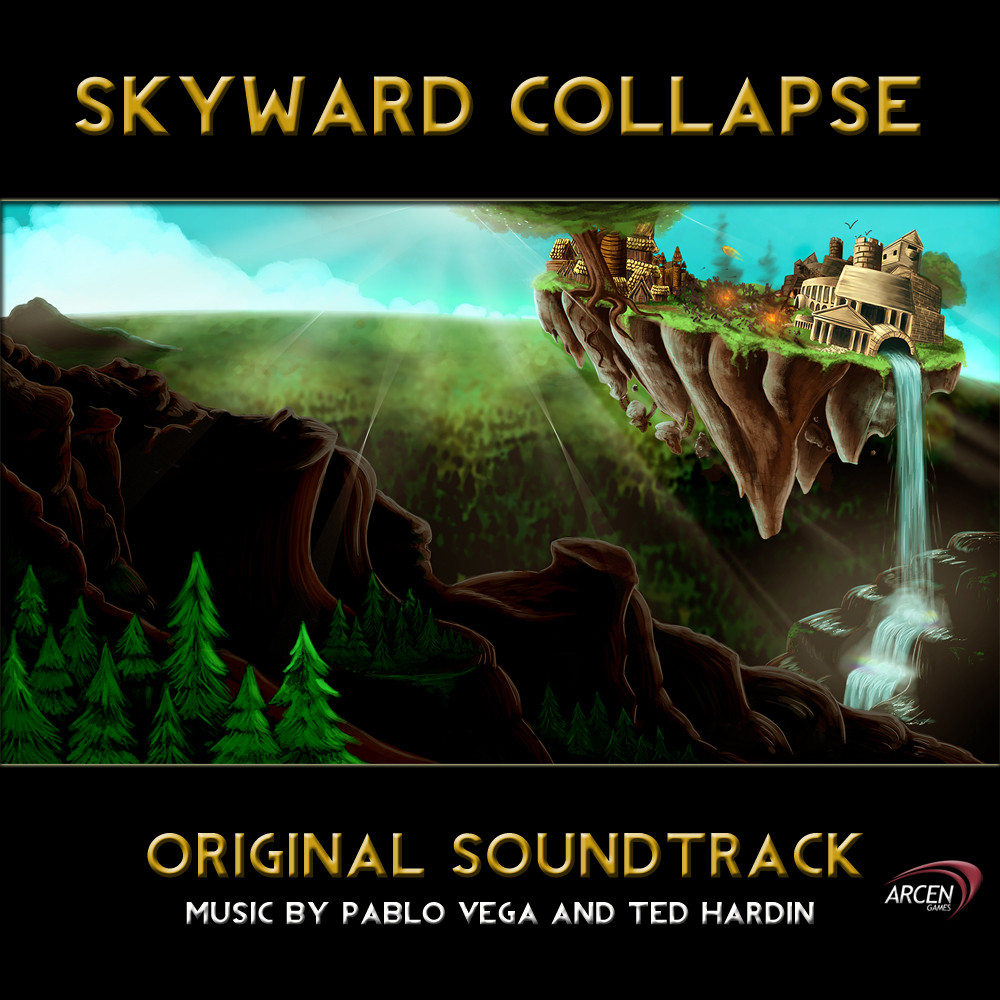 Skyward Collapse Theme
The main theme of the game is based around text from the "Hávamál", a collection of Old Norse poems from the Viking age. The poems are said to be the words of Odin, presenting his people with advice for living, proper conduct, and wisdom. The particular passage that I chose is one of the more famous passages from the collection: (see blog post)

This passage worked perfectly for the theme. When reading it, all I could think about was a viking warrior about to go to battle, and these words being his final prayer. With that in mind, I composed the theme with the lyrics sung as if they were the warrior's last lament. I did research on the pronunciation of the old words, and recorded the vocals (they should be pretty accurate).

The Arrival
For the last few years, I've had an intern from the local high school Durham Academy. After the seniors at DA finish their AP Exams, they have a week or two to do an internship in a field that they're interested in pursuing. This year my intern was Austin Mack, who will be attending Northeastern University in Boston to get his to degree in music composition and technology. He also happens to be a talented violinist, so we recorded the main melody of this piece with him on the violin. (Last year my intern was Jared Anderson, who is now at Berklee College of Music getting a degree in music technology. He recorded the electric guitar on the A Valley Without Wind 2 OST).

The Arrival is supposed to be the player's introduction in to the world of the game. The feel for this intro was inspired by the amazing wallpaper art for the game created by Daniette "Blue" Wood. That same wallpaper is on the cover of the OST.

Stages Of The Day Tracks
The next four tracks are based around different times of the day in the game world. From morning until late at night, we wanted to compose pieces to paint a picture of these various time stages. These tracks introduce the main feel of the game, with the focus around the acoustic guitar, and our relaxed building-game music genre. Ted really outdoes himself with the guitar-play.

Rise And Shine - We start the piece with some bells to represent the disappearing of stars. The strings that kick in represent the rising sun and the start of the new day. The guitar adds the rhythm to the track and creates the feel of waking up to a sunny day overlooking rolling fields.

High Noon - The guitar does most of the magic in this piece, creating an almost "western" sound. The synth pad in the intro and throughout also adds depth and helps create that feel of the midday hot sun beaming down.

Afternoon Stroll - The laid back guitar in this creates that "afternoon stroll through the fields" feel, along with the bongos playing quietly in the background to add a little motion. The bells creeping in represent the sun going down and the reintroduction of the stars.

Late Night - This piece was our homage to midnight, quite possibly the most creative time of day for any musician. So, we found our tempo, hit record, and let the late night creative juices take over. Most of this was improvised on the spot, with a few things tweaked here and there and overdubbed. This is one of my favorite pieces of the whole soundtrack.

Norse Summer, Greek Winter
In any realm of composition, opposing themes are always a cool idea. In this case, since the game is the Norse vs. the Greeks, what better way to pay homage to that then to have opposing themes from both sides. The Norse Summer theme is basically all Ted on the guitar. We recorded the background guitar first, and then overdubbed him on the melody on top. 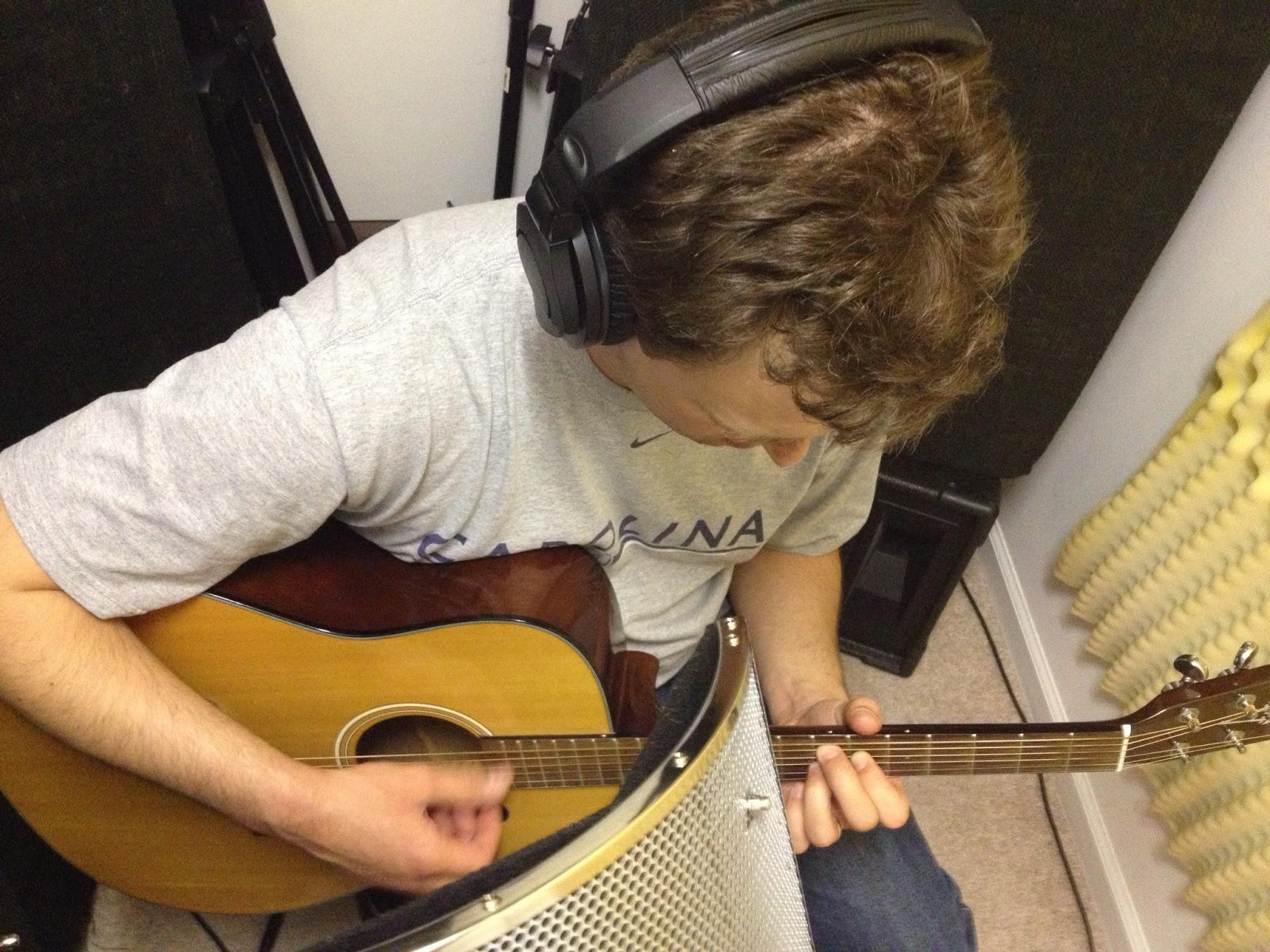 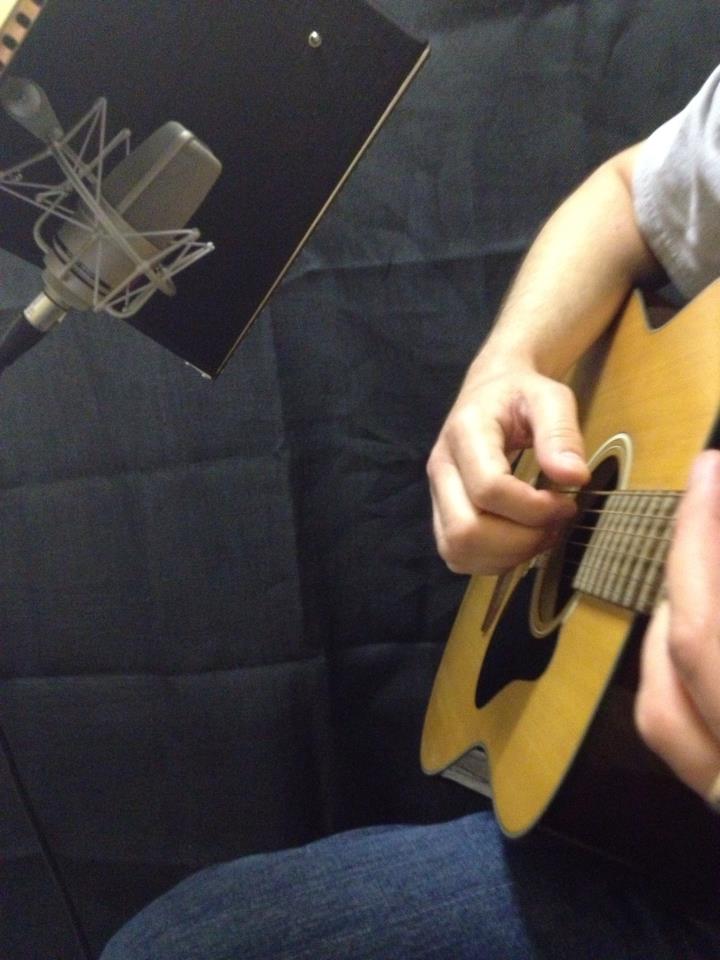 The Greek Winter track is the complete opposite of the Norse Summer. As opposed to having a lot of motion in the backgrounds with a fluid melody, the piece is stagnant (almost cold sounding). We added the drone in the background to represent emptiness and almost a chill that passes slowly throughout. The guitar on top is based on Greek bouzouki music. Very free-form, devoid of tempo, and almost haunting in spirit.

The Architect
The Architect was my version of the city-building music you hear in games like "Sim City" (hence the name). Simply put, it's just feel good music that grooves and gets you excited about creating your realm. It's very happy in nature and a good addition to a laid back soundtrack.

Motion Tracks
The last three tracks were all composed based around the idea of motion.

Running In the Sun - Starts with a fun, in-your-face percussion, almost like the ticking of an old clock. Ted's rhythm guitar really gets the idea of motion going, and then the introduction of a moving percussion helps solidify it. This track is was a lot of fun to put together!

The Earth And The Sky - While the earth is our rock, it is in constant motion. The way it moves with the sky was a really cool notion to play with. So for this piece, the interweaving of the background guitar with the melody represents this idea of the earth constantly moving, counter to the motion of the stars, the sun, the moon, the clouds, and sky.

Follow Me Down - For this piece, we thought about motion in terms of gravitational pull, but on a more human level. The earth's gravity pulls us down, but people also gravitate towards each other. We tried to represent that by having the guitar being the "instigator" in the music, and having the piano counter its melodies. This track is probably my favorite as Ted and I really got to play around with the push and pull of the music. Much like how people pull each other in, music can ebb and flow in a similar fashion.

Be sure to check out the soundtrack on BandCamp, or pick up a copy of the game to get the music in real time. As always, thank you for your continued support!
Pablo VegaComposer & Lead Sound Designer, Arcen Games