A wonderful array of news from my own procrastination to information on the Alpha Release, and the 'completion' of the Skill Engine.

Oops, so it's been almost a month since the last update, and not to mention I missed the deadline I was aiming for for the alpha release. Apologies. I blame Christmas, work, (*cough* the Steam Winter sale *cough*), and all sorts of other things that are all probably my fault in the long run. Sigh.

Anyway, time for a much needed update I think. And it is rather a large update really.

So yes, this is the big progress. As I said weeks ago, the skill tree is the most complicated and time consuming part of the game so far, so I'm pleased to say that 2/3 of it is now complete! I give you, the agility and strength trees: 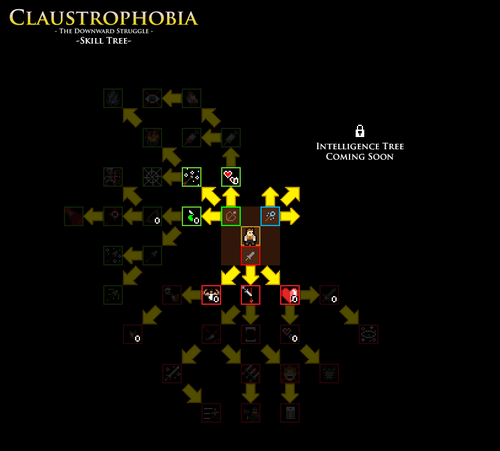 The agility tree took much longer than anticipated, mostly down to the addition of a number of utility skills (like traps and invisibility), which were not originally programmed into the main engine, and required a rework of the whole skill system. But the game definitely benefits from them.

Due to the time it took to complete the agility tree, and the fact that I missed the alpha deadline, I've decided that the alpha will be launching without the Intelligence Tree, in order to not delay any further. It is, after all, an alpha, and is meant to give a taste of how the game will be running once it is complete. There is more than enough content already to keep agility and strength builds interesting. Intelligence will be making an appearance in the first major patch after launch.

After launch, major patches will be released hopefully once a month, possibly more frequently. I will be looking to you guys (the players), for what you want to see changed, added, removed, or amended each patch on the forums for the game, which will also launch at the same time as the alpha.

Claustrophobia's composer, Chris, has now completed two of the main tracks for the game, which are sounding brilliant. Both pieces fit the atmosphere of the game extremely well, so keep an ear out for music as you venture through the dungeon.

It's getting very close to alpha release now. Everything is now falling into place nicely, so keep an eye on my Blog, Steam, and Desura for more information leading up to the launch. I'm looking forward to sharing Claustrophobia with everyone.