Today we are showing off the SA 34 anti-tank gun, the most common such weapon in the French arsenal in 1940. We would also like to thank everyone who voted us into this year's Top 100 mods.

Today marks the eve of Forgotten Hope 2's 13th birthday: version 2.0 was released on Friday 14th December 2007. Since then we have also managed to have 13 major updates, and we are still here working away at number 14 for you.

In other good news, we'd like to thank all of you who voted for us in the first round of ModDB's Mod of the Year awards. We have successfully made it into the second round, and would appreciate your votes once again.

So with all of that out of the way, today we thought we'd show you yet another weapon that you will be able to use against the incoming panzers in France. 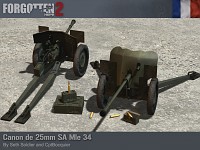 France was one of the major users of the tank in the First World War, and while the Germans never were able to catch up some thought was still put towards developing something that infantry in the front line could use to defeat attacking tanks. Two ideas would be prototyped, a 13mm anti-tank rifle and a high velocity 17mm gun that could use the mount of the existing SA 16 37mm infantry support gun. The armistice put an end to this experimenting, but the idea of a high velocity low calibre gun remained.

In 1926, Hotchkiss presented the army with a 25mm anti-tank gun on a light portable carriage. It would take until 1934 after extensive trials and the threat of German rearmament before it would be adopted as the SA 34. It was a very small and portable gun, weighing only 490 kg total, and could easily be manhandled by its 6 man crew into all sorts of unusual positions. The 25×193.5mmR ammunition was potent, and could easily deal with any German tank in 1940 out to 500 metres or more. There was only solid shot available, either with or without tracer. The main downside of this low weight was fragility - it could not be towed at more than 15 km/h.

There would be a couple of variants made: the shorter barrel SA 35 for mounting in vehicles and an even lighter weight SA 37. In total, about 6000 were made, of which 300 were traded to the BEF in 1939 in exchange for Boys anti-tank rifles. Finland also ordered 50 during the Winter War, though only 20 arrived in time to be used. They would buy 200 more from the Germans before the Continuation War. They would continue to serve with various Axis powers and the Free French up until about 1943, at which point they were generally discarded as being totally outclassed by newer tank armour. Our SA 34 was made by Seth Soldier. 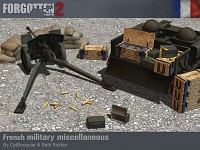 Finally today we can show off another render featuring more of the little miscellaneous statics that will really help to bring our French maps to life. CptBocquier made the 25mm ammunition and boxes and converted Kraetzer's UE into a static, while Seth soldier made the 7.5mm ammunition boxes and the SA34 gun.