The Sith Academy on Korriban was a facility in use during the Jedi Civil War, dedicated to training Force sensitives in the ways of the Sith, and running archaeological projects in the Valley of the Dark Lords. 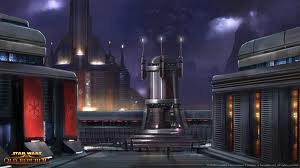 The exact time of establishment of the academy is unclear, though it was probably founded sometime during the Great Sith War by the Brotherhood of the Sith and continued its existence even after the defeat of Exar Kun; it was in full operation as of 3,993 BBY. Strangely, the Jedi Order seemed to have been aware of the academy's existence and yet never took any action against this dangerous threat, despite the existence of organizations such as the Covenant devoted to eliminating dark siders.This is our Empires greatest Source of Power defend it with your lives

Entrance to and life at the Sith Academy was difficult. To be admitted, prospective students were required to impress one of the teachers or students who was already in the Academy, receiving as proof a medallion, or to kill a student and take his or her medallion. Fallen Jedi usually did not have much difficulty in gaining admission, because they had already been trained in the ways of the Force. Prospective students were forced to compete against each other in a group; one would gain enough prestige to impress the headmaster and become a true Sith.

On Completion of your training in the Academy you are then allowed to select what master and Sith Traits you fall under. You can check this out here Moddb.com

Perhaps we might just destroy your academy this time ;)
xx

You can never destroy the sith

yes you have tried before and yet we endure.

your not on the list for a reason i will tell soon!

can i be in the academy

oh sorry calo there is only room for one HAHA

thats not your desicion calo_mandalorian,

as for Calonord99, are you sure you want to enter? training is gonna be tough and as a mandalorian, i have developed a tolerance for pain therefor i i do not show mercy for any who claim to be in pain. during your time at the academy, you will be subjected to endless pain, suffering and some students have died in training. this isnt the marines or the french forieghn legion, this is the sith academy and if you arnt the best of the best, you will die. the only time you'll get a break from all the gruling phyisicle training exercises is when you study sith history, alchemy, and religion.

i shall take it up with the Dark Lord than

delta is right. since i am a spartan i can take a lot of pain

the sith will live forever

Note not in corporeal form but as spirits haunting technologically advanced stone tombs!

indeed but iv seen sith immortals retake the form of the living by possession.