As well as launching SlideDB.com we launched tons of fixes and updates.

The biggest news for us was of course the launch of indiedb.com however with it came a bunch of cool little updates which are worth mentioning now. Firstly a very much requested fix was the ability to upload videos from Youtube.com. That is now working again. New features are.

Previously, when you viewed a games rank on say Desura, IndieDB or IndieDB it was competing against every other game, even the triple AAA's and non mobile titles. Now ranks are only split up site by site, which fixes up buttons as you can see below.

For advanced users, we have a custom feed containing all games on Desura and their price (and sales price) in all currencies. If you run a site such as IsThereAnyDeal.com we recommend you use it to track specials.

Now when we display reviews in profiles we also show the highest / lowest rated, so at a glace you can see what the fanboys / haters agree with the most. 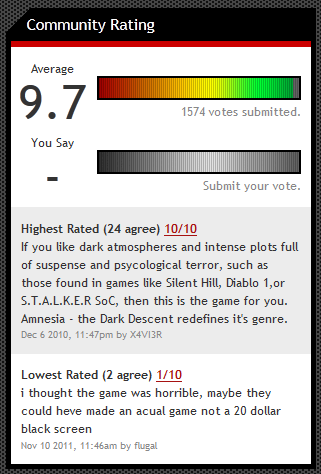 Finally, because we have finally started supporting mobile games officially - we needed to bump up the icon resolution to support app stores and their big app icons. So when adding or editing your game, you can now submit high res icons (i.e. 512x512) and our system will automatically resize them for use.

Really nice!
I really like that you add even more important and nice content!
Great work, 'cause of you indie development reached a new and even higher level!

It sure does. Scott and the rest of the team of DesuraNET are true pioneers.

Love these updates! Finally my indie games aren't measuring up against the super awesome mods people are making.

Regarding the highest/lowest ratings, do you have to have a certain number of reviews / ratings to qualify for it to show?

need to have at least 2 upvotes.

I was worried for a second when I saw the reset view counts but this is definitely good news.

the next cool thing would be a imagine overview like on steam for better accessibility of older pics :)

Cool, the logo is fun

I wish I could get my game to play, it always says something or other is not installed