Today we're releasing version 0.88 of the Sins of the Prophets public alpha! This update includes balance changes, bug fixes, art asset overhauls, and new ships! A full changelog will be available at the bottom of the post, but I'll quickly go over some of the more interesting updates here. 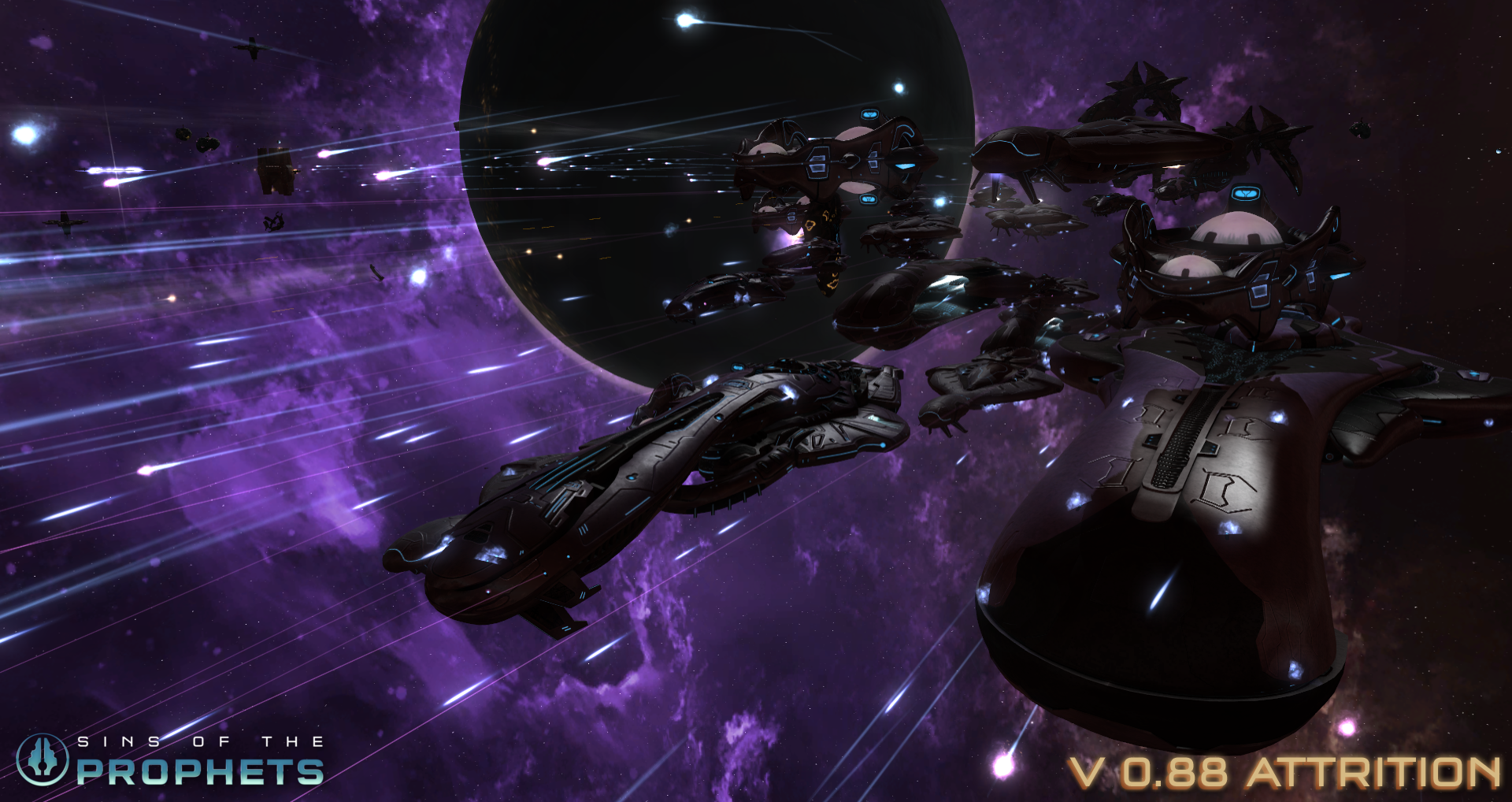 Today we're releasing version 0.88 of the Sins of the Prophets public alpha!

This update includes balance changes, bug fixes, art asset overhauls, and new ships! A full changelog will be available at the bottom of the post, but I'll quickly go over some of the more eye-catching updates here.

Balance tweaks you'll notice include things like the removal of all slipspace nodes from the mod (being able to create new phase lanes between gravity wells) other than the one ability available on the Covenant Assault Carrier, changes to the CDA Battlestation to compensate for this loss of mobility, the Epoch-class Heavy Carrier has seen a buff to its damage thanks to the addition of the Breakwater canons detailed in Halo Warfleet, and the reintroduction of the Phoenix-class Support Ship. 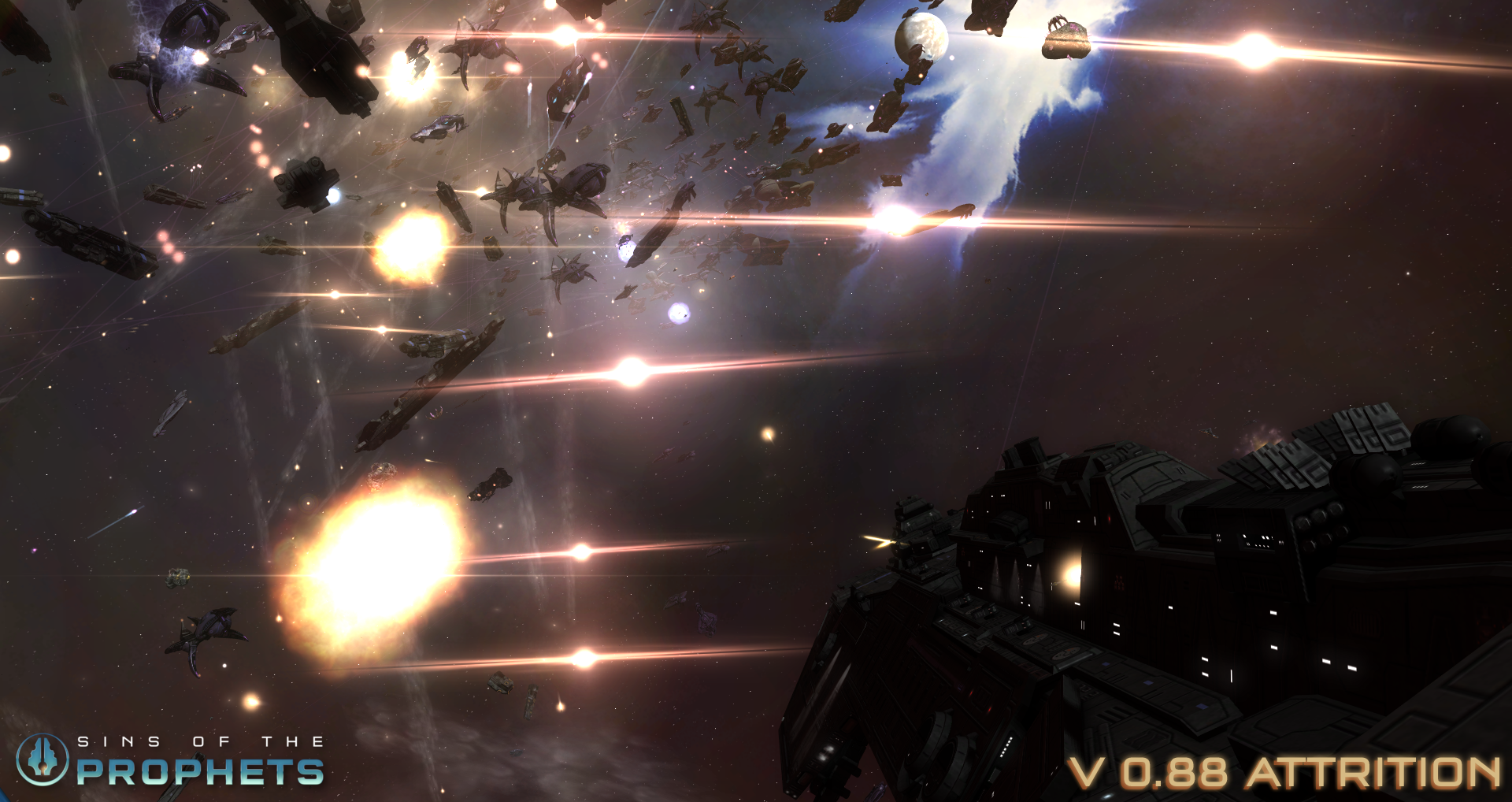 Slipspace nodes were removed from the mod because the hyper-mobility provided to players allowed for extreme stalemate scenarios that caused matches to last far longer than we intended. This is why this released is subtitled "Attrition" - losing battles now has a more substantial impact on the game. Decisions now become more important and failures have more gravity, but players are also able to move on to the next match faster with lessons learned in tow.

For the full list of balance updates check the bottom of the page!

Bug fixes are also detailed in the changelog, but the bulk of fixes this release were attempts to curtail the "darkspace" bug that has plagued the mod for a few releases now. The ability to create slipspace nodes was removed for two primary reasons, the above-mentioned balance concerns, as well as to counter this pretty severe bug where ships would attempt to travel between gravity wells at sublight speeds and effectively becoming trapped far away from either planet. If you continue to encounter this issue please let us know, however the quick fix for it is to reissue the jump command and the ships should immediately slipspace jump to their intended destination. If you run into the bug and have a hunch about what might have triggered your occurrence we're all ears to hear your thoughts.

The art portion of this update is pretty juicy once again! It includes an updated Covenant Assault Carrier model based on the variant you see in Halo: Reach, as well as the DAS-class Storm Cutter and the Gladius-class Heavy Corvette both featured in Halo: Warfleet! Minor updates to various models continues as our artists perfect their craft. You can see beautiful renders of those ships below, as well as a 3D model of the new CAS via Sketchfab thanks to Malcontent1692!
Click the image to go to a larger version. 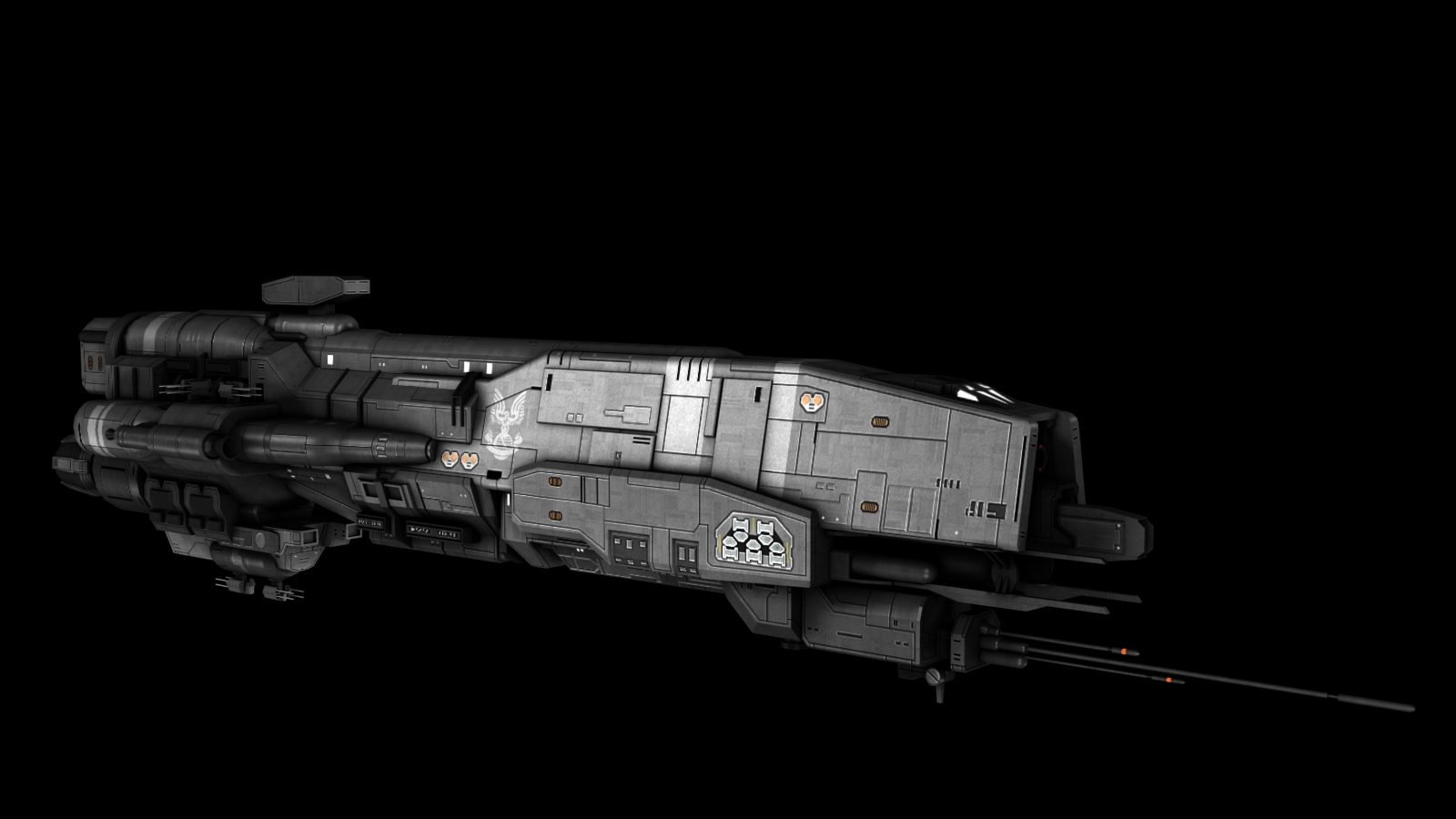 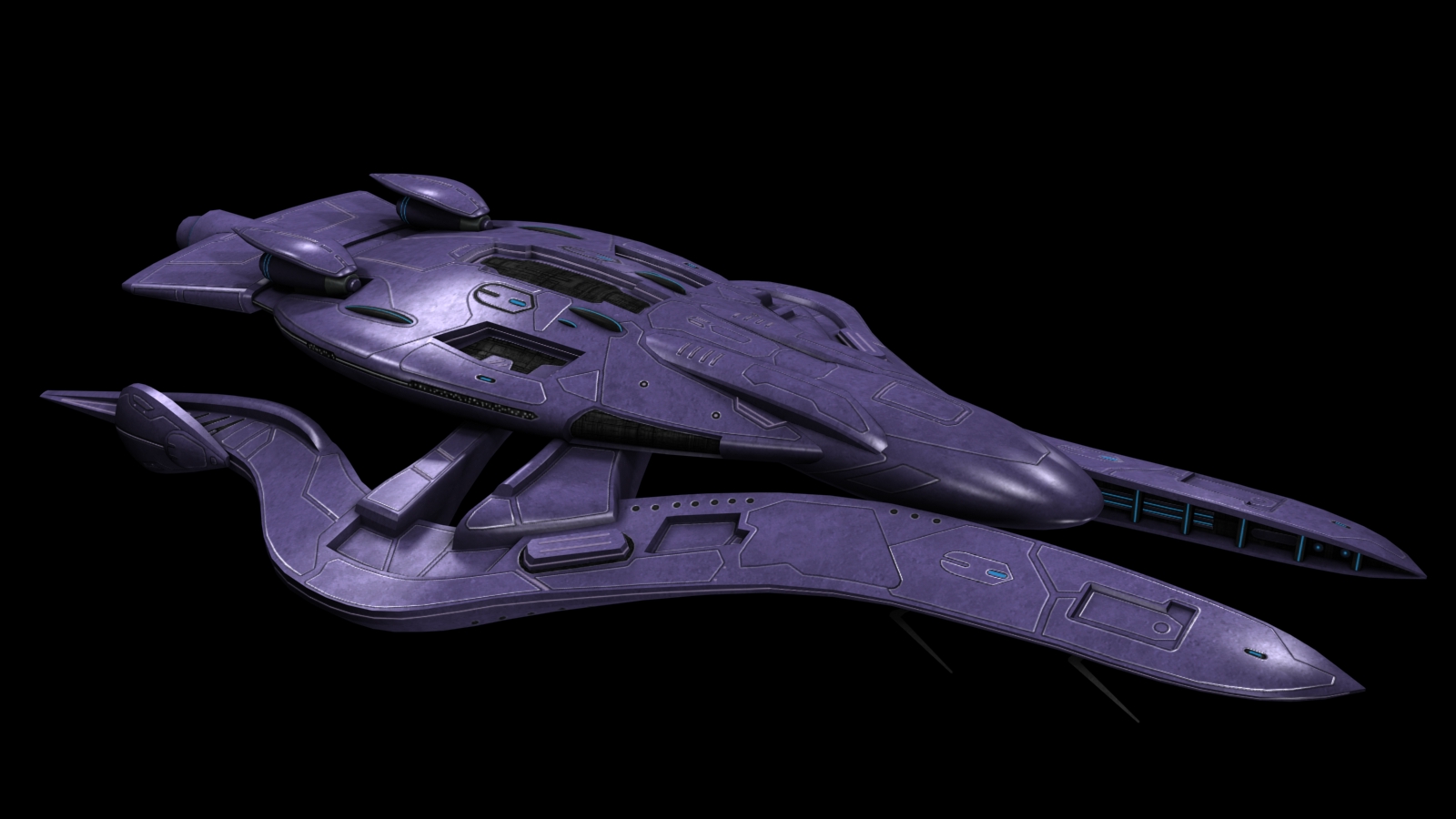 This should be the last major release before we officially move into Beta releases (0.9), where we're feature complete and just tweaking stats. Major features are planned for 0.9, including the implementation of hero ships. We'll detail those changes in dev updates as we progress.

Vote for us in ModDB's Mod of the Year contest!

If you're enjoying the work we're doing please vote for us, it's all we ask in return for this release.

Our full changelog for 0.88

-Removal of all slipspace nodes (barring the CAS) to mitigate and hopefully fix the darkspace issue.
-Reintroduction of the Phoenix-class capital ship to the general fleet, now in a support role.
-New CAS-class Assault Carrier replacing the previous with higher fidelity model and textures courtesy of Malcontent1692 based on the variant seen in Reach.
-The Covenant DAS-class Storm cutter and UNSC Gladius-class heavy corvette have replaced the DAV and Mako, respectively.

-Additional remedies to the darkspace/sublight bug.
-Removed slipspace nodes from the CDA which showed to cause localized darkspace until they were destroyed.

-Update to the CDA to address the removal of slipspace nodes: stronger shields, improved weapon capabilities on all banks, and updated max movement speed to match the rest of the Covenant fleet. (Acceleration on the CDA is still lower than buildable ships)
-Slipspace nodes removed from all except the CAS (this includes the removal of the Covenant’s navigation beacon structure entirely)
-Rebalanced all ships acceleration and deceleration values to mitigate darkspace.
-Epoch-class Carriers now have dual front facing Breakwater batteries buffing its MAC output by 500.
-Covenant capital ship experience gain reduced by 50%
-Stridents now deploy from Infinity by default.
-changes to mines increasing their effectiveness.
-Tweaks to artifacts system.
-Added diminishing returns to trade ports, removed bonus from making trade routes and decreases in effectiveness as more ports are used in the same gravity well.
-Removed turn rate increase from pinpoint slipspace jump abilities.
-Increased Eion hangar count by 1.
-Epoch moved up to the same formation line as the Marathon.
-Eion and stalwart have been moved up one in fleet formations.
-Reduced radius of the OSS ability Strength of the Fallen to 3500.
-Reduced flood “Swarmer” spawn numbers. (This should decrease the lag earlier in flood matches)
-Flood cruiser now carries 2 squadrons rather than 5
-Gravemind spawn has also been lengthened to 15 minutes between new Gravemind creation.
-Removed research effects adjusting Covenant slipspace charge up rates to lower darkspace possibilities.
-Upped CAS Void Beacon ability level requirements to 4 instead of 2.

This question might be stupid, but how do I get the Gladius in my fleet? I was under the impression that the Mako (and therefore the Gladius) was a neutrals-only ship, but then I saw one in one of Idio's pre-release screenshots in a huge battle. Were they just spawned in via dev mode despite not being normally usable?

Its currently just a militia ship, we're hoping to give it some way of being used similar to the strident but its a challenge to find a good spot for it.

question when can we expect the classified faction to be revealed to us?

Pretty sure It's the Forerunners. We probably won't see them show up in the mod for a long, long while yet.

ships would travel along slipspace lanes at normal space speeds

FFS, there's goes all my strats.

Can we build the gladius or is it just an npc ship?