November update for Sins of the Fallen (2014) providing a quick overview of Aliens, Artifacts and other mod related items.

A quick update on the mod.

Updates are in progress Sins of the Fallen isn't sitting idle. Even with the limited updates before the last release, I was working on integrating the new Nephilim models and working on bug fixes. It was just really slow going...

Bug fixes and enhancements
There never seems to be an end to finding missed issues (thanks to many of you) or improvements I want to make ;) Since the last release I've been working on more bug fixes as they are reported or found and working to add in new content as well.

New NPC: Alien Invaders
Alien Invaders, A new NPC, will replace the pirate AI with a completely new look/feel and capabilities (including research available to the pirate class NPC). The new NPC assets will also be available to replace as the Militia type. I really like the idea of an Alien invasion and look forward to turning on this feature as I've never really enjoyed the idea of Pirates. Work continues on these assets and hopefully sometime next year they will be of release quality.

More Artifacts
I talked about Artifacts last year and will unfold a little of what is coming.

Aegis Artifact - An artifact lost in space by a Relic Civilizations. Found orbiting distant gravity wells, this artifact can be installed on Capital Ships or Titans and will grant significant increases in Shield, Shield Mitigation and Regeneration.

The mechanics for obtaining these artifacts and installing them on a capital ship will be fairly painless to both the User and AI.

I've also made some minor improvements to the existing artifacts granting them their own Strikecraft look and feel and will begin work to adjust their stats and weapons layout to differentiate them more.

Continued thanks to everyone for their support and feedback over the many years. It's been a lot of fun making this mod with you. 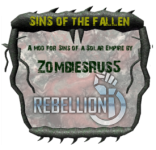 Thanks for all the hard work!

One of my favorite sins mods, always glad to see progress :D