Silent Station: Screaming in a Vacuum, the survival horror roguelike game, has been officially released to several platforms including Windows 8, Windows phones, and Android phones.

After some months of struggle (not to mention producing and releasing a completely separate game in the meantime), Silent Station: Screaming in a Vacuum has finally been released to multiple platforms. From conception to delivery, Silent Station has evolved from being a simplistic horror toy to a richly featured survival horror roguelike. I'm very proud about the end result of this long development journey.

Naturally, with ongoing development wrapped up, that can only mean that the promotional phase of the project is in full swing. That in turn means cool new media, like this hot new release trailer:

Two fantastic artists were commissioned for character design work during the production of Silent Station, which greatly helped to bring the overall artistic quality of the game a long way from the placeholder programmer art of the early alpha builds. As you can see, the completed revision of the player character's design looks very sleek, bright, and futuristic:

By contrast, the designs of the deranged space station enemies are much more frenetic, dark, and rustic looking:

All of this artwork comes together to provide the moody, intense atmosphere of the game that will hopefully keep players feeling hunted and unsafe. 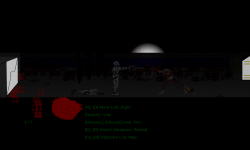 The development of Silent Station, being only my second full game, has been a great learning experience for me. Stay tuned for a detailed postmortem analysis which will include all the little lessons I learned throughout this development effort.

Silent Station is available now on all Android devices, Windows phones and tablets, and Windows 8 desktops.