Today we show off the main French landmines that equipped the infantry and cavalry in May 1940.

Today we are showing off a pair of French landmines, the perfect weapons to use on the defensive. 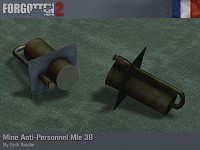 In early September 1939, the French launched an offensive into the Saarland in support of the Poles. French soldiers soon came across the 1935 S-mine, which quickly gained a reputation as "The Silent Soldier". Work began immediately to develop a copy. The new design used a 60mm mortar bomb as the projectile, launched by a blackpowder charge from a large tube that was connected to the fuse mechanism. It could be either triggered by pressure or a tripwire, and would jump up to chest height before detonating.

The blueprints for the Mle 1939 would be taken to the USA after the fall of France, and there became the basis for the US M2 anti-personnel mine. Our Mle 1939 was made by Seth Soldier. 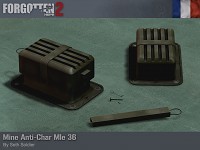 This anti-tank mine was designed for issue to the infantry and cavalry for use in the field, though was also provided with holes for tie down bolts in fortress use as well. Provision for an anti-tamper explosive was provided in a cavity on the underside. Only 80,000 had been delivered at the start of the war, with only 440,000 mines of all types available at the start of the invasion. Many of these mines were captured by the Germans and used in North Africa. Ours was made by Seth Soldier.