This update is intended to add some flavor to the world and make it feel a bit more lively. We’ve added several new creatures to the upper parts of the world, particularly on the surface of the far side of the planet as well as relatively shallow underground. We’ve also added some new areas to explore (and a new boss) that are related to the new creatures.

This update is intended to add some flavor to the world and make it feel a bit more lively. We’ve added several new creatures to the upper parts of the world, particularly on the surface of the far side of the planet as well as relatively shallow underground. We’ve also added some new areas to explore (and a new boss) that are related to the new creatures. You will need to generate a new world from the sandbox menu or create a new character to see much of the new content.

Here are a couple of the new creatures:

In addition to the new creatures and related content, we added a bit of story content and changed some of the existing progression a bit. We added a new button on the Pioneer Station comm device (the device that requires the battery on the top floor) and there is a new satellite dish on top of the Pioneer station, but it seems to be missing a component… 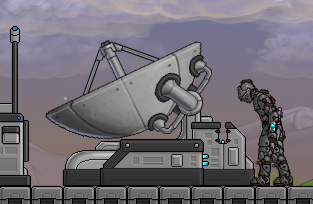 We also changed the method of obtaining the Level 2 keycard upgrade - The upgrade device is now found in the captain’s room in the Pioneer Station barracks. This update is fairly light on the direct story content, but the next update should expand on the story and the mysteries of the planet quite a bit.

We re-worked the cooking/food system quite a bit. Prior to this update only a handful of food items had buffs associated with them, but in this update we’ve added buff effects to most of the foods. All fruits, mushrooms and meats now have buffs that you can get by eating them. In previous versions, you’ve been able to cook food by using the crafting menu, but now cooking is done similar to how ore is processed. We’ve added pop-up menu when you right click the campfire, and you can both cook food and process ores in the same devices. 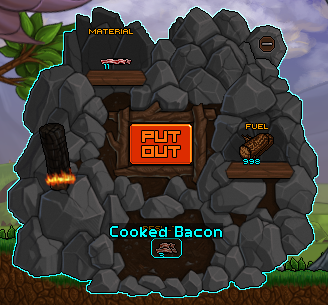 The campfire has just one slot for ingredients, but the brick oven and advanced smelter both have 2 slots, which allows you to combine some food items to create new recipes. For example, a Juicy Fruit will give you a heal over time and a sporepod mushroom will temporarily increase your max health. Both items will fill 1/4th of your stomach, but if you cook them together you can make a food item that will give you both buffs and still just fill 1/4th of your stomach. You can also cook a fruit with a plant fiber to make Fruit Chews, which give you longer lasting buffs that fill less of your stomach.

Some of the new creatures can inflict a bleed status effect on you, so we added Primitive Bandages (can be made with plant fiber) and Cloth Bandages that can stop the bleeding status. In addition, you can add some medicinal herbs to the cloth bandage in order to make a Poultice Bandage that heals you. 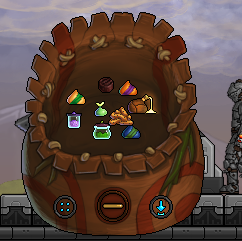 All of these recipes are obtained by destroying matching projects that are in the world with your wrist laser.

Most of these new status effects are currently attached to various food items.

This update adds quite a bit of new bits of content and changes, so let us know if you run into any issues and we'll fix them ASAP. As always, we encourage any feedback you folks have about the new content (or any old content). We love hearing from you, so don't be shy =)