Sicarius was originally created as an entry for Ludum Dare. However, since then, a significant amount of progress has been made. In this article, I will go over these changes as well as some of the future plans for Sicarius, a fast paced action stealth game.

It's hard to believe that after just a couple weeks of improvements, so much progress has been made on Sicarius. It started off as a glitchy little game made for Ludum Dare. Guards had little AI and walked around until they hit walls. Now however, guards will go to predefined locations searching for intruders.

"You are the Villain"
Unlike other games, in Sicarius you are the villain. Or rather, a man forced to become a villain due to circumstances beyond his control. After being kidnapped by a sinister organization, the once wealthy and happy Aemulus must now become the evil Sicarius. As Aemulus, you will have to complete missions for the organization in order to return to the life you once had. Levels so far are fairly basic, and range from killing all guards to getting to an exit undetected.

Features
So far, there are a couple of defining features. As Sicarius is a stealth based game, it is important to include a penalty for being caught, so that the player does not blindly rush through missions. In some missions, getting caught will result in a failure. However, in most levels missions, stealth is not the only goal. Aemulus is equipped with a small knife, which enables him to eliminate guards, although he can not fight back while detected. The Sicarius suit also comes with a number of abilities that will help Aemulus through the missions. While using "Focus Mode", Aemulus can see the paths that guards are moving on at the moment, and use it in order to ambush them. Additionally, guards and bullets are slowed down in focus mode. This enables Aemulus to effectively dodge bullets if detected, and run for cover. Focus Mode, however, will eventually run out and must be recharged.

An important aspect of Sicarius is making the guards act intelligently. At points, guards will stop and have conversations with each other. This gives you a bit of time to slip by undetected, but killing a guard while in conversation will alert the other guard. Once alerted, guards will attempt to shoot at you, and will alert any other guards they pass by. Some levels also have an "Overseer". Overseers are in charge of all the other guards in a given area. They will call out the names of guards, and expect a response. If they don't get a response, they will assume the guard has been killed and go to where the guard was last seen. Corpses stay on the ground after a guard has died, so it is important to move them so that the other guards are not alerted. If an Overseer becomes alerted of your presence, they will alert all guards, making it crucial to eliminate the Overseer as soon as possible. 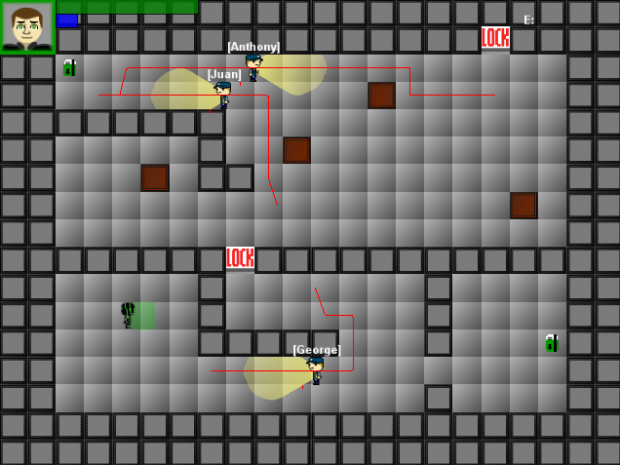 Aemulus while in Focus Mode.

Story Based
Although the story portion hasn't been worked on much yet, it is important for us that Sicarius is based on a central story, rather than random and thrown together levels. Although the story can be ignored, it will be the central focus, and missions will be based around the story.

Sicarius is still in early development, but if you are interested in this, please track us here on IndieDB! You can also follow TeamQuadratics on Twitter, at Twitter.com. As time goes on, more information will be given about the game, as well as gameplay videos.

Thanks for your support as we embark on this new journey.
Team Quadratics